Virgile’s Vineyard, A year in the Languedoc Wine Country 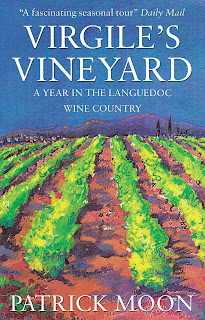 Virgile’s Vineyard was first published in 2003, and it has stood the test of time, providing a very accessible introduction to the wine culture of the Languedoc.  Patrick Moon relates a year in the life of a young wine grower, Virgile Joly, who after working elsewhere in France and overseas, has bought a vineyard and is intent on creating his own wine estate.   And Patrick, newly arrived in the Languedoc, is keen to learn about the region’s wines, and so he shadows Virgile’s work for the year, from pruning to harvesting to bottling, and everything else in-between, including covering one of the big issues for any new wine grower in the Languedoc, how and where to sell your wine.    He sympathetically relates the trials and tribulations of a new wine grower, when things go well and not so well.

Humour is provided by Patrick’s encounters with his neighbour, Manu, a caricature of the archetypal French paysan, who enjoys consuming vast quantities of wine, in sharp contrast to his extremely abstemious wife – I am not sure that we ever learn her name.    Manu is game to be Patrick’s guide for any cellar visits further afield, so appellations other than the immediate surroundings of St. Saturnin are covered, with visits to wine growers who are still important in the region.  And a sense of the long history of the Languedoc is provided by Krystina, an ex-history teacher and  owner of the local château and another caricature, to provide some more humour.
Since 2003 things have moved on, and the book has been republished, with an Afterword to bring the story of Virgile Joly fully up to date.   And in between Patrick wrote a second book that focused on the food of Languedoc, Arrazat’s Aubergines, Inside a Languedoc Kitchen, about a young chef who started a restaurant near his home village, in which the continuing story of Virgile is also covered.  Sadly Arrazat’s restaurant did not last for long, but the book considers some of the gastronomy of the Languedoc.   And Virgile has now successfully established an international reputation for his wines, most recently with the help of Naked Wines.

Bob Rossi said…
It's a wonderful book. I started reading it shortly after it was published, while vacationing in the Languedoc. While I was in the middle of reading it, we went to a market in Clermont-L'Herault, and then I stopped into a wine shop in town. While in the shop, I saw one of Virgile's wines, and the proprietor said they had the book (in English) in stock. And then he said "Oh, and there's Virgile, making a delivery." Virgile had just become a father the day before (he had married Magda, from the book). So we bought his wine, and eventually drank it back in the US. It was superb. Some of his wines are imported into the US, and they've been spotted here in Maine (his importer is, or at least was, based in Maine).
22 July 2015 at 13:45