Château Guilhem in the Malepère 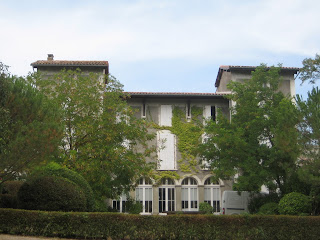 Malepère tends to get overlooked.  It is a small appellation, of just 500 hectares, covering the hills south west of Carcassonne, around the Massif de la Malepère.   Originally when it was still a VDQS Côtes de la Malepère, the regulations demanded both bordelais and Languedocien grape varieties, but since the creation of the appellation, Bordeaux varieties alone are possible. 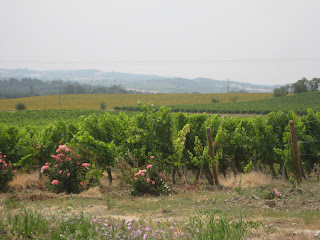 We went to visit Château Guilhem in the village of Malviès, which is one of the older, more established, and also largest estates of the appellation, run and owned these days by Bertrand Gourdou, the 6th generation, with Catherine Montahuc as his winemaker.  She has worked here since 2006, but comes from Burgundy. She showed us round; they have 30 hectares of vines in production, of which 17 are Malepère and the rest produce varietal Pays d’Oc.   Malepère is only ever red or rosé; any white wine is Pays d’Oc. A more recent proposal that a white appellation might be considered was refused by the INAO, with the suggestion that the vignerons of the appellation need first to optimise the production of their red and rosé wines, and that any thoughts of white wine were distinctly premature. 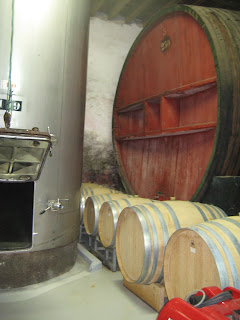 The château itself dates from the 1870s, and on some of their labels they use an old photograph of the family from 1902. Originally the property was called Chateau Malviès, but Bertrand thought that could cause some confusion, and preferred to rename it, after the family name of his grandfather, Guilhem.  In the vineyard they work organically, and the cellar at first sight looks like the classic Languedoc cellar, with old cement vats and some old foudres.  However they have divided the cement vats into smaller sizes, which was not easy, but nonetheless preferable to  removing copious amounts of reinforced concrete.  They also have stainless steel vats; Bertrand’s grandfather was one of the first to use them for wine in the Languedoc, in the mid-1970s, inspired by the example of the dairy industry.   The next project is a proper chai à barriques.  They were also amongst the first to plant Merlot in the area, again at the beginning of the 1970s.  Their oldest Cabernet Franc is 15 years old.   A classic Malepère blend must include at least 50% Merlot with at least 20% Cabernet Franc.  Cabernet Sauvignon and Malbec are also allowed, as well as Syrah, Grenache Noir and so on, but they have none of those.    The vineyards have been organic since 2010.  The soil is clay and limestone with an average altitude of 250 metres. 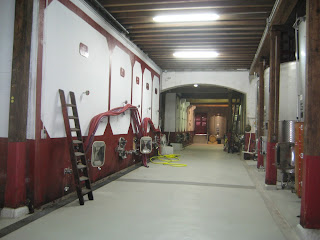 Our tasting began with:

2014 Sauvignon, Pays d’Oc – 7.00€
Fresh and pithy, with a dry finish.   Easy drinking, with some varietal character, but not too much.  The juice is given a little skin contact, before pressing.

2014 Chardonnay, Pays d’Oc – 7.00€
In the range of Heritage Famille Guilhem, with the old photo on the label, and the words ‘Esprit de Famille since 1878.  A little colour.  Lightly buttery; lightly rounded and quite elegant.  No oak.  Some 25 year old Chardonnay vines.

2014 Viognier, Pays d’Oc – 8.00€
Light colour; lightly peachy on the nose, and palate.  Nicely rounded.  Fresh with a touch of acidity.  quite elegant. 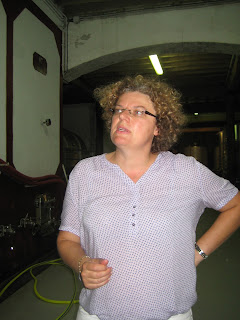 2014 Grand Vin Blanc, Pays Cathare – 13.00€
Half Chardonnay, fermented in barriques and half Sauvignon, fermented in 500 litre barrels, and then blended after fermentation, and bottled in April.  If there was a white appellation, this would be it.  I detected more Sauvignon than Chardonnay on both nose and palate.  Good acidity and a light streak of tannin from the oak.  Nicely understated.  How might it age?  A good balance of the two varieties.
The characteristic of Malepère are quite different within the appellation.  As Catherine explained, the vineyards on the Carcassonne side of the hill are more Languedocien in character, whereas on southern side of the Malepère, nearer to Limoux, the vineyards are more suitable for the Bordeaux varieties.  Grenache or Syrah simply would not ripen here.

2014 Malepère rosé, Prestige du Château Guilhem  – 10.00€
A blend of 50% each of Cabernet Franc and Merlot.  Mostly saigné, using the first free run juice. apart from a plot of young Cabernet Franc.  Pretty pale colour.  Delicate fresh fruit.  Lightly raspberry, and on the palate quite crisp and fresh, with good acidity.  They use a glass stopper for this, which costs ten times more than a cork.   They pick at night.

2014 Pot de Vin, Pays d’Oc Merlot – 6.00€
To be served chilled, for easy summer drinking.  Medium colour. Quite rounded easy fruit, with a streak of tannin.  They use an old label and an old bottle shape from the 1970s.

2013 Malepère Heritage Famille Guilhem – 7.00
Their entry level Malepère, with the emphasis on fruit.  A blend of Merlot and Cabernets, with an élevage in vat.  Quite rounded, ripe and fleshy, with a tannic streak. Easy drinking.    The yield for Malepère is 50 hl/ha but they usually only manage 40 hl/ha.

2013 Prestige of Chateau Guilhem – 10.00€
50% Merlot with 20% Cabernet Franc, 20% Cabernet Sauvignon and 10% Malbec.   Deep colour. Quite rich and rounded with some tannin.  Nicely fleshy with ripe cassis fruit.  Spends eight months in wood, but not new wood.  They vinify single plots and then blend gradually.   The Cabernet Franc gives freshness.  Catherine observed that the last three harvest, 2012 – 2014 have been late and cooler, while 2011 was the last hot year.   And we commented on the heat of this summer; the wind from the Mediterranean was bringing humidity, and oidium loves it!

Good deep colour.  Firm structured cassis fruit on the nose.  A rounded palate with a good balance of tannin and fruit.  Still very youthful.  It makes you think of Bordeaux,  ‘but with the sunshine’ added Catherine.

2012 Clos du Blason, en magnum – 50.00€.   Catherine very generously gave us a magnum, as they had no bottles left for us to taste.  2013 had not been successful as the Merlot got coulure, and the 2014 vintage is still in barrel and will not be bottled until 2016, after 18 months in new oak.   It is 90% Merlot, with one barrel of Cabernet Franc and one barrel of Cabernet Sauvignon.   The idea is to show how well Merlot performs in the Malepère, especially when the vines are 40 years old.    We drank the magnum with friends later that evening.  The oak influence is still very strong, with some ripe vanilla and cassis fruit, balanced by a youthful tannic streak.   The key question is: how will it age in bottle?   For sheer drinkability, the Heritage cuvée was hard to beat. 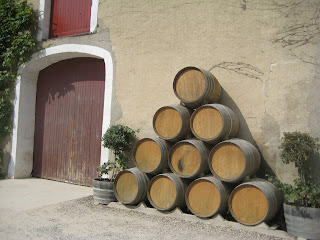 AlanM said…
Interesting Rosemary. Must be a hard sell, Bordeaux varieties are a little out of fashion and from a relatively unknown appellation too?
24 September 2015 at 20:35