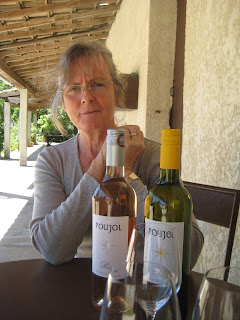 The very first post of this blog records a visit to Domaine de Poujol back in 2009, so it was high time for an update.    As it happened,  a month or so ago, Domaine de Poujol  proved a convenient detour on the way to the airport to retrieve my husband from London flight.
It was a warm summer's morning and we sat outside the cellar with Kim, being deafened by the noise of the crickets.   Kim and Robert have been in the Languedoc since their first vintage in 1994.   And it was interesting to see how their wines have evolved over the years.  The label design has changed; and they have converted to screwcaps.   Virtually all their wines are IGP Hérault rather than an appellation.

2014 Pico, IGP Hérault– 7.00€
A blend of Vermentino, Roussanne and Carignan blanc.  Vinified in tank.  Vermentino works well for them, ripening late.    Fresh herbal notes with good acidity.  A little weight and lightly rounded.   Carignan blanc is not allowed within the appellation and the Vermentino is grown in a vineyard that is too close to the river, hence vin de pays rather than an appellation.

2014 Rosé, Pays de l’Hérault.  – 7.00€
This accounts for 60% of their production.  A blend of Carignan, Cinsaut and Grenache, but no Mourvèdre in 2014, as it ripened too late.   They had serious weather issues in 2014, with three separate floods.   1000 mms of rain fell in about two weeks, and on 6th October the flow of water was strong enough to pull up vines, so that they lost some Grenache and Mourvèdre.  2002 was another year of floods when they lost their entire Syrah crop.

The grapes are all pressed, following the practice of Provence, making for a pretty pale orange pink.  Delicate dry raspberry fruit on nose and palate.  Quite crisp and fresh with a touch of raspberry, with a spicy note.  Very appealing.

2013 Pays de l’Hérault blanc, Carignan blanc – 15.00€
From old vines planted in 1961.  Fermented and aged in an acacia barrel.  Light golden.  Quite rounded and fresh with lightly peachy herbal notes and good acidity.  Very intriguing.  Some minerality and stony fruit, but more weight and more fleshy than Pico.  They make just one demi-muid, and use only minimal use of sulphur.

2013 Podio Alto, AC Languedoc – 15.00€
A blend of low yielding Syrah, Grenache and Mourvèdre, from higher vineyards, aged in barrels, demi-muids,  for 12 months.  Deep colour.  Firm red fruit with a touch of oak. Quite ripe with vanilla an cherry and some tannin.  A rich mouthful, but not heavy and it certain does not taste like 14.5˚ 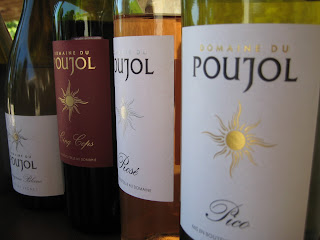 Domaine de Poujol lies in something of a crossroads of appellations.  When Kim and Robert bought the estate, they understood that the commune of St. Gély would be included within the Pic St Loup, but no.  Then it was suggested that they could be Grès de Montpellier, but that idea has been dropped.  And in any case the mayor of Montpellier is now getting involved with Grès de Montpellier, suggesting that everyone should use a special bottle, with a logo, and that would necessitate changing the bottle line, and who wants to do that?

2010 la Bête Noire, Vin de France.  – 15.00€
90% Cabernet Sauvignon with some Carignan.  Picked at the same time and fermented together.  They have always had a small plot, not even one hectare,  of Cabernet Sauvignon on the estate. Deep colour.  Rounded cassis, ripe fruit with some tannin. Rounded and ripe.  Very harmonious, but not at all Languedoc.  Somehow it tasted of the New World, although the Carignan did add a fresher note.

And then Robert returned hot from the vineyards, saying:  But  you must try our Carignan juice before you leave.   They prevent if from fermenting at all so that it has 186 gms of sugar, with ripe fruit and fresh acidity.  Turn it into a sorbet, suggested Robert, but do add some alcohol. So I did.  My husband thought it tasted of cough medicine – maybe pastis had not been the best choice, but it was all I had to hand - but other friends were more polite! 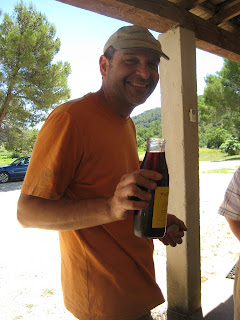