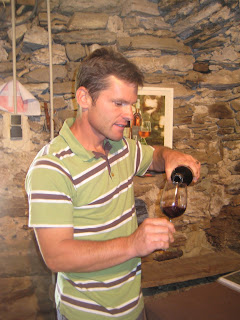 Simon Bertschinger has developed Mas Sibert from scratch and is helped with his wife, Sara Frémine.   He has a delightfully picturesque cellar in the village of Fos, where we tasted, but his vines are near Domaine Bourdic on the Pézenas-Roujan road.  He has just two hectares and makes three reds and a rosé, and is planning to plant vines for a white wine, namely (80%) Petite Arvine and (15%) Albarino as well as (5%) Gewürztraminer, for the côté exotique; just 1300 vines in all which will give him about 1000 litres of wine, but not for another four years,   Simon is Swiss, hence the interest in Petite Arvine.  And for red wines he began with Merlot and Petit Verdot, and planted some Sangiovese and Syrah. And in his vineyard he has three different types of soil, clay and limestone on river terraces, some sandy soil, by the river bank, and some clay, with large stones.  2003 was his first vintage, made from Aramon, which he has subsequently replaced, finally in 2011, with Merlot and Petit Verdot.

Talking about Petite Arvine, Simon said he would pick early to retain the acidity.  The microclimate of his vineyard is quite fresh – and then he observed:  No risk; no fun!  He is biodynamic, but not registered as such.  He makes preparations from various plants, like nettles, bracken, horsetail, and comfrey.  He tries to respect the biodynamic calendar.  He uses a little sulphur at bottling and occasionally tries some wine without sulphur, and neither filters nor fines.  He observed that natural wine can be un peu de tout. 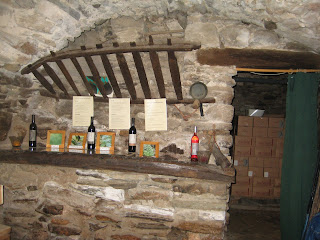 Simon has taken a devious route to land up in the Languedoc.  He did some commercial studies and then he learnt cake making and patisserie, which he really enjoyed, 'but you do not use your brain'.  So he studied hotel management, and travelled, to Piedmont and California.  And then he realised that it was the production of wine that really interested him, rather than working as a sommelier.  So he came to the Languedoc and worked for four months at Domaine Bourdic with Hans Hurlimann and Christa Vogel in 2000, and then in 2001 settled in France.  He worked for other estates, Ollier Taillefer and Château de Nizas, and started his own estate from scratch, very courageously.  His house in Fos includes a small cellar, with some concrete vats and barrels.

2014 Rosé, Vin de France – 7.00€
Simon shuns French wine legislation;  the tax if you are Vin de France is very much lower than for an appellation.  70% Nielluccio, the grape variety of Patrimonio in Corsica, otherwise known as Sangiovese, with 30% Syrah.  Saigné after three hours.  Débourbage,  Classic fermentation in vat.  , using natural yeast and controlling  the fermentation temperature at 19˚C.  Nielluccio retain acidity and is picked before the Syrah. Quite a deep colour.  With dry raspberry fruit.  Quite fresh with good acidity.  Very juicy.  Some tannin as well as acidity This is a food rose; it would go brilliantly with lamb chops off the barbecue.

2013 Armélot, Vin de France – 8.50€
The name implies lots of Merlot, 40%, with the same amount of Syrah and 20% Petit Verdot.  Simon observed that Petit Verdot ripens badly in Bordeaux but here it produces a good crop, benefiting from the warm autumns.  It needs to be 14 -14.5˚ to be properly ripe, while retaining good acidity, and indeed balances the lack of acidity in the Merlot.  Each variety is vinified separately, in vat, and left to age in tank and bottled 12 months later.  Good deep colour.  Rounded cassis fruit, and on the palate, with a fresh tannic streak.  Evolving nicely.  A fresh finish, ripe and firm.  Almost tastes as though it has been in wood, but no it has not.

2013 Fosénot, Vin de France – 9.50€
70% Syrah, with 10% each of Nielluccio, Merlot and Petit Verdot.  Vinified in concrete vats, with an élevage in stainless steel.  Blended after malo.    Deep colour.  Quite peppery fruit on the nose, and fresh peppery fruit and tannins on the palate.  Youthful with acidity and good fruit.  Quite sturdy with an elegant finish.

2013 Soléno, Vin de France – 14.00€
40% Merlot, 30% Petit Verdot and 30% Syrah.  In old wood for eight months.   Simon buys retoasted barrels, which are less aggressive than brand new barrels.  Deep colour.  Quite a firm nose, with some cassis, and more on the palate, with some tannins.  Quiite fleshy with a peppery note.  Oak nicely intergrated.   Youthful, with an elegant finish.

It had been a number of years since I last tasted Simon’s wines and I thought that he had progressed enormously.  He observed that he has become more confident.  He does not have an oenologist; he does not need one.  He simply accompanies the wine but does not intervene too much, with some pigeage and a little remontage for his red wines.   He observed: you employ a consultant oenologist and he makes your wine, or you make your own wine with your own hands.

Simona also has some olive trees, and takes his olives to the mill at Gabian which accepts a minimum of 90 kilos. 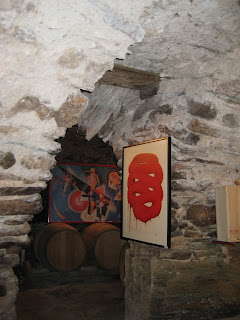 And we finished with 2010 Armélot.
Medium colour.  Nicely rounded with ripe plummy fruit and a streak of acidity as well as tannin.  Good cassis fruit and nicely balanced.  Still very youthful, but beginning to mature nicely.


I asked Simon about projects for the future.  He and Sara are happy to remain small, doing the best they can with their vineyards and respecting the land.  They want to give pleasure to people à table, transmitting their enthusiasm,  so that they passe un moment sympathique.   Sounds good to me.   And on Sundays in the summer they fire up the village bread oven which is just by their cellar; you can bring pizzas to be cooked, and Sara makes bread.  I must go and try some. 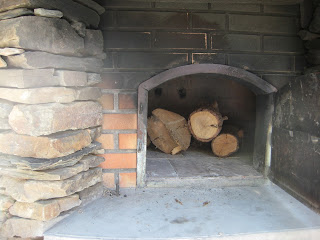