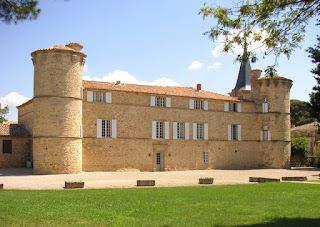 Château de Jonquières, in the village of Jonquières, has been in the same family since the 12th century.  The family name may have changed, but the property has never been sold, and it has been an agricultural property since the 13th century, always with vines and sometimes wheat.   It is well placed, on the road to the Col du Vent at Arboras, connecting the north to the southern half of the Hérault.  Nor has it ever been fortified, but retains stylish Italian Renaissance architecture from Bernardin de Latude, who was a pageboy to the mother of Louis XIV.  There is a long family history, too complicated to give the exact details here.   They have a price list for Canada dating from 1870, including a  wine from Jonquières, and a Muscat de Frontignan was the same price as a Sauternes, and they won a silver medal at the Paris Exhibition of 1889, the year the Eifel Tower was built.  The chapel of the château is still used by the villagers of Jonquières and the original statues of the lions at the bottom of the grand  staircase were destroyed at the Revolution, but the villagers defended the château itself. 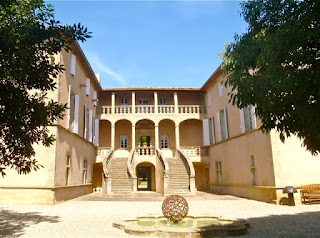 The viticultural part of the estate is now run by Charlotte de Cabissole, with her husband, Clément de Béarn.   Charlotte is the third child of François and Isabelle de Cabissole, who took over the family estate in the 1980s and began developing sales in bottle in 1992.   Charlotte studied economics and English at Reims, where she met Clément.  They spent the summer of 2011 running a table d’hôte at the château, for her parents’ guests, and realised that they would really like to make wine.   Her siblings were not interested; so in 2014 after viticulture and wine-making studies in Pézenas, they officially took over the wine production of  Jonquières,    Isabelle and François still run chambres d’hôte - and it would be a wonderful place to stay.

They have a very logical range of five wines, three colours of Lansade, and a red and a white oak aged La Baronnie.

2014 Lansade Blanc,  Pays de l’Hérault - 11.50€
70% from 30 year old Chenin Blanc vines and 30% Grenache Blanc.  A simple vinification in vat, and blending during fermentation.  The Chenin is picked a little earlier than the Grenache.  A dry honeyed nose that is very characteristic of Chenin Blanc.  Elegant palate; the Grenache adds weight, but good acidity and dry honey and potential for ageing in the bottle, with some structure.

We talked about the reasons for Chenin Blanc in this area, when of course it is usually found in the Lorie Valley.  Apparently the coop in the adjourning village of St. Saturnin asked for Chenin Blanc as an experiment some 30 years ago, as they were looking for varieties that would retain acidity in the white wine, but Chenin was never accepted in the appellation.  However, as a result other growers have it too, Alain Chabanon, Domaine de Pountil  and Cal Demoura; Olivier Jullien has replaced his with Carignan Blanc. 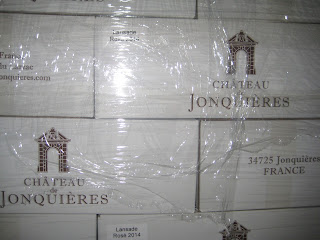 2014 Lansade rouge, Terrasses du Larzac – 11.50€
A typical Languedoc blend with the usual five varieties.  As much as 40% Carignan, with a high proportion of Cinsaut and just 10% Mourvèdre.  Blended in December and given an élevage of 12 – 15 months in vat.  Carignan is now considered a principal, rather than a secondary variety for the Terrasses du Larzac.  Medium colour.  Quite a firm stony mineral character.  Dry spice.  Medium weight.  A certain freshness, with good fruit.  14˚ but does not taste heavy. 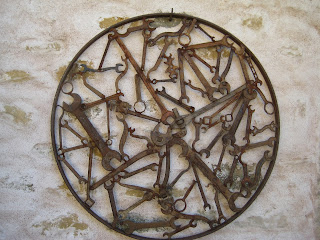 I asked about other wine growers in the village of Jonquières – they include some good names:  Mas Jullien, Cal Demoura, Mas de l’Ecriture, Mas Pountil, Le Peira, and two that I did not know, namely Mas de l’Erme and Le Clos du Lucquier.  They see themselves at the heart of the Terrasses du Larzac. 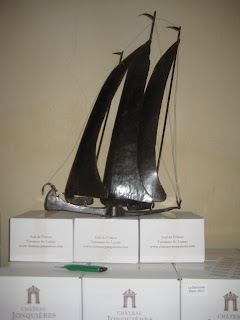 2013 La Baronnie Blanc, Pays de l’Hérault – 16.50€
A blend of 50% Grenache and 50% Chenin Blanc, vinified in barrel, and given a little bâtonnage, and then ten months ageing on the lees, without any more bâtonnage.  Light colour.  Quite a firm nose.  A touch of oak, but nicely integrated, and again on the palate, the oak is present but not intrusive.  Nicely mouth filling, with good acidity, good body and a long finish.    A lovely glass of wine, with ageing potential. 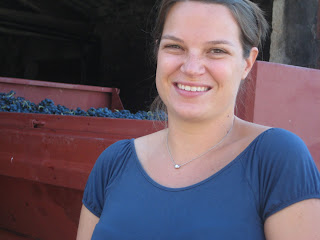 Jonquières is well worth a visit, not only for its wines, but also for the architecture.  They organise guided visits twice a week on Wednesday and Friday mornings, between April and September, which include some history as well as tour of the cellars and a tasting.  It would be worth a journey, and most certainly a detour. 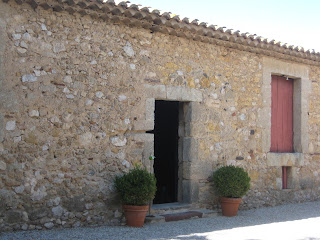