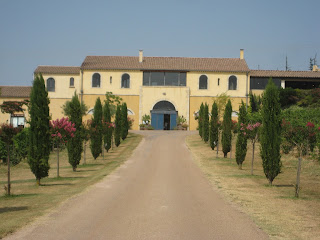 Domaine Gayda is an old wine estate outside Limoux, dating back to 1749.  Technically it is within the appellation of Malepère, but instead they produce some highly original vins de pays.   The current history began in 2000 when Anthony Record bought the property as a holiday house. However, as an energetic entrepreneur he was not going to neglect his land, and so the wine estate is the result of an association of four people, Anthony Record, Tim Ford who had run a large business exporting roses grown in Kenya and Zimbabwe,  until he was expelled by Mugabe; Mark Kent, a South African winemaker who runs Boekenhoutskloof in Franschhoek and Vincent Chansault, the wine maker.  All four have some link with the Cape. 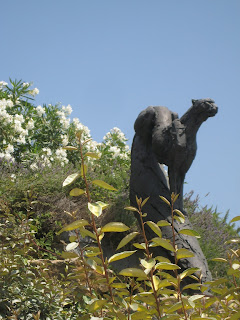 Vincent arrived here in 2003, after working a number of years in  South Africa  and examined the soil and the climate, totally disregarding the fact the land was appellation Malepère.  Instead he chose to plant Cabernet Franc – for Malepère he should have opted for Merlot.   There was a spot by a stream where he thought there was the potential for pourriture noble, where he has planted Chenin blanc, and he also  planted Sauvignon, and some Syrah in some particularly poor soil.  And they built a cellar, and also opened a restaurant.  The concept of oenotourism is particularly strong in South Africa, and that is something that they wanted to develop.  I was amused to find a collection of old black and white photographs in the ladies’ loo featuring various film stars inelegantly eating spaghetti, Sean Connery, Charles Aznavour, Marcello Mastroianni and others.  And there is also a wine school, Vinécole,  run by fellow Master of Wine Matthew Stubbs. 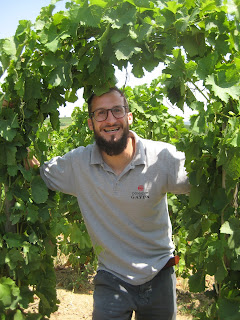 Vincent showed us round.  He explained that Malepère means mauvais pierre, in other words stones that are not good for construction, but are very soft and friable, and therefore make for good agricultural land.  And 10 kilometres west there is the partage des eaux.  The climate is unique as the Pyrenees block the influence of the Mediterranean, and so it is much cooler here than anywhere else in the Languedoc.

Vincent exudes enthusiasm and you sense that he is very competent and focussed.   First he showed us a small plot of vines, just 50 ares planted close to the winery.  They had used selection massale, from vines originally planted in 1920.  He explained that if he were to start again, he would plant their vineyards in smaller plots, not in the long rows to which he was accustomed in South Africa. This particular plot was planted en echalas, each with a supporting pole, in a triangular format so that there is no shading between the vines, and they are just allowed to grow at will and often latch on to their neighbours forming an arch.  Domaine Gayda has been farmed organically since the beginning and now they are moving towards biodynamics.  The soil here is very hard, with a high pH and very little microbiological life, and they want to improve that through biodynamics. 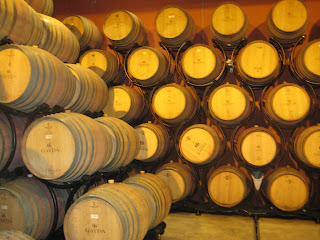 In addition to the vineyards at Gayda, they buy lots of grapes, particularly from Roussillon, at Opoul near the coast, Calce, Latour de France and St. Martin de Fenouillet.  Vincent enthused about the extraordinary complexity of the terroir of Roussillon, with granite, gneiss and schist.  They use a refrigerated lorry to bring the grapes back to Gayda.  Their  harvest lasts about two months from about 20th August to 20th October.   Vincent was also particularly taken with Minervois La Livinière and there they have bought vineyards, which now total 10 hectares.  They now have a cellar there too, which means that they can sell the wine as Minervois La Livinière, under the name La Villa Mon Rêve,  which is the name of a little house in the middle of the vines.

The modern cellar is well equipped, with lots of small stainless steel vats, for different vineyard sizes, and 500 barrels, with an oxaline system for easy manoeuvrability.  They replace 50 barrels each year, and use different coopers with different toasting, and place more importance on the tightness of the grain, rather than on the particular forest.  Sometimes they want as long as five years seasoning for their oak.  They use natural yeast, and Vincent talked about a study on the DNA of yeast, examining the yeast on Syrah from three different vineyards, la Livinière, Gayda and Roussillon and each was quite different, illustrating that the indigenous yeast do indeed contribute to the character of a wine.  Temperature control is manual rather than computerised, so that everything is regularly checked, with the necessary remontages and pigeages.    And then there are experiments, eggs, for Grenache Gris and Chenin blanc, foudres for élevage, and also demi-muids, which are good for Grenache, while Syrah does better in barriques.  Vincent observed that tradition is an experiment that worked, and that they are creating their own history. 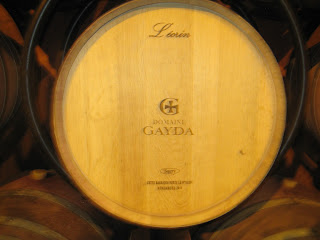 And then it was time to taste:

2014 Viognier, Pays d’Oc – 6.95€
From three terroirs, the schist of Roussillon, limestone from the Minervois and Gayda and granite from Roussillon.  Vinified in vat.  Light golden. Delicately peachy, a delicate nose, lightly floral with peaches and apricots.  No bitterness on the palate.  Elegant and balanced with a fresh finish.  A blend of terroirs.  Each is vinified separately and then gradually blended.

2013 Figure Libre, Freestyle, Pays d’Oc.  – 10.00€
A blend of Grenache Blanc, Marsanne, Roussanne and Macabeo, Chenin Blanc grown on granite.  The back label gives very detailed information about exact provenance and percentages.  Suffice it to say that Grenache Blanc accounts for over half.  Vinified plot by plot; nine months in wood and blended at the last moment.  13˚.  Intriguing white blossom, a hint of oak and on the palate a nicely rounded texture and lots of nuances.  Very good acidity, a saline quality and some minerality.  .  Quite a dry finish. Minimum sulphur and no cultured yeast.  Understated weight.  Still very young. Give it 5 – 7 years.

2013 Chenin Blanc, Figure Libre, Pays d’Oc – 14.00€
Vincent enthused about how Savennières is one of his favourite wines.  And he wants the Chenin Blanc at Gayda to have some noble rot; sometimes it is as much as 100%.  This 2013 was light in colour, with some dry honey on the nose and very good acidity on the palate, balanced with ripe honeyed fruit.  Elegant, balanced and lots of nuances and a long finish.  A lovey glass of wine.  It has been kept in an egg and was bottled a year ago. 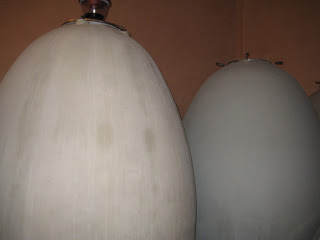 2013 Syrah, Vin de Pays d’Oc – 7.00€
From vineyards of limestone schist and granite.  No wood.  Deep young colour. Lightly peppery.  A fresh dry peppery palate.  Just 13˚.  Crozes-Hermitage is Vincent’s inspiration here.  He wants lightly grained tannins, with some of the spice of the garrigues, observing that altitude has an important impact on aroma, favouring 200- 300 metres. And he limits the yield to 50 hl, observing that the vignerons do have to make a living.  It’s mon vin de pétanque.

2013 Figure Libre Freestyle, Pays d’Oc – 10.00€
A blend of 45% Syrah, 10% Mourvèdre, 25% Grenache Noir and 20% Carignan.  20 to 80 year old vines.  Medium colour.  Quite a firm nose.   A rounded fresh palate, with lovely garrigues fruit and spice.   Nicely integrated tannins and a fine balance.    Elegant red fruit.  They have retained freshness in the wine.  As négociants, they have access to some very good grapes.

2013 Figure Libre, Pays d’Oc – 14.00€
100% Cabernet Franc from the Malepère.  Élevage in barriques, as well a tronconique vat and a foudre.  And Vincent wants to try out an egg too.  Twelve months élevage.  This was bottled last November.    2013 was a tricky vintage for grapes that ripened late, as it was hot and humid just as the grapes were ripening and they had to pick very quickly or else they would have lost everything to rot.    The wine has lovely fresh fruit, with supple tannins.  Youthful.  Medium weight.   A beautifully ripe Cabernet Franc. 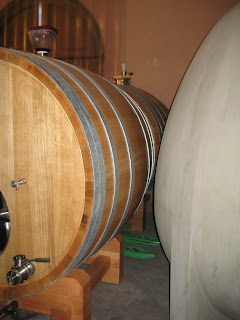 2012 Chemin du Moscou, Pays d’Oc  - 20.00€
This is  their address and also the name of the air corridor for the aero-poste after it left Toulouse, in the early days of s flying postal service.    A blend of Syrah,(62%)  Grenache (32%) and Cinsaut (6%).  They are aiming to increase the percentage of Cinsaut, and planting more at La Livinière.  12 months élevage separately and then another 12 months in barrique together.   14˚.  Rich and intense on the palate, but not heavy.  Rounded with supple tannins and black fruit and a peppery note.  Youthful with lots of potential.

2012 Villa Mon Rêve, Pays d’Oc, - 45.00€
Pays d’Oc as it was not made in La Livinière.  The 2013 vintage will be Minervois La Livinière.   They made just 2500 bottles.  Pure Syrah.  13.5˚  Two years ageing in small foudres.   A lovely interpretation of Syrah, rich but supple, garrigues fruit.  Lots of nuances.  Elegant a fresh finish and masses of potential. 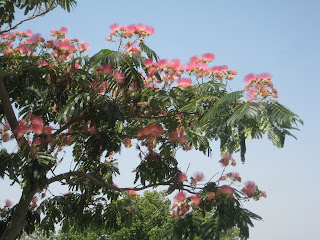