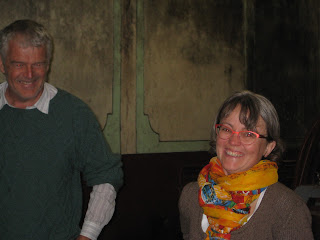 Friends' dinner tables can often be a good source of interesting bottles, and so it was with Domaine de l’Horte.  Lizzie and Ali had had a lousy meal at a local restaurant, but the wine was delicious, and it came from Domaine de l’Horte, so further investigation was required.  So off we went to visit, André and Marie-Victoire kindly accepting to see us one Monday morning towards the end of the harvest, when they were not too overwhelmed by grapes. 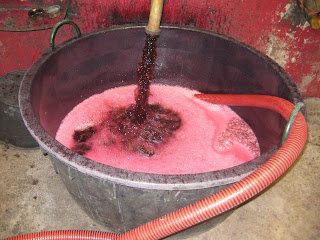 We wandered round the cellar with André - he was in the middle of a remontage and we watched wine gushing out of the tank at one level, and then being sprayed onto the cap on the top of the tank, in the attic of the barn.   He explained how he came to Domaine de l’Horte; his father did market gardening outside Béziers, especially vegetables, but also had a few vines.  André studied viticulture and oenology at Montpellier and in 1991 he bought Domaine de l’Horte, really he admitted, without realising its potential.  The previous owner was an absentee landowner who employed one workman to produce bulk wine, just one wine from the property.  André does still produce wine for the bulk market, but he has also developed a range of characterful wines in bottle, both Côtes de Thongue and Languedoc that are sold mainly at the cellar door.   The main vineyards are in a large plot by the cellar close to Magalas and by the chapel of Ste Croix and the grape varieties are Roussanne, Vermentino, Marsanne, Chardonnay, Grenache Noir, Syrah and Cinsaut, and a little Petit Verdot.  Unusually André has no Carignan; it wasn’t very good and he has pulled it up.  In fact he has replanted most of his vineyards. 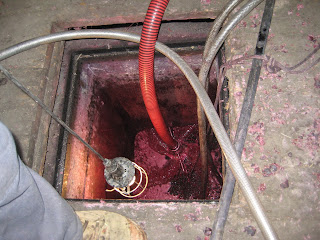 The cellar is the classic old cellar of the Languedoc, dating from the end of the 19th century but with cement vats rather than old foudres, and André has added some smaller vats but done little to modernise it.  He still uses a continuous press, but he does have cooling equipment, and enjoys the luxury of space.   He observed that it took time to learn about his vines and he has an oenologist who he described as his frère de coeur.  And for his top red cuvée for which he does pigeage rather than remontages, he uses the old lavoir – he was talking about buying a new vat, and it was a visiting Australian wine maker who observed that he already had just what he needed. 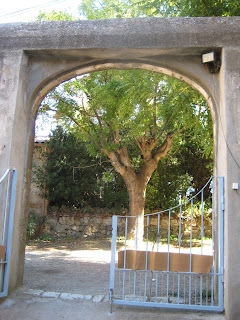 Andre went back to his remontages and we settled down to a tasting in the courtyard with Marie-Victoire.   She is fun and lively and has worked in international banking.  So how do you meet a vigneron in the Languedoc if you come from Picardie in the north and work in Paris?  Simple answer - at a wedding.  Her assistant was from the Languedoc so Marie-Victoire went to her wedding and met André who was a friend of the bridegroom. 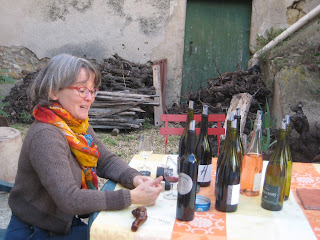 2014 Rosé, Côtes de Thongue – 5.00€
A blend of Cinsaut and Grenache.  Saigné. Pretty colour.  Delicate fruit on the nose.  Quite rounded with good acidity.  Very fresh.  A crisp sappy note on the finish.

2013 Destins Croisées, Coteaux du Libron – 7.00€
Lightly oaked; fermented in oak and spends a few weeks in oak.  A bit of bâtonnage.  From vines in the suburb of Béziers on river gravel.  A little colour.  A touch oak on the nose, but not too much.  A rounded palate, with firm acidity and quite a dry firm finish.  And why the name?  André has been about to give up on Chardonnay when he encountered, il a croisé,  a friend who told him to carry one with it.

2013 H, Languedoc – 11.00€
A blend of 60% Vermentino and 40% Roussanne; they are planted together in the same vineyard and picked together.  The Vermentino is a little more productive than the Roussanne.  On the garrigues of Magalas.  30% vinified in oak, and co-fermented, with some bâtonnage.   Light colour.  Lovely intriguing herbal notes on the nose.  Herbal, pithy fruit, with good balancing acidity.  A delicious glass of wine. 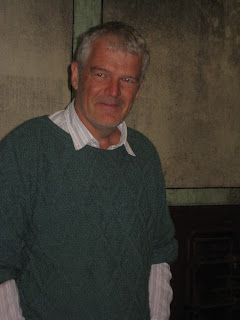 Simplement!  Vin de France – 5.00€
They don’t bother with a vintage for this wine as it is intended for easy and early drinking.  70% Syrah and 30% Petit Verdot.  Light red fruit, with cassis notes.  Medium body, fresh fruit , balanced with a fresh streak of tannin.

2012 Emilie, Côtes de Thongue – 7.00€
Pure Syrah and a homage to André’s parents, Emile and Emilie who helped him with the purchase of the estate.   Fresh peppery fruit on both nose and palate.  Supple and fresh, spicy red fruit.   Drinking beautifully.

2013 H Rouge Languedoc – 12.00€
A blend of Cinsaut, Syrah and Grenache. Elevage in vat.  2013 was the first vintage of this cuvée, and they made none in 2014 and there will none either in 2015, thanks to a very small crop of Grenache Noir.  Light nose and on the palate easy peppery fruit.  More structured than Emile, but not aggressively so.  Well balanced palate making for refreshing drinking but without any great depth.

Marie-Victoire explained that the name is a game between three friends, with the patience to make good wine, namely André; his oenologist, Pierre Dubrieu, who runs a winery for Jean-Claude Mas in Limoux, and Gilles Barrow, who is involved with their label design.  The three names are on the label.

André  comes across as a bit of a rebel; he tried working with Terra Vitis, but prefers to do his own thing. He works organically most of the time, but may use a chemical if absolutely necessary, when it is a question of saving the crop.  And he really wants to try working with a horse.

Les Elucubrations de l’Horte, Vin de Liqueur – 12.00€
The name means a mad idea, and the wine is made from Grenache that has been muté like a vin doux, and then aged in wood, in an old Cognac barrel.  16˚.  Ripe fresh Grenache fruit, ripe cherries, rounded and spicy and not too spirity on the finish.  A sympathique finale to a very friendly tasting.

They also want to sell more in bottle, which they do mostly in wine salons or at the cellar door, so do go and visit them.  Ca vaut le detour.  Their website tells you how to find them. 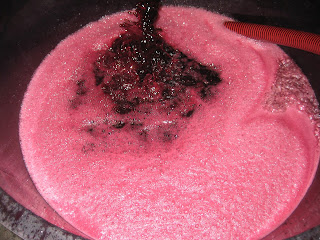