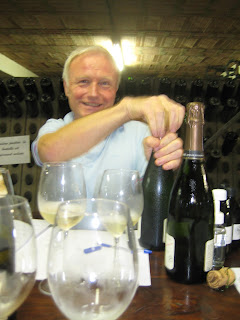 Tasting with Jean-Louis is always an exciting experience.  You never quite know what to expect; he has an ability to surprise,  and enjoys some confrontation.  The very first time we met, back in the last century, he sprang a blind tasting on me.  This time was much more relaxed; we were  six around a table in the coolest part of his cellar in Limoux, down two stories, on a very hot afternoon.    He originates from Champagne, studied in Burgundy  and has made sparkling wine in South Africa, helping to develop Cap Classique.  When he first came to Limoux, he owned Domaine de l’Aigle which he sold to the Burgundians Antonin Rodet – it is now part of Gérard Bertrand’s empire, and he fell foul of the French authorities for planting Riesling and Gewurztraminer.   These days he has vines  outside the village of Roquetaillade, as well as a vineyard in Roussillon,  and operates in Ets. Babou’s old cellars on the edge of the town of Limoux.   And his current bone of contention is the fact that you cannot make any sparkling wine in Limoux other than Limoux, so there is no possibility of making a quality sparkling wine or indeed a cuve close wine that does not conform to the Limoux regulations.    Jean-Louis considers this to be too prohibitive.  They produce Kriter in Burgundy and Veuve du Vernay near Bordeaux, so why not ……. He also complains about the restrictive percentages of grape varieties in Limoux, that Pinot Noir should not exceed 20%.   And somehow he seems to find a way around these various restrictions. 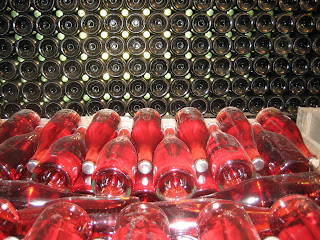 We settled down to taste.  First came variations on his Crémant Blanc de Blancs,  Brut Nature sans sulfites, (10.00€) from 80% Chardonnay and 20% Chenin.  There should be some Mauzac too, but never mind. The wine has spent two years on the lees, without a dosage, and was disgorged in front of us.  It was very fresh and pure with a good mousse.    Then to show the effect of dosage Jean-Louis added  6gm/l of residual sugar, which fills out the palate very nicely.   The next sample had been disgorged in June and had had time to become more integrated and creamy with some weight.  And the final wine of the flight, disgorged in May 2014, had more depth on the nose and palate, with some notes of brioche and honey, with depth and balance.

Next came a flight centred on Tradition. (11.00€)  Essentially this is the wine that Jean-Louis has always made,  first under the label of Charles de Fère and then at Domaine de l’Aigle.  The current release from the 2010 vintage is quite firm and dry, with a little body and some bottle age.  The wine from the 2012 which is not yet released in youthful and fresh with a hint of dry honey.  The Pinot Noir (50%) gives some structure and length.

Bulles d’Argile, Crémant de Limoux. Extra Brut (17.00€)  disgorged in March, with 5 gm/l residual sugar, is a blend of Chardonnay and Pinot Noir.  Some barrel fermentation in old wood, and no sulphur.  During the second fermentation the yeast absorbed the oxygen, making for a wine with a little colour, some rounded, lightly toasted elegant fruit with good depth.  In contrast the Brut Nature disgorged in 2014, without any dosage, was firm and fresh, structured and quite austere on the finish.  If you don’t use sulphur, you have to be meticulous about hygiene, but carbon dioxide helps too.  With that advantage more champenois ought to make sulphur free wines, observed Jean-Louis. 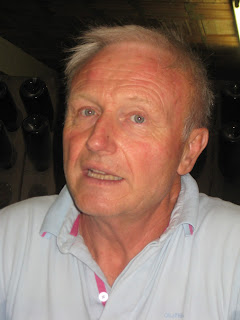 And then we were treated to three quite different wines from the same vineyard, a seven hectares  plot in St. Paul de Fenouillet in the Haute Vallée d’Agly, so one of the cooler parts of Roussillon.
Brut de Syrah, Blanc de Noirs, Brut Nature disgorged in 2014 – 12.00€.  it was quite firm and structured with good acidity and some depth.

Bulles de Syrah Rosé d’une Nuit, from grapes picked ten days later.  The grapes spend one night on the skins, making for a pretty pink.  Jean-Louis stops the fermentation leaving some natural sugar for the second fermentation, which makes for more fruit and less acidity in the wine, so that it was quite overtly fruity, but nicely rounded with an elegant finish, and it went deliciously with my New Zealand friend, Lynne’s, pavlova later that evening.

2013 Mes Vignes de St. Paul, Vin de France   The remaining Syrah is picked three weeks later,   No sulphur. It is a classic Syrah, with a deep colour, and sturdy youthful  peppery fruit, with a rounded finish, and quite restrained for Roussillon.   It was simply amazing to consider that all three wines came from the same vineyard. 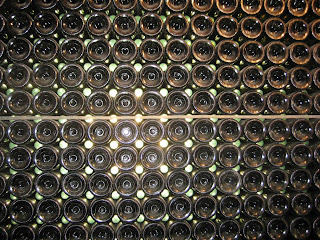 Limoux is one of the few places in the Languedoc where you can make really fine Pinot Noir.  Jean-Louis has a vineyard in the village of Magrie, and makes two cuvées, which he would call his village wine (12.00€) and his grand vin (20.00€).  The 2014 village wine is unwooded and has some fresh red fruit; it is medium weight and youthful with supple silky fruit.  The Grand Vin, les Bougats is altogether more serious, with ageing in wood, but none new.  With a deeper colour, it is more structured and again with some elegant fruit.  2014 was a very balanced vintage.    And then we compared the village wine of 2013 with the Grand Vin of 2012.  The 2013 village wine was youthful and fresh with a tannic streak and has yet  to open up, while the 2012 Grand Vin, a warmer vintage,  developed beautifully in the glass, with rich fruit, texture and depth.   Jean-Louis observed that the quality of Pinot Noir from the Languedoc still has to be recognised, but that will come.  And in the context of Pinot Noir, the ripest vintage is not always the best.

And then we moved onto bordelais grape varieties.  First came 2014 Cabernet Sauvignon from the Haute Vallée de l’Aude.  This is the first time that Jean-Louis has made Cabernet Sauvignon without any wood ageing.  It had a deep colour, with some solid cassis fruit on the nose and on the palate was ripe and rounded, with firm youthful tannins and ageing potential.  This was a vat sample, as was the Cabernet Franc that followed.  Again it was made without any oak, with fresher fruit than the Cabernet Sauvignon, and more acidity and tannin.  And then we looked at Merlot, Chloé Vieilles Vignes, from forty year old vines.  Some oak ageing.  A ripe plummy nose, with fleshy ripe black fruit.  Youthful with lovely fruit and firm tannins. 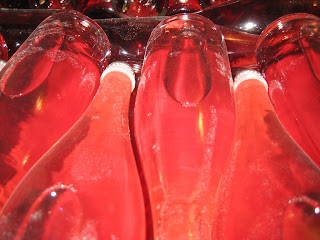 According to the tasting sheet, our tasting was going to finish there, but it didn’t!  Next Jean-Louis opened a 2013 Cabernet Franc.  A little ageing in old oak makes the wine heavier.  In comparison 2014 has more acidity, but there was fresh fruit and textured palate.  The 2013 Cabernet Sauvignon had also been in old wood, and was firm and structured with dry cassis and some slightly drying tannins.  I much preferred the unoaked wines.

And then we got onto the subject of eggs.  Jean-Louis snorted ‘bullshit’.  The wine doesn’t breathe in an egg.  He is much more interested in amphora; something in the clay of an amphora prevents the development of volatile acidity, whereas there is something in wood that can encourage it.  He has found a source of amphora, a local company in nearby Castelnaudary and is discovering amphora.   Nothing stands still, even if he is considering slowing down and wondering whether his son might like to take over.  And I later read that he has sold the 25 hectare estate of Métairie d'Alon to Clément Badet, a company with quality aspirations in the Languedoc.

And later that evening as we enjoyed the Brut de Syrah, I read the back label: Attention: vous allez déguster un vin singulier, identi-terre, une création bien loin de la standardisation du gout.  Buveurs  d’étiquettes et de cuvées prestiges; s’abstenir.    There is a ram on several of Jean-Louis’ labels  – his star sign is Aries – prompting him to observe that ‘ I am following my star, not the herd’.    And on his labels he describes himself as an artisan vigneron, which sums him up very nicely.
www.jldenois.com 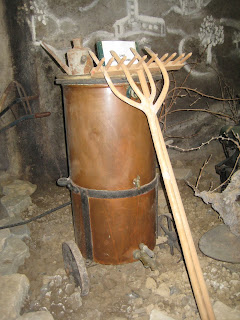 Zzzz said…
Sounds like a fellow I need to check out the next time I pop across the border. I especially love the "No visits, no sales" on his website. Loved as that's the general assumption in Catalonia!
14 October 2015 at 17:49