One of my best Zoom experiences last autumn was a Masterclass with Gérard Bertrand.   Ten bottles of wine were delivered before the class and we - my husband and a fellow Languedoc enthusiast friend - tasted our way through them, listening to an accompanying commentary from Gérard.

First, he talked very articulately about his philosophy.  He is passionate about the south of France and very committed to biodynamic viticulture.  He reminisced about his father, Georges, describing him as a visionary, with a great talent for blending wines.   I remember Georges from one of my early visit to Corbières when I was researching French Country Wines.  He pioneered the élevage of Corbières in French oak barriques, which was ground-breaking at the time, and gave me a vertical tasting of ten vintages beginning with 1978.

On the subject of biodynamics, Gerard enthused about the low yields, the phenolic maturity, the higher acidity levels, and the biodiversity which enforces the taste of somewhere, the sense of place.   He is looking for balance and energy in his wines, and considers biodynamic farming to have changed his life.  He began small, with four hectares and working up to 800 hectares, to include all his properties in the Languedoc. 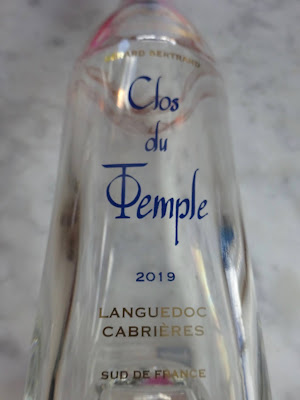 This rosé comes from seven plots totalling eight hectares up in the hills above the village of Cabrières, where the landscape is truly breath-taking.  The wine is a blend of Grenache Noir, Cinsault, Syrah and Mourvèdre, with just a hint of Viognier.   I had last tasted this wine about four months earlier, and thought now that it had started to develop very nicely.  The colour is very pale and the nose firm and dry, with a rounded palate and good depth and an elegant finish.  It was a satisfying balance of elegance and weight.   There is no reason why this wine should not evolve in the same way as a white wine, over, say the next five years or so, which given the price tag, you would certainly expect it to do so.  Most of the wine has been aged in oak, balanced with about 20% in a concrete vat. 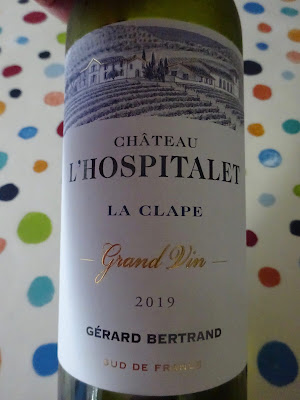 A blend of Bourboulenc, Vermentino and Grenache Blanc.  Château l’Hospitalet, on the Massif of la Clape, is Gérard’s flagship estate.   The wine is fermented and aged in oak for about seven to eight months, and the oak is very well integrated.   There are rounded herbal notes on the palate and also a touch of salinity with some weight and a firm finish.  Another wine with plenty of ageing potential.    I have drunk white wines from other La Clape producers, notably Château d’Anglès, that have aged beautifully.    A shining example of the wonderful improvement in the white wines of the Languedoc. 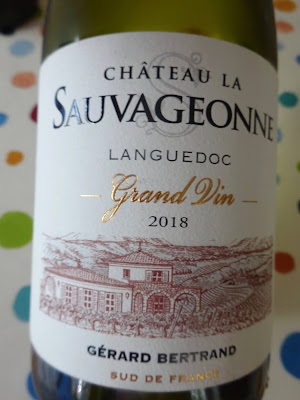 A blend of Grenache Blanc, Vermentino. Viognier and Roussanne.   Gérard enthused about the 2018 vintage, a year with a wet winter, building up good water reserves, and then sun and rain during the growing season at just the right moment.  La Sauvageonne is up in the hills of the Terrasses du Larzac above the village of St. Jean de la Blaquière in one of the coolest areas of the Languedoc.    I usually like the white wines from Sauvageonne a lot, but on this particular tasting, I found the oak too intrusive, which seemed to flatten the palate, with less fresh acidity, and so I much preferred Château l’Hospitalet.   However, the rosé from Sauvageonne is consistently a star amongst the Languedoc rosés. 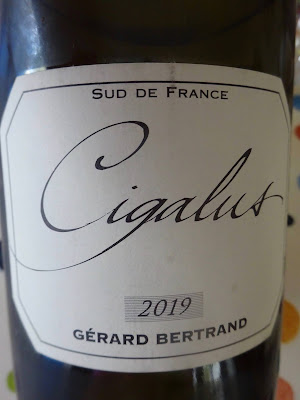 A blend of Chardonnay, Viognier and Sauvignon Blanc, which do not belong in the appellations.   The winter was wet in 2019, which was followed by an irregular spring and a hot summer.  70% of the wine has been fermented in new oak barrels followed by an élevage, with regular lees stirring, with the rest in stainless steel vats.  ‘The Chardonnay provides structure, the Viognier aroma and the Sauvignon freshness’, so said the tasting booklet, but I found that on the night it was oak that dominated both the nose and palate.  There were some peachy hints from the Viognier, but also plenty of vanilla from the new oak.  How will it age?  For the moment, it was all ‘un peu too much’. 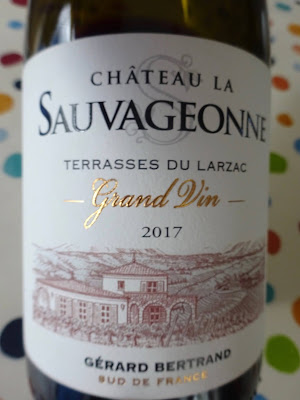 The vineyards at Sauvageonne are at an altitude of 300 metres and includes plots of old vines.  Grenache is the main variety, with as much as 50 – 60%, plus some Syrah, Mourvèdre and a touch of Carignan.  Gérard enthused about the Grenache in the Terrasses du Larzac; it is very distinctive, while Syrah provides structure.    2017 was marked by spring frost, on 26thApril, which is very unusual in the Languedoc, and a dry summer followed.

My tasting notes say quite simply ‘the Languedoc in a glass’.  Good colour, with a ripe rounded spicy nose and on the palate, some silky tannins, with elegant spice balancing the fresh tannins that are a hallmark of the Terrasses du Larzac.  The flavours were lively and fresh with a mineral note on the finish.   I have to admit that we finished the bottle with supper afterwards! 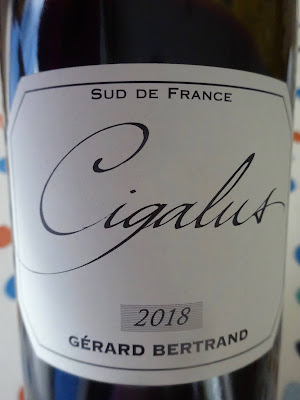 A blend of Merlot, Cabernet Sauvignon, Syrah, Caladoc, Cabernet Franc, Grenache and Carignan. Aged in oak for 12 months.  Deep colour.  Lots of nuances on the nose, red fruit and oak, but I found the palate a little muddy, almost as though there were too many different grape varieties so that the wine lacked focus and definition.

Georges Bertrand bought this estate back in 1967.  A blend of Carignan, Syrah, Grenache and Mourvèdre, including some 80-year-old Carignan vines and some 30-year-old Syrah, which is a good age for Syrah in the Languedoc.  Elevage in Bordeaux barrels for 10-12 months.   Deep colour. Rounded ripe spicy nose.   A warm rich wine, with length, and some firm tannins, making for a refreshing finish. However, it is pretty alcoholic at 15°, but not noticeably so.  A wine with considerable ageing potential.

2016 had a mild winter, which was followed by a cool wet spring and a hot summer.  The harvest took place in ideal conditions. 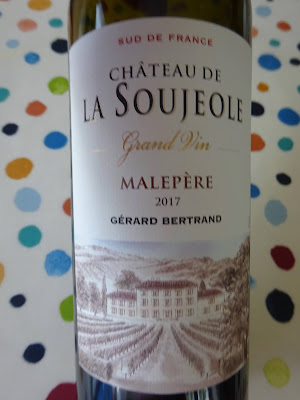 A blend of Cabernet Franc, Merlot and Malbec.   This was a complete change of register, with the bordelais grape varieties that are essential to the appellation of Malepère, the most western part of the Languedoc.  Cabernet Franc is the driver here.  Medium colour. A restrained nose and palate, with dry cassis and some firm tannins.   It is quite different from anything else in the Languedoc.  Malepère deserves to be better known and maybe Gérard will be able to help develop its reputation. 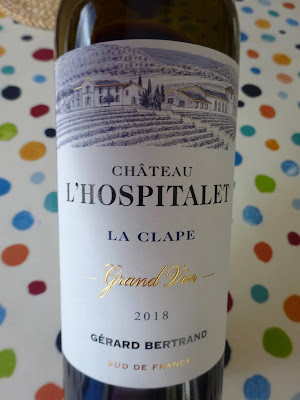 A blend of Syrah, Grenache and Mourvèdre.   Deep colour. Rich, black olive tapenade on the nose and on the palate rich rounded spice, balanced with a firm structure. Youthful solid and dense, with a fresh finish, and considerable ageing potential.  ‘Still a baby’ commented Gérard.

He talked about buying Château de l’Hospitalet back in 2001; 'it changed my life'; it was an iconic estate, and he would never have dreamt of owning it, but the previous owner, M. Ribourel, who wanted to sell, suggested to Gérard that he buy it, and then he had to convince his bank manager!   For Gérard and for wine lovers of the Languedoc, it is more than just an estate, but a destination with a restaurant and a hotel and a tempting shop, all in a beautiful part of the Languedoc, just outside Narbonne. 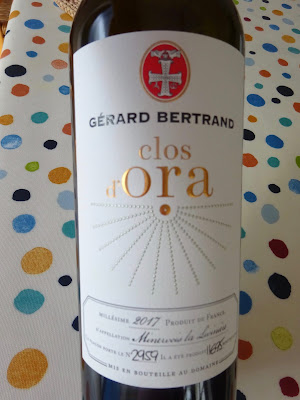 A blend of Syrah – 60-65%, Grenache 15-20%, a little Mourvèdre and just a touch of Carignan, from a nine-hectare plot with limestone and marl.  Deep colour, with black olive tapenade on the nose.  Rich rounded, ripe and dense, with a firm streak of tannins.  The oak is still very apparent, as is the alcohol at 15.5°.  How will it age?  That is the key question, especially for a wine that is one of the most expensive red wines of the Languedoc.  Gérard suggested drinking it sometime within the next 40 years.  As a three-year-old wine, it was certainly still too powerful to enjoyed, appreciated yes, but not drunk with any great pleasure.

The first vintage of Clos d’Ora was 2012, so it is still early to observe its potential for longevity. A lot of care and attention has been lavished, both in the vineyard and in the cellar.  They work only with horses – no tractors here.   Each grape variety is vinified separately, with differences of technique to suit each variety and then the wine is aged in French oak for 12 months.   It certainly made an impressive finale to the tasting.