Domaine Maris - A pair of Minervois

First an extract from my book: Wines of the Languedoc.  Obviously present circumstances not allow for a cellar visit.

Come and see my vegetal roof, or toit végétal was an invitation, that I could not possibly refuse!    It came from Bertie Eden of Château Maris. He has built a brand-new cellar on the outskirts of La Livinière off the road to Caunes-Minervois.  Not only is the roof green, but the bricks are made of hemp straw and the whole cellar, apart from the concrete floor, could be recycled.

Bertie talked about the bricks.  Building material in France must be authorised, so that its   parameters are recognised, as to how much weight the bricks can bear and so on.  Hemp is not recognised as such, but wood is, so there had to be a wooden frame joining the bricks, which are made from hemp straw mixed with lime, put in a mould and dried.   The bricks are extraordinarily light.   Ordinary straw is very similar to hemp straw, but with one big difference, hemp straw can breathe, so it redistributes air and consumes carbon dioxide, at the rate of 44 kilos per square metre per year.  Altogether there are 4000 square metres of wall, and no temperature control in the cellar as that happens naturally.   The floor is concrete for reasons of hygiene and weight.   An alternative would have been lime, that that can crack, which would give problems with bacteria.     As for the vegetal roof, you buy it in rolls by the metre like a lawn.  Bertie is also considering a vegetal covering for the outside walls.  In the cellar, there are barrels and tronconic vats, equipped with a chapeau flottant, so that they have a dual purpose, for fermentation and for élevage, and also unlined cement vats, and concrete eggs.  Bertie had wanted concrete vats without metals supports, and the way to achieve that is with eggs.   He has compared Grenache from a barrel and from an egg, and found the egg to be is more lively and fresher.

Bertie now has 47 hectares of vines all around La Livinière.  His first vintage here was 1997.  He has had vineyards in other parts of the Languedoc, but these days is just concentrating on the Minervois.   And when did he know that he wanted to be a winemaker?  When he got kicked out of school, the rather smart public school, Stowe, for making beer.   He then went to Australia to work for Len Evans at Rothbury; spent time at Castello di Rampolla in Chianti Classico, and with Becky Wassermann in Burgundy and Christopher Cannan in Spain.   Then he came to the point when he wanted to be his own boss and make his own wine.   He looked in the Languedoc and really liked what he saw in the Minervois.  La Livinière has a reputation for the quality of its Grenache, with some splendid old vines.  Bertie’s vineyards range in altitude between 250 – 180 metres and he has been certified biodynamic since 2004.  Asked about the tipicity of La Livinière, Bertie suggested that was a delicate subject, and a difficult question to answer.  Every vineyard is individual; it depends on the wine grower.

Bertie makes a variety of different wines. There is a textured Grenache Gris, Brama, Vin de France, from young wines.  Les Anciens is mainly Carignan aged in 50 hl foudres for 15 months.  Bertie enthused about Carignan.  'It is a noble variety here, and it can stand up to the seasons'.    This had the elegant rusticity that is the benchmark of good Carignan, with some firm red fruit.  And there are three quite contrasting Minervois.   La Touge, Minervois la Livinière, is 60% Syrah, 40% Grenache Noir, with a drop of Carignan, with a vinification in concrete tanks, with a four-week maceration, and 16 months ageing in eggs and tanks.  For Las Combes, Grenache is the dominant variety, coming from 80 years old vines, with twelve months élevagein an egg.  And Les Amandiers, Minervois la Livinière, from Syrah, is fermented in large wood and then aged in new French barriques for sixteen months.

Thanks to Armit Wines, I have recently enjoyed, and indeed compared and contrasted La Touge with les Combes. 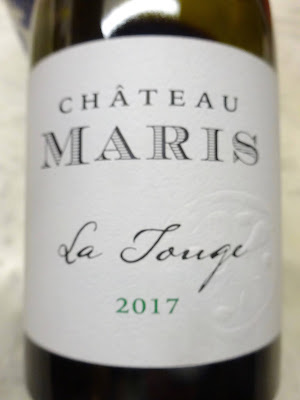 Deep young colour.  Ripe spicy berry fruit on both nose and palate, with a balancing streak of tannin.  Lots of red berry fruit.   A lovely depth of flavour.  Quite simply, the warm south in a glass, sunshine and garrigues, and all the more appealing on a cold winter’s evening with sausage and mash.  Nicely balanced and drinking beautifully. 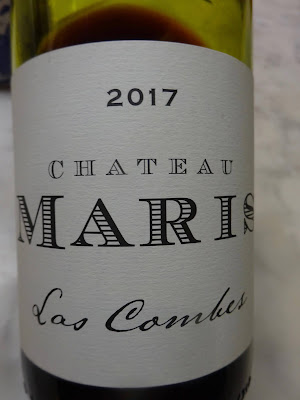 From old vine Grenache, and making a very appealing contrast with la Touge.   The colour is much lighter, as you would expect from Grenache.  And there is a wonderful liqueur cherry note on the nose, which repeats on the palate with a streak of tannin.  Medium weight.  A touch of alcohol on the finish and indeed it does reach 15°, but none the less retains its balance.  A touch of cinnamon and spice, with elegance and depth.

Teqnic said…
Hi thanks for sharing nice information.
if you are lookingpersonal trainervisit my site.
25 January 2021 at 07:33

aAae said…
Are u a men ....who becomes fatty ,bulky...and then now yr career is on the line ..? can't get married ?
Can't get any result from Gym?felling uncomfortable about yourself >? dont get time to go to the gym ?
having break up with yr girlfriend or cant involve in a relationship for yr fatty figure ,...
here is a solution for u !!!!!!!!!!!!!Now u can loss weight and burn fat @ yr own house !!!!!!!!
it's not necessary to go to the gym anymore.Fitness Ausbildung Shopmy Fitness training can help u look younger ,get fit ,and get back in shape.
!!!!!!!!!!!!!!! @ your own house So what are you waiting for Feel free to call me .at yr home i m offering fitness training both for male and female @ your own home !!!!!!!!!!
so get fit and change yr life ...get back yr youth again .!!!!!!!!!!!!!!!!!!!!!!
I'm Here To Talk To All About Your Fitness! You Can Never Ignore Your Fitness That's The One Thing Is Important Part Of Your Life! If You Think That It's Too Late To Start And Too Late To Be Concentrated On Your Fitness Then I've To Say Obviously You Are Wrong! You Can Start From Now.......
And I'm Here At Your Service With All Kind Of Fitness Prospectus!! If You Need A Guide Who Can Able And Highly Experienced To Show You The Right Path Of Gain Of Your Fitness Goal Then You Are On A Right Place!!

amanatullah said…
It's an unimpeded opportunity for people of first nations background to be, one,
financially independent, because there is a good living to be made from first nations artwork
and second, it offers a preservation of the traditional arts and Amazing Art
4 March 2021 at 11:00

shan said…
Nowadays it is like a fashion to make amd-ryzen-3rd-gen-threadripper stylish comments on any posts on Facebook. People love stylish and long comments as these look attractive. Demand for stylish comments is increasing due to its charm. And we can’t ignore your demand.
14 March 2021 at 17:53