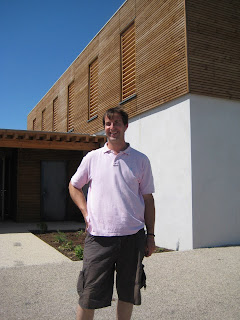 Our local caviste observed recently that new estates are spawning like mushrooms around here, and how right he is. They seem almost impossible to keep up with. Driving between Fontès and Neffiès the other day, we spotted a brand new cellar, an elegant construction in pine, and quite unlike any traditional Languedoc cellar. Further investigation revealed it to be Allegria, a new venture set by Ghislain and Delphine d’Aboville, with an Argentinean partner, Roberto de la Mota, who in the coincidences of a small world, I had met on a trip to Argentina last year, at his own estate, Mendel, in Mendoza.

Ghislain explained that he had worked for LVMH in Geneva for eight years and had met Roberto as they market Bodega Terrazzas de los Andes, the estate that Robert created with Pierre Lurton. Hence the Argentine connection. And in 2003 Ghislain decided that the time was ripe to fulfil his ambition to turn wine maker, so he studied in Montpellier and worked vintages in the Pic St. Loup and Argentina, and then took the decision to settle in the Languedoc. And why the Languedoc? In his words; it is easier de se faire connaitre. Burgundy is inaccessible. He likes the culture, the Mediterranean climate, the diversity of grape varieties and the style of wine. Everything is much more open. His first vintage was 2008, made at the nearby AXA property, Domaine des Belles Eaux, as were the 2009 and 2010 vintages, as the new cellar was only completed this year. It is built in the middle of his vines, following ecological precepts, in a contemporary design. The wood is Douglas fir which resists heat and humidity. And the inside is the essence of simplicity with unlined concrete vats – Ghislain considers a resin lining to be a possible source of contamination. He wanted to able to do manual pigeage – it’s softer than remontages – and you need enough space above the vats.

Altogether he has nine hectares, in the neighbouring villages of Caux, Neffiès and Fontès, in one large block at the foot of the le volcan des Baumes – the soil is quite varied, with clay, basalt and gravel. He has Roussanne and Marsanne for white wine, and is planting Vermentino, with Syrah, Mourvèdre, Cinsaut and Carignan, but no Grenache for the red wines. The vineyards are undergoing conversion to organic viticulture and should be certified later this year. 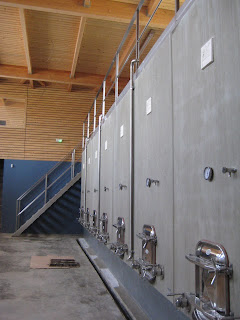 We tasted his first vintages.

2008 Tribu d’A Blanc – 10.00€
A blend of Marsanne and Roussanne. The Marsanne is fermented and aged in barrique and the Roussanne in vat. Light colour, delicate white blossom on the nose. The freshness of the Roussanne and a touch of wood on the palate, but nicely integrated. Rounded with some fruit, hints of fennel and a slightly bitter finish. Nicely balanced, and satisfyingly intriguing. It is labelled Coteaux du Languedoc and Ghislain observed that the Comité des Vins du Languedoc is now considering keeping the appellation Coteaux du Languedoc. I had thought that it was set to disappear next year. On verra.

I asked about the name. Ghislain explained that Allegria is a project between two families and that it is a name of the south, for joy, la joie. They wanted to convey the sense of une aventure humaine.

They made just 1000 bottles of this. It has some lovely fresh cherry fruit, on both nose and palate. Classic Cinsaut, redolent of fruit, with a fine balance of tannin and acidity. Enormously appealing and beautifully fresh. No sulphur was used in the wine-making. Ghislain observed that the alcoholic fermentation produces sulphites naturally, and that for un vin naturethe maximum sulphur level is 10 gm/l.

2008 Tribu d’A - Allegria, Pézenas – 9.00€
70% Syrah and 30% Mourvèdre Good colour; quite firm and peppery on nose and palate. Some attractive fresh fruit, with cherries and pepper. Good structure and youthful, with a streak of oak. One third of the blend was aged in barrel, so the wine needs a little time. Good balance and potential.

2008 Carignan Vin de pays de Caux - 14.00€
Classic vinification, with the aim of a wine to age. Élevage in oak for all the cuvée, over two winters, in barrels of one fill. Bottled in March 2010.
Medium colour; closed nose. Quite firm and structured on the palate. Some underlying fruit, but I found the oak slightly flattened the fruit, whereas Ghislain was aiming to soften the underlying rusticity of the Carignan. Maybe the next vintage will include a percentage in vat.

The full range consists of two entry levels wines called Petits Bonheurs, a rosé from Cinsaut and Syrah, and a red from Syrah with a little Mourvèdre. Then there are the two Tribu d’A wines, and some experimental single vineyards, currently the Cinsaut and the Carignan. And finally there is Cousu Main, meaning hand made, a finely crafted Coteaux du Languedoc that only comes in a magnum or double magnum. Ghislain is very insistent that recevoir, giving visitors and clients a warm welcome, will be part of the philosophy of the estate. They are planning a restaurant, and also developing a two day programme whereby people can come and create their own blend. Ghislain has a keen sense of marketing, which can be rare in the Midi, and deserves to go far. 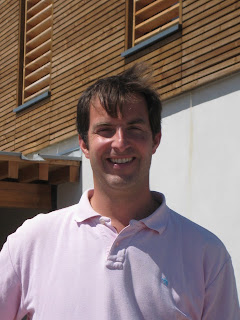 Graham said…
Having cycled past the building site of this cellar many times I have to say I'm very disappointed that it's been allowed to be built and ruin such a nice rural spot - however sympathetic it may look.

Mark said…
I bought a couple of cases recently of the Tribu d'A 2008 red. A very well balanced wine that is both fruity and spicy. I served it to some friends the other evening, and they also enjoyed it, so much so that they've asked me to pick up a case for them the next time I'm passing!
31 July 2011 at 11:43