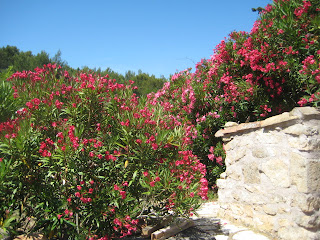 Marlène Soria’s directions were very precise. You take the dirt track by the fire station in St. Pargoire, and follow the telephone wires. And that is just what we did. And after about four kilometres along a bumpy dusty track, we reached a magical spot, a haven of flowers, with a small house and cellar, nestling in the hillside.

Marlène and her husband bought their property back in 1973 as a holiday home. They planted a small vineyard in the mid-70s, pour s’amuser, and in the early 1980s began to plant more seriously, Syrah mainly, with a little Grenache and Mourvèdre. By the end of 1987 she had 17 hectares of vines, and then stopped for planting for a while, and then she developed another vineyard of white, Roussanne and Rolle, and bought some nearby vines, to reach a total of 26 hectares, all in the commune of St. Pargoire. Altogether she has 70 hectares of land; the rest is garrigues, so that her vineyards are surrounded by shrubs, and do not run the risk of spray contamination from neighbours’ vines. She has been organic since the beginning. The vines are at an average of 220 metres, and the clay is clay and limestone, often red, with lots of stones. 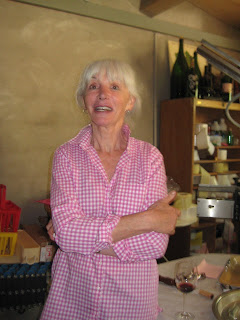 It has not always been easy. Marlène built a new cellar in 1997, and then discovered that she had a problem with vats that were contaminated by bad resin. Consequently no wine was made in 1999, 2000 and 2001, and the issue with the suppliers of the vats is not yet resolved. We chatted as we tasted. You sense that Marlène is very much her own woman; she has a strong but not flamboyant personality. She is self-taught and she has a very clear idea of the style of wine she wants to make. Her wines enjoy a long fermentation; with a bit of temperature control, but as she observed, she does not have any great technical resources.

2003 Clos des Cistes
Syrah with 15% Grenache. Deep colour; quite a rounded, rich nose, quite evolved. Lots of fruit of the garrigues. On the palate, rich and rounded, quite dense, tannins bien enrobés, - I am not quite sure how to say that in English – well fleshed out maybe? Quite leathery, Seamless with tannic streak. Depth and complexity. It was bottled two years ago. Marlène favours a long slow ageing. As she organic, rather than biodynamic, she says that she sees her wines changing according to the season, rather than the biodynamic calendar.

2003 Cuvée Leone
This is named after the former owner of the property. Marlène explained that a lot of Spanish had arrived here in 1936, and first lived up here in the hills and then settled in the village of St. Pargoire in the 1960s. Consequently there are several ruined buildings in the garrigues. The blend is Syrah, with 10% Mourvèdre. Originally all her wine was aged in vat, but she now has some foudres for Cuvée Leone. This is fuller, richer and denser, with lots of fruit noirs and garrigues notes. It is quite tannic, with a firm finish 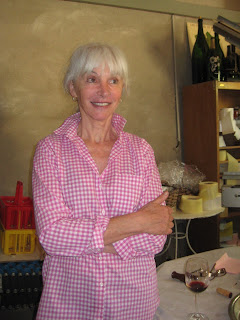 2003 Marlène No. 3
2003 was the first vintage of this cuvée; there is a little more Syrah than Grenache, and also a little Carignan. She blends as she picks, so that the assemblage is done at the harvest. Quite a smoky note on the nose. More red fruit; quite rich cherries on the palate, and quite a tannic finish. About a quarter of the blend is kept in a small foudre – 35 hls – for a couple of years or so. You sense that Marlène’s wine making is very empirical, with a finely attuned attention to detail, determined by a sensitive palate. 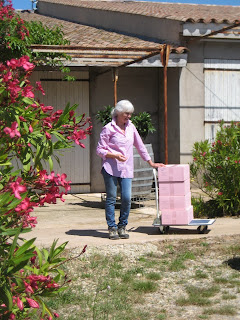 2002 Cuvée Schiste
Syrah is the dominant grape variety, with a touch of Grenache. And the wine has been given a long élevage. Medium colour. A certain meaty leathery note on the nose. More ready on the palate; quite supple with garrigues notes; drinking well now, with length, elegance and complex nuances of subtle flavours.

2002 Cuvée Leone
Quite a deep colour. A viandé note on the nose. This is the first year that Marlène used her foudres. Lovely elegance, garrigues and spice. Very rounded, complex, rich and elegant. 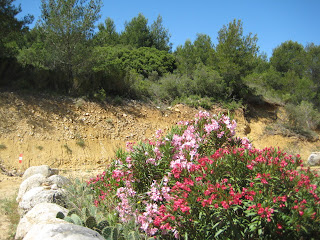 Marlène does not sell from the cellar door, but her wines are available at the Cellier de la Vigneronne in Faugeres and from Caves du 41 in Nimes. She suggested a price of 58€ for the 2002s, and 54€ for the 2003s. 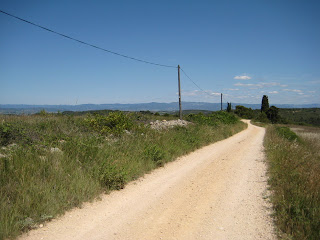 Postscript - The current edition of La Revue du Vin de France features 100 Grands Vins from the Mediterranean - not just from France but from Italy and all points east, to Cyprus and the Lebanon. Domaine Peyre-Rose is third in the French list, after Domaine Gauby and Domaine Tempier, and in 7th place overall.
Email Post

Anonymous said…
Is really awesome when you find someone living in a place like that, i work in xlpharmacy in downtown and when you just know the life in the city you forgot that there's a life out of the city.
6 December 2011 at 14:00

Andy said…
More prepared around the palate; very supple with garrigues notes
What can we do when we have many boring free time? How about try to get access to the online games? When we talk about the game, we need to talk about the WOW Gold. As the WOW is the world's most famous online game,all of us knows that we have to get the Cheap RS Gold to save money !
21 December 2011 at 06:42

Zak said…
Rosemary -- I love your blog and books, thanks for all your work covering the Languedoc.

I recently had a couple bottles of 1991 Peyre Rose Syrah Leone, and they were FABULOUS. I am wondering which other domaines from the region you'd consider as ageworthy and elegant?
22 January 2013 at 15:51

Unknown said…
Any idea how to get ahold of these beauties in the states? I can't even find a webpage for her domaine. Had a perfectly aged 2003 last year and I've been trying to find some more ever since!