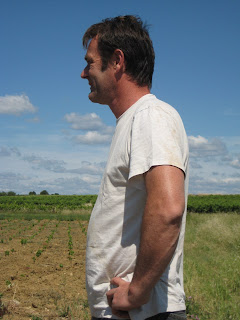 I had tasted a couple of Jean-François Coutelou’s wines in London chez Roberson’s and liked them enough to plan a cellar visit. Little did I know that I had a real treat in store. A couple of friends came with me, to his cellar in Puimisson. But first we went for a drive around the vineyards in Jane-Francois’s little white van. Alex was lucky, she got the passenger seat; Lits and I sat in the back on two large boxes, with two dogs competing for the space around our feet. – Jean-François’s Héro and Lits’ Milly. Fortunately they seemed to like each other. 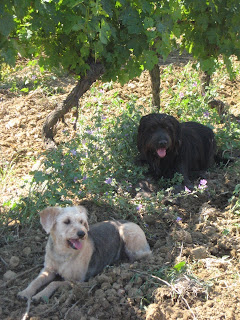 Jean-François explained that he has 14 hectares of vines, as well as 400 olive trees. His father planted his oldest vines back in 1966 and the estate has been organic since 1987. He was one of the pioneers of organic viticulture in the Hérault, when there were just seven organic wine growers in the department, with a total of just 40 hectares, registered with Nature et Progrès. We looked at various plots of vines – there was a wonderful fig tree, laden with fruit which would ripen in three stages – figues de fleur in June; another crop in August and the final crop in September – Jean-François explained that fig trees are an indication of underground water. The soil in his vineyards is mainly clay and limestone – some very red. It is all tilled and beautifully tended. He has Syrah, Grenache, Carignan, Mourvèdre, Cinsaut, and for whites Sauvignon, Muscat, a little Viognier – he has also planted some Grenache Gris, Macabeo, and grafted some Clairette musqué and Carignan blanc, as well as just 120 plants of Castet, a rare red variety which you also find at Château Simone in Palette.

Jean-François made pertinent observations about some of the neighbouring vineyards – he is surrounded by cooperative members – one has rows that are 800 plants long ….. Most of them use weed killer, ‘un petit coup de Round Up’. Another puts the effluent of the local sewage works on his vines, by way of fertiliser – you could not avoid noticing the smell in the breeze. Jean-François criticised another for practicing chemical defoliation, as opposed to manual leaf-plucking. Someone else produces Sauvignon with yields of 100 hl/ha. Another is converting to organic viticulture, but as Jean-François observed; in practice he is just after the subsidies; he is not looking after his vines properly; they were a forest of weeds and potential disease and in five years time when the subsidies come to an end, he will simply pull them up, and get another subsidy for replanting….He called it ‘la chasse aux primes’. It was quite an eye opener, and in contrast Jean-Francois’s vines were a picture of health, alive with insects and birds, and a hare running between the vines. 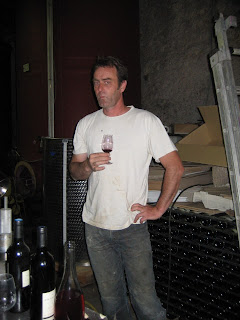 And back at the cellar in the village, glasses were produced. How many wines do you make? That depends on the year. First came a white; his whites tend to be ripe, but balanced with good acidity. Acidity is affected by the work in the vineyard and how you treat your soil. The wine was full and perfumed, with a hint of Muscat and some lovely textured fruit and good acidity.

2010 7 rue de la Pompe (his address in Puimisson) rosé - 6.00€
A blend of Cinsaut, Grenache and Mourvèdre. The Mourvèdre was saigné and the other two varieties pressed. It was quite a deep coloured pink, with ripe strawberry fruit and good acidity; ripe and rounded with a dry finish. Jean-François follows the precepts of the Association des Vins Natures and does not use any sulphur. If the grapes are healthy, the sulphur comes naturally. 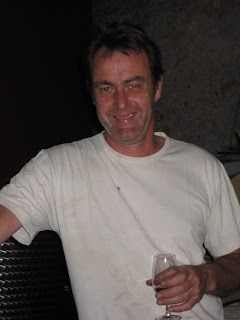 2010 red 7 rue de la Pompe was still in vat. It is a blend of 80% Syrah, with some Carignan and Grenache. It will be bottled by gravity on the last day of the descending moon in a month or two, without fining or filtering. And he has a barrel with a glass end so that he can see how troubled or otherwise the wine is – at that moment in the lunar cycle there should be very little lees in suspension in the wine.

Deep colour; firm dry spice on the nose. Lovely, peppery fruit. Very characterful and appealing . The price will be 5.50€

2010 Vin des Amis – 7.50€
A blend of Syrah and Grenache; sometimes there is also some Cinsaut and Mourvèdre. Good colour; some lovely fruit, reminiscent of liqueur cherries, which makes me think of Grenache. Pure, fresh fruit.

2010 A Touch of Class in a Glass – 60% Carignan and 40% Syrah. Another vat sample which had just been racked, but left on its fine lees.. Jean-François tries to avoid racking as it takes away the natural protection of carbon dioxide. This was a touch reduced on the nose, but the palate was delicious, with some peppery fruit and that rusticity that is the bench mark of Carignan.

2010 Le Vigne Haute – 11.00€ but tasted from vat.
A pure Syrah. Very perfumed; lovely fresh spice, peppery; more northern Rhône than southern. Lovely, long palate. Jean-François explained how he plays with macerations times – this wine had ten days. He uses whole bunches, if the stalks are ripe – they were in this instance – and does pigeage.

NV L’Oubliée – from demi muids. 15.00€ Half Carignan from the 2001 and 2007 vintages, and half Syrah 2009. In other words, a solera of red wine. Quite a perfumed palate; quite sturdy and very intriguing. Jean-François explained that he had been wanting to try a solera of table wine for some time – the reason will become apparent in a moment. It was quite unexpected and very original. He considers demi muids – 500 litres barrels – to be a good size for the Midi. 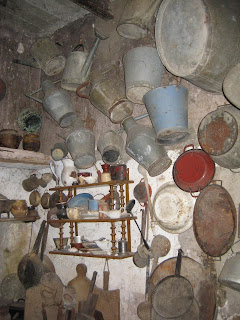 And then when we thought we had finished tasting, he said, ‘but you haven’t seen the other cellar’. Little did we know that he is a master of soleras for dessert wine, making the most deliciously matured Grenache, but without any mutage, or addition of alcohol.

We began with a 2007 Grenache, which has spent three years in barrel. It had a nutty orange nose with an intriguing palate, long and nutty with notes of biscotti di Prato, not unlike Vin Santo, with good acidity. It will be added to the solera system. 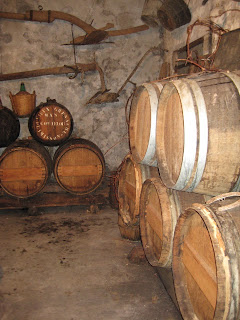 And then we carried on to taste a series of delicious barrels and my notes, for some reason, became less and less intelligible.

The next sample was amber in colour, quite sweet with some firm walnut fruit. The water evaporates and the flavours concentrate, with very good acidity. Beautiful length. 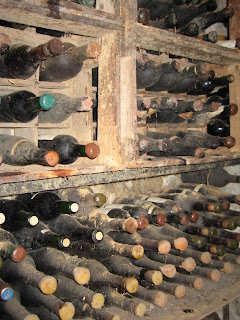 Next was a Grenache that was an average of 25 – 30 years old – with a firm nutty note; and a firm but rich palate.

The next barrel was fabulously concentrated, rich and rounded, quite sweet, with backbone, and wonderfully complexity.

The next barrel was amber coloured; quite sweet rich and nutty, rounded with great length and balancing acidity. Wonderfully nutty fruit. Average age about 25 – 30 years. I felt that I was beginning to run out of adjectives, and certainly superlatives.

The next barrel was an average of 50 years old, dry but rich, with very good acidity. Jean François suggested that it was like an old Armagnac or Cognac; I was tending towards old oloroso. It was the result of a traditional solera.

Faced with the next wine, I have scrawled: words fail me. Wonderful nuances; acidity length; very concentrated. .

And then we tried some Muscat aged in chestnut – called Hors d’Age and more like a PX or sweet Pedro Ximenez. Picked when it was very ripe so that it was unctuous and smooth, but with acidity. 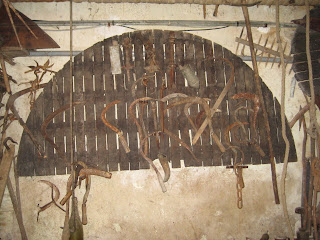 And the final wine was a fifty year old Pedro Ximenez - it was a deep chocolate colour, very rich and unctuous and chocolaty on the palate, rich and sweet with concentration and a streak of acidity.

And the cellar itself was a treasure trove of old wine artefacts, with walls covered with old vineyard equipment. As we left Jean-Francois showed us an old box that was used for sending a small sample of wine in the post. You put the stamp directly onto the box. And the taste of wonderful mature Grenache lingered in my mouth, almost all the way home. 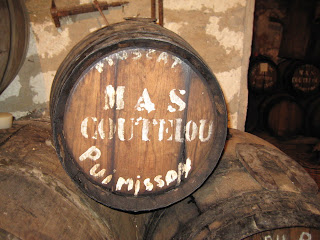 Andy said…
And the cellar by itself was a treasure trove of outdated wine artefacts, with walls covered with outdated vineyard equipment.
How can we WOW Gold for sale through the internet? We must make it safe and trust those people who buy our's products, and we can
Buy WOW Gold of other games.
21 December 2011 at 06:44

Unknown said…
MarY, they are sold by Leon Stolarski Fine Wines. You'll find him on the internet
6 September 2015 at 18:25