HELPING ON THE BOTTLING LINE 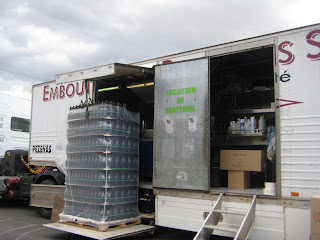 When a bottling line gets mentioned on a press trip, I tend to take a rather jaundiced view – been there; seen that, umpteen times before. A bottling line is a bottling line, but when you find yourself a participant, rather than audience, it takes on quite a different aspect. And that is just what happened to us yesterday. Our friends, Deborah and Peter, at Mas Gabriel, were bottling their red wines, Les Trois Terrasses and Clos des Lièvres, 8500 bottles in all. 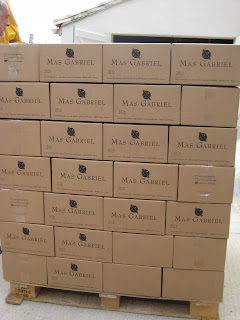 The bottling lorry was booked months ago and Deborah and Peter were praying for fine weather, well at least for no rain. The gods were relatively kind; it did rain but only first thing in the morning. By the time everything was set up, the rain clouds had gone. However emergency tarpaulin had been procured, just in case. The bottler, Daniel, works on his own, so it is up to Deborah and Peter to find the team for a smooth operation – twelve of us in all. 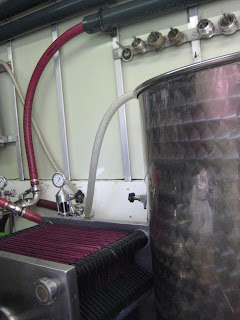 We had house guests so could not arrive till mid-morning, by which time a good part of the Trois Terrasses was bottled. I joined my friends, Tuk and Sharon, at the carton preparation end of the line. Cartons to be marked, folded and handed up to the packers, as quickly as the bottles came down the line. Then there was technical hitch – not enough dividers – berceaux or cradles as they are more poetically called in French. A frantic phone call to the supplier – it was nearly midday – please would they stay open while Peter broke the speed limit on the motorway for a quick dash to Servian – and so a lunch break was declared. Deborah had spent most of the previous day cooking , delicious salads and cold cuts – a bottle or two of rosé, and some homemade ice cream – and at one o’clock we were back on the line. I was promoted from carton marking to passing them up to the packers – you have to stay alert and avoid the temptation to day dream, and then my shoulders started to ache, so Tuk took over, and Sharon and I chatted while folding cartons. 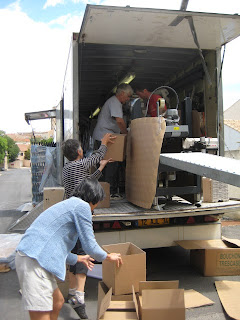 The Trois Terrasses was all bottled, and we had a changed of carton size for the Clos des Lièvres – and a pause. Deborah checked the new wine and we were off again. Meanwhile my husband, Christopher’s help was enlisted to hand bottle twelve bottles straight from the vat. Deborah and Peter’s oenologist is cautious; he thinks Clos des Lièvres needs a light filter before bottling; Peter and Deborah would like to prove him wrong, or at least justify their conviction that the wine would taste even better without filtering. So twelve bottles were put on one side to follow their evolution, and to compare with the filtered wine. 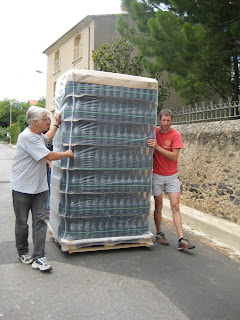 Out in the street our main problem was the wind – a sudden gust scattered cartons down the road. And another hazard was traffic – the lorry was parked out in the street – no room in the cellar; most drivers slowed down and indeed stopped to pass the time of day, but one or two maniacs behaved as though we did not exist. 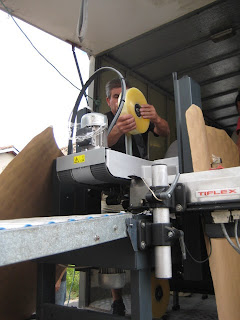 And then another interruption – the sellotape that sealed the bottom of the cartons got caught up and need disentangling – and off we set again, keeping up the pace. And the cartons were piled up on pallets. Christopher appeared with an enormous roll of heavy duty clingfilm, to wrap the pallet. This was a sight for sore eyes; he can’t manage clingfling in a kitchen, but cellarsize it seemed to prove no problem. 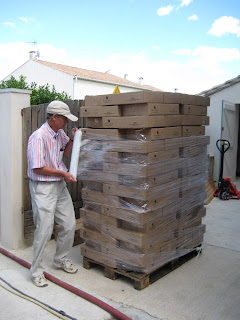 And suddenly Peter emerged from the cellar with the end of the hose; we were almost done. 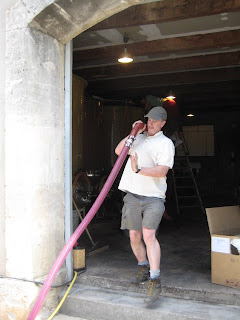 And the last pallet was squeezed into the cellar. And then it was time for tea time, chocolate cake – and the tea was quickly followed by a delicious glass of Château Peyrade’s Muscat de Frontignan. It went well remarkably well with the chocolate cake. And Deborah and Peter relaxed as the initial stress of the day evaporated - bottling is stressful for it is the culmination of your year’s work. 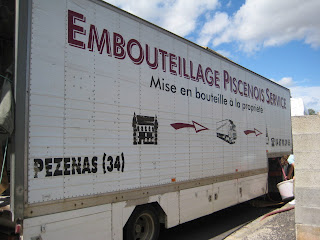 michelecolline said…
For anyone who has not helped in bottling, it must be said that it is the most boring part of wine production.
22 July 2011 at 17:09

Rosemary George MW said…
Boring to an observer, yes, but for the wine grower it is the culmination of a year or more's work. I can't tell you how visibly relieved Deborah and Peter were when it was all over.
30 July 2011 at 09:29

Anonymous said…
Yes indeed. It's just like any field of craftsmanship, really. Your work and the time and effort you put in to create a bottle of wine... you're talking about a long process with so much activity. There's an anticipation that won't even end until you finish the bottling process.

alex said…
You have worked nicely with your insights that makes our work easy. The information you have provided about where to buy record mailers is really factual and significant for us. Keep sharing these types of article, Thank you.
3 January 2022 at 08:33