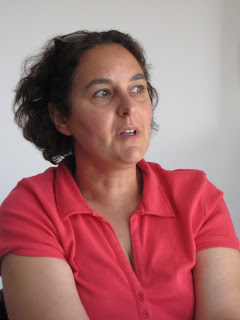 I spent a happy afternoon in the Minervois last week with Anne Gros. Normally you would associate the name Gros with Vosne Romanée – there are several members of the family making elegantly refined Burgundy on the Côte d’Or, but Anne and her husband Jean-Paul Tollot, who are each involved with their own family estates, also wanted to make wine together. And they looked for vineyards in the south, first in the Var, and then they considered the Costières de Nimes; they fell for the hills around Aniane, but couldn’t find what they wanted; there was a property for sale in Cruzy, in St. Chinian, but that wasn’t right either; nor was one in Boutenac and then they arrived here, in the hills of the Minervois outside the hamlet of Cazelles. It is not even a village – the population is just 30 people. Anne enthused; they felt une énorme emotion, but it was so far from Burgundy, a five hour drive – and there was also a cellar for sale, but what a horror. So although they found their vineyards in 2006, they did not actually take possession of them until 2008, as their purchase depended on planning permission for a smart new cellar. 2008 was their first vintage in the Minervois. 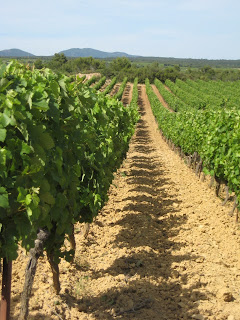 I always enjoy seeing vineyards – that way you really get a sense of place and terroir. Anne began with eight hectares, which have grown to twelve, with a further purchase of land to plant. They have Cinsaut, Grenache, Carignan and Syrah, but no Mourvèdre. They had wondered about planting Mourvèdre, but it doesn’t ripen –‘it would be idiotic’. It ripens three weeks later than Carignan, and that is already a late ripener. They also wonder about white grapes, as the climate is assez rude, and the altitude is the same as Vosne Romanée, at 220 metres. Maybe Chardonnay; maybe not.

We admired various plots of vines, all beautifully tended, with barely a weed in sight. ‘Grass provides competition for water, a concurrence hydrique, which will detract from the quality’. They use no weedkiller, but they are not organic. ‘Copper is even worse than chemicals', which will degrade. Copper doesn’t. The main problem is vers de la grape, and they can also get oidium. It was cool at flowering, so some of the vines have coulure, but that doesn’t matter as they aim for low yields – 35 hl – 40 hls /ha. Anne enthused about Cinsaut – she finds its elegance comparable with Pinot Noir – it is much easier than Syrah, which needs a lot of work. Cinsaut can develop very large grapes, they look like tiny footballs, but they don’t have a lot of juice, unless it rains heavily. They work on keeping the vines well ventilated; good aeration is essential - they do an ébourgeonnage in May, which is usual in Burgundy, but not in the Languedoc. They remove leaves, and tiny grapillons. You sense that the vines are given an enormous amount of TLC. 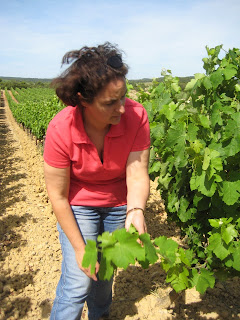 And she enthused about the diversity of soils, c’est ça qui nous a plu. This is the continuation of everything that we have learnt in Burgundy. And she loves Carignan – that is what is keeping us here - with its structure. She has some very old Carignan, a vineyard with stone walls on three sides, and vines that are a venerable 104 years old, and another plot that is 102 year old, while her youngest vines are 10 year old Grenache, south facing on very stony soil. Three of her wines are named after plots of vines, and as a Burgundian she is particularly excited that they have bought a plot called les Combettes. Everything is handpicked, by a team from Béziers, who are paid by the hectare, rather than by the weight of the grapes, which is the usual practice in the Midi. 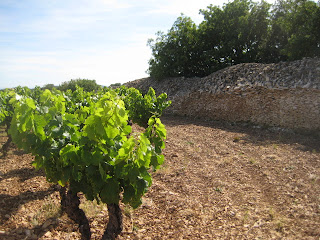 We soaked up the sunshine, and the noise of cicadas was deafening. And then we returned to taste around her kitchen table, first the 2009s and then their first vintage, 2008. She does not sell from the cellar door so prices are the recommended retail price for a wine shop.

2009 La 50/50 Anne Gros / Jean Paul Tollot, vin de table 11-13€
The name is simple – they are sharing the adventure. And for reasons of grape variety mix, only ten of their twelve hectares are classed as Minervois – two are vin de table, as they have no Mourvèdre, and a lot of Carignan and Cinsaut. This is a blend of Grenache, Cinsaut and the younger Carignan vines, which are thirty years old. All are destemmed, and the élevage is in vat, with no wood. The wine is elegant, with almost a Burgundian silkiness. There was freshness, minerality, dry spice, some red fruit, elegance and a lovely balance.

2008 La 50/50 - This is a cooler vintage than 2009. Medium colour. Quite firm, fresh peppery fruit. Good acidity as well as tannin on the palate and less body than 2009. A certain austerity, but none the worse for that. 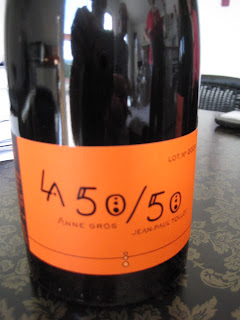 2009 Minervois, Fontanilles 14 -16€ Fontanilles is a place where there is water, maybe a spring or fountain. A quarter each of Cinsaut, Grenache, Syrah and Carignan. All the Syrah is aged in wood, and most of the Carignan, which amounts to about 30 per cent of the cuvée. The vines for this are north facing and there is a definite freshness to the wine, with some tannin and an elegant lift on the finish. It is very harmonious and rounded.

2008 Fontanilles Quite a closed nose, Medium weight. Some peppery spice on the palate, with an attractive tannin edge and very good fruit. Youthful and fresh.

2009 Minervois la Ciaude – 20- 23€
This is a south-facing plot, on clay and limestone, including Syrah, old Carignan and young Grenache. The stones give heat, while the clay stays fresh, so although, as the name implies, it is very hot, the vines do not suffer from water stress. The Carignan and Syrah all go into wood, making a total of about 60% oak élevage. There is a hint of vanilla on the nose, with some firm fruit, with a rounded palate, with firm tannins. Youthful and fresh, with fine potential.
Anne mused: perhaps la Ciaude could be a monopole, as in Burgundy, 'mon petit Clos Vougeot'. There is more clay in Clos Vougeot, and more limestone here.

2008 Minervois la Ciaude Good colour; silky nose with hints of tapenade. A certain freshness, combined with spice, and a lift of acidity as well as tannin. Long rounded finish.

2009 Minervois les Carrétals -27€
In theory Minervois should be a blend of at least two varieties, but this comes from the 104 year old Carignan, and for obvious reasons there is no mention of Carignan on the label. It is all aged in wood. The nose is quite firm with some oak and red fruit and on the palate there is a peppery edge, with some firm fruit. It is youthful, with enormous potential. I was fascinated that a Burgundian was giving Carignan, once a much decried grape in the Languedoc, so much love and attention.

2008 Les Carrétals Quite deep colour; smoky oak nose with quite a firm tannin palate, balanced with red fruit. Quite spicy. Elegance oak that is nicely integrated, but the wine is still youthful and fresh. Definitely worth ageing in bottle, as are all these wines. Most ready to drink is the 50/50. And both the labels and the plaster of the cellar walls are a warm orange – as Anne observed, the colour of the Carignan leaves in autumn. 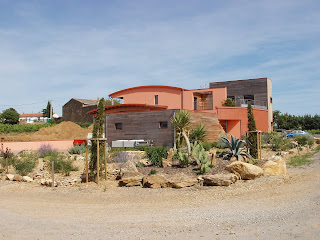 michelecolline said…
Do they carbonic macerate any of the carignan?
5 July 2011 at 00:13

Rosemary George MW said…
Carbonic maceration was not mentioned - so I think not - though I realise that my notes have not specified. It's great for Carignan when you want to produce something accessible and gouleyant, but possibly not so suitable for a wine with the aim of a longer life span.
5 July 2011 at 15:43

michelecolline said…
Just wondered; I had what I considered a fantastic old vine carignan while visiting this past May and they do a 50/50 carbonic/normal fermentation.
5 July 2011 at 16:10

Rosemary George MW said…
Made by who?

michelecolline said…
Plo Roucarels 2008 carignan vin de pays de la cite' de Carcassonne...they have a website. An Englishman at L'Atelier des Vignerons in Limoux recommended it to me.
7 July 2011 at 01:10