A DAY IN THE MINERVOIS - Part 1 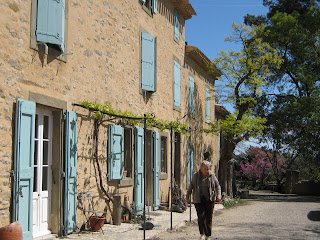 First stop – Clos Centeilles outside the village of Siran. I always enjoy seeing my good friend, Patricia Domergue. She and her husband, Daniel, developed their estate in the 1990s and these days it is Patricia who makes the wine, and their daughter Cecile is showing signs of wanting to follow in her parents’ footsteps. Daniel and Patricia are passionate about old grape varieties and particularly about Cinsaut. Unwisely I asked her about the regulations for percentages of grape varieties in Minervois to which her reply was: I can’t possibly tell you; hardly any of my wines conform to the rules.......! Their vineyards are around the little chapel of Centeilles, which is worth a visit for its unusual medieval mural of the pregnant virgin.

2009 Cotes de Brian Blanc. 13.20€
Brian is the name of one of the small rivers that runs through the Minervois. And this comes from three grape varieties of 18th century origin, which have almost been lost from the Languedoc, namely Ribeyrenc Blanc and Gris and Araignan. Patricia is also planning to plant Clairette rose and Picpoule rose. A yield of 20 hl/ha. 2007 was the first vintage of this wine. 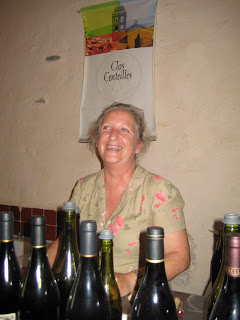 Some colour; quite a herbal nose with a resinous hint. Nice texture on the palate, with good acidity. Some herbal notes and again a slightly resinous note. No wood – I thought there might have been some from the taste. Some white blossom. White Châteauneuf du Pape is Patricia’s inspiration.

2007 Carignanissime – 8.60€
I’ve always had a soft spot for this pure Carignan, even though Daniel is sometimes quite dismissive of the grape variety. If you can make good wine from Carignan, just think how much better your wine would be from another variety! Medium colour, with red cherry fruit. Medium weight; fresh fruit, with an appealing rustic edge. Patricia, however, asserts that the Languedoc; c’est la terres des assemblages. Her vineyards are in the cru of La Livinière, with slightly lower yields than for Minervois, 45 as opposed to 50 hls and a mandatory élevage of twelve months. 440 hectares are declared currently as La Livinière. 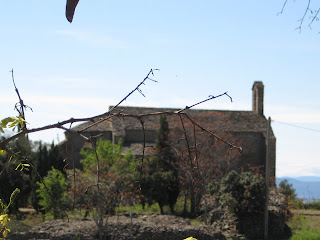 2007 Campagne de Centeilles – 9.60
Cinsaut with just 5% Syrah. That certainly doesn’t conform to the regulations, but hitherto it has depended upon what you have in your vineyard, but things are threatening to change. Medium colour. Quite warm dry spice on the nose. Elegant supple fruit. Dry cherries and dry spice.

2006 C de Centeilles – 11.65€
Some more old varieties here, namely Ribeyrenc rouge, Oeillade, Picpoule, Morastel, which are all fermented together. Some dry cherry fruit and some intriguing spice; more leathery, with a touch of pepper. Good structure and quite intriguing. Patricia observed that on its own Morastel is very tannic and needs blending. This wine was long and elegant. 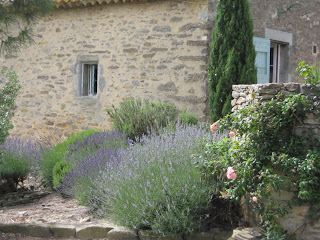 2002 Clos de Centeilles – 15.20€
This is classic Minervois la Livinière, a blend of equal parts of Syrah, Grenache and Mourvèdre, with 10% of the blend aged in barriques. Patricia starts the assemblage at vintage and always ferments at least two of the grape varieties together. Her vineyards are all in the cru of La Livinière, which demands slightly lower yields than for Minervois, 45 as opposed to 50 hls and a mandatory élevage of twelve months. 440 hectares are declared currently as La Livinière.

Medium colour. Some sous bois – the Mourvèdre comes out on the nose. A note of maturity, nicely evolved, with lovely fruit, and some vegetal notes. Long and fresh; lingers on the palate with a cedary finish. An example of just how well Minervois can age.

2003 Capitelle de Centeilles – 17.00€
Pure Cinsaut. 55 year old vines. Some dry cassis on the nose and a certain ripeness and warmth. Spice and cherries, a touch of liqueur cherries. The warmth of the heat wave year, but not excessively so, as there is freshness behind the warmth. A long finish.

A lovely range of wines. Clos Centeilles deserves to be much better known than it is. 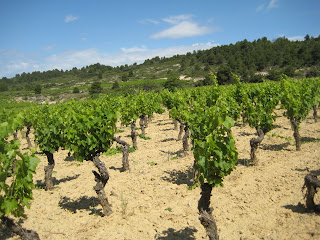 Then we went to see the next door neighbours at La Rouviole, where Franck Léonor makes the wine. His grandparents came from Portugal and bought the estate in 1956. They made just 400 litres that first year, and until 2000 the family sold everything to the négoce in bulk and also delivered grapes to the village cooperative. 2000 was the first vintage they bottled themselves. They have Syrah, Grenache, Cinsaut and Carignan but no Mourvèdre. Franck admits to being self-taught; he came to wine after an earlier career as a teacher of history and geography. He gave us a comprehensive tasting. His Cuvéee Classique la Rouviole is mainly Cinsaut and Syrah with a little Carignan and Grenache and is refreshingly unoaked, so this was the wine that I liked best, with some spicy peppery fruit.

2008 Sélection, a blend of Syrah and Grenache with a little Cinsaut spends time in oak, with the Syrah in new barrels. The oak and vanilla dominate the palate. Franck observed: this is the sort of wine I was brought up on, as his early wine drinking years were spent in Bordeaux and for him it was not too oaky, but it was for me. His years in Bordeaux lead him to favour a strong oaky flavour, with a long élevage, and he has also planted some Cabernet Sauvignon.

He then very generously opened the 2000 vintage of the same wine. It had some cedary maturity with a touch of tapenade and some leathery notes, and had aged well. 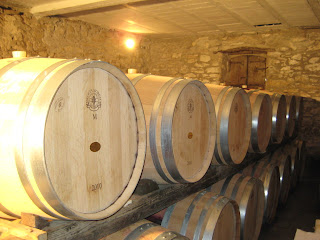 Franck also likes making micro-cuvees each year – he doesn’t want to get bored, he said.

2008 Le Revenant – 10.90€
A pure Carignan initially and then he felt that a bit too experimental and added 20% Syrah. I actually thought that it had more of a taste of Cinsaut, but with an edge of oak, including some American oak.

2008 Minervois la Livinière – 15.00€
A blend of Syrah 75% and Grenache 25% Oak aged, including some new barrels for the Syrah. Sorry, Franck, but the oak was too much for me, with solid rounded flavours. Tannic and youthful.

And the oak was even more apparent in the 2007 vintage, with dense oaky fruit, and some tapenade notes. And in 2006 there was vanilla, as well as dense oak. I did feel that the wine had not even begun to digest the oak. 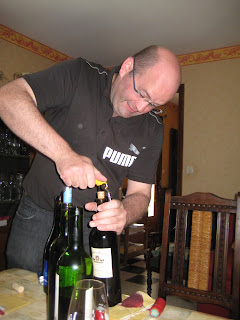 And we finished with the 2001, the first vintage of La Livinière, which had been made by Franck’s uncle. Deep colour, with some herbal notes. Nicely evolved, with some tannin and some tapenade. In conclusion, the wines were well made, but not to my taste.

And then we adjourned to Les Meulières, the friendly village restaurant in the square in the centre La Livinière, for some more solid refreshment.

Graham said…
Ribeyrenc used to be a synonym for Aspiran. It is described as that in Liz Berry's 2002 book The Wines of Languedoc-Roussillon, but presumably those who decide such matters have decided otherwise. All of this may be micro-detail of course, but it has some interest if one lives in the village called Aspiran.
Next challenge will be to get hold of a bottle.
1 September 2011 at 10:50

Rosemary George MW said…
Thank you for drawing my attention to that synonmyn. I wonder what Jancis will come up with in the new edition of her book on grape varieties.

Graham said…
I've never seen Aspiran mentioned on the coop picking schedule over the years, nor has it ever been mentioned by anyone. I'll ask a vigneron in the village.
2 September 2011 at 15:17

I hadn't heard anything about your friend, does Patricia's knowledge has something special? I would like to do an interview with her. My blog talk about wines and beers and it'd be nice if she can be able to us.
5 December 2011 at 20:10

Anonymous said…
I think expensive wines are not always the best ones... I know because I had an experience (a negative one) not so long ago when I visited xl pharmacy wineyards in Montpellier.
6 December 2011 at 19:54