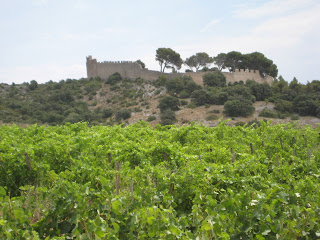 The village of Montpeyroux attracts more than its fair share of newcomers to the wine industry. One example is Villa Dondona, created by a talented English artist, Jo Lynch, and her French husband, Andre Suquet, whose previous career was in medicine. Back in 1998 they bought fifteen hectares of garrigues, just outside Montpeyroux, above the little hamlet of Le Barry. And in 2000 they decided to plant vines, Grenache, Syrah and Mourvèdre. André particularly likes Syrah, and Jo Mourvèdre. Their first harvest was 2004, with just a tiny amount of wine, but none the less and much to their surprise, they won a gold medal. Jo asserts that they were not originally thinking of making wine, and then they looked for an estate that they could improve, and instead they have created something new. Then five years ago they planted vines for white wine, Vermentino and, Roussanne and acquired small plots of Grenache blanc and Marsanne that were going to be pulled up. The first vintage of l’Espérel, the 2010, won a trophy at this year’s Concours de la Vallée de l’Herault. (see a posting earlier this year) 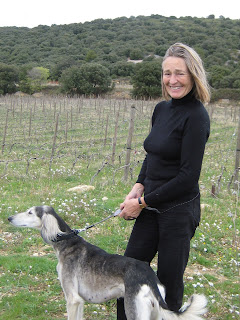 A drive through the vineyard reveals a dramatic site, with the ruined castle of le Castellas above. The plot is shaped like a fan, with several different soil types, including marnes, and red clay, which is better. The vines are trained low, and planted close together, with 8000 vines per hectare, and 70 cms between the vines in each the row. The Vermentino is grown on a pergola, to protect the grapes from the sun, and the direction of the rows is determined by the dominant wind.

They have a small cellar carved out of the hillside, with stainless steel vats and some barrels of 300 litres, and also 270 litres, which apparently is the traditional size for the Languedoc. They come from a cooper in Paulhan.

We sat outside the cellar, tasting, in uncertain summer sunshine, defying some threatening clouds.

2010 Montpeyroux Rosé, Esquisse – 5.50€
Pale orange pink, gris in other words. Delicate nose. Very fresh with good acidity. Delicately rounded but firm palate. A hint of dry raspberries. Pure Cinsaut. The grapes are picked early and pressed immediately; they use carbonic snow in the press to avoid any oxidation. Fermented in stainless steel at a cool temperature. 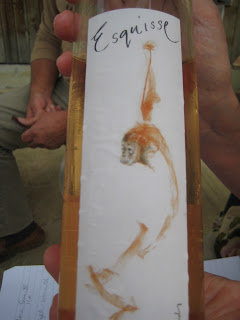 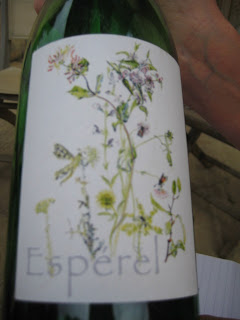 2005 Dame Mourvèdre – 18.00€
As the name might imply, a pure Mourvèdre. The bottle shape is unusual, a medieval shape, said Jo and she has designed a very clever label, with a line that you could interpret as a line of hills, or maybe a female nude, depending on when you look at it horizontally or vertically. My atempt to photograph that label failed completely.

The wine is kept in vat rather than barrel. This 2005 was bottled in 2007. They have only made it twice in 2005 and 2007, because the Mourvèdre was particularly good those two years. Mourvèdre must see the sea and from their vineyard you can just make out Cap d’Agde in the distance. Medium colour. Smoky red fruit, but no oak. A tannic streak; quite a sturdy palate. Ripe cherry fruit. Medium weight. A slight viandé note. Still very young.

2008 Villa Dondona, Montpeyroux- 9.50€
A blend of 40% each of Mourvèdre and Syrah with 20% Grenache. Kept in vat rather than barrel. Medium colour. Very perfumed nose with a smoky note on the palate. Perfumed pepper palate, with firm tannins, ripe fruit and a rounded finish.

2006 Villa Dondona – the same vines and assemblage, but 2006 was a warmer vintage, while 2008 enjoyed a cooler than average August.
Medium young colour. Heavier nose, more confit. Quite a perfumed palate; balsamic notes. Quite tannic with some savoury fruit. I preferred the freshness of 2008.

2008 Oppidum Montpeyroux – 15.00€
60% Mourvèdre, 40% Syrah and one year in wood, one third new.
Medium colour; some smoky oak, a hint of vanilla on the nose and palate. Quite chewy oak, rounded, and quite dense and powerful. Some tapenade fruit, and still very young.

And our tasting finished just minutes before the heavens opened. 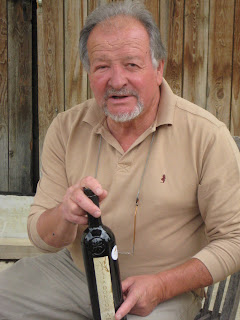 Anonymous said…
I have a coworker in xlpharmacy that her parents have a place like this in the mountains and she really knows about wines. I always ask her about recommendations but i guess that is done, your blog is very well done.
6 December 2011 at 16:27