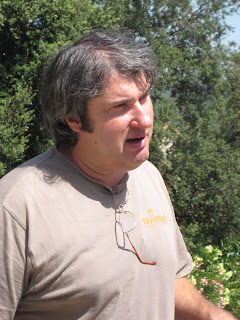 Simon Coulshaw at Domaine des Trinités is one of the new rising stars of Faugères, an appellation that is attracting more than its fair share of newcomers and outsiders. Simon worked in IT for 20 years, often abroad, but maintained his interest in wine, which had been encouraged by his father. Then it was time for a career move and in 2004 he began a two year wine-making course at Plumpton in East Sussex and did seriously consider buying land in Sussex. However, his passion is for southern red wine, so he began looking in the Midi, as well as in Spain as his wife comes from Barcelona. Altogether he visited 107 properties before finding what he was looking for, in the village of Roquessels. Why so many rejects? Sometimes the terroir was not interesting – there is no point in buying vineyards on the plain. Or if an estate was already doing well, there was nowhere to take it; he wanted to create a reputation of his own. Essentially he was looking for unrealised potential. And so he arrived in Roquessels in April 2007, with 15 hectares of Faugères and 9 hectares of what is now the cru of Pézenas, after its reclassification. The cellar is neat and well-equipped; and for his first vintage he made ten different wines. Last Saturday I tasted some of the current wines, but not all. Simon loves trying out new things – he is working on a Syrah, with a little Viognier, like Côte Rôtie. You may be able to do that in the northern Rhône, but you can’t in the Languedoc, unless your wine is an IGP.

2008 Roussanne, IGP Pays d’Oc
Quite a deep colour; more tropical fruit, pineapple and also dry honey on the palate. Quite a dry palate, with firm acidity and quite different from the 2010 as it was aged on the lees in tank for three months, with lees stirring. Richer and textured. Lots of character,

2007 Viognier, IGP Pays d’Oc
Much more colour; broader palate with notes of maturity. Quite intriguing but lacks the essential peachy apricots notes that I associate with Viognier.

2009 Pézenas – 5.25€
A blend of 35% Syrah and 65% Grenache. Some lovely perfumed fruit on the nose; medium weight, with some youthful furry tannins, providing a firm backbone. Spicy fruit, with a fresh finish. Needs a few more months in bottle to show at its best.

2007 Coteaux du Languedoc
The same blend as the 2009 Pézenas, but the vineyards have been given a new status in the interim. Lighter colour. Lightly perfumed nose. Quite a rounded palate, with some smoky notes, and a touch of leather. Very gouleyant with an appealing hint of maturity. Drinking beautifully.

2007 Faugères, les Mourels – 9.50€
70% Syrah and 30% Mourvèdre. This was the very first wine of Simon’s that I ever tried, thanks to some friends bringing a bottle for supper one evening, and it has remained a firm favourite ever since. The nose is fading a little now and the palate is quite cedary and leathery. Medium weight, with smoky spicy fruit. Simon criticises Faugères in general for having too much Carignan and too much oak. Les Mourels has neither.

2009 les Mourels
Medium colour. Quite fresh peppery nose. More weight and more rounded than 2007. Some supple spicy fruit. Youthful with furry tannins. Not yet released and certainly not yet ready.

2009 Faugères Cuvée 42 – 45€
Equal parts of Grenache, Syrah and Mourvèdre, with a very low yield, and co-fermented. This is Simon pushing out the boundaries; the vineyards are biodynamic and he has not used any sulphur in the wine-making. The élevage took place in 500 litre barrels for 16 months. He has made just 2000 bottles, and very generously opened one for us, which we then enjoyed over dinner later. The alcohol level is a heady 15.1º.

Youthful oak on the nose, with the oak nicely integrated on the palate, with a youthful tannic streak. Rounded, ripe and harmonious. Masses of concentration. Needs time. Simon thought it would be drinking nicely in 2016.

And why Cuvée 42? Anyone who remembers The Hitchhiker’s Guide to the Galaxy will know instantly. 42 was the Ultimate Answer to the Ultimate Question of Life, the Universe and Everything.
Email Post

AlanM said…
Rosemary
I visited Jean Francois Coutelou at Puimisson the other day and we had a terrfic tour of the vineyards in his van (breeze block not box in the back this time) and even better tasting. Suffice to say, we are great fans of his passion for his vines, nature and the liveliness and sheer length of his wines. Thanks for the tip off.
As we have another 3 weeks in Margon I shall be heading to Faugeres soon.
5 August 2011 at 17:17