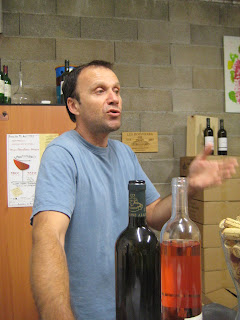 Alain Chabanon is one of the more established vignerons independents of Montpeyroux. He arrived here in 1990 and made his first wine in 1992 – just 2500 bottles. The rest of his grapes went to the coop. So he is coming up to his 20th vintage, anticipating 50,000 bottles from 17 hectares. In 2010 his yield averaged 24 hl/ha. He has not used any fertiliser of any kind for the last twelve years, and he has been registered organic for nine years and is now converting to biodynamic viticulture. Apparently 8% of the Languedoc vineyards are now registered organic. And before settling in the Languedoc, Alain studied in both Montpellier and Bordeaux and then worked in Madiran with Alain Brumont, in Corsica at Domaine Peraldi, as well at the cooperative of Sommières near Nimes.

The name is a play on words – a rose tremière is a hollyhock in French. 42% Mourvèdre and 10% Grenache which are bled after one night, and 48% Carignan which is pressed immediately. Quite a bright colour; quite a solid rounded dry nose; good acidity; very fresh palate; quite herbal and long. The acidity will round out. Alain believes in making rosés that age and this is definitely a food wine. And he is very pleased with 2010 as a vintage and 2009 was better than 2008.

2009 Le Petit Merle aux Alouettes, Pays d’Oc – 11.50€
82% Merlot, with 10% Syrah and 8% Mourvèdre, kept in vat for 12 months.
Medium colour; quite ripe plummy nose and more plumy fruit on the palate. A certain freshness and acidity as well as tannin. Youthful. Alain wants his wines to have elegance and finesse. And why Merlot? Quite simply, it was already planted, on clay soil, so not his choice, but he has gone on to do good things with it.

2009 Campredon, Montpeyroux
48% Syrah, 22% Mourvèdre, 16% Grenache and 14% Carignan. Aged in vat. I think Campredon is my absolute favourite of Alain’s wines. It has just the right balance of fruit, spice and structure. Medium young colour; ripe plummy nose, with garrigues and spice. More spice on the palate, balanced with tannins. Rounded with a fresh finish.

2006 Les Boissières, Coteaux du Languedoc – 22.50€
In theory there is 10% Syrah with the Grenache, to conform to the AC regulations for Coteaux du Languedoc. In practice the percentage of Syrah is significantly less...... And the wine spends three years in vat, with the aim of it being perfect for drinking when it is ten years old. Medium colour; dry liqueur cherries on the nose – absolutely classic Grenache. Ripe and rounded spicy cherry fruit with supple tannins. Quite ripe with a touch of alcohol 14.5º - on the finish and already drinking well for my taste buds. The vines are 30 years old, giving a low yield. Boissières describes a round field but was also his mother’s maiden name.

2006 L’Esprit de Font Caude, Montpeyroux – 24.50€
Half Syrah and half Mourvèdre, blended at the beginning of the élevage, with 24 months in wood, followed by 12 months in vat. 2006 was quite a warm vintage. Very deep colour. Quite solid and dense on the nose; some oak on the palate still quite in evidence. Solid and firm. Good substance and body. A winter wine – bring on the daube!

2007 la Merle aux Alouettes, Pays d’Oc – 23.50€
90% Merlot with 10% Carignan Again 36 months of élevage of which 24 are in wood. Deep colour; very cassis on the nose. And on the palate ripe cassis fruit with a touch of spice and some oak. Supple silky tannins. Elegant and stylish. It would be intriguing to slip this into a row of Pomerol.

2007 Trélans – Pays d’Oc – 23.90€
57% Vermentino and 43% Chenin Blanc. Alain bought the vineyard of Chenin and planted the Vermentino himself. 12 months ageing in wood, followed by 18 months in vat. And the 2008 was given 36 months ageing. The aim is a white wine that will last. Yields are tiny – 10-12 hl/ha for the Chenin and about 20 hl/ha for the Vermentino. Dry honey with a fresh pithiness on both nose and palate. Some firm acidity. Beautifully balanced concentration, with dry honey on the finish. Very intriguing. Apparently some thirty years ago the coop of nearby St Saturnin was looking into other grape varieties and considering new wines, and an agricultural consultant from Anjou suggested Chenin blanc. So the vines have some age.

In short a great range of wines confirming Alain's place as one of the leading wine growers of Montpeyroux. His cellar is just outside the village of Lagamas. 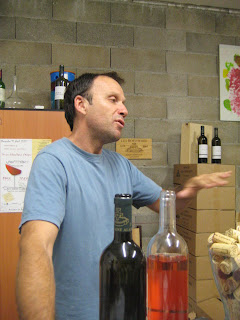 tomfiorina said…
Another interesting piece, Rosemary, about a Languedoc winemaker who I met briefly several years ago and have since wanted to visit for a more serious look at his work. I start my 3-month stage vinification at Domaine Leon Baral next week. Please contact me at tomfiorina(AT)thevineroute.com to let me know how I can get in touch with you during my time in Faugères. Regards, Tom
25 August 2011 at 09:02