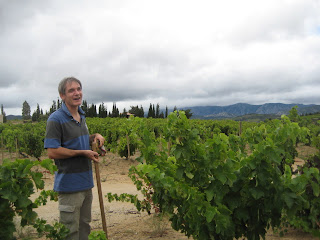 Philippe Modat is a Catalan who has returned to his roots. His grandfather had vines and Philippe’s legal studies in Bordeaux triggered his own interest in wine. Several years on, he now works two thirds of the month in Paris, and the rest of the month in the village of Cassagnes in the heart of Roussillon. He bought land and vines in 2007, in partnership with his father, from a coop member in Cassagnes and the following year built a streamlined cellar, with stone walls and solar panels, outside the village, surrounded by eight hectares of vines. Altogether they have 23 hectares but the rest are still with the coop, but will gradually be withdrawn as they develop a market for their wines. Philippe is converting the vineyards to biodynamic viticulture, observing that his neighbours use weed killer, so that there is no life in their vineyards – you might just as well be on the moon. His in contrast look radiantly healthy.

He has a small tasting area in a gallery above his cellar, so that we looked down on stainless steel tanks and concrete tanks. First came:

2010 Côtes du Roussillon Blanc >– De-ci-de-là - 12.00€
A blend of Carignan blanc, Macabeo, Grenache Gris and Grenache blanc in other words a bit of this and a bit of that. There were small plots of white vines mixed up in the vineyards of red grapes. The Carignan Blanc always gives wonderful acidity, even when very ripe. The nose is reminiscent of fennel, and typical of that part of Roussillon, known for obvious reasons as the Fenouillèdes. Sadly the appropriately named Vin de Pays des Fenouillèdes no longer exists and has been incorporated into Côtes Catalanes. And with the acidity of the Carignan, there is gras, weight and more fennel on the palate, as well as ripe fruit. It was fermented in stainless steel, with no malo-lactic fermentation and spent five months in oak. The oak is beautifully integrated, giving body rather than obviously vanilla and oak notes to the wine.

2009 Côtes du Roussillon Rosé St. Martin - 9.00€
Named after a nearby 13th century Romanesque chapel. Philippe explained that this was his third rosé, that each year he has done something different. He is aiming for quite a powerful rosé, a food wine. This was quite a deep orange pink and a blend of Grenache, Cinsaut and Syrah that were macerated for twelve hours and then pressed. For his first vintage he macerated the juice on the skins for 18 hours, which made more of a light red wine than a rosé, and the second year the maceration time was just four hours which was much too light. This wine was ripe and rounded, dry and mouth filling, with good acidity. There were hints of strawberry and a touch of spice on the finish – and certainly no bonbons anglais here.

2009 Côtes du Roussillon Villages Caramany, Comme Avant – 12.00€
The three classic grape varieties of Roussillon – 30% each of Carignan and Grenache and 40% Syrah. Handpicked and destalked. The grapes are checked on a vibrating sorting table, and go into stainless steel vats, and chilled for a two or three day pre-fermentation maceration in order to extract fruit. Philippe wants powerful flavours, but a lighter texture and not over-extracted wines, a balance that is not always easy to achieve. He favours pigeage. And this was beautiful rounded with some berry fruit, and a leathery notes, and some spice especially on the finish. It is not yet ready. A finely crafted wine which should evolve beautifully.

2008 Côtes du Roussillon Villages Caramany, Comme AvantMedium weight. Spicy leathery notes, more extraction and more pigeage. In comparison the 2009 is more mineral. This is rounded with some leathery tannins, and lots of nuances and depth. The blend was different too, with 50% Carignan – Philippe’s oldest vines are Carignan planted in 1905 – with 30% Grenache and 20% Syrah. Philippe is very enthusiastic about Carignan, when it is ripe and the yields are low. All the 2008 was kept in stainless steel, whereas 20% of the 2009 spent time in second fill barrels.

2008 Côtes du Roussillon Villages, Caramany, Sans Plus Attendre – 14.50€
Syrah is the dominant variety, and this is intended as a wine for ageing, but as Philippe observed, you don’t really need to wait. 70% Syrah and 15% each of Carignan and Grenache. Half aged in vat and half in wood. Youthful fresh pepper on the nose, with some exotic spice on the palate. Quite a sturdy plate, rounded and youthful. I think it would benefit from some bottle age.

2008 Côtes du Roussillon Villages, Caramany, Le Plus Joli – 38€
Philippe blind tasted all his barrels, looking for the most elegant, to chose the best for a cuvée of just 1500 bottles. Initially he chose six barrels, but just three worked best together, two of Syrah and one Carignan, from vines planted in 1905 and 1930. Medium colour. Elegant nose and palate. Very stylish, elegant red fruit. Spicy. Some acidity as well as tannins. Sixteen months ageing in barrel.

And the 2009 vintage will come from two barrels of Syrah, one of Carignan and one of Grenache. And 2010 has not yet been decided.

And afterwards we went and had a look at the underground barrel cellar and tasted some 2010 Carignan from barrel, with some elegant berry fruit and nicely balanced tannins and elegant finish.. Philippe was very enthusiastic, that is what you can do with Carignan. He favours Saury and Seguin Moreau as coopers – ‘it’s a question of the width of the grain; the narrower the grain, the less obvious the oak flavour’. He is also considering a barrel made from oak, but with acacia ends.

So in conclusion some beautifully crafted wines. I sense this new estate will go far. 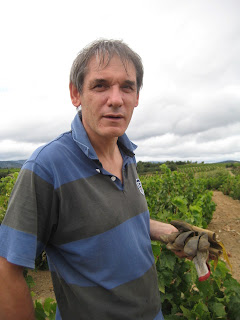 khoya20 said…
Do you know of anyway to get these wines in the United States?

great post, great vineyard! we were lucky enough to discover their rose at a restaurant and went to visit the vineyard because we loved it so much! We had a wonderful tasting and tour!
7 October 2012 at 20:42