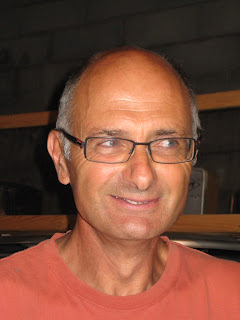 I first visited Bernard Bellahsen when I was researching The Wines of the South of France, when he was a lone pioneer of organic and bio-dynamic viticulture in the Languedoc. He was the first vigneron that I ever encountered who tilled his vineyards with a horse. Her name was Cassiopé. He now has a handsome Ardennais horse called Prince. We met again at the Natural Wine Fair in London earlier this year and I followed up that encounter with a cellar visit. Bernard is very much his own man; he is dismissive and highly critical of the various organisations that control organic viticulture, such as Demeter and Ecocert, and these days he does not have much time for the Comité des Vins du Languedoc, preferring to label his wine simply Vin de France. 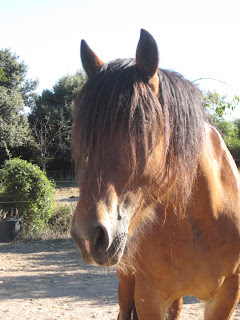 His vineyards, 4.50 hectares, in one plot are well placed between the villages of Neffiès and Fontès on the slopes of an old volcano. There is some basalt and some limestone rock, with barely 10-20 centimetres of actual earth. The vineyards are north facing, at an altitude of 150 metres, with woods behind, and surrounded by garrigues, so no neighbours, and therefore no pollution from neighbouring sprays. Bernard, and his dog Vasco, gave us a friendly welcome. And we adjourned to the cellar for some tasting. Bernard had classical music playing; he has always played music in his cellar. It was lovely, but slightly distracting, as I kept trying, unsuccessfully, to recognise operatic extracts from a medley intriguingly his cellar is insulated with cork on the outside walls, which maintains the temperature at around 20˚C.

Bernard comes from Tunisia, his mother was Italian and he arrived in Perpignan in 1961 and studied history at Montpellier, but he realised that he wanted to work out of door, and spent fifteen years producing organic grape juice. Then it was time to buy another vineyard and make the transition from grape juice to wine. He is self-taught, and initially had doubts about making wine until he realised that grape juice is far more difficult than wine, as you must not let it ferment. His first vintage at Fontedicto was in 1994 and he gave up grape juice in 1998.

His winemaking is very thoughtful; everything is done slowly and must take its time. 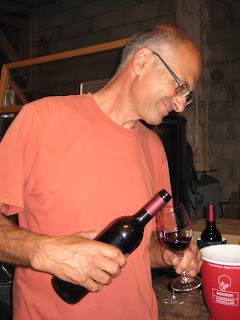 First we tasted 2008 Coulisses, 18.00€
a blend of about 50% Carignan with equal parts of Syrah and Grenache, and just a touch of Aramon. Deep young colour; dense young berry fruit, and on the palate it is ripe and dense with acidity and some quite firm tannins, and youthful concentration. The different varieties are fermented together- the fact that they ripen at different times is not important - and the wine is aged in vat and this 2008 was bottled in June. There is a lot of fruit and concentration, but with length and finesse on the finish. He never uses any sulphur and protects his wine with carbon dioxide. Coulisse is not made every year – it is all depends on the Carignan. Coulisse has more Carignan, which gives the wine generosité and structure.

2006 Promise – 20.00€ - This has more Carignan than Coulisses, with some Grenache, Syrah and a touch of Aramon. 2006 was a warmer vintage than 2008. Good colour; very perfumed, very fresh, elegant and rich, and yet with an underlying freshness. Lovely ripe fruit, hints of raspberry and strawberry. Rounded and satisfying.

2005 Promise, Coteaux du Languedoc – his last wine to have an appellation label. The same blend, with a deep colour, and rich leathery, viandé notes on the palate. Quite rounded, and just beginning to evolve, with some hints of maturity. Elegant. Length and freshness, despite the power. For me, this was undoubtedly a vino da meditazione, as the Italians so eloquently say.

Bernard enthused about the satisfaction of working with a horse. For him it is essential if you are going to practice true organic agriculture. The respect for the soil comes with working with an animal. There is a natural rhythm, the balance between l’homme, l'animal, le vegetal et le mineral. He is completely anti-machines, and very happy that more young people are beginning to work with horses.

He also has fifty ares of Terret for white wine, which he had picked and pressed the day before our visit. Half a hectare has produced just 80 litres of juice; last year he made 105 bottles, and there was none left to taste. He has finished the 2011 harvest and is generally pleased with the quality.

And as we finished our tasting his wife Cecile arrived. She had been delivering bread, and then we discovered that Bernard also has six hectares of wheat, as well as some olive trees, and that he has built a bread oven adjacent to the cellar. I shall be looking out for his stall in the Marché Bio in Pézenas on Saturday morning. 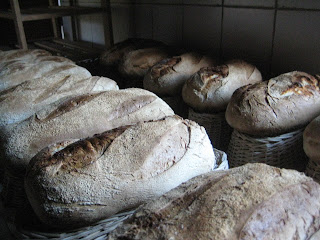