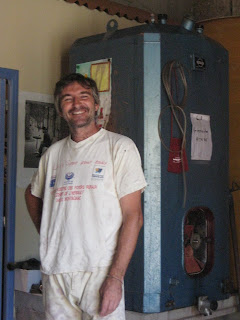 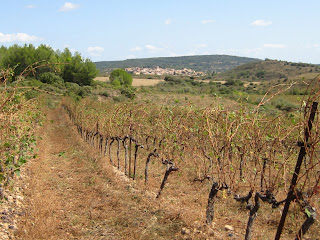 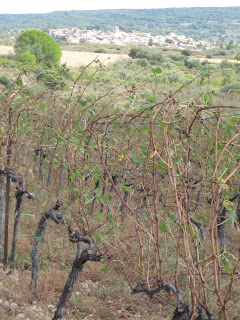 It can take something dramatic to prompt a grape grower to start making their own wine. For Eric Morot it was the devastating hail storm that took place just one week before the harvest in 2008. I was at our house in the Languedoc and I remember it well; friends had come for supper and we were comfortably settled around the dining table, glass in hand, when suddenly the sky darkened; the rain began to fall and quickly turned to hail, making the most horrendous nose as golf balls hit the paving stones of our terrace. And the next morning we saw the damage to the nearby vines. Where the previous day there had been a full canopy of leaves and almost ripe grapes, the vineyards looked as though a herd of goats had rampaged through them; there were leaves and twigs on the ground and shredded leaves and split grapes on the vines. I had never seen hail damaged vines before, and it was shocking. 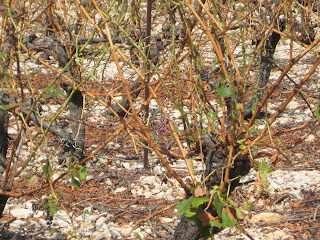 Eric has vines six hectares of vines in five plots around Vailhan and Neffiès, the worst affected villages. When he saw the devastation in his vineyards – the crop of 95% of them was totally destroyed, he was physically sick, but that very same evening, his courageous spirit took over. He decided that the next year he would make his own wine – and he did. He withdrew his vineyards from the cooperative. And 2009 saw his first cuvée – I have written about this wine in an earlier blog, but recently I went to visit Eric in his cellar and taste his 2010s. 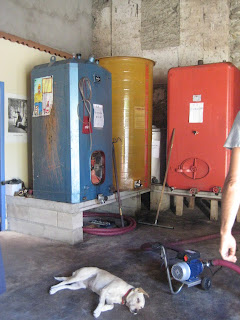 He has a small cellar attached to his house just off the main street in Roujan. It is all very simple, some red steel vats and a press. There are no oak barrels, yet, but he is planning a pure Syrah, which he would like to age in oak. It was a friendly visit; we chatted and tasted and there was music playing in the background. Eric explained how he went back to studying at the age of 38 and did a BEP in agriculture and bought his first vines in 2006. He worked at the Abeilhan cooperative to get some experience, and with some other small wine growers, and then set up a partnership with his friend, Pierre. Nor would he be able to do all this without the support of his wife, Babette.

2010 L ‘Ampiéric is a blend of Syrah and Mourvèdre. Mainly carbonic maceration with an élevage in vat. Deep colour. Quite a ripe spicy nose. Quite a soft, rounded body, as carbonic maceration can soften the tannins. Medium weight, with some peppery red fruit and a rounded finish. 6.00€ The grapes are handpicked, by friends and family – I have yet to join the gang of pickers, but I am reliably informed that they are fortified with pâté and red wine mid-morning. Next year perhaps. Eric enjoys making up names for his wine, based on family and friends, so Ampiéric, comes from his daughter Ambre, Pierre his partner, and Eric.

Next we tried L’Ambrin 2010, a blend of Syrah and Grenache, again with carbonic maceration, with fresh tannins and nice peppery fruit and a touch of cassis. Roujan does not come within the new cru of Pézenas, so the wines are simple appellation Languedoc. Again the name is a play on words and names; his daughter Ambre and his son Marin, and embruns are sea breezes. And in 2011 he has made a Grenache rosé. For the moment it does not have a name. I left full of admiration for Eric’s courage and passion. He deserves so much to succeed. 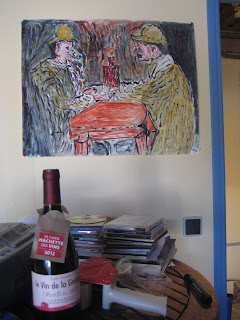