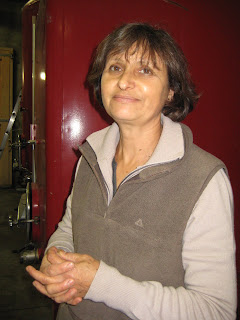 Isabelle Champart and her husband Matthieu arrived in St. Chinian in 1976, from the north of France. They slowly developed their vineyards, and until 1988 they sent their grapes to the coop. Isabelle took us for a short drive. Altogether they have fifteen hectares, in about 20 small plots, mainly on clay and limestone, some south facing vines on red clay, and they also have some sandstone, but no schist. And their grape varieties are the usual five from the Midi, namely Syrah, Grenache, Mourvèdre, Carignan and Cinsaut, and also some Cabernet Franc, for Vins de Pays d’Oc, and some experimental Morastel. And for whites they have Terret Blanc and Gris, Bourboulenc, Grenache Blanc and Gris, Roussanne, Marsanne and a little Viognier. You are now allowed a very small percentage of Viognier in white St. Chinian, unlike Faugères.

The Mourvèdre is planted on clay and limestone, as it drains well. Some Syrah is in deep soil, in cooler clay, which makes for later ripening. There is Carignan on the plateau, as well as several plots of Syrah and Grenache. We saw crumbling dry stone walls, with a handsome capitelle. Usually the vines are tilled, unless they are especially steep, and they practice integrated viticulture. The oldest vines are Carignan and Terret, both centenarian vineyards. Their cellar is near the village of Villepassans. It includes a nice barrel ageing cellar, with barriques and some demi-muids on gravel. Syrah and Grenache are aged in barriques and the demi-muids are used for Mourvèdre and also some Grenache. Any new barrels are used for Syrah or for their white wine. 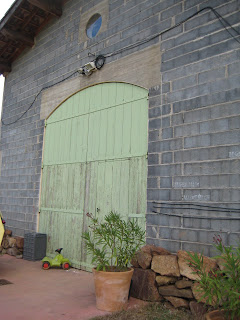 Isabelle treated us to a wonderfully comprehensive tasting. I’ve always enjoyed their wines and it had been quite a while since my last cellar visit.

2009 St. Chinian Blanc – 11.50€
Light colour; quite a rich white blossom nose, with a touch of oak. Lovely texture on the palate, with some ripe fruit and good acidity. Hints of fennel. The blend is mainly Grenache, both Gris and Blanc, and Bourboulenc, which have spent nine months in wood. And there is also some Roussanne and Marsanne.

2010 St. Chinian Blanc -11.50€
A larger proportion of Grenache, and a later harvest, and less oak maturation, although I found the nose quite oaky. It also includes 5% Viognier. Quite strong hints of fennel on the palate; ripe and rounded with good acidity. Nicely texture and youthful.

2010 Terret
An experiment with Terret, both Gris and Blanc, the oldest vines of the village, that were planted in 1900. Tasted from vat, after it had spent time in barriques, both a new Austrian barrel, and an older French barrique. A little Grenache was added to the vat. Picked late, just before the October rain. Quite herbal, with hints of fennel and almond. Intriguing and characterful. A lovely example of a grape variety that is threatening to disappear.

St. Chinian Rosé – 6.50€
55% Mourvèdre, 35% Cinsaut and some Syrah, pressed. It underwent a malo-lactic fermentation, which is rare for a rosé in the Midi. Pretty colour, not too dark. Quite a rounded nose. Raspberry and strawberry fruit; quite textured rounded and ripe. Good mouth feel. Isabelle was adamant that their rosé is a not a by-product of the red wine. 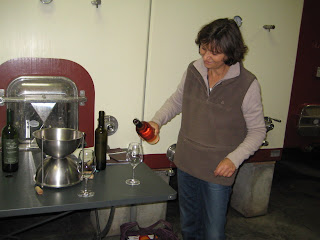 2009 Pays d’Oc - 7.50€
A blend of 70% Cabernet Franc and 30% Syrah, although the label tells you nothing, and the blend indeed varies from year to year. Vines grown on cool clay and sandstone. The vineyard is not on appellation land, so they decided to try out a non-appellation grape variety, namely Cabernet Franc. Quite a deep colour; fresh fruit on the nose, and a ripe palate, with some blackcurrant fruit, balanced by some tannin. Quite a fresh finish.

2009 St. Chinian, Côte d’Arbo – 7.70€
The name comes from the previous owner of the vineyard. A blend of Syrah, Grenache, Carignan and a little Mourvèdre, fermented and aged in vat. Grown on quite a cool site, not from their best vineyards. Young, fresh and closed initially on the nose. Some red fruit, with some spice, a touch of pepper, and a fresh finish. Medium weight and youthful.

2008 St. Chinian, Causse du Bousquet – 11.60€
A blend of 65% Syrah, 12% Grenache, 23% Mourvèdre, with an élevage part in vat, and part in barrel. This is their biggest volume wine, with 12,000 bottles. Deep colour. Quite a closed nose, some dry leathery notes. Fresh spicy fruit on the palate, with some leathery notes, firm tannins and a certain weight. Quite structured and tight knit. The oak is well integrated. A long finish. Nicely harmonious and satisfying.

Isabelle observed that 2008 and 2009 are very different vintages. 2008 was later, slower ripening and resulted in more extract. The spring was wet and the summer was not very hot. In contrast 2009 was riper, so that 2009 has more fruit and 2008 more vivacity

2008 St. Chinian, Clos de la Simonette - 18.00€
30% Grenache grown on limestone, and 70% Mourvèdre grown on clay. Aged in demi-muids of different ages, including some new ones for the Mourvèdre. Older barrels are used for the Grenache, and they begin blending in November in the year following the vintage, to produce the final blend in May, and then the wine goes into vat, making for a total of 18 months élevage. Deep colour. Quite closed, but with some attractive fruit on the nose. Quite spicy. Good balance of youthful fruit and structured tannins. Quite elegant, tight knit and long, with ageing potential

2009 Clos de la Simonette – tasted from vat.
Quite firm, quite dense, a certain freshness, with some red fruit. More accessible than 2008 as there is less acidity, so that the 2008 probably has more ageing potential.

In conclusion, a lovely tasting from one of the stars of St. Chinian. 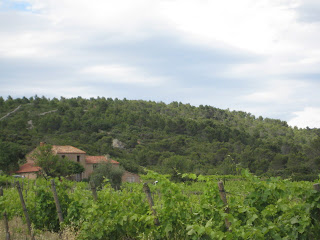