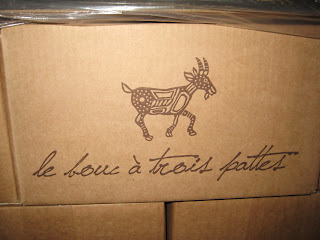 Who has ever met a three legged goat? Not unless it has had a horrible accident. The name apparently is a parody on a wine called le mouton à cinq pattes, and the official trade mark for a cheap claret sold in local supermarkets in the Languedoc. It has never come my way. Wim Wagemans obviously has a sense of humour, as well as a small wine estate in the Orb valley beyond Lamalou les Bains at Mons-la-Trivalle. He and his wife Katya come from Belgium; in 2005 they began looking for a nice place to live and grow some vines. He was a civil servant and she worked in the travel business, with Thomas Cook, and through a chapter of accidents they arrived at Mons-la-Trivalle in 2006. They sensed that the valley would be a good place for growing grapes; the nights are cooler than much of the rest of the Languedoc, but there were not that many vineyards here. And the coop in Mons la Trivalle had closed, so there were vineyards available.

And why the Languedoc? It’s more fun from a winemaking point of view. There are lots of different grape varieties, both red and white and it is the one place in France where you have a similar freedom as in the New World. Wim was looking for liberty, for an opportunity for creativity and there is no doubt that in his wines he is exploring every opportunity. Blends can vary from year to year. Sometimes he destems; sometimes he does not. Maceration times car vary; he uses cultured yeast, but tries to limit his use of sulphur to an absolute minimum. He is organic, but has not bothered with a certificate. 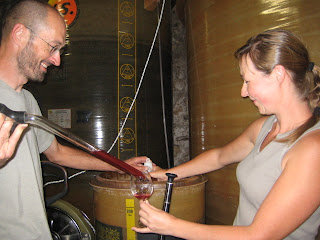 Altogether they have five hectares, in about ten plots, mostly around Mons, including a plot of 60 year Carignan just by the old barn, once a goat shed, which is now their cellar. There is also some Chardonnay, in an even cooler site at Taussac-la-Billiere in the hills above Lamalou. That is their only white. And for reds they have Carignan, Tempranillo, Grenache, Cinsaut and Syrah, in vineyards that they have either bought or rented, and in 2009 they have planted some red Muscat. The cellar is small and neat, and pretty cramped, with fibre glass vats and a row of barrels. Nor is it easy to find, unless you already know the way. Fortunately I was with my tasting buddy Lits, who had been there before. so knew the way.

Wim is pretty much self-taught; he has done some stages, with Luc Ollier at Ollier Taillefer and a couple in Burgundy, which accounts for his enthusiasm for Chardonnay; 'the Chablis style', observed Wim. The vineyard is quite high, at 305 metres, on clay and limestone; there is a lot of clay, so the soil is cold, and the vines are exposed to a cold north wind. The 2010 was sold out, and the 2011 en pleine fermentation. Tasting fermenting grape juice that is still full of sugar is not my forte so I declined that particular invitation and kept to the finished wines. But it sounded tempting. I must go back when there is some to taste. 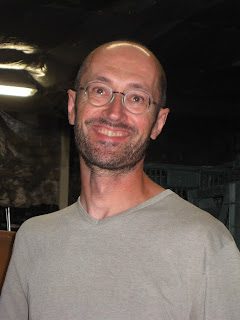 2010 Rosé – 6.50€
A pure Syrah, pressed immediately. Quite a deep colour, with a firm dry nose. Some dry raspberries on the palate, a touch of tannin and a dry finish. A food wine. It is half fermented in wood, and half in vat, and was altogether quite sturdy and serious.

2009 Sous le Tilleul – 6.50
60% Carignan, 30% Syrah and intriguingly, 10% Chardonnay. Medium young colour. Some fresh dry berry fruit on nose and palate, and a touch of oak. All the wine has been in oak, none new, at some stage, over about eighteen months. They begin with the Carignan, which is quite fat, and then added some Syrah, which gives some tannin. And the Chardonnay went in at the end, to give some acidity, which they had felt was lacking. The final blend is done after about 15 – 16 months élevage, and is bottled after another couple of months or so. Officially the Chardonnay should have been fermented with the red grapes …. But who knows? And would you make it again? Yes.

2009 le Carrosse, Lot No 2 – 8.50€ -
Lot No. 1 was fermented in oak and is all sold out. 65% Syrah, 15% Grenache, 15% Carignan and a little Cinsaut. Co-fermented, with the élevage all in tank. Deep young colour. Very black fruit, cherries and damsons. Some tannin balancing the ripe fruit, making for a fresh tannic edge. Quite rounded and mouth filling. I warmed to Wim when he said that he did not like wines when the oak was too obvious. The blend of le Carrosse varies but the constant factor is the Cinsaut. In the 2010 there is as much as 40%. They are 100 year old vines, and initially gave very low yields as they had not been well tended by the previous owners – now they are doing much better.

2009 Tempranillo Vieilles Vignes – that is to say 40 years old – 8.50€
None of the vin de cépages have any oak. Deep young colour. Quite rounded, with a ripe fleshy palate, with a firm streak of tannin. Quite fresh and youthful; quite gutsy with a tannic finish. The maceration lasts five to six weeks and the grapes are not destemmed.

2009 Syrah – 8.50€
Deep young colour; a dry nose with quite firm peppery fruit. Solid and rounded, with a more opulent and aromatic palate. Ripe almost sweet fruit, with a firm stony streak. The vines are young, and 2008 was the first vintage of this wine.
Next came some vat samples. 2010 Syrah was deep in colour, with some smoky tannins and quite a ripe tannic palate. I thought it could have been in oak, but no. It is part grown on schist and part on limestone, and had a sturdy mineral nose. It was all destemmed. Schist was the main contributor to the flavour.

2011 Grenache. The fermentation began about three weeks earlier on 29th August. Vivid colour but not as sweet as you might have expected, as the fermentation was nearly finished. Some lovely ripe, juicy fruit, redolent of cherries. This was destemmed and he has added 10% Syrah. I was in a Châteauneuf mood, Wim laughingly observed.


Pink Muscat 2011 – just finished its fermentation. Quite a vivid pink. A perfumed nose, with a pithy edge. Pithy and grapey and very Muscat. Wim said that he was inspired to plant it after a trip of Australia in 2004, when he had enjoyed liqueur Muscats. This is obviously quite different, but very original. And when will he bottle it? He didn’t know. When it’s done its malo. I shall look forward to tasting the finished version in due course. 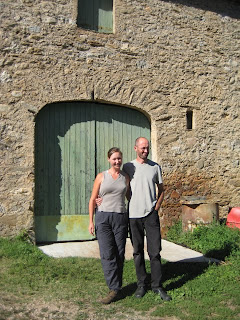