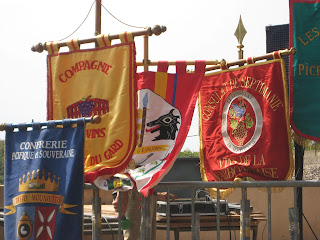 The Faugères fête is a regular event in the calendar – fixed for the second Sunday in July, which this year also happened to coincide with Bastille Day.  I have learnt from experience that the best time to arrive is first thing, 10 a.m. on the dot, before temperatures have risen and the streets have filled up.   It does seem to be the same core of wine producers who represent their appellation each year– but it is fun to catch up with some familiar faces.   These were the highlights.

An interesting  conversation with Brigitte Chevalier from Domaine de Cébène.  She is developing a scheme for saving old Carignan vines , a plot of 70 to 100 year old vines that would otherwise be pulled up.  You can become a godfather, a parrain, or a godmother or marrain to a Carignan vine for 55€ for three years, or for 85€ 5 years, in return for which you will receive a bottle of Belle Lurette each year, and also preferential prices for Brigitte’s other wines.  Or if you prefer Mourvèdre, that is an option too, at 95€ for three years, or 155€ for five years, and then you receive a bottle of Felgaria each year.   I thought it was a fun idea and have opted for Carignan.   For more details contact Brigitte on bchevalier@wanadoo.fr

Simon Coulshaw from Domaine des Trinités was pouring lots of wine.  I tried his nicely rounded Roussanne, and some lightly peachy Viognier and a refreshing rosé, and should have gone back to taste his reds.  But somehow that didn’t happen.  Sorry Simon.

Another estate I have earmarked for a visit is Château Haut-Lignières, with a delicious rosé and some satisfying reds.

Françoise Ollier’s wines from Domaine Ollier Taillefer are always worth a taste.  She poured me a glass of her latest vintage of les Collines, calling it Rosemary’s chouchou ….. I am not quite sure of the exact translation of that, but you probably get the idea.   Anyway it was delicious with some lovely spicy fruit and a fresh finish.   And I also enjoyed the two cuvées  of Domaine de l’Ancienne Mercerie, les Petites Mains and Couture.

I’ve driven past Mas des Capitelles, as thought I should at least stopped and taste, but was not thrilled.  Nor did Domaine du Météore excite me as much as I might have expected.  To be fair this could be temperature related.

And then the Confrérie of Faugères started coming down the street, which was my cue to follow them down to the podium that had been set up in the car park, as they wanted to make me a Chevalier of the Confrérie.  So I fell in alongside Jean Albe who is the Grand Maître of the Confrérie de Sant’Andiu de la Galiniero– which concerns the wines of Beziers.  He was dressed in full regalia, and there were other confréries – from Picpoul de Pinet, and for wines from the Gard and Narbonne, as well as olives and some biscuits and pâtés. Everyone was dressed in heavy robes and funny hats. 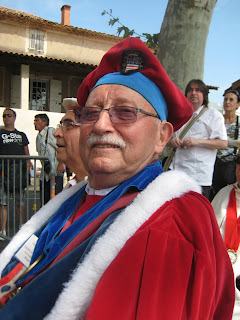 For the intronisation, I was in good company, with Jacques Gravegeal.  But first the very elegant lady mayor of Faugères made a speech, - she could have been going to a Paris cocktail party - and then it was the turn of Nathalie from Domaine de l’Ancienne Mercerie.  She is president of the appellation Faugères and she compared the constraints of an appellation with the liberty of the vins de pays.  This was relevant as Jacques Gravegeal has been much involved with the development of the Vins de Pays d’Oc and is now president of Intersud de France, an organisation which groups wines from all over Languedoc-Roussillon. 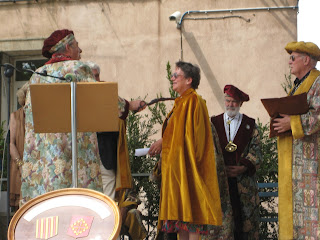 And then it was time for the ceremony; a fanfare to welcome you up on stage; you were given a heavy gold velvet robe to wear – just the thing for a warm summer’s day.   The officers of the Confrérie of Faugères were dressed in tapestry coats.  A member of the Confrérie explained why they thought you should be a member of the Confrérie, based on what you had already told them about your CV and then you had to drink some Faugères – it was the coop’s Mas Olivier.  I don’t know what they would have said if you had said you didn’t like it, as you then had to say:
J’ai gouté; J’ai aimé.
Ambassadeur, or in my case Ambassadrice, je serai.
And then you were given a gold colour tastevin which looks a bit like a scallop shell, were dubbed on both shoulders with a vine branch and presented with  a rather smart certificate, for which I now need to find some wall space.  M. Gravegeal, the consummate politician that he is, said a few words, but fortunately I was able to avoid that honour.  I told the lady mayor that it was too hot for any more speeches, and any case you could sense that most people wanted their aperitif…. 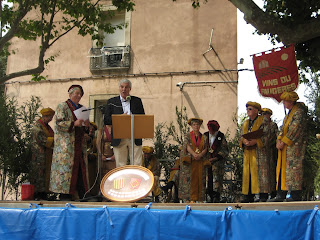 We had an appointment in Catherine Roque’s tasting caveau, Mas d'Alezon, which is conveniently situated by the church in Faugères, a cool vaulted room.  Her young stagiaire, Blanche, was pouring 2012 Montfalette, the mainly Mourvèdre cuvée, as well as 2011 Presbytère, with its peppery Syrah and also 2007 Presbytère which was rounded and leathery.   There was her white Cabretta 2011, with some lovely textured mineral fruit.  And then a friend of Catherine’s produced a simply delicious bottle of Chablis which turned out to be Laurent Pinson’s 1995 Mont de Milieu.  That was our aperitif, and then it was time for lunch. 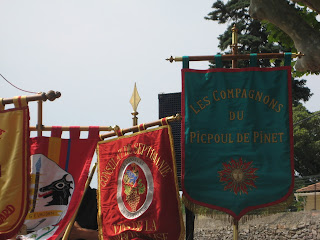 Alan March said…
Congratulations on your investiture Rosemary. As we arrive on Wednesday for the month we have missed this and the fair at St Chinian :(

Rosemary George MW said…
But you are in time for Ollier-Taillefer's open day on Sunday. And be prepared for a heatwave! A wine cellar is one place where you can stay cool.
22 July 2013 at 09:57

Alan March said…
Thanks Rosemary I may just pop along. Booked into see Jeff Coutelou on Thursday too. Very heavy weather here in Cahors region this evening
22 July 2013 at 21:49