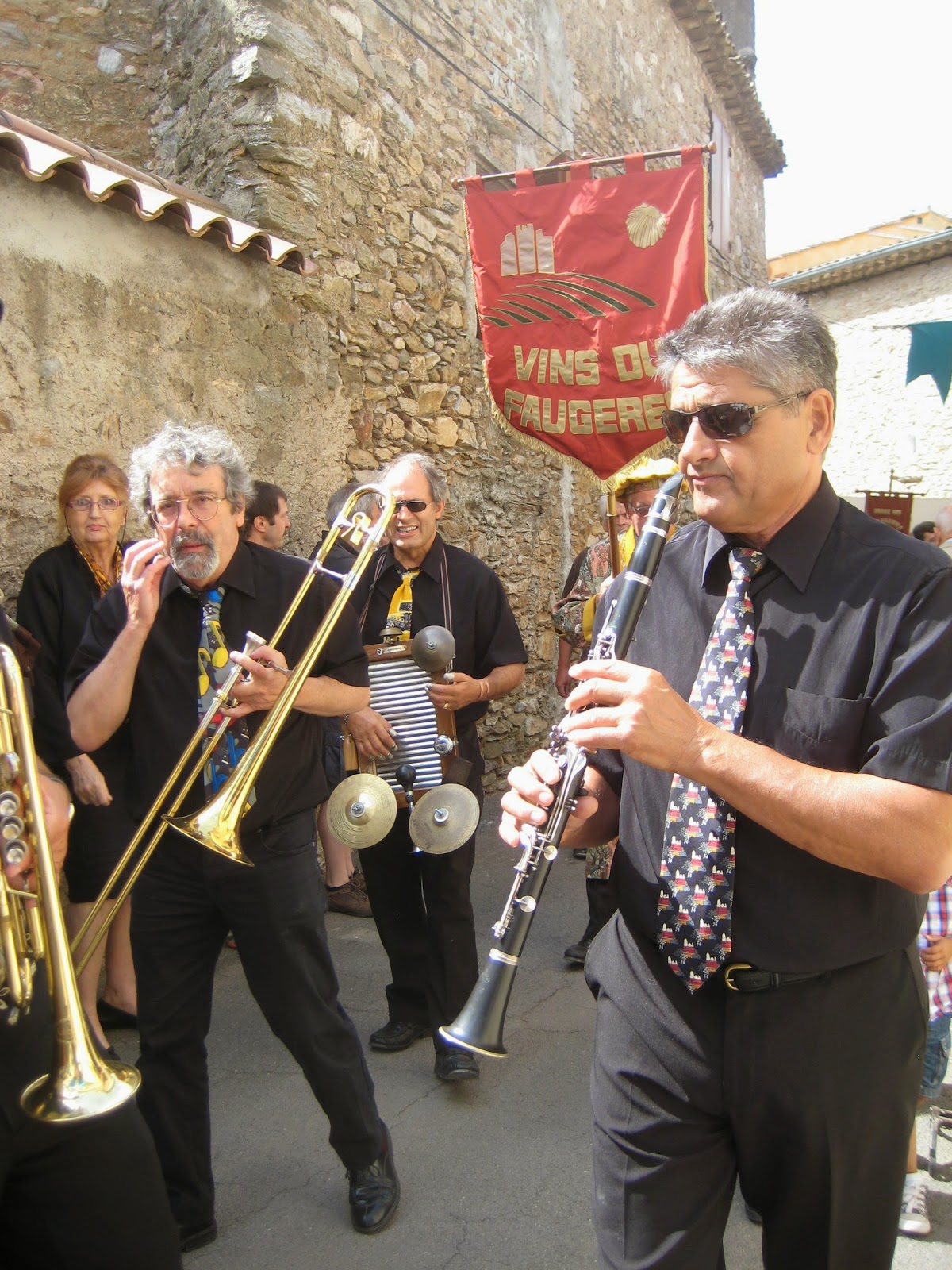 I always enjoy this village fête  It is wonderfully animated with plenty of wine to taste and vignerons to talk to.  I realise that this year I was not that assiduous about tasting.  I think I was having too much fun chatting.  The main street, la Grande Rue, is a bit like Piccadilly Circus.  If I stood in the middle of it for long enough, I felt I would meet everyone I knew in the Languedoc.   It also poses a bit of an obstacle course; there were babies in buggies and dogs on leads and groups of friends stopping for a chat or a taste.  And there was not just wine.  I was tempted by strings of pink garlic, by wholemeal loaves baked in an old fashioned bread oven, by ginger syrup.  The village historian, Claude Caumette, was there selling his books;  a local artist had some lovely water colours and sketches, and the distiller from Autignac was displaying his wares, a fragrant Marc de Muscat and a rich Esprit de Bière as well as the classic Fine de Faugères.    And the various confréries, not just that of Faugères, processed down the street. 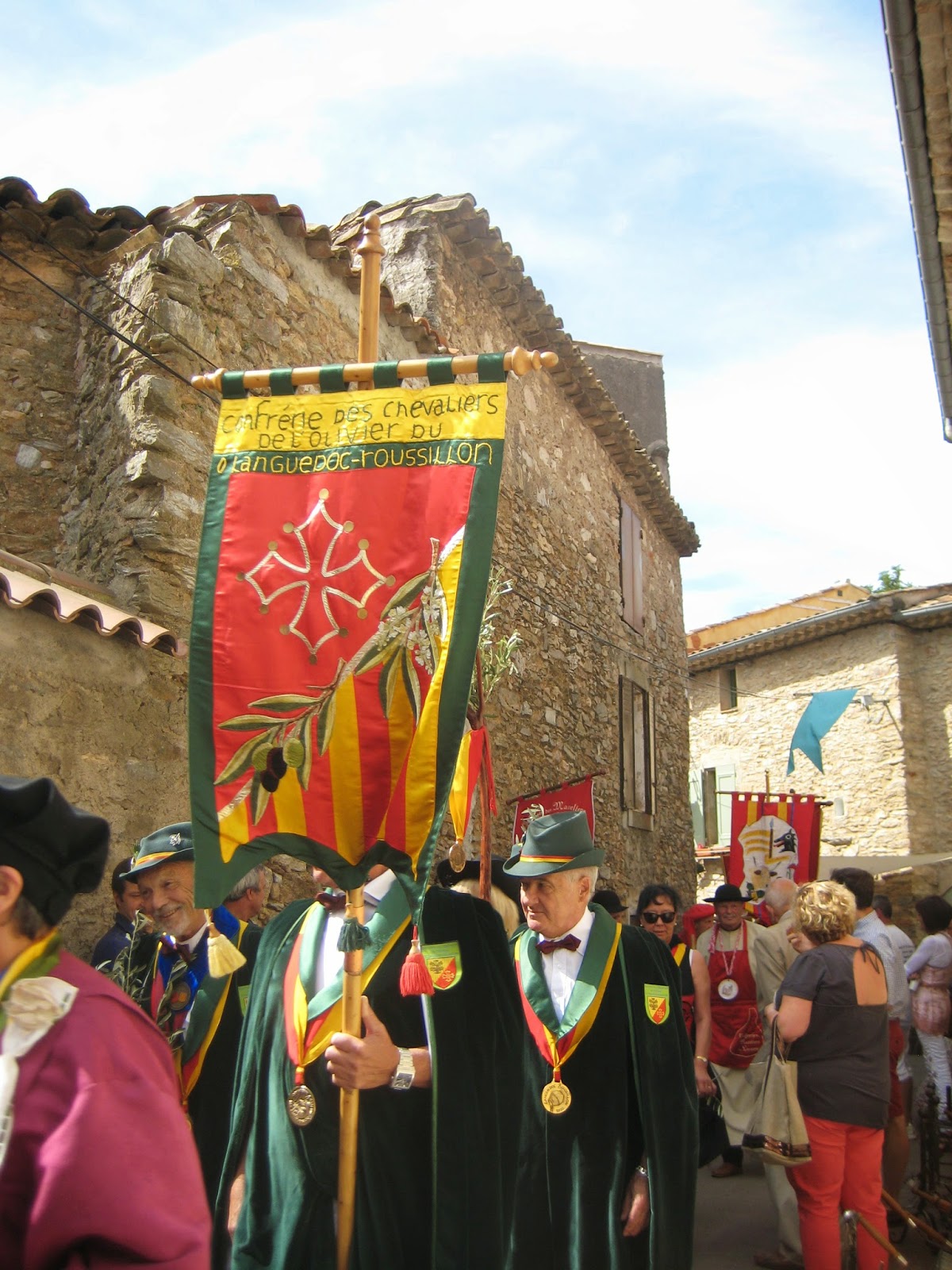 I had a quick taste of Domaine de Sarabande’s fresh dry rosé, which made a refreshing rince-bouche.  And Simon Coulshaw from Domaine des Trinites had just bottled his 2013 le Portail – he said it was infanticide to taste it, but nonetheless you could see the potential with some firm liquorice fruit and minerality.  The blend is slightly different from the previous vintage with 60% Syrah, 30% Grenache and 10% Mourvèdre, as opposed to 2012 which had 60% Syrah, but with 25% Grenache, 10% Carignan and 5% Mourvèdre. 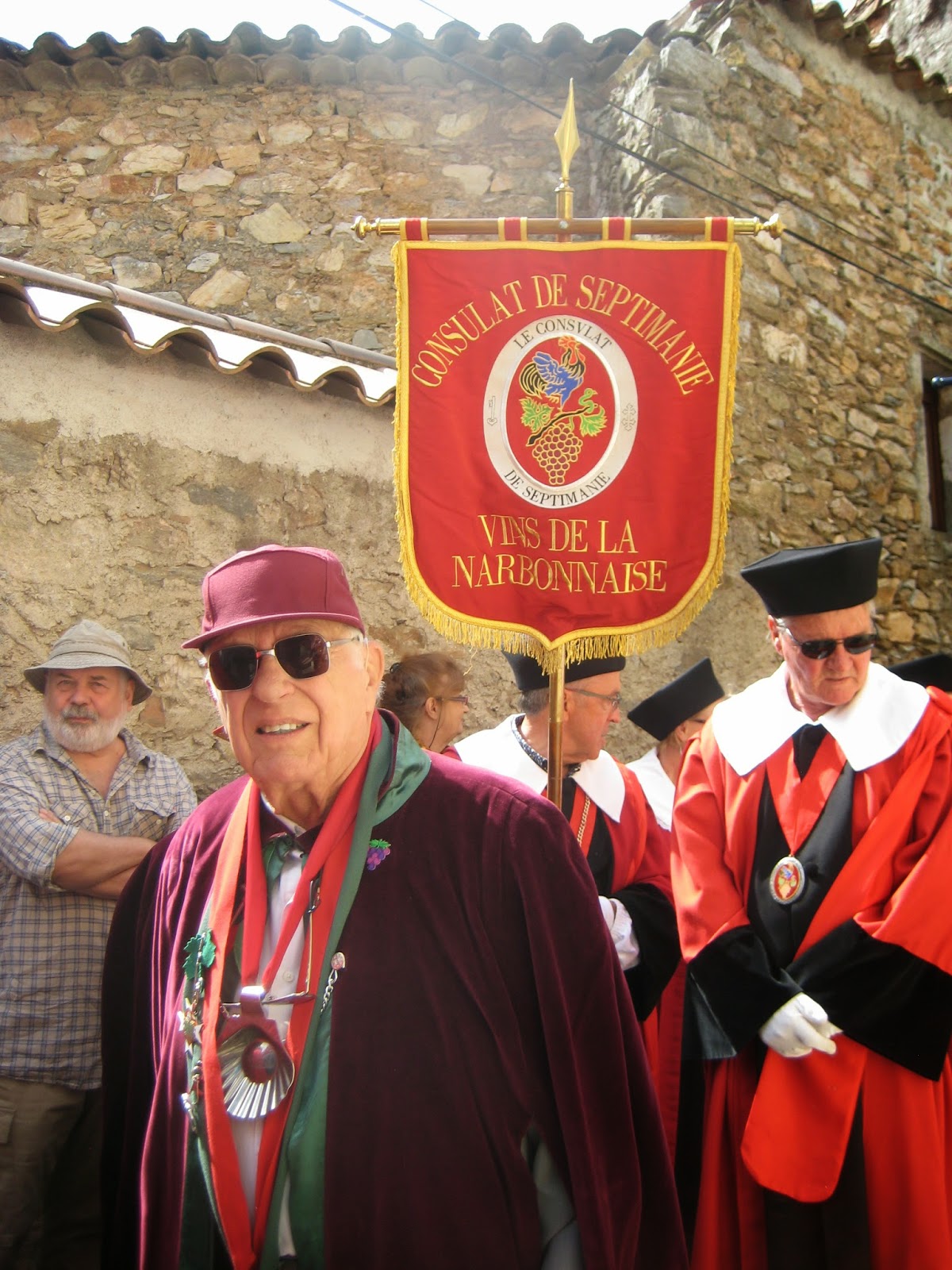 Brigitte Chevalier from Domaine de Cebene was also pouring St. Martin d’Agel’s 2013 le Pélerin, which had some appealing red fruit, with a touch of liquorice and a fresh finish.   I much preferred it to the 2012 of last year – definite progress has been made there.   And Brigitte has moved into her new cellar outside Faugères, so we made plans for me to come and admire it, even though she still has no electricity …. 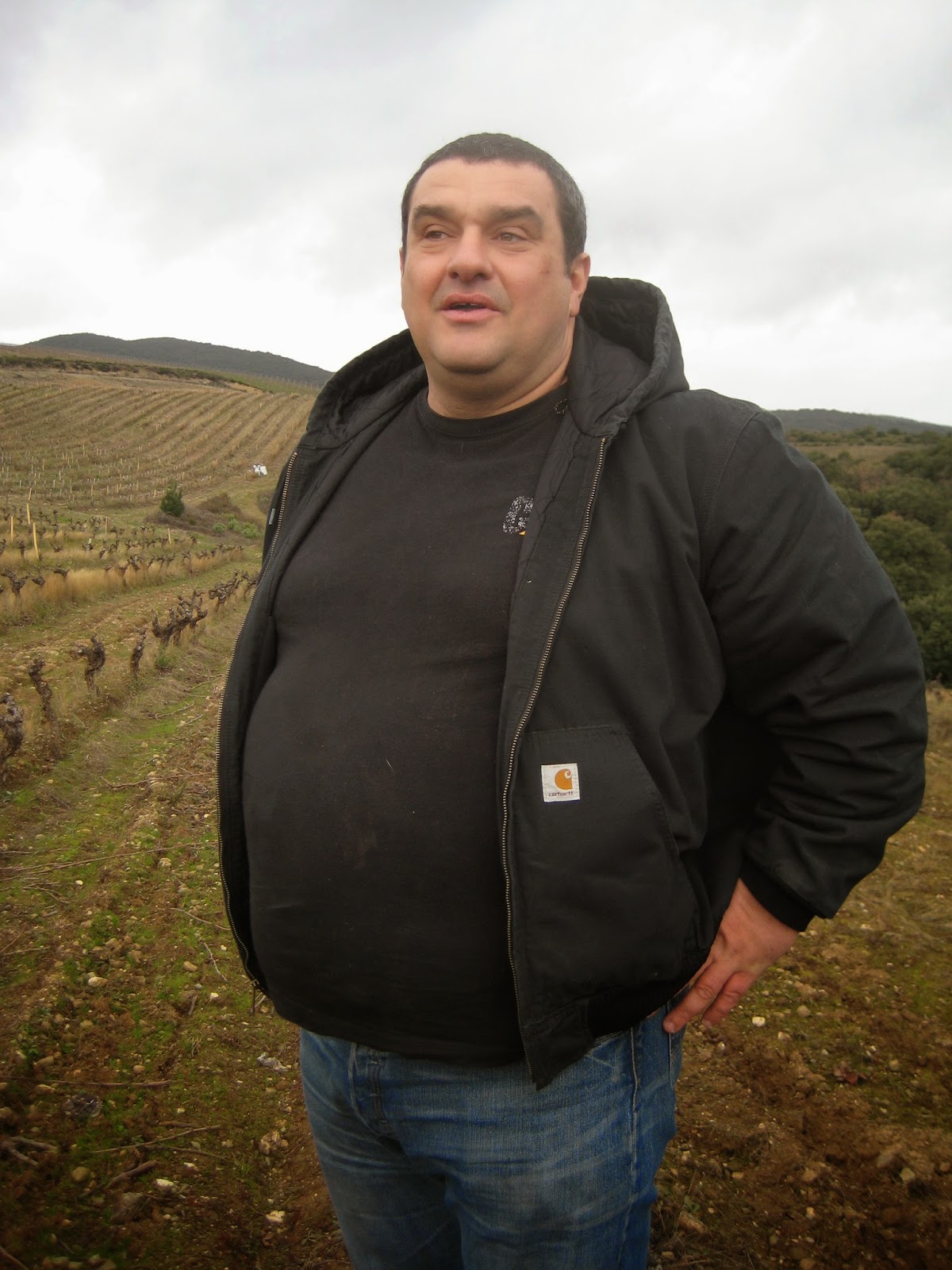 Jérôme Py of Domaine du Causse Noir was the newcomer to the occasion, pouring his first vintage, the 2011.  If wines take on the character of their maker, this is a classic example.  Jérôme is solid and stocky, and so are his wines, rich and characterful, with leathery notes.  And his 2013 rosé has an intriguing herbal note. 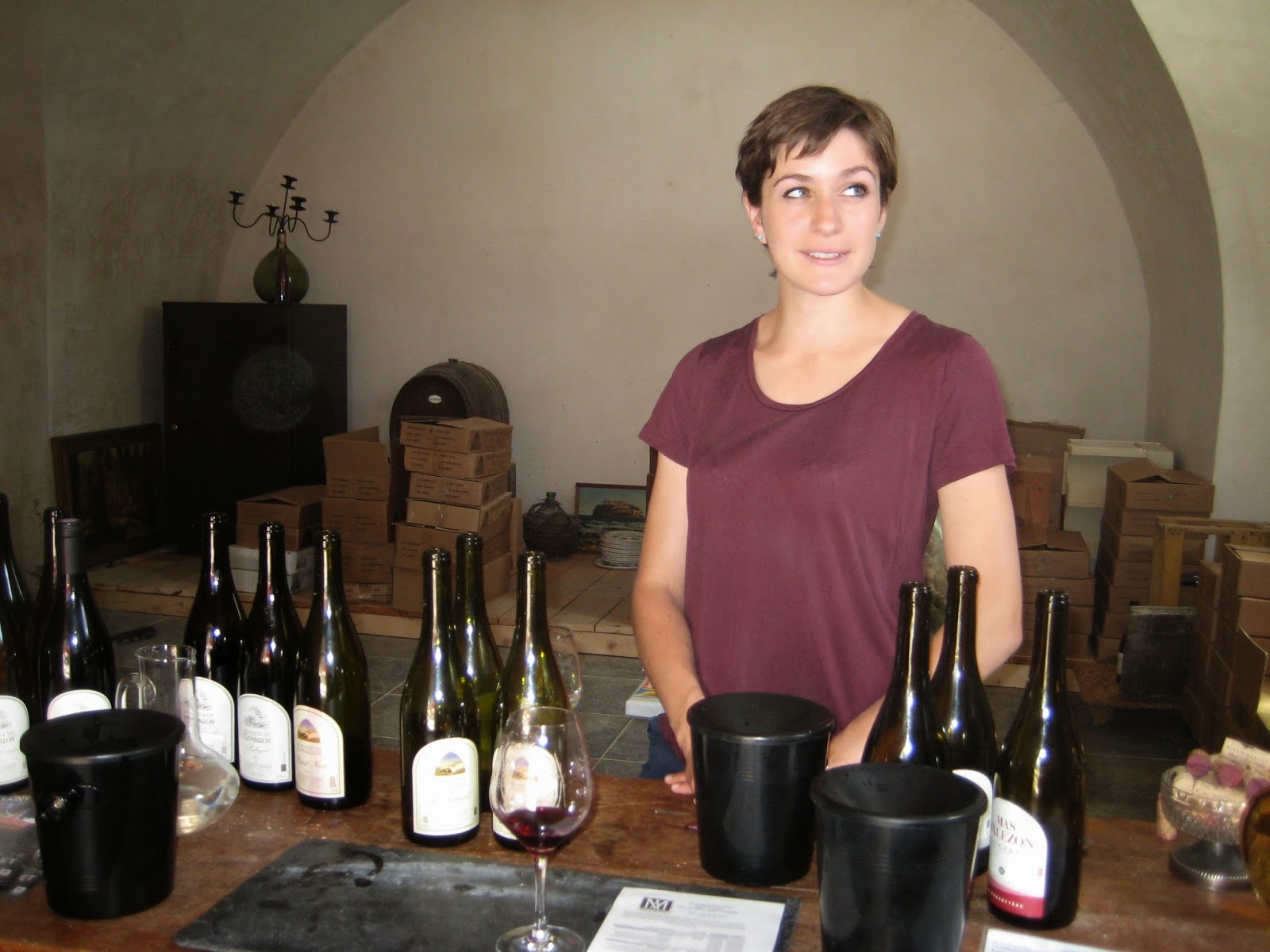 And then we adjourned to the quiet haven of Mas d’Alezon’s tasting caveau by the church, where Alix Roque was pouring Domaine de Clovallon as well as Faugères.   The 2013 Pinot Noir from Domaine de Clovallon was deliciously refreshing and fragrant with fresh raspberry fruit balanced by some backbone.  And then it was time for lunch! 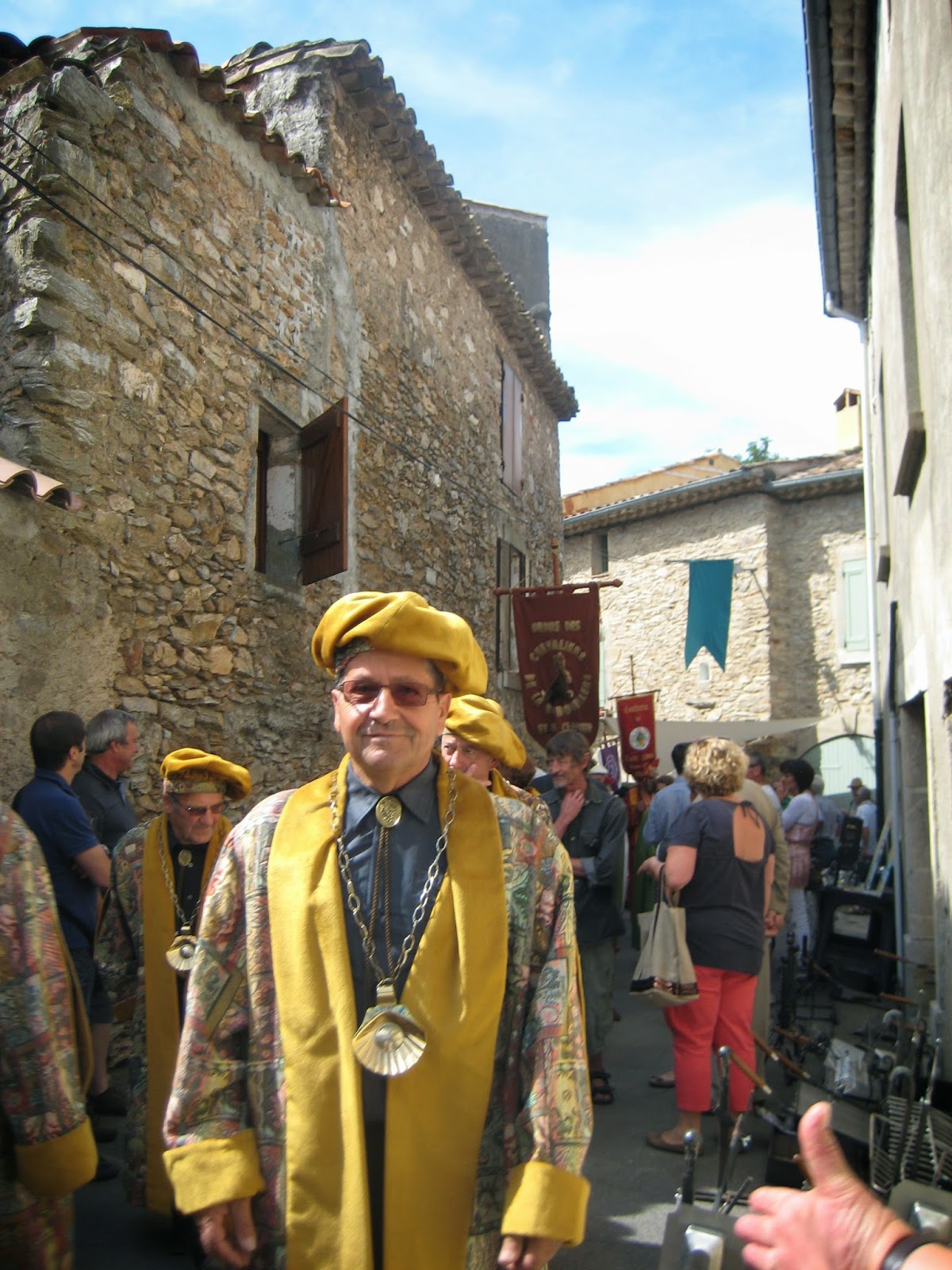