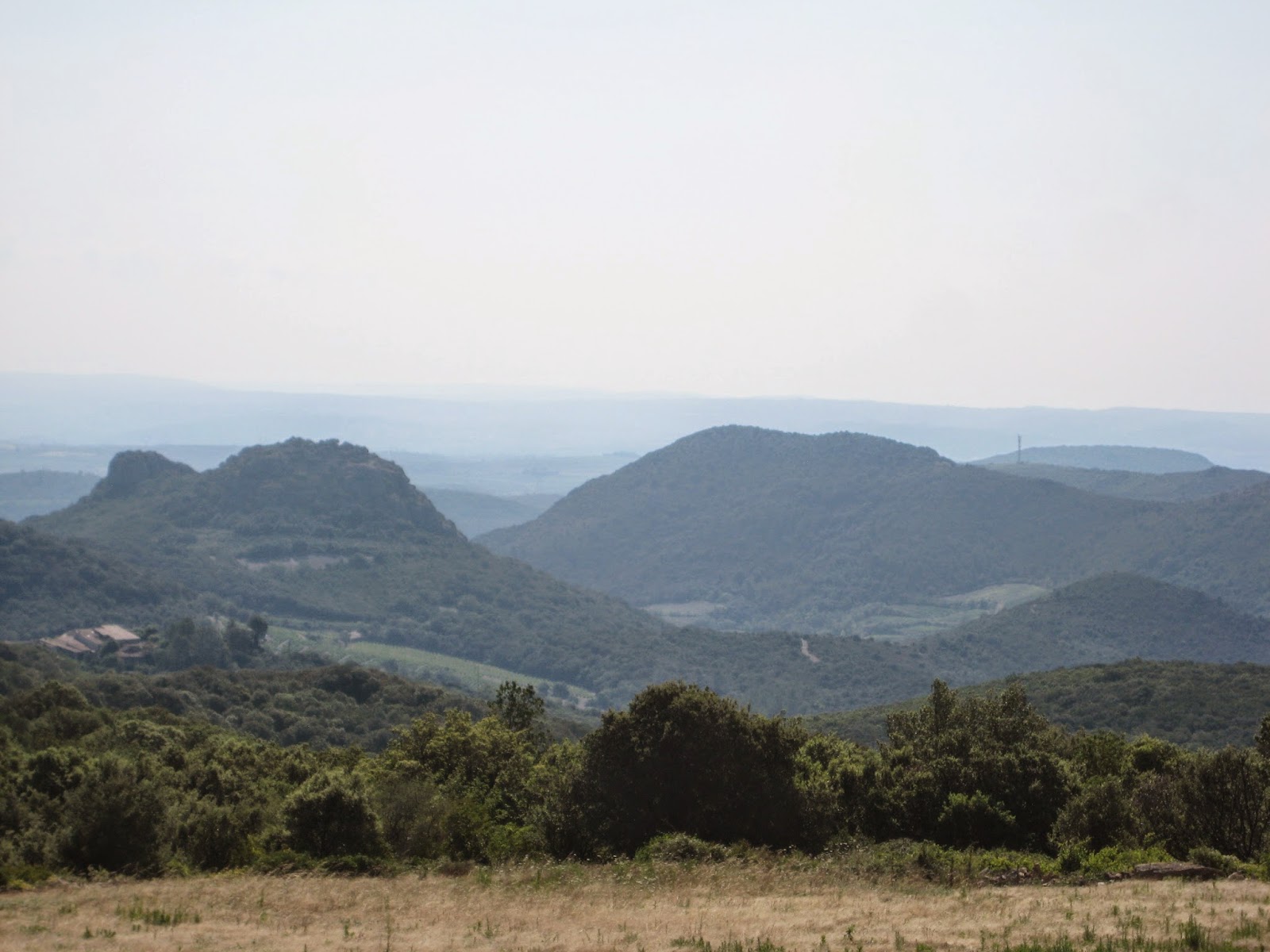 I never refuse an opportunity to visit vineyards, especially if they are as dramatic as those of Château les Deux Rocs.   You take the road for Crozes out of the village of Cabrières.   As you leave the village there is a sign warning you of bends for four kilometres and a little while afterwards an encouraging sign for Château les Deux Rocs, and then you reach the hamlet of Mas Rouch where Jean-Claude Zabalia has his cellar.   He has bought his property from Guy Mathieu who was originally involved with Domaine du Temple, the historic estate of Cabrières.  That property is now for sale. 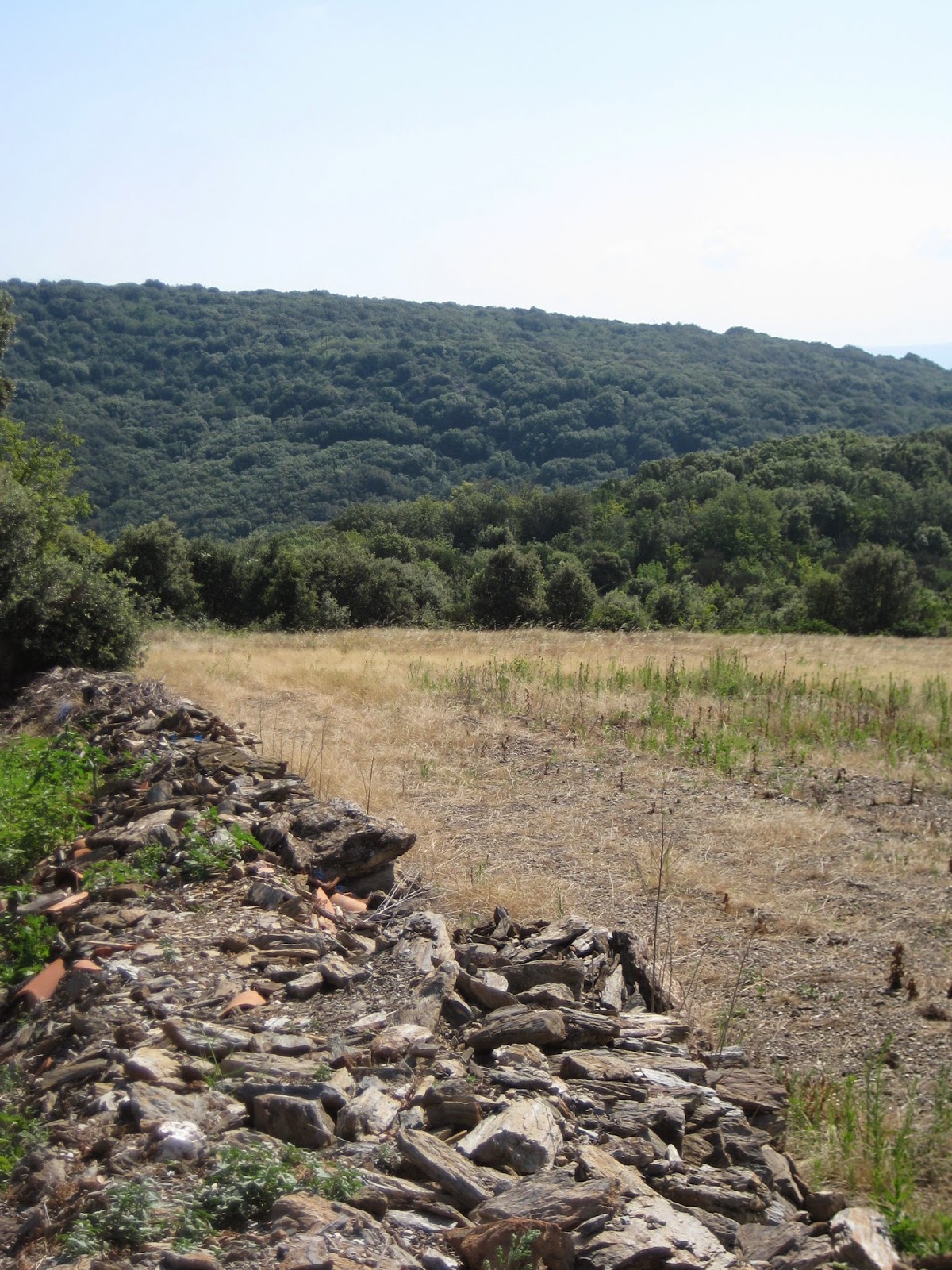 Jean Claude has vineyards in three spots.  First we headed further into the hills, through the pretty little village of Crozes with its tiny medieval church and then on up to an altitude of 400 metres.  The vegetation changes.  There are oak trees and sweet chestnuts, and also hunters and mushrooms.  Mushrooms are not so good, as they are a warning of mildew.   Here Jean-Claude has cleared land to plant Grenache blanc, Grenache Gris, Vermentino and Roussanne this coming winter, two and a half hectares altogether.   He already has some Viognier, and he is very excited at the prospect of white varieties at a high altitude.  He will of course have to be patient.   The plan is to pick all four grape varieties together, and vinify  them together, so that  they achieve a natural balance of freshness and aroma.  The vineyards are exposed south, south east.  He pulled up some old Carignan, sadly,  but Carignan really is not good at this altitude; the clones were no good and the yield too high and the grapes simply did not ripen.  The views were breathtaking.  On a clear day you would be able to see the Pyrenees, and in the foreground were the two dramatic rocky outcrops that give the estate its name. 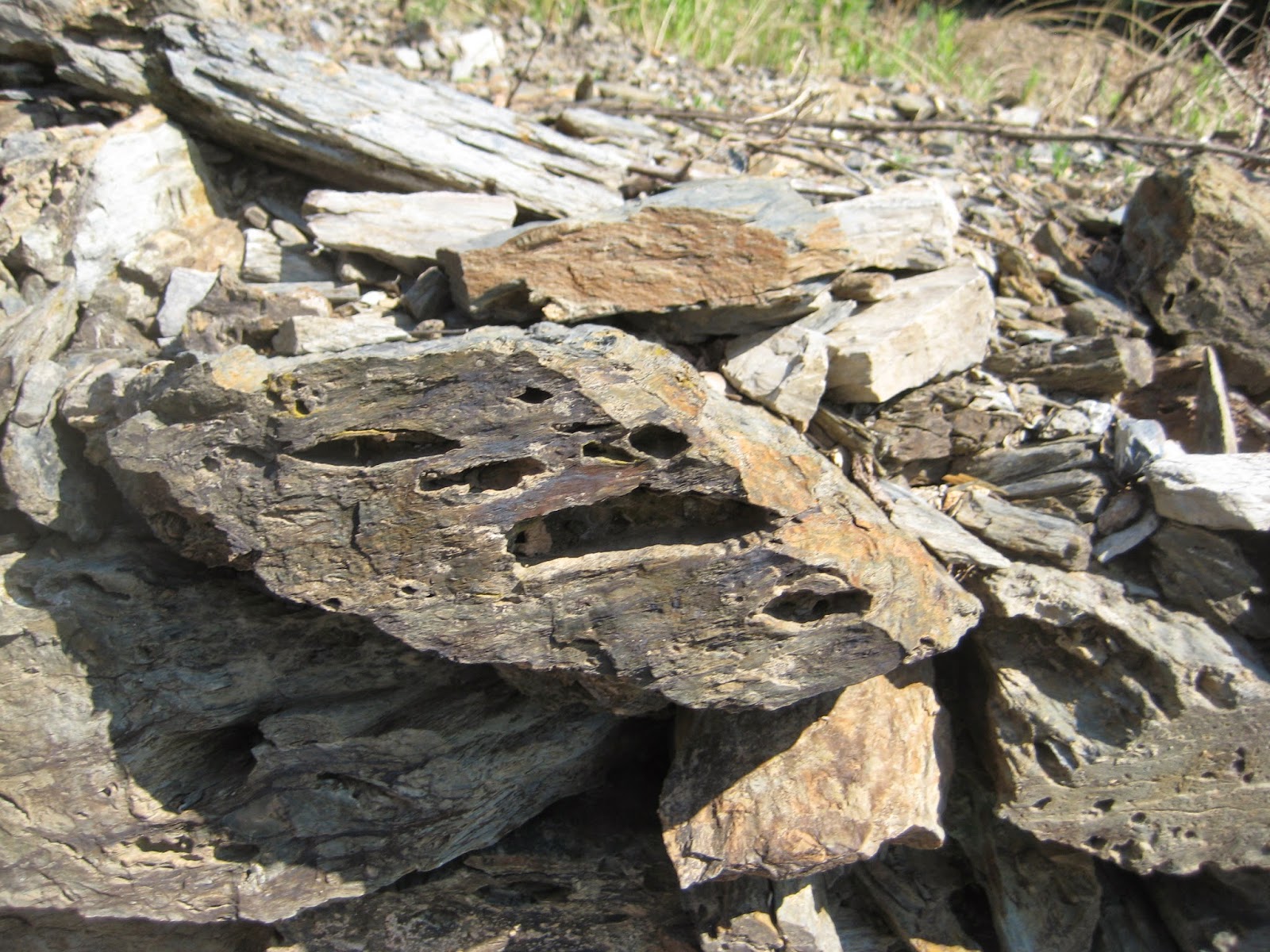 Jean-Claude explained how the schist of Cabrières is quite different to that of Faugères.   Schist is usually acid, but here it is more alkaline with an almost neutral pH.  It is not in sheets like the schist of Faugères, but looks almost like weathered wood, with holes, and indeed it has been worn by the weather and is very friable.   Apparently it is more like the schist of the Moselle or Priorato.  Its origins are to do with the Pic de Vissou.   The tannins from schist are never hard, if the grapes are ripe.  There is a lot of minerality, and a côté fumé.  The land here is dotted with old volcanoes.  Schist is something new for Jean-Claude.  2012 was the first time that he vinified grapes grown on schist.  'You have to learn about your vineyards.'.   Here there are no neighbours, so no risk of vers de la grappe, but there are wild boar and you have to protect the vineyards. 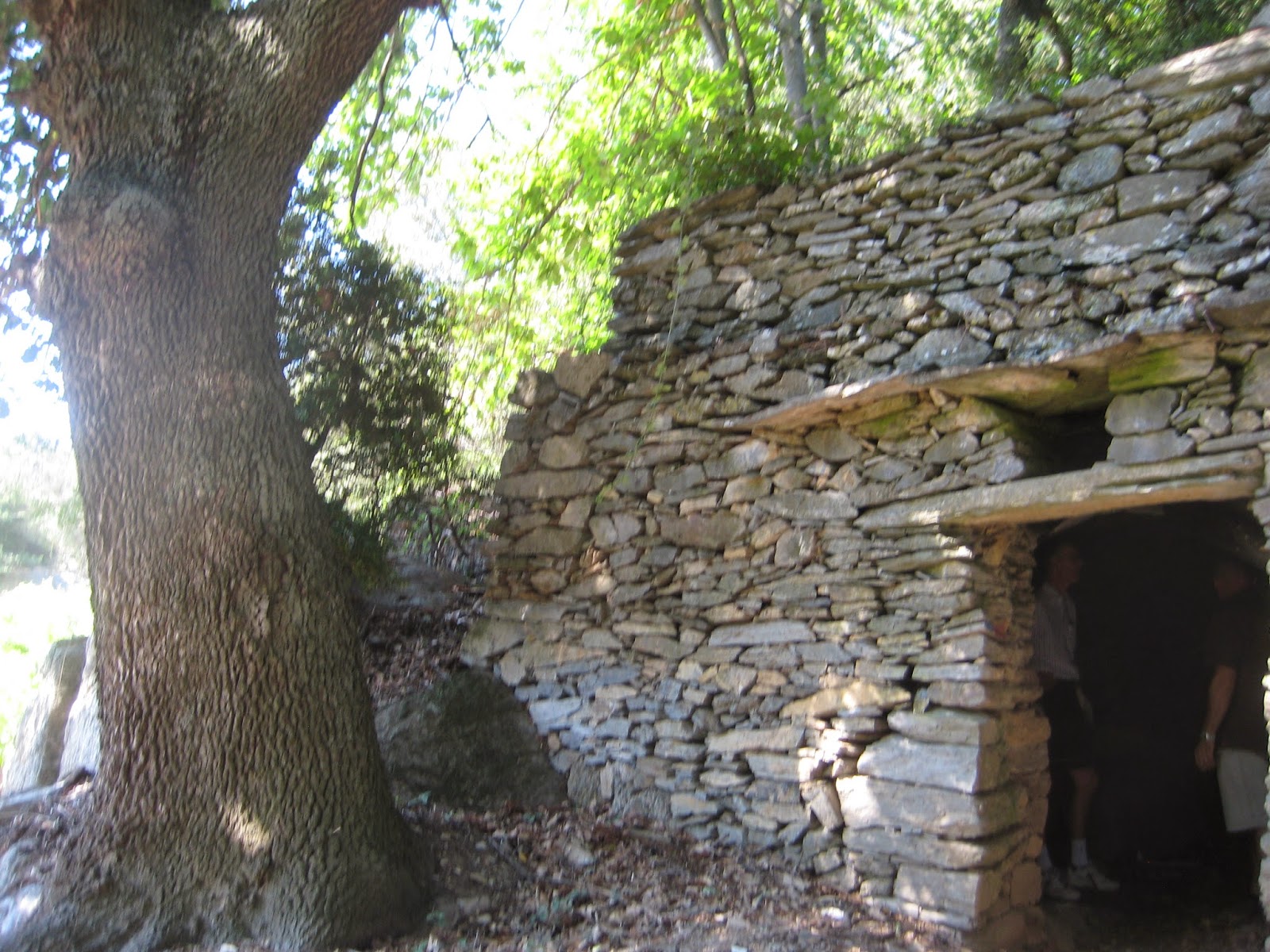 Altogether Jean-Claude has 18 hectares and he could plan another four, and in addition he has two hectares of Picpoul that he rents, and another 2.5 hectares in Aniane, with another 1 hectare to plant.    There is a lot of work to do; the previous owner was very conventional in his methods, using weed killer and chemical fertilisers.   It is all about the paysage and the terroir.  The challenge is to work the vines and to maitriser le terroir.  He wants to become organic as soon as possible, but it does take time. 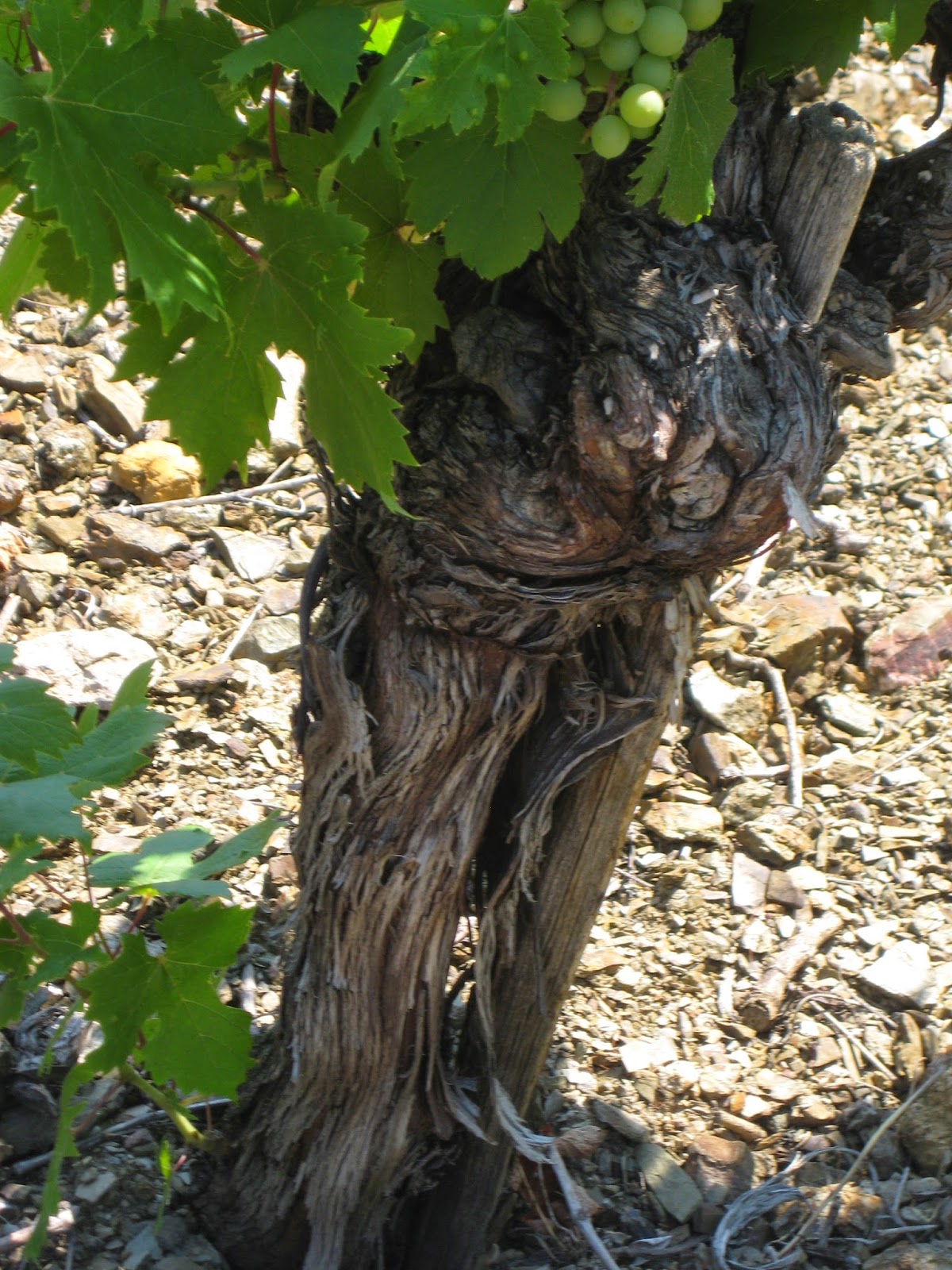 We admired a vineyard of Syrah, with a view of the Pic de Vissou; the colour of the schist changes, with some grès. And we passed an old vineyard that was a complete mixture of vines, with Carignan Noir and Carignan Blanc, Aramon, Alicante, Grenache.   Then we went to a vineyard of Syrah, with a wonderful old capitelle, and some stone terraces that have been carefully restored.  And then we drove round the vineyard below the Deux Rocs.  And Jean-Claude talked about the work they had done cleaning up the environment; there is a hedge where he wants to plant more cherry trees, and he has pruned the old olive trees. 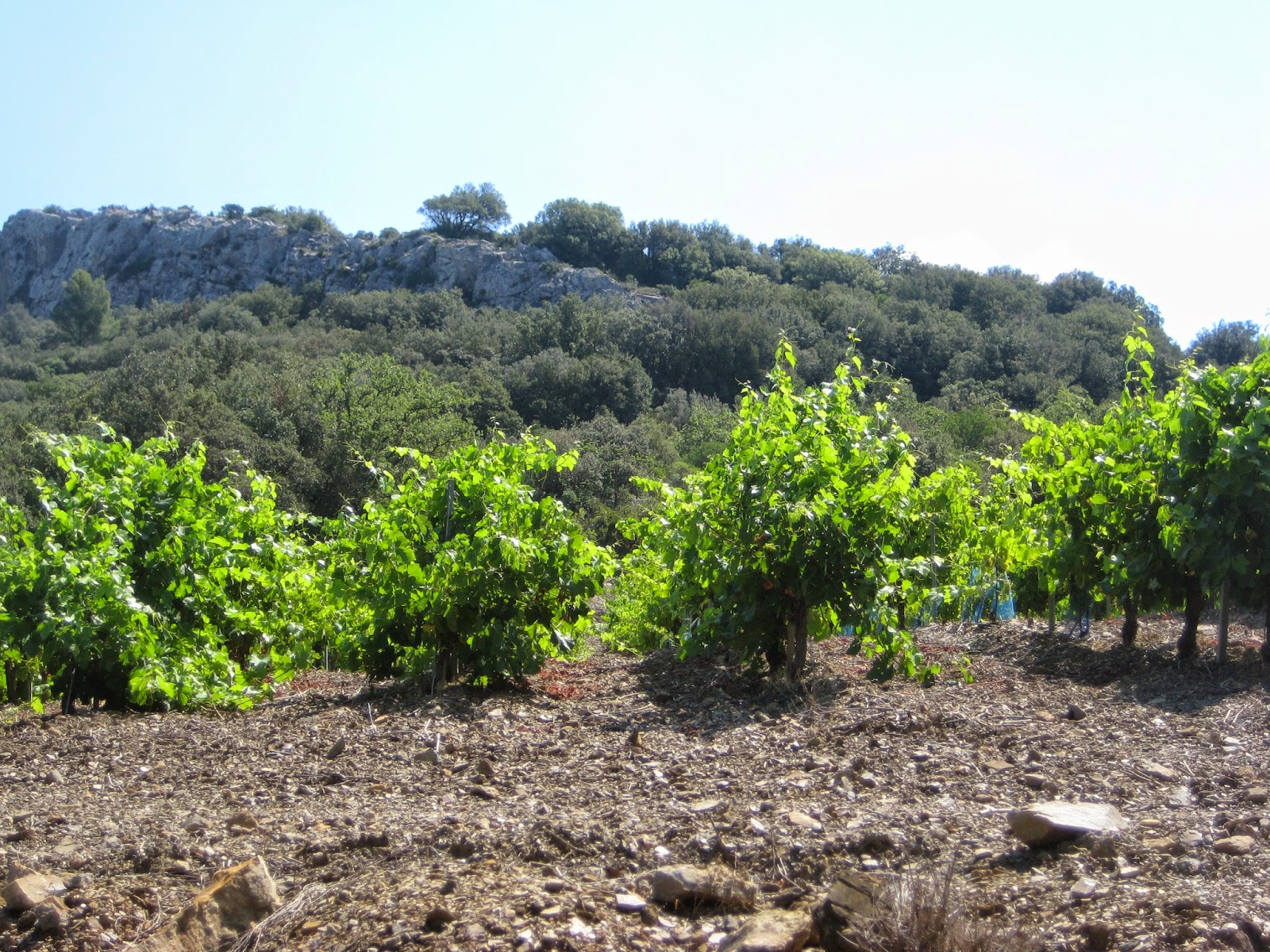 And then it was back to the cellar to taste the 2013s.  His cellar is very functional and is only ten years old.  Ideally he would have chosen concrete rather than fibre glass vats, but everything works well.    He took over the vineyards in August 2012, so made the wine, but had done nothing in the vineyards, so  a lot of selection was necessary and he sold off wine he did not want off en vrac. 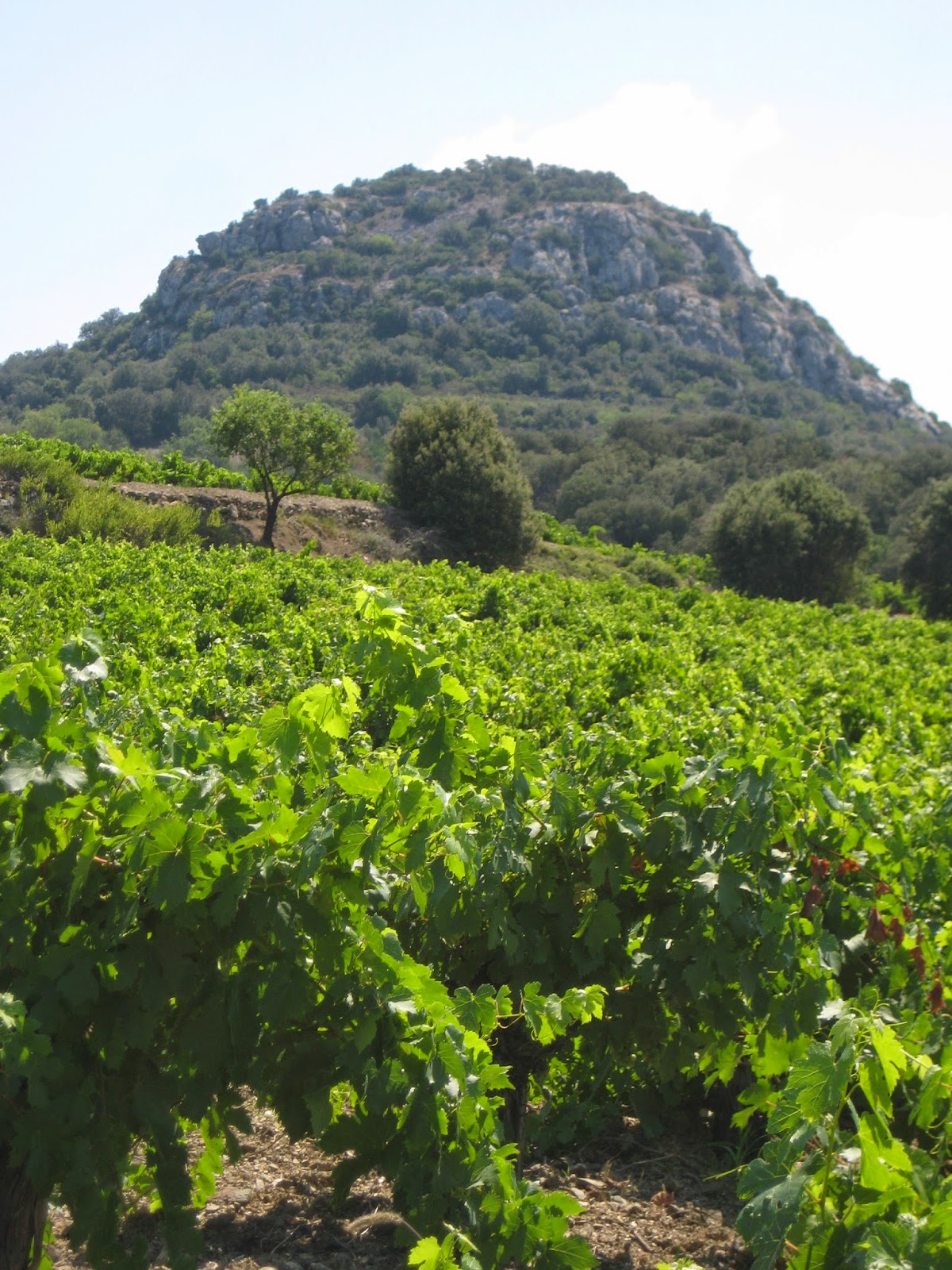 2013 Picpoul de Pinet.  A late vintage so that the grapes have a good concentration of flavour but have kept their natural acidity.  There is a fresh salty tang that all good Picpoul should have.

2013 Premises, Cabrières
Syrah, Grenache and a little Cinsaut.  Elegantly perfumed nose, with fresh acidity and a streak of tannin and minerality.  Stony finish.  Nicely crafted.  For Jean-Claude the tipicity of Cabrières is minerality, soft tannins and a flinty note from the schist.    Elegantly perfumed with a long finish.  Will be bottled at the end of September. 7.95€

Cuvée Château des Deux Rocs is 70% Syrah, the highest Syrah at 400 metres, with an élevage in foudres and barrels.  The principal criterion for ageing in wood is that there is sufficient matière for it not to be overwhelmed by the wood.    The wine was dense but elegant, with perfumed fruit.  It was rounded and harmonious, and the oak was nicely in balance with the fruit and some weight. Elegant tannins.  9.90€  Jean-Claude has modest ideas about pricing.  He wants everyone to be able to afford to buy his wine, even those on student grants.

2013 Bergerie d’Aniane.  Terrasses du Larzac
One third each of Syrah, Carignan and Grenache,  Élevage en foudre.  Rounded nose with ripe fruit and a fresh finish;  quite sturdy, quite firm and needing time.  You can sense the côté rustique  of the Carignan.  15.00€  It will be on sale next summer. 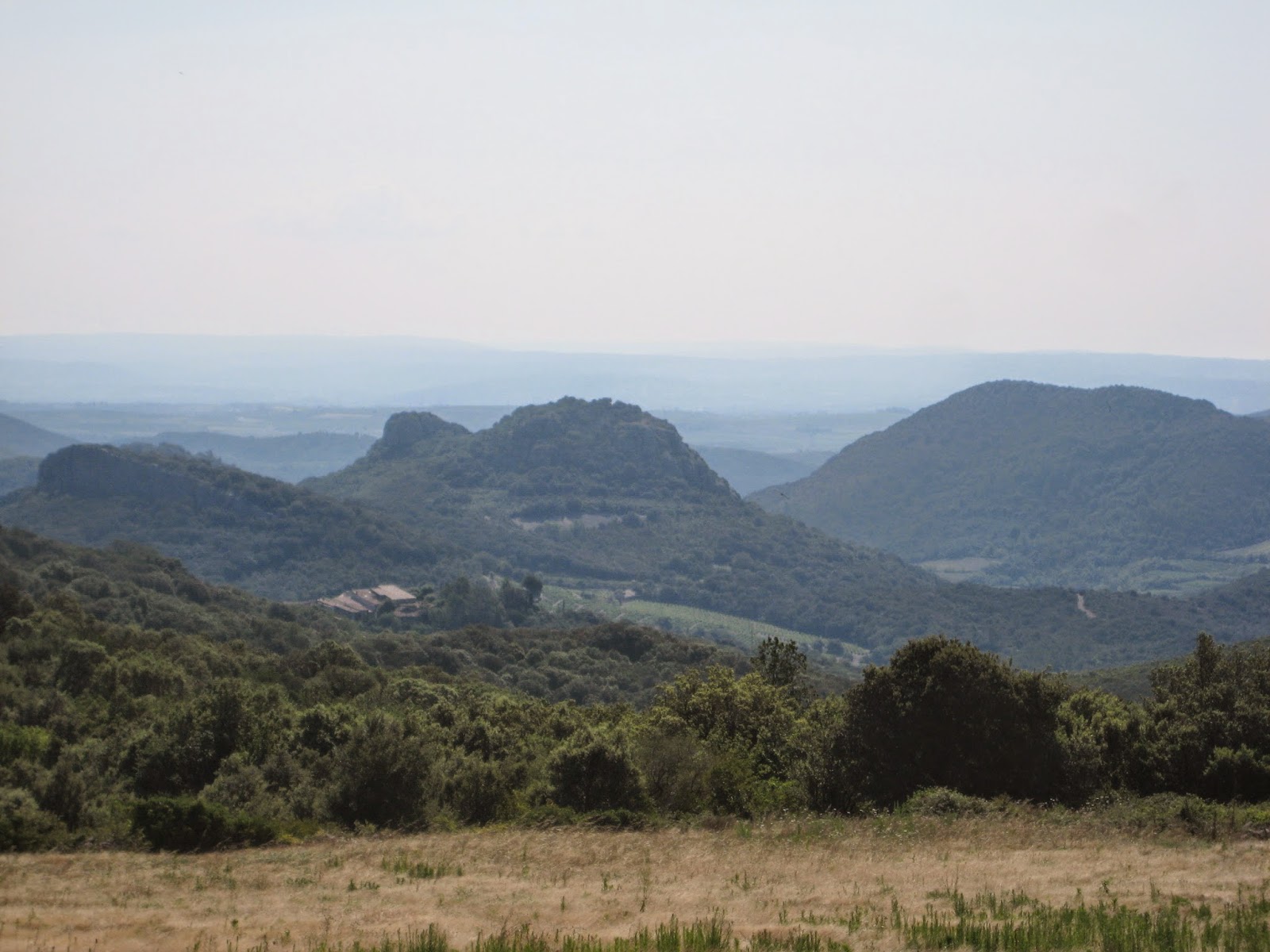 Alan March said…
Excellent discovery Rosemary, thank you. On the subject of boars in the Cabrieres area have a look at Véro Coris' blog
http://mas-coris.com/2014/09/06/cochon-genre-sanglier-qui-sen-dedit/

Graham said…
Must have cycled very close to the property a couple of years ago returning from lunch at L'Auberge du Presbytère. Delightful scenery but some tracks in poor condition as I went over the handlebars at one point!

Fascinating to read about all schist is not the same.

Following on from our conversation on Monday, if you would like to visit Domaine Ribiera I'd be delighted to help make the arrangements.
18 September 2014 at 16:23

Rosemary George MW said…
Alan - many thanks for drawing my attention of Vero coris' blog - another estate I would like to visit sometime.

and Graham, yes please a visit to domaine Ribiera would be sympa. I am racking my brains as to whether I might have tasted their wines at one of the bio fairs. Let me have your email address and then we can make a plan, but not this trip as I've not much time left.
19 September 2014 at 15:49