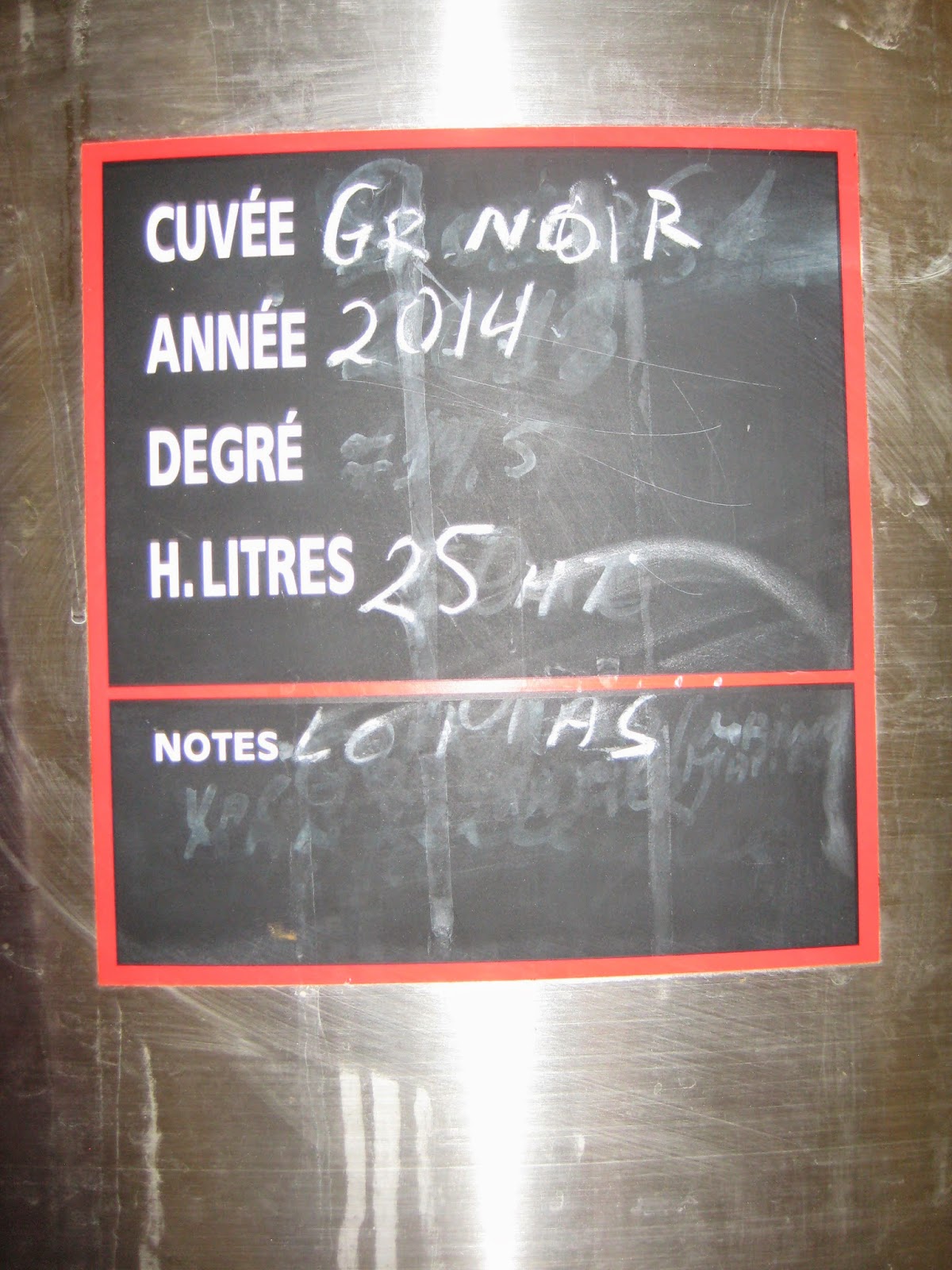 It is not just foreigners who come to the Languedoc to make wine, but also wine growers from other parts of France.  Eric Prissette made his reputation in Bordeaux, in St. Emilion,  where he created the tiny estate of Château Rol Valentin.   But by 2003 he was beginning to buy plots of land outside the village of Aspiran.  A cellar was built and in 2008 he left St. Emilion, but not Bordeaux, as he has also bought Château Roc in the Côtes de Castillon.

Eric was not around the afternoon I visited, but his assistant,  Elizabeth, was very welcoming and I also met the Bulgarian winemaker, Nenko Dunev, who has made the wine at Villa Symposia since the beginning.   He learnt his wine-making in France   Most of their vineyards are within the cru of Pézenas, but as yet they feel that there is very little effective communication about the cru.
The name symposia recalls the Gallo-Roman origins of Aspiran, and  the Roman idea of sharing wine.  On the label is a dragonfly, which is the symbol of aerien elegance, which is how Eric would like his wines to be perceived. 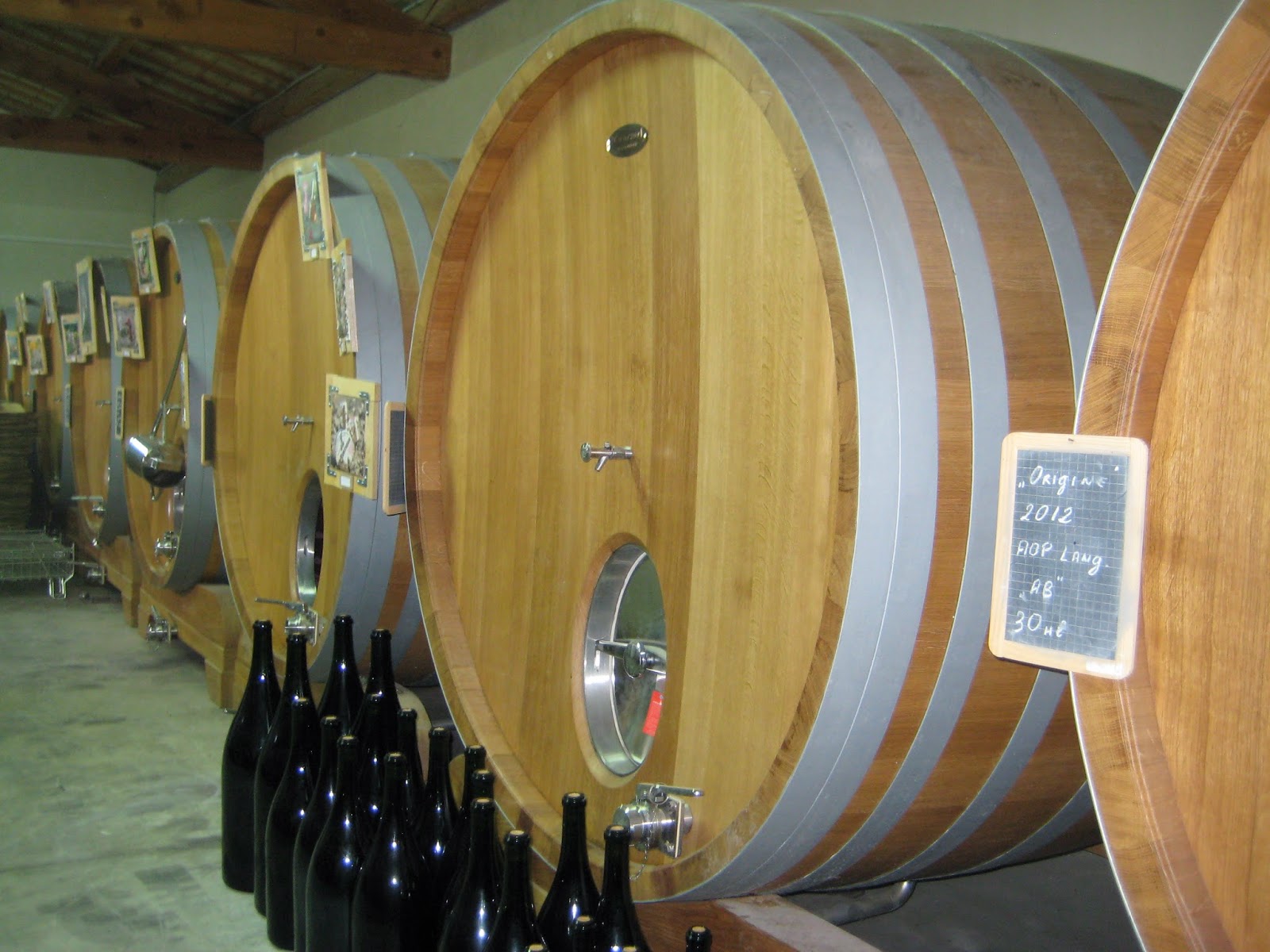 Altogether there are 20 hectares of vines, with 18 hectares in production, planted on argilo-calcaire and villefranchien, with galets roullées.  There are the usual five red varieties of the Languedoc, as well as some experimental Merlot.  And for white wine they have Terret, Carignan and Grenache blanc.    They have been organic since 2012 and are moving towards biodynamic viticulture.   The cellar is well organised and functional with the usual shining stainless vats.   And there are nine 30 hls foudres;  they began with bordelais barriques, but realised that larger wood gave more supple tannins to the red wines of the Languedoc, and for white wine they use demi-muids.

We tasted some juice from the Syrah that had been picked the previous day; it was ripe and sweet with some acidity.  I enjoy tasting juice, but feel that I lack the parameters really to know what I am tasting, but it is always fun to try.  A tank of Grenache picked a week early also displayed ripe fruit with acidy and tannin and good colour.  They are pleased with the harvest; the grapes are small, but ripe and healthy. 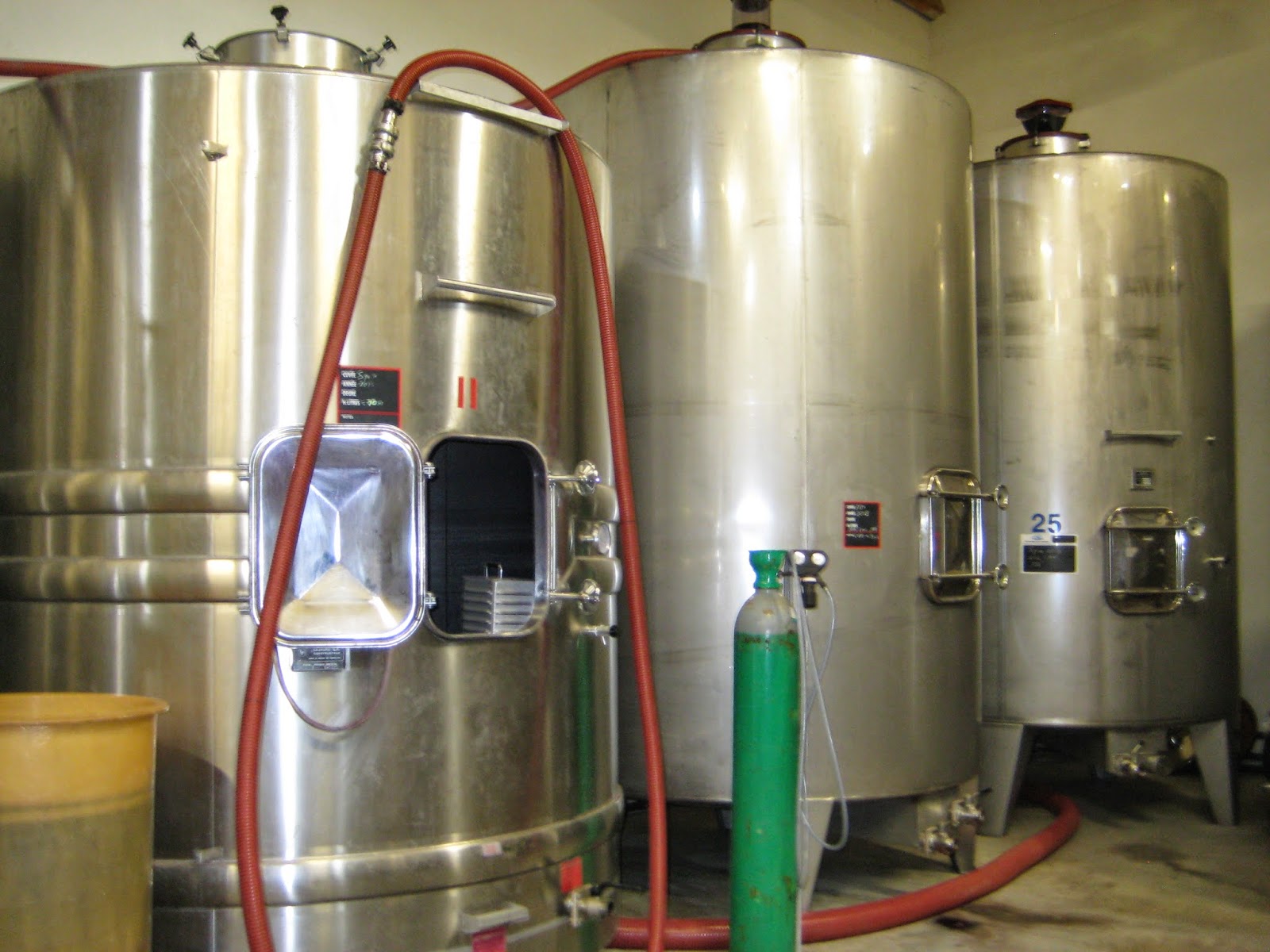 2013 Rosé, la Petite Sieste   - 9.00€
70% Cinsaut with 30% Mourvèdre.  Both saigné and pressed juice.   Fermented in vat and bottled after six or seven months.    Pale gris colour.  Quite a delicate nose, but with a certain weight.  Quite rounded and vinous on the palate, with dry fruit and some acidity.  Usually it is almost pure Cinsaut, but the Mourvèdre adds tannins and vinosity.

2012 L’Amphora, Languedoc – 9.00€
A wine to drink young and fresh within two or three years.  Young colour.  Attractive spice on the nose and palate, with some fresh fruit and supple  tannins.  No wood.  Cinsaut is the dominant variety with some Carignan, and also some fruit from young Syrah vines.

2011 Equilibre, Languedoc – 12.00€
60% Syrah, using older vines.  30% Carignan and some Grenache Noir and a little Mourvèdre.  The Syrah and Mourvèdre go into wood.    Good colour  Quite a firm smoky nose, with a touch of oak. Quite structured and youthful, with good fruit; rounded and fresh with a good balance and well integrated oak.    Opens up nicely in the glass. 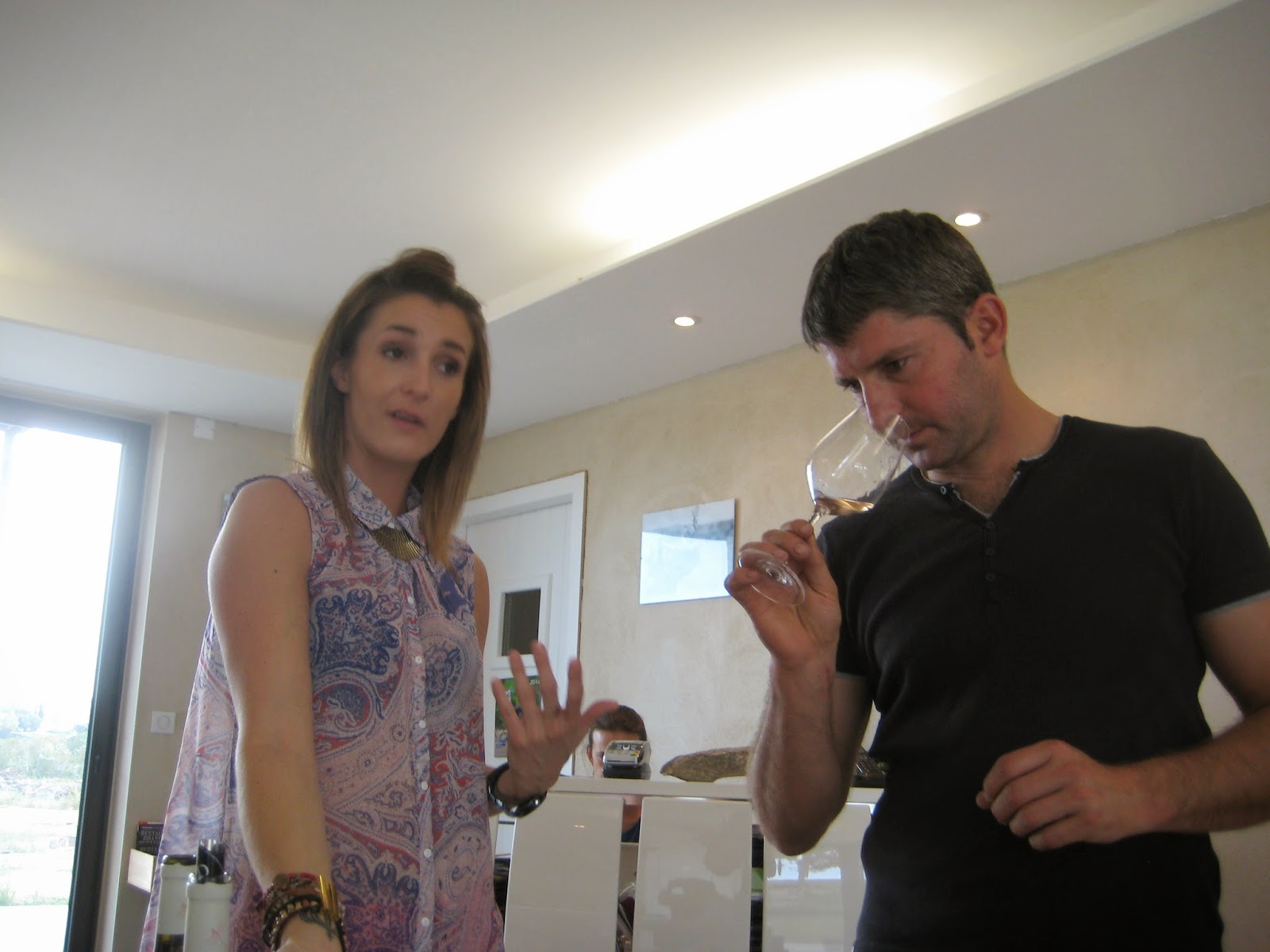 2010 l’Origine, Pézenas. – 24€
From the oldest Syrah that are 47- 48 years old, grown on the best terroir, villefranchien, with a little Grenache.  Aged in foudres for 18 months.   The blend has varied – in 2012 the Syrah was blended with Carignan and the élevage has lasted two years.

Deep colour; some oak on the nose; quite firm and structured; tight knit with firm tannins.  Quite elegant.  A dry finish.  Youthful.  Need to develop in bottle.   Elizabeth observed that they have moved away from riper heavier Syrah.

2012 Blanc, Vin de France  - 13.00€
One third each of 70 year old Terret, 45 year old Carignan and 30 year old Grenache blanc.  They had a problem with the labelisation tasting in 2011, when the panel deemed the wine to be too oxidative, so it was  declassified into Vin de France, and so in 2012 it remained Vin de France.  Light golden.  Leafy honeyed nose, which open up  nicely.  Good acidity on the palate. Some floral notes, with satisfying texture, from minerality and acidity.  It is aged in old demi muids for nine months, without any bâtonnage.  It is nicely understated with a satisfyingly long finish.
And we finished with a tasting of 2013 Mourvèdre en plein élevage.  The vines are now seven years old.  Nenko observed that Mourvèdre is capricious  -neither 2011 nor 2012 were so good, but he is particularly pleased with the 2013, and I could see why.  There was ripe rounded fruit and a very good balance of tannin, with some spice, and explosion of fruit, with an elegant finish.   Nenko has also tried making a pure Carignan in 2012, observing that it is good  to make and taste mono-cépages as that helps you understand the blends. 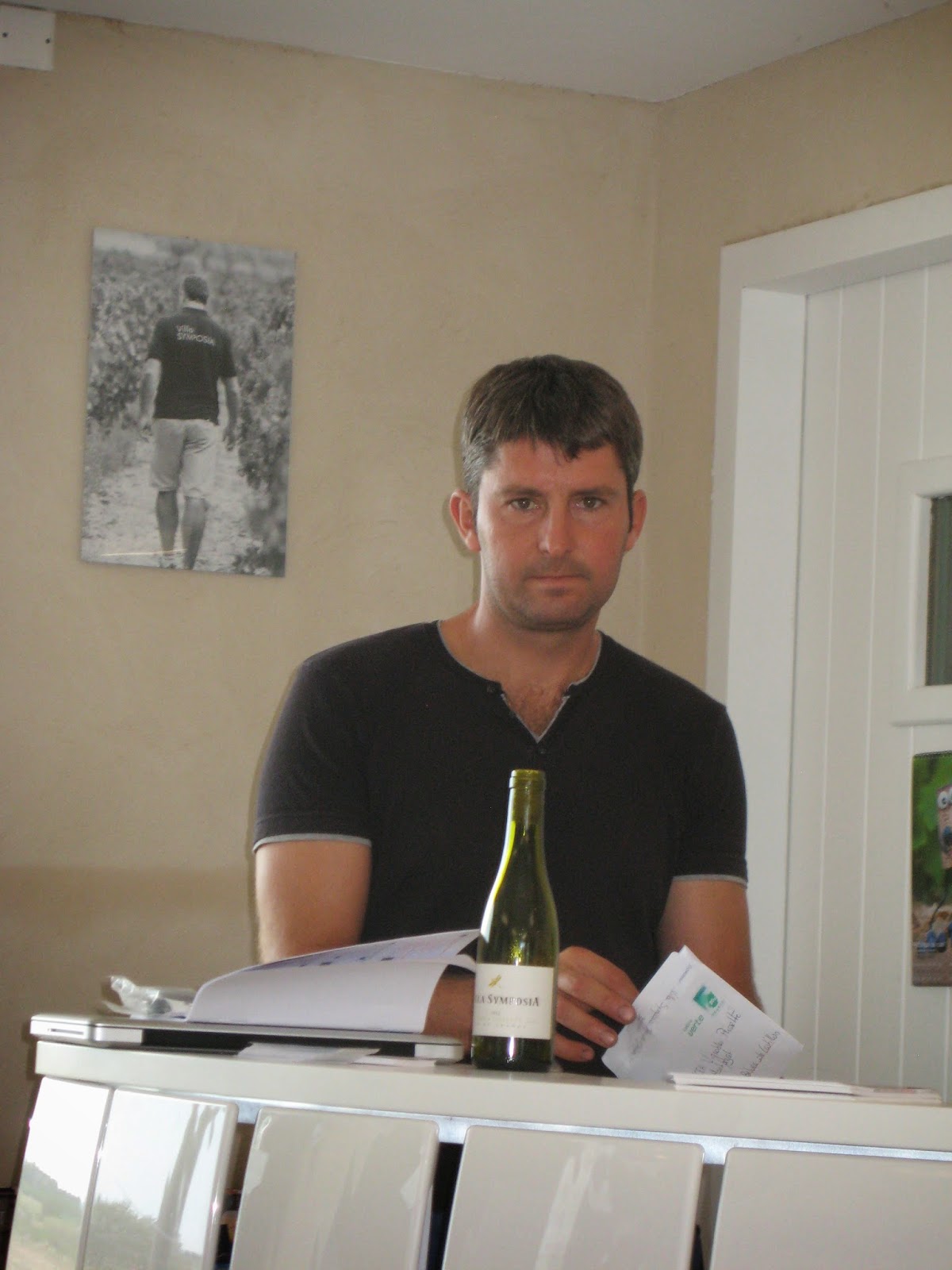 The world is full of coincidences.  As it happened, I had just finished writing this post a week or so ago, when I received an email from Alexandra Level, first  telling me about her new business, and when I asked what she was doing in the Languedoc, the reply was: my next offer is Villa Symposia.  No one sells their wines in the UK, but for the first  week of October they are available from :


So do check the website of this bright new company.

and for more on Villa Symposia:  both for wine and holiday gites: