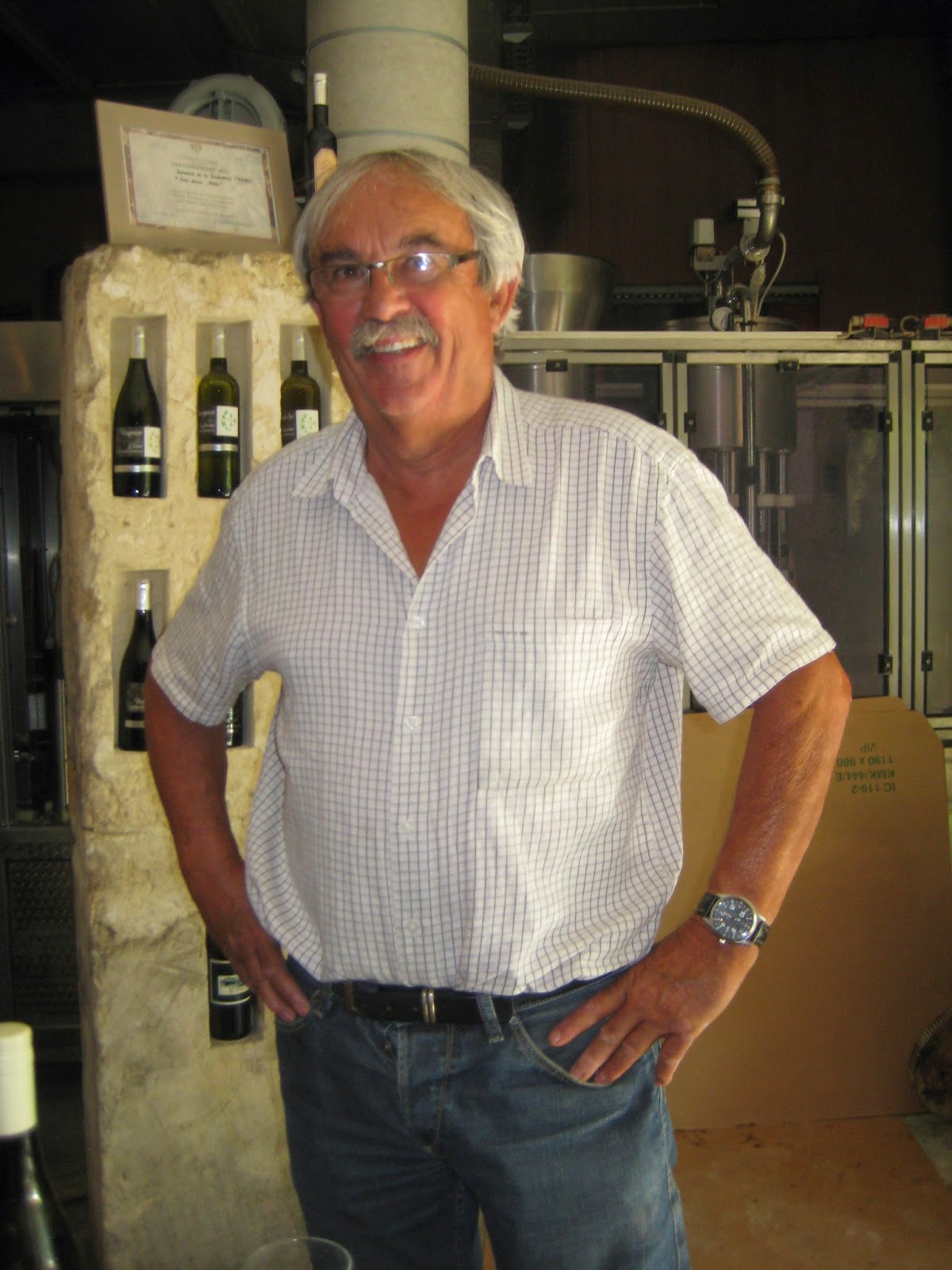 It has been a while since I have visited Domaine la Condamine l’Evêque.  Guy Bascou was one of the pioneers of the Languedoc, involved in the region for some forty odd years, and amongst other things president of the new appellation of Picpoul de Pinet.  While waiting for Guy, I had a brief conversation with his son, Guilhem.  Naturally the immediate topic of conversation was this year’s vintage.   There has been a winter drought between Beziers and Montpellier, with an inevitable impact on quantity – down at least 30%, but some areas are even worse.   They started picking on 23rd August, which is about the average, but this year they will finish earlier; he anticipated about 17th September.   In contrast last year they started on 6th September and did not finish until 24th October.    Picpoul is usually ripe at the end of September,  but this year they picked it on 4th September. Guy arrived, with the observation that sales of Picpoul de Pinet are exploding.  The appellation now produces 7 million bottles, mostly bottled in the distinctive tapered bottle.  And 240 different clones of Picpoul have been identified. 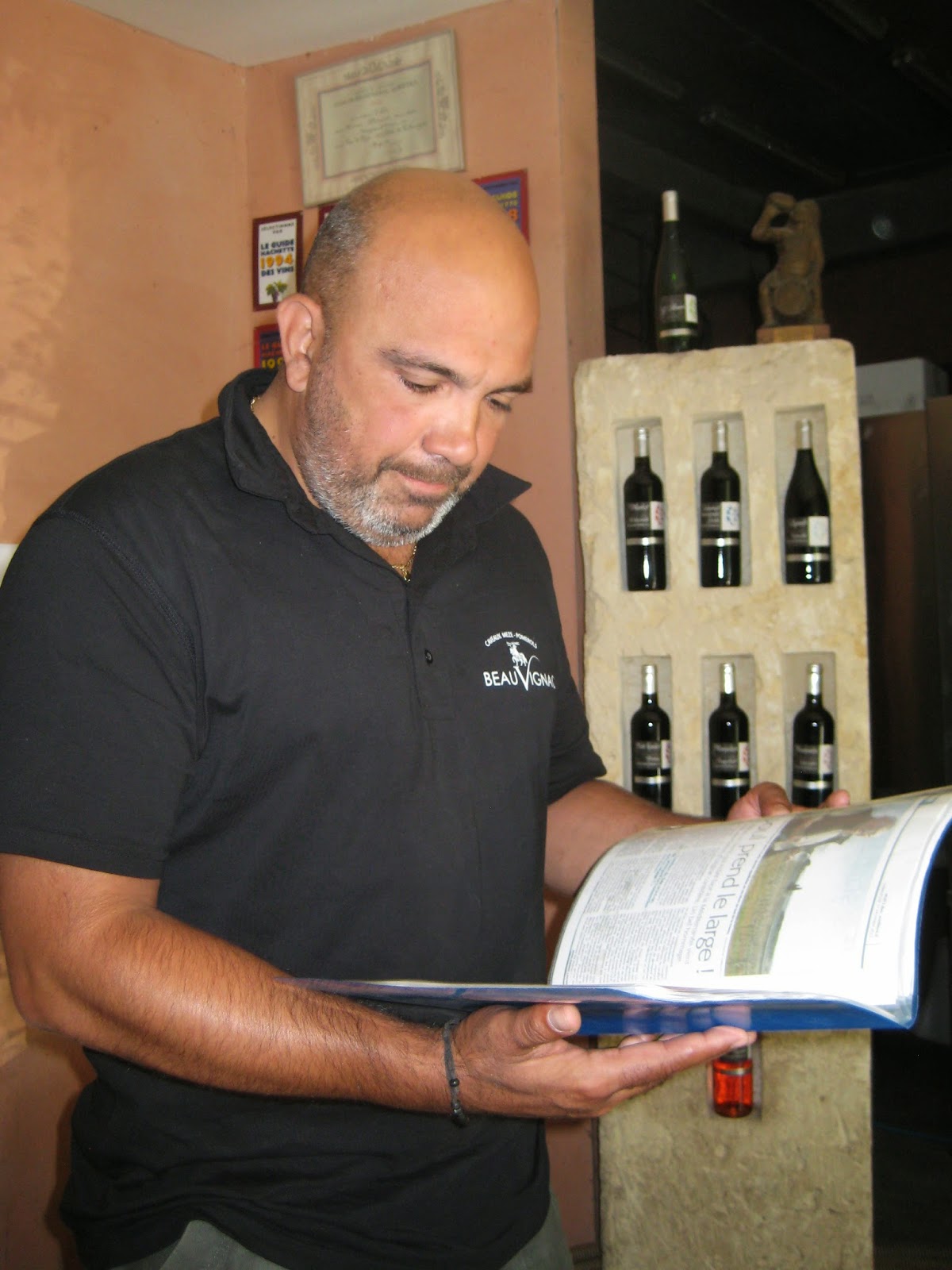 Condamine means champ du maître.  All the wines are named after former bishops of Agde, who had a palace in Lézignan l’Evêque.  They preferred to live inland, because of the danger of malaria on the coast. There is also a Domaine Condamine Bertrand in Nézignan la Cèbe.

And we settled down in the welcoming tasting room – you can buy free range eggs, tomatoes and table grapes there, as well as wine.  The tasting caveau is open every morning from 9 – 12.30.  The small barrel room is next door.

Guy is un fils de vigneron from Pomerols, and it was his grandfather who created the coop of Pomerols, which is today one of the key producers of Picpoul de Pinet.  Guy keeps his Picpoul vines with the coop.  The vineyards around Lézignan l’Evêque are on villefranchien terraces, with fossilised shells. 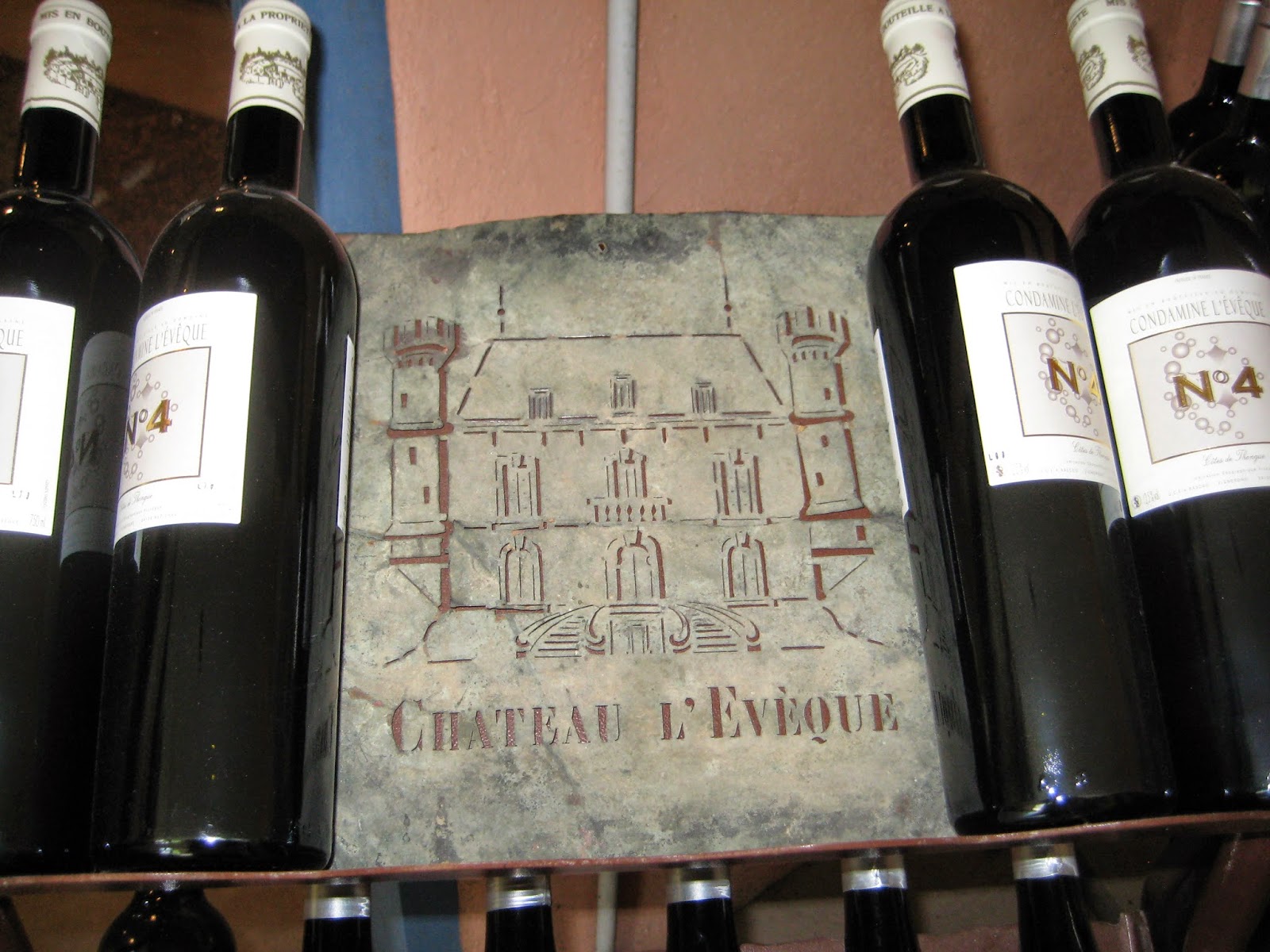 A nugget of local history.  They have an an old stencil in the cellar, depicting the old maison bourgeoise, which is now the Hotel St. Alban.  The stencil shows the building with towers; in fact the hotel has none.

And now to taste:

2013 Sauvignon, Sophrose, Côtes de Thongue – 5.50€
Quite a fresh firm nose.  Firm and stony with a mineral note.  Fresh and youthful.  The vinification process is  what Guy called modern but classic; maybe modern has now become classic,  with a cool fermentation at 16-18˚C. It is Guilhem who is now in charge of the winemaking.    He studied in Montpellier and has a BTS in oenology.  He has spent six months with Roederer in California and also worked in Robertson in South Africa and came back to the family estate in 1997.

2013 Picpoul de Pinet, with Guy’s signature.  5.50€  Guy explained the coop at Pomerols lets him chose his own cuvée, even though his grapes from his 6 hectares of Picpoul go into the communal vat..  Quite a discreet nose with quite a fresh salty sappy tang and good acidity.  A touch of iodine and some white flowers and good weight.

2013 Viognier – 6.50€
Light colour.  A hint peachy.  Nicely balanced,  Guy observed that hygiene and cooling equipment, le froid, have made an enormous difference to the Languedoc wine making, as well understanding how to protect the wines  from oxidation.

2013 Mourvèdre, Georges – 4.50€
Medium colour.  Quite firm nose.  Dry red fruit.  Élevage in vat.  From vines that are 30 years old or more.  Quite firm with some fresh fruit.  Light tannins and still youthful.  A hint of leather and some spice.

2012 Syrah, Vermiste - 4.50€
A denser, slightly confit nose.  Some good peppery notes on the palate.  Quite ripe, with a fresh finish.  Élevage in vat. Once upon a time there was talk of an appellation for the Côtes de Thongue, but that idea has been quietly dropped.  ‘The great advantage is that we can do what we like, and we would lose that with the appellation’, not to mention that the yield for the AC would be 50 hl/ha as opposed to 80 hl/ha.   .  Altogether there are about 50 – 60 producers of Côtes de Thongue, making it one of the livelier vin de pays, with a distinct identity. 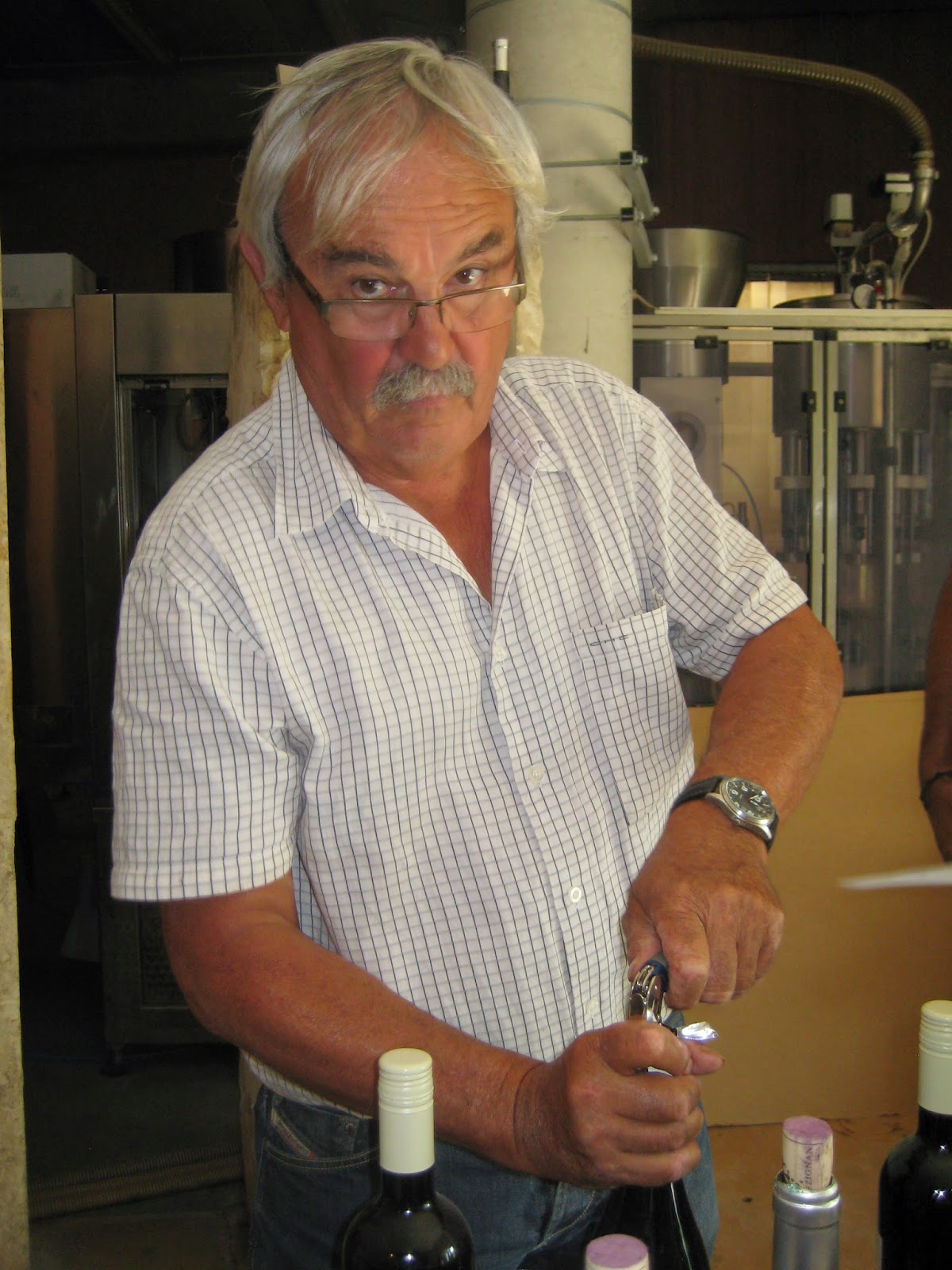 2011 Béticus, Languedoc – 6.50€
Syrah, Mourvèdre.  A touch of oak.  Quite a sweet confit nose, quite a rounded ripe palate.  A touch of sucrosity on the finish, from new barrels  Easy drinking.

2010 Château la Condamine l’Evêque, Languedoc - 10.00€
A selection of the best plots of Syrah and Mourvèdre – vines that are forty years old.  Three weeks on the skins.  20% in wood.  Deep colour.  Good weight, with fruit and body and some lovely ripe spice. Very satisfying – and delicious.

1999 Folie Douce
Petit Manseng. Harvested in December.   Bottled about five years ago.  It goes into demi-muids, with no sulphur and ferments very slowly for two or three years, stopping naturally when the yeast are exhausted.  The dessert wine d’autre fois, observed Guy.  .  Golden amber and very bright.  Notes of orange, dried figs, walnuts, orange marmalade. With refreshing acidity and a slightly burnt toffee  finish.   Petit Manseng is naturally acidic.  You could say a Mediterranean version of Jurançon.  Very intriguing.  Sweet but with acidity. 14˚ alcohol + 5˚ equivalent sugar.

And then we tasted the 2002 from barrel, which was more caramel with less acidity, and a little more oak on the palate. Riper and softer;  smooth and unctuous, with a bite of acidity.  And the 2000, also from barrel, was amber gold with more of a bite on the palate, as well as a touch of Bovril. 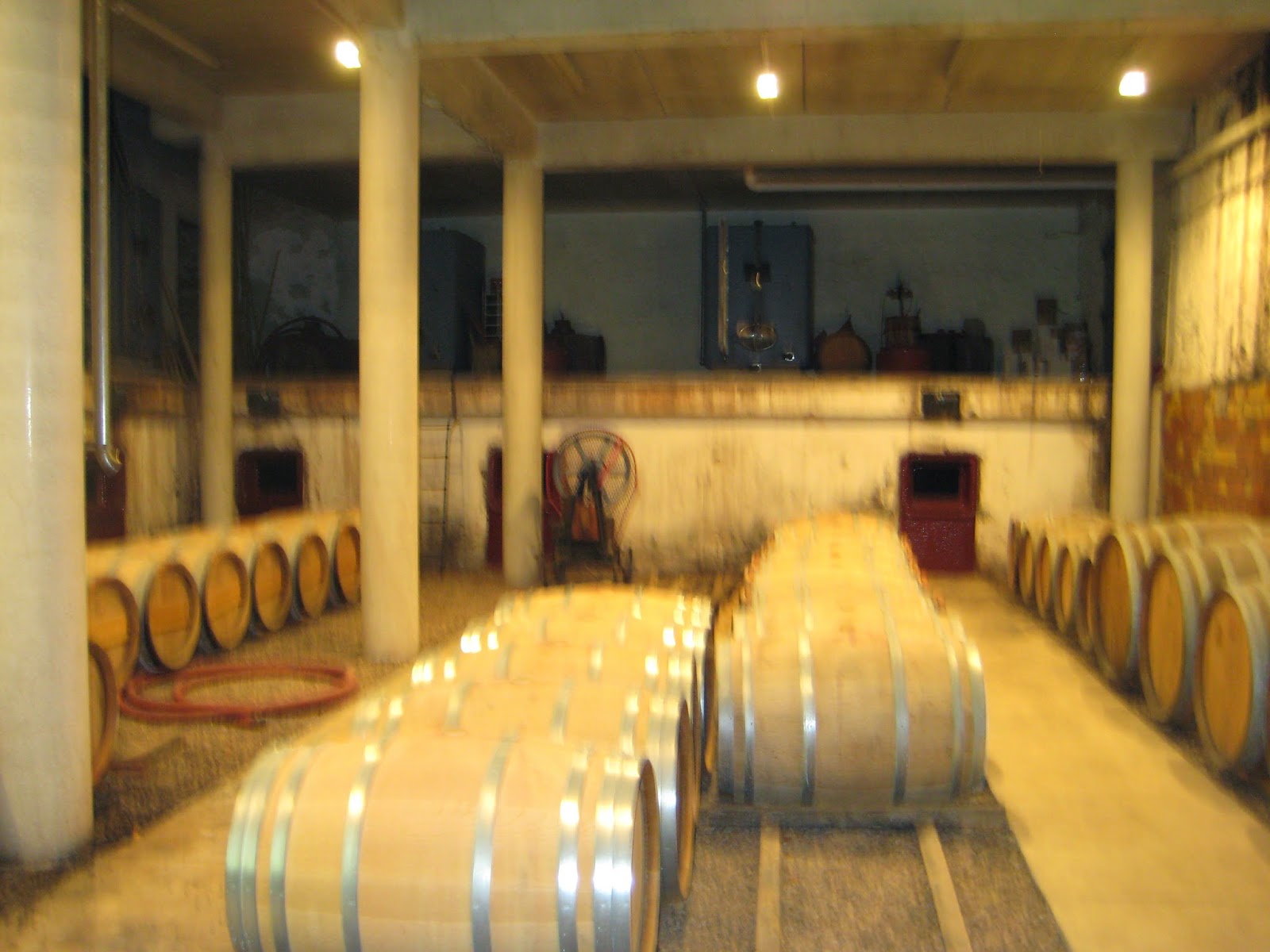