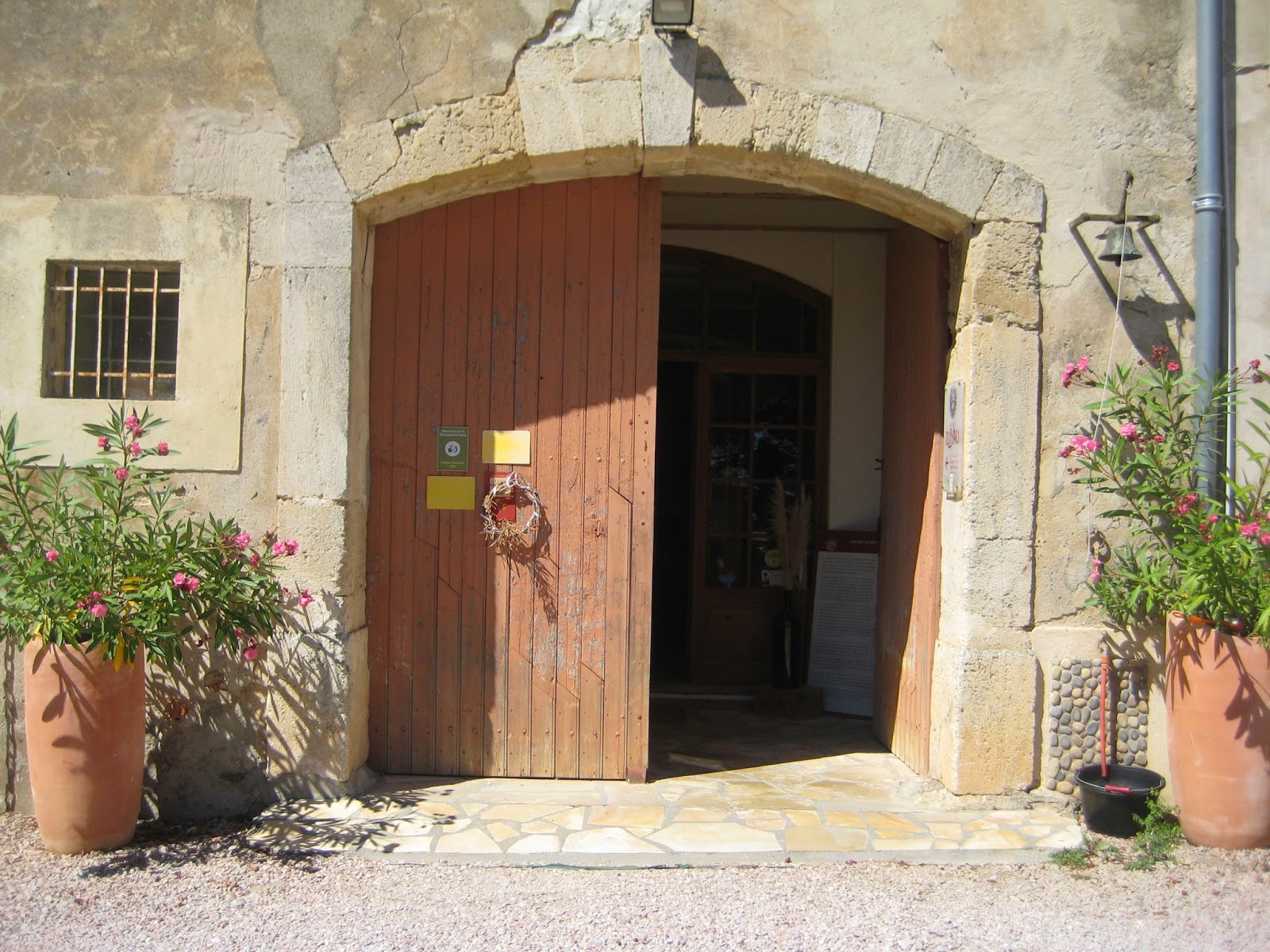 It has been a while since I had visited Château Moyau on La Clape.  Actually the estate is very close to the sea, rather than up in the hills of the massif.  It is one of a row of estates bordering the evocatively named Etang de Pissevaches, with Négly, Anglès, and Mire l’Etang.  Bernard Köhler is the German owner, and although he is passionate about his wine and his estate, he tends to be an absentee vineyard owner, leaving the full responsibility of the everyday running of the estate to my friends Peter and Susan Munday.   He bought the estate in 2004, for a first vintage in 2005, which was made by Stephanie Chanot who has now gone on to pastures new.  Mr Köhler restored a ruin, and an estate that sent its grape to the local cooperative.   Peter and Susan arrived at Moyau in November 2009, so 2010 was their first full vintage there.    It was not an easy year; there was a storm at the end of September when 240 mm rain fell in 24 hours, so the deciding quality factor was: picked before or after the storm?  Both 2009 and 2008 were very good vintages. 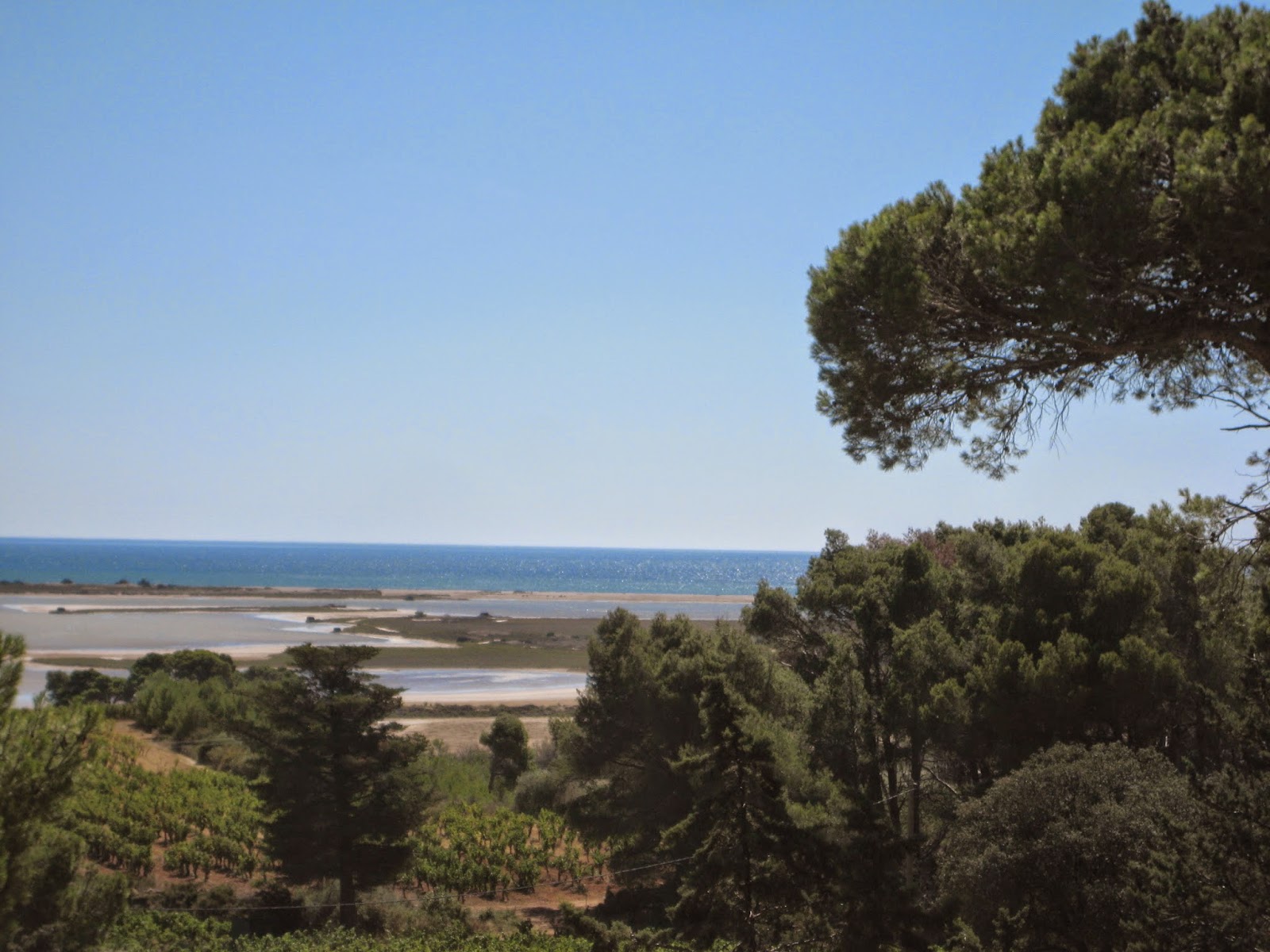 First we had a chat about the weather this season.  The quantity is not enormous; another weird year, muttered Peter.  They had a very dry winter, and since June there have been regular weekly showers.  Then for a week at the end of August there was a north wind blowing and it was wonderfully sunny.   Surprisingly perhaps they usually have one small snow fall each year; it usually melts by lunch time. 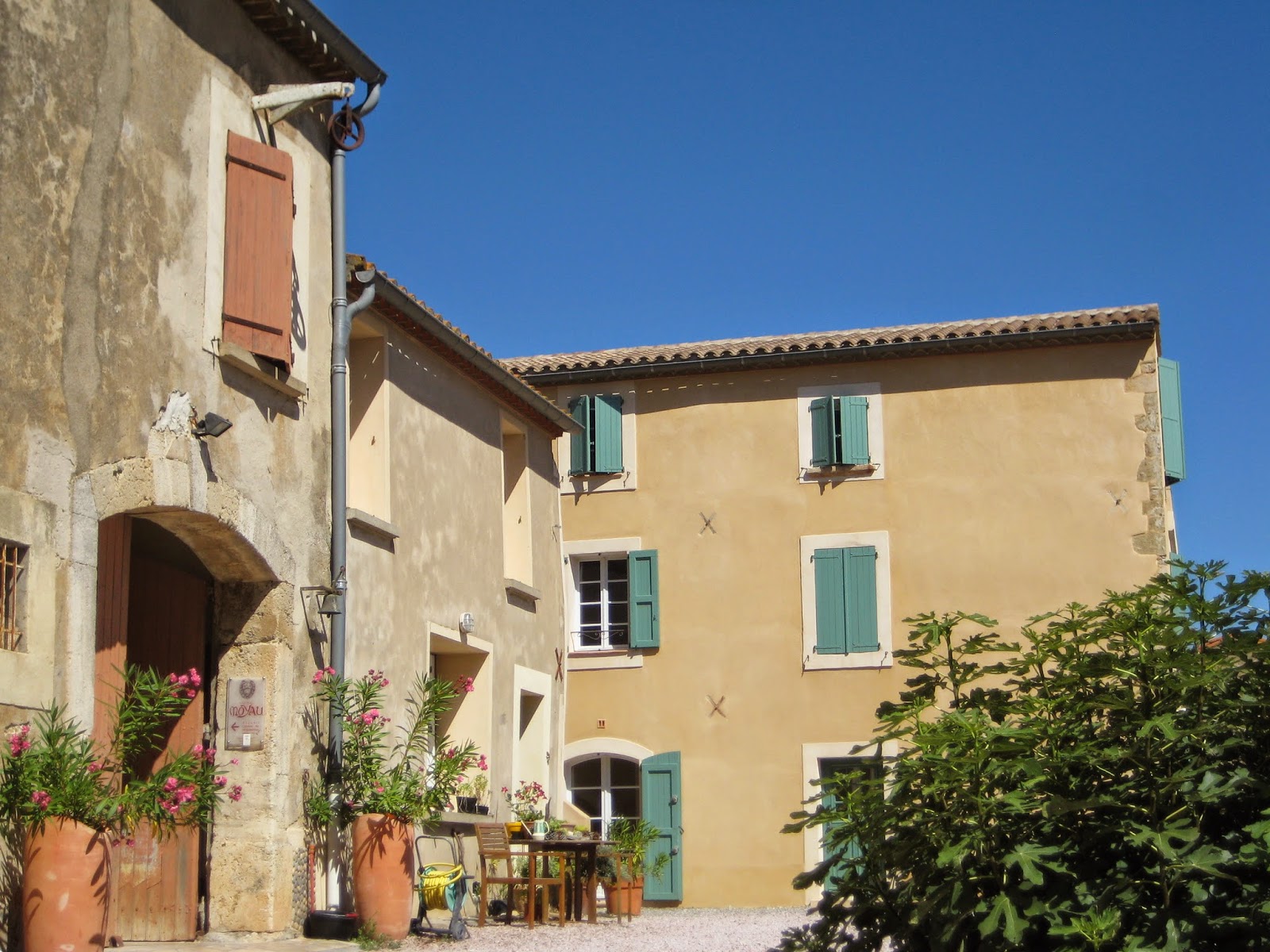 Château Moyau comprises 23 hectares of vines, with a total of 60 hectares of land.  The rest is garrigues.  There are vines at sea level and more up in the middle of the garrigues behind the cellar.   And 2013 was a difficult year for them too.  They had a vent marin, a wind coming off the sea throughout September and October into November, so that they were harvesting in 90% humidity, in warm fog.  Usually this happen perhaps one day in five, but in 2013 it persisted.  And the effect on the grapes was pretty devastating.  They went from being ripe to rotten in a matter of hours.  So the quantity was well down.  And they had already been severely affected by a fire in the garrigues behind them, with grapes so badly tainted by smoke taint that they could not be used.

The cellar is a simple functional building, with some barrels, and stainless steel and concrete vats.  We chatted in the welcoming tasting caveau. 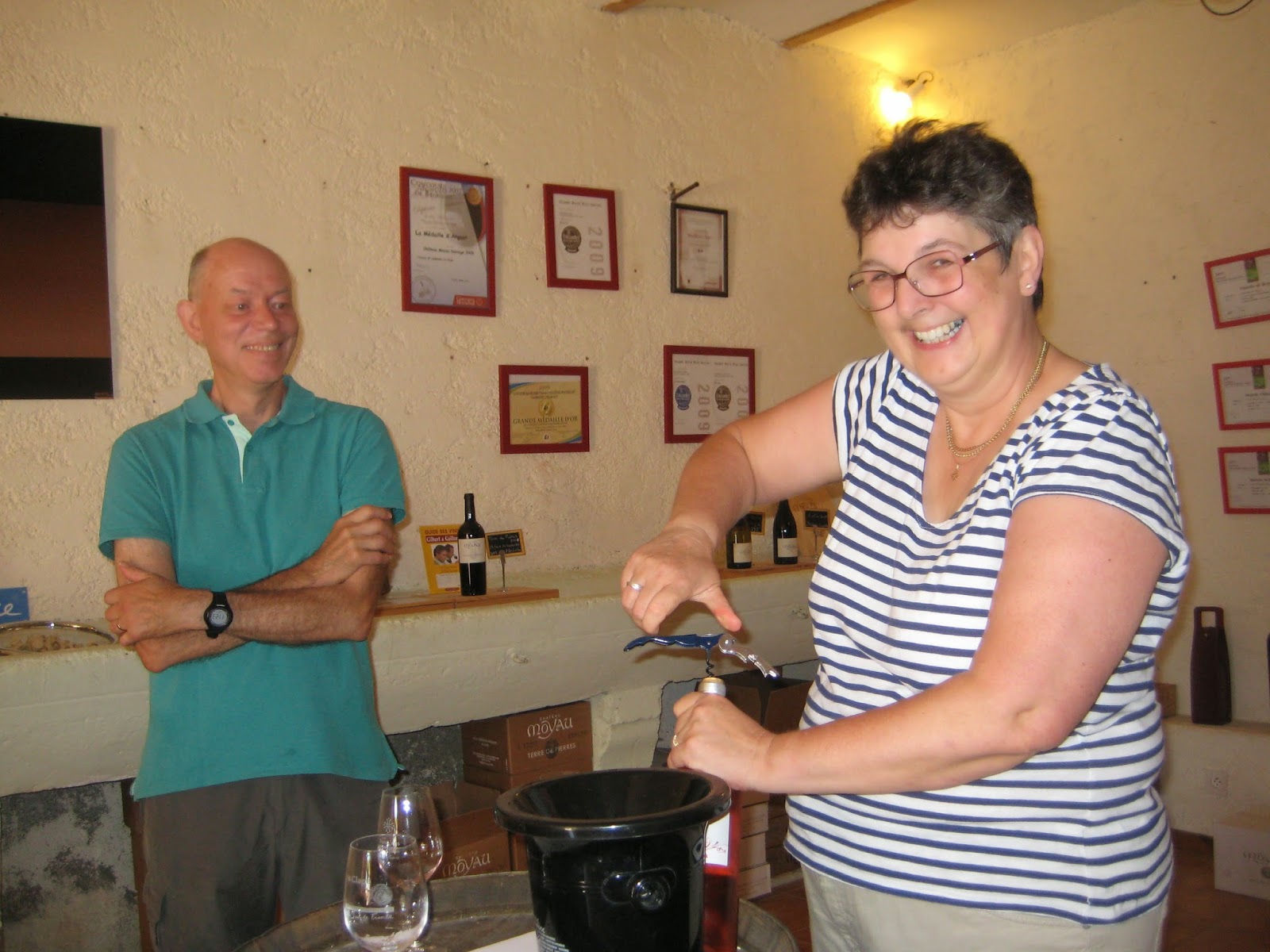 2013 La Mer blanc, Coteaux du Languedoc  – 7.50€
Bourboulenc, Grenache blanc, Roussanne, Vermentino and also a drop of Viognier which is not allowed in white la Clape.  It was planted when there was a possibility that it might be included.  Light colour.  Quite fresh salty, lemony nose.  Light and fresh with a salty, slightly almondy palate.  Good acidity.  They have a plot of Grenache blanc and Bourboulenc, planted mixed up altogether, that are 70 years old, while the other varieties are much more recent additions.   Bourboulenc and Grenache give structure and the other varieties the aroma.   The soil is dry and sandy.

2009 L’Unique, la Clape – 14.00€
A blend of Grenache blanc and Bourboulenc. Quite rounded and buttery and lightly oaky with a hint of toffee.  About 45% was fermented in oak.  2009 was the last vintage of this cuvée as these grapes now go into La Mer.  It was ageing nicely for a Midi white that was five years old.

2013 Le Flamant, la Clape, rosé  – 6.30€
Cinsaut and Grenache, saigné.  Mourvèdre is usually included but not in 2013, because of the fire damage, but Peter was aiming for a similar style to previous vintages  Pink orange colour. Quite herbal and rounded.  A certain juicy note.  Some weight.  A long finish.  Definitely a food rosé.

2013 Le Soleil, Languedoc – 6.00€
A blend of Grenache and Cinsaut.  Medium colour.  Quite perfumed on the nose, and a touch confit.  This is a summer red, ripe and easy with a streak of tannin, and benefits from chilling.

2009 Sauvage, la Clape – 9.50€
Grenache, Syrah and at least 50% Carignan.  No oak.  Quite a deep colour; sunshine and herbs in a glass, on both nose and palate.  Some herbal notes and also some leathery notes.  Nicely intriguing.  From the higher vineyards.  A slightly rustic edge, appropriate to Carignan.

2009 Terre de Pierres, la Clape – 13.50€
Grenache Noir, Carignan – 10%, Mourvèdre – 15%, Syrah.   40% élevage in oak for 12 months, and then a further 12 months in tank. Good deep colour.  Nose refined by the oak, but some garrigues fruit too.  Nicely balanced fruit with a certain warmth.   Supple tannins.  Peter explained that they are gradually shifting way from oak, moving from 225 litre barriques to 300 and now 500 litre demi-muids.  And when I asked him about the tipicity of la Clape, he ventured that it was more aromatic and less tannic than neighbouring Corbières
.
2009 1792 la Clape – 23.50€
Almost pure Grenache, with 70% spending two years in wood, old barrels including a 60 hectolitre foudre.     Keep Grenache away from barriques, observed Peter.  Medium colour.  Quite warm ripe sweet cherry liqueur fruit on the nose.  A tannic edge from the oak on the palate, with ripe cherry fruit.  A touch alcoholic on the finish.   And why 1792?  It refers to a document dated 1792 in which Moyau, or Mautyau as it was spelt then, is mentioned.

2007 Enfin la Clape – 30€
Grenache Noir, Syrah, Mourvèdre.  Good colour.  Quite a rich leathery oaky nose.  Quite firm and sturdy on the palate.  Rich ripe and oaky. The big brother of Terre de Pierres.  The best barrels of Terre de Pierres are given a second year of élevage.   The finish is solid and gutsy, warm and rich.
Susan alked about living on La Clape, obersing that it is a site classé,  a protected site. Consequently no new buildings are allowed, not even a swimming pool, and you also have to observe la loi du littoral, and the regulations designed to protect the coast line.

2008 Hallucinant, la Clape – 60€
A pure Mourvèdre that spends two years in wood; the entire cuvée in 500 litre barrels.  And just 2000 bottles were made.  Good colour.  Quite firm and solid and on the palate, quite rich and dense, and some of the viandé notes of Mourvèdre.  It is still very young, and should develop more in bottle, but I have to admit a preference to the lighter, more elegant wines.

We talked about sales, for most of the wines on sale are quite mature.  Peter explained that he has increased the yields, from 20 hls / ha to a more reasonable 35 hl / ha.  But this has meant that there is more wine  to sell, and that is Mr. Köhler’s responsibility, to expand the market in Germany.    And after the tasting, Peter took me to look at the vineyards, and I realised how close the fire had come.  Vines provide an effective firebreak; the other vegetation is returning, but it will take time.  And then we adjourned for lunch, which included a delicious tomato salad, and Peter enthused abiout the 33 different varieties of tomato that he grows! 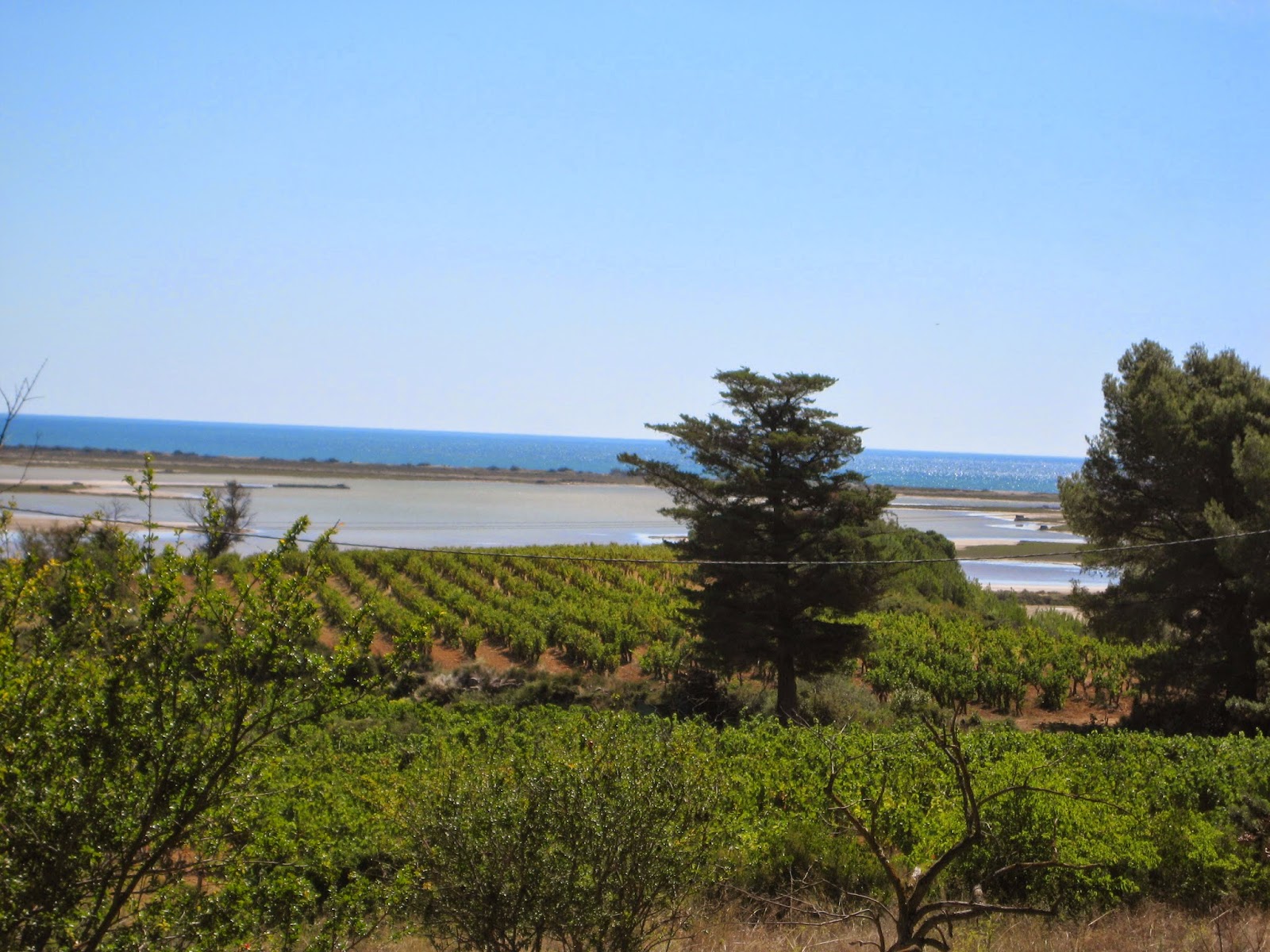