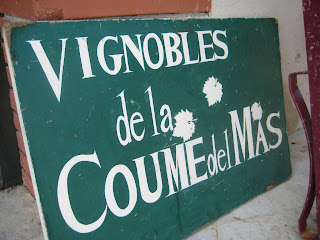 Coume del Mas has cellars up in the hills outside Banyuls with a great view of the sea, and a vineyard called Amathus..   Philippe Gard began my visit by introducing the estate,  explaining that he had been brought up in Paris and had worked in Bordeaux and Burgundy and that his parents have a house in Banyuls.   His first vintage at la Coume del Mas was 1997.  He has twelve hectares divided into about 35 plots, in three different zones of Banyuls.  His aim is to stay small, to retain la taille humaine. 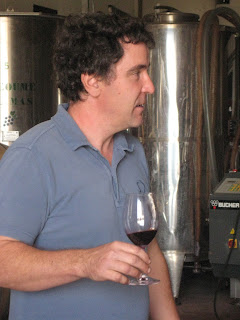 He is also associated with Mas Cristine, situated between Collioure and Argelès, working with Julien Grill.  They took it over from the Dauré family in 2006.   It complements the range, with different soils, but the same philosophy.  However,  there are differences; Philippe observed that Mas Cristine ‘easier and more technical’.

Andy Cook, Philippe’s colleague, arrived from New Zealand in 2007 to do a stage at Coume del Mas, and stayed on, so that he now makes the wine at Mas Cristine.  And they also have Terrimbo, a small organic estate in Collioure.  Altogether they make about 30 different wines including vins de cépages at Mas Cristine, and also have a small négociant activity called Tramontane for varietal vins de pays, Macabeo and Grenache Noir 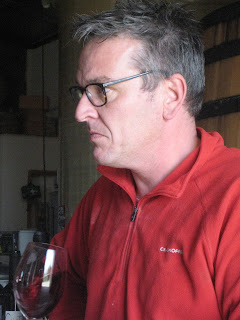 Then I was treated to a very comprehensive tasting followed:

2014 Mas Cristine Blanc, Côtes du Roussillon.  11.30€
The property adjoins Collioure, with some schist, while some of the vineyards are more mixed, with stone and clay, gneiss from the Albères and grey schist.  Some of the vineyards are tilled.  As for greapes, a blend of Grenache Blanc, Gris and Macabeo, in other words the three classics.  Roussanne was already there, and they planted Vermentino six years ago.   The first plantings of Vermentino, Roussanne and Marsanne began in 1985, with the idea of including them in the appellation of Côtes du Roussillon Blanc; this finally happened in 1998.  The first white wines were made Grenache Blanc, and then Grenache Gris.  Originally those varieties had been used for Vin Doux and then it was realised just how good Grenache is good for vin sec.

This wine is very much sur le fraicheur with no new wood.  One third of it goes into old wood, for the richer varieties, whereas Macabeo stays in vat to retain the mineral notes.  A tight knit palate; firm and structured with some weight.  Five months élevage and bottled before the summer.  A touch of oak on the nose, which also gives some structure.
2014 Collioure Blanc, Coume del Mas Folió  - 17.50€
Mainly Grenache Gris;  old vines, planted in the 1960s, with a little Grenache Blanc, Carignan Blanc and Terret Blanc.  Rounded white peachy fruit, and white blossom.  Nicely textured, agrumes, fennel, zest.  Lots of nuances.  Fresh with good acidity.  Some saline notes, stemming from the proximity to the sea.  The oak is nicely foudu.   15% new barrels and a yield of about 23 – 25 hl/ha.  They press 500 kilos at a time, débourbe and then the juice goes into barrel for the fermentation.

So what is the tipicity of Grenache Gris?  For Eric Araucil from the CIVR, mineral, agrumes, salinity but not so much structure.  The appellation of Côtes du Roussillon allows for more Roussanne and Vermentino, but not much is actually made.

And then we tried a few tank samples of the 2015 vintage.  They began the harvest on 17th August. The Grenache Gris, côté mer was picked about 23rd August and the last whites on 7th September.   The more précoce areas were blocked in June by the heat, but the later areas caught up and were picked earlier.  Some rain in August in Banyuls helped with the balance of the grapes.  They would not need to lees stir this year.

2014 Terrimbo, Collioure Rosé  - 12.00€
A lieu-dit between Banyuls and Collioure.  A blend of Syrah and Grenache.  They make rosé from the vines on the edge of the vineyards, because of the neighbours’ sprays.   Fermentation and élevage in wood.  Bottle in June.  Pressed.  Bottled in May, which is pretty late for a rosé

2014 Mas Cristine, Côtes du Roussillon – 11.30€
This will become Côtes du Roussillon Villages les  Aspres.  50% Syrah, with 40% Grenache Noir and 10% Carignan.  Two weeks on the skins.  The Grenache is kept in tank to retain the fruit, with the Syrah and Carignan in wood, but none new.   In Collioure, however, the Grenache happily goes in to wood.   They buy 5 or 6 one year old barrels each year.  2014 was a cool year. Medium colour. Quite ripe dry cherry fruit with some pepper.  Medium weight.  Youthful and fresh.

2014 saw the  opening of a new winery at Mas Cristine, making for better control of everything.   Léon Cristine was mayor of Collioure at the beginning of the 20th century and this was his family property, a holiday house.  He had a big négociant business, before the cooperative was set up, buying juice that was muted, so that the wine growers paid for the alcohol. 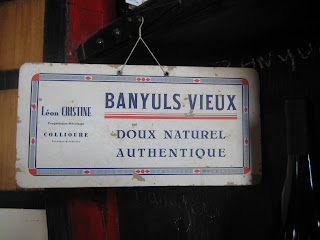 2013 Terrimbo, Collioure – 21.00€
Maritime influence.  Syrah and Grenache, from the plot surrounded by rosé.   Syrah in large wood, and Grenache in vat.  Terrimbo comprises 1.5 hectares of very poor soil, certified by Ecocert.  A lot done by hand, as it is difficult to use a tractor, but they can plough with a horse.  The cellars for Terrimbo are near Mas Cristine.

Quite a solid, rounded nose, with some weight on the palate.  Quite firm and tannic.  Youthful sturdy fruit.

Coume del Mas is a different style.  Philippe described it as more classic, and more tendu, or taut, needing time in bottle, whereas Mas Cristine has a different élevage and tannins and tastes more accessible.

At Coume del Mas they do as little as possible.  There is very little disease pressure though they are obliged to treat officially twice a year.  The main problem is oidium for which they use sulphur.  Also some of the later ripening varieties are more susceptible to vers de la grappe.    Climatic conditions have never forced them to pick; they have always been able to choose their harvest date, with the harvest taking about six weeks. 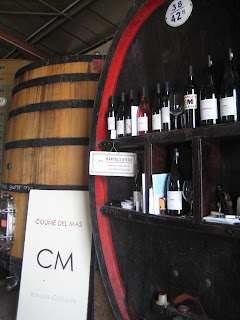 2014 Coume des Mas, Schistes  - 17.50€
Old vine Grenache Noir, from a vineyard close to the sea and a low (for Collioure) altitude of 120 metres.  It enjoys the influence of the sea, with sea breezes in the afternoon bringing some humidity.   Average yield 20 hl/ha.   They are not sure of the age of their vines, but the vineyard includes a hectare planted at a density of 10,000 vines to the hectare, and that practice stopped during the 1930s.

In vat only, on lees and bottled in June.  Elegant cherry fruit.  Kirsch.  Medium weight.  Elegant seamless and quite ready, but with ageing potential.  I liked this a lot.

2011 Coume del Mas
A hotter year, so we could taste the influence of the vintage.  Identical vineyard and vinification methods, but quite a different character, relating to earlier and later ripening grapes. More weight, but still quite fresh and quite tannic, but more alcohol on the finish.

2013 Coume del Mas
A very hot year.  Began later with a bad spring but a lovely autumn, with a hot August and September.  Some perfumed fruit, More body.  Very cherry with supple tannins and a long finish.

And the 2015 from a vat, which had not yet done its malo.  Some lovely cherry fruit, with plenty of  promise. . 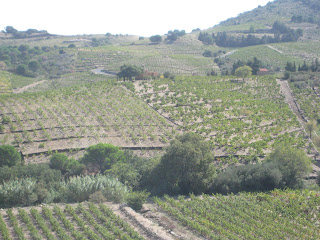 2013 Quadratur  - 25.00€
From a vineyard without any maritime influence, in a valley behind the Tour de la Madeloc, facing east.  3 hectares with 50% Grenache, 20% Carignan, and 30% Mourvèdre,which Philippe planted. They are picked separately, and spend a year in wood, before blending.

They destem, using two sorting tables, to remove anything that is imperfect.  ‘It allows us a long maceration’.  An observation that for côté  mer the vintage influence is strong, whereas the côté montagne is more regular.

2014 Quadratur
It had just been blended, but not yet bottled, and was quite firm and sturdy, with youthful, ripe fruit.  Lots of potential. 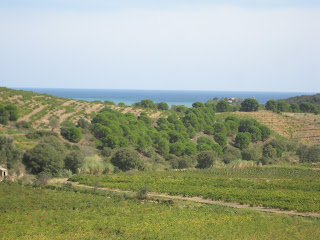 And now for Vin Doux:
2014 Banyuls Blanc Folió
South southwest facing vines.  Pick early, at the same time as Folió Collioure, but the grapes are riper.  Muted in barrique, with an élevage in barrique.  Bottle in June.   2014 a very classic vintage.  Very rounded, quite ripe and nutty.  Quite soft but with a bite and quite a hot finish.

White Banyuls does not even represent 5% of the appellation.    It was created by Vial Magnères in the 1990s and requires an élevage in barrique, but no oxidation is allowed.  There is now a distinction between reductive and oxidative Banyuls.

2013 Galateo Banyuls Rimage. – 16.00€
Sélection parcellaire.  This is a traditional rimage, and quite a complicated system.  The wine is pure Grenache Noir, aged in 225 litre barrels, which are regularly topped up, and then bottled six months after the harvest.    Rounded, ripe, rich cherries on the nose, and on the palate some lovely ripe fruit, with a tannic balance.  It really is quite a different balance from port, with a lower alcohol, 16⁰, and more refreshing, although the sugar level is similar.  Somehow Banyuls seems more harmonious than ruby port, and with a difference of extraction.

And what is the tipicity of Collioure?  Philippe thinks it is taut, tendu, closer to the terroir, with small volumes.  And we finished the visit with a very cheerful selection of cold meats and cheeses. 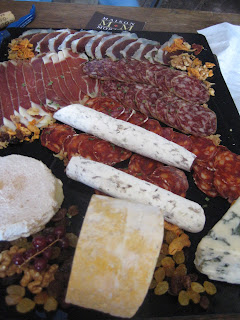