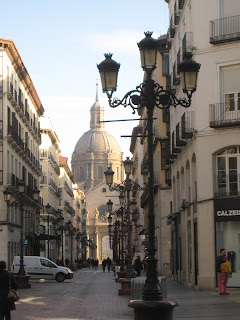 I was invited to what is now an annual tasting competition of Grenache, Grenaches du Monde.   For the previous three years it has been held in Roussillon, but this year it moved south of the Pyrenees to the region of Campo de Borja, close to the stunning city of Zaragoza.

The programme began with two winery visits on the first morning.  Unfortunately I missed out Bodegas Aragonesas as I slipped on the cellar steps, and found myself flat on my face, and in need of stitches to my eyebrow.  Not a good start, but I was recovered sufficiently to enjoy the following visit to Bodegas Borsao. 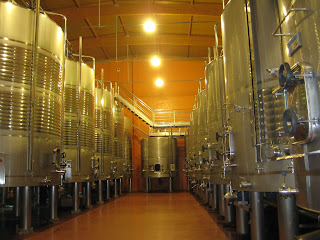 This is actually a group of three cooperatives, with 2400 hectares of vineyards, and 700 growers producing 9 million bottles.  Essentially they provided an introduction to Campo de Borja, which is a pretty unknown DO for me.  Essentially it covers the vineyards around the town of Borja, at an altitude of 300 – 900 metres.  Grenache is the most important variety, at 80%, but they also have Syrah and Merlot, as well as Viura for white wine.  The vineyards are in the Ebro valley and the dominant climatic characteristic is wind, which can blow for 200 days of the year.  And there is very little rainfall.  The cellars are streamlined.  They have a barrel hall, with 60% French oak to 40% American oak, staked four high, with humidity and temperature control.   We tasted a few wines:

2014 Seleccion
A blend of 85% Grenache. 10% Syrah and 5% Tempranillo.  Deep young colour.  Quite rich and intense. The vines are 15 – 30 years old and the wine is aged in vat rather than barriques, though I thought I smelt oak.  The fruit was very powerful, rich black cherries, with acidity and tannin. And quite alcoholic on the finish. Though it was a fairly modest 14.5⁰. 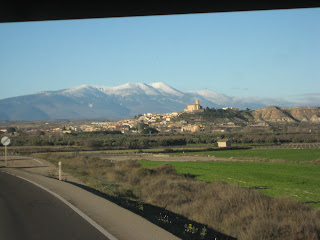 2014 Tres Picos
A pure Grenache, named after nearby snow-capped mountains, and from 65 – 75 year old vines grown at 900 metres.  The wine enjoys six months of French oak.  Deep young colour, smoky notes on the nose quite a firm oaky streak on the palate with some rich red fruit and a slightly sweet finish  and still very youthful.  15⁰.

2013 Berola
Deep young colour  - the colour comes from 20% Syrah, with 80% Grenache.  14 months in barrel.  Syrah is a relative newcomer to the region, introduced about fifteen years ago.  It has adapted well to the climate and gives colour and structure, both of which Grenache can lack.  Smokey oak on the nose, with some firm sturdy structure on the palate, balanced by ripe fruit. 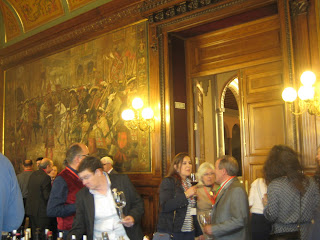 And then it was back to Zaragoza for a welcome in the Palacio de Sastiago, in a large hall decorated with murals.  There were wines to taste too, but it was all a tad chaotic and not ideal tasting conditions, but the selection gave an idea of the variety of Spanish wines with Grenache, namely Calatayud,  Somontano, Carineňa, followed by various Campo de Borja, some more elegant than others, and finishing with a nutty Maury Tuilé.

The afternoon was taken up with a conference, covering various topics, on taste; quality and choice  - we played  games with little bottles containing different aromas relating to Grenache.  There was an interesting account of the development history of Grenache.  It is one of the 16 cultivars that account for 50% of the world’s vineyards – and it has 131 synonyms.  The first written reference was possibly 1513, but a second date of 1791 is considered more reliable.   Its roots lie very much in the Iberian Peninsula, and then it moved to Roussillon and Sardinia under the kingdom of Aragon in the 15th century.   The next speaker talked about Grenache Blanc, which is a mutation of the red.  It was mentioned in Tarragona in 1875.  In recent years it has had a chequered history, with as many as 16,300 hectares in Spain in 1985, falling to 2100 in 2007, and now growing again with 2449 in 2014.   And the final speaker talked about the results of a project Terroir de la Garnacha, and about the work determining suitable soils for Grenache.  And then we finished with another tasting game, entailing three different mistella, grape juice muted with alcohol. 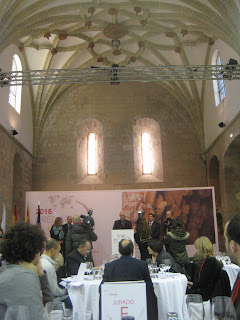 I opted for room service instead of the more formal dinner, as we had an early start the next morning and dinner in Spain is always late.  The tasting for the competition was held in the beautiful monastery of Veruela, with its fabulous Cistercian church and stunning cloisters.  The competition itself was in what was once the old refectory.  I was on a friendly table, chaired very efficiently by Emmanuel Cazes and there was Victor Jiménez, who has a wine shop La Vinicola in Barcelona and  Joaquin Gálvez who makes wine films.  Check out his website www.wineman.tv   To enter the competition, a wine needed to be a minimum of 70% Grenache.   As tastings go, it was quite leisurely, with five small flights, namely some French rosés; followed by Campo de Borja, then Cannonau di Sardegna (Cannonau being one of the many synonyms for Grenache) and then Catalayud and finally a small flight of vins doux from Roussillon, of which for me the best was Domaine Vaquer’s Solera depuis 25 ans.   I was delighted to see that she did get a gold medal for this wine. And then it was time for lunch and the opportunity to taste a few more Grenaches as the bottles came past. 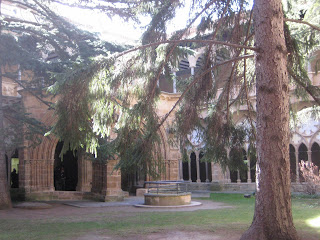 And then we were treated to a sport of tourism with a visit to the cathedral of Tarazona.  Compared to the monastery of Veruela, it was much more elaborate with baroque richness, and some elegant Moorish cloisters. And the event finished with what was termed a night of Grenache and an opportunity to taste as many wines as you wanted.   What was immediately striking was the variety of Grenache, from places as diverse as Macedonia and Australia.  Inevitably the greatest concentration came from the eastern Mediterranean, with Spain very well represented.  As far as I could see there was only one gold medal from Priorat, which surprised me, and I tasted an agreeable range of white Empordà, as well as wines from Sardinia, but also the Colli di Trasimeno near Perugia.  The Rhône Valley featured with Châteauneuf du Pape and Gigondas and there were also a couple of Corbières, from Domaine Mandourelle. 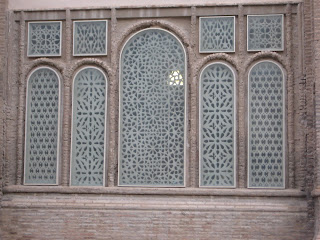 I retired before any of the results were announced, but they are available on the competition website. www.grenachesdumonde.com   On reflection the main thing that struck me about the wines I tasted was their extraordinary diversity, that Grenache Noir, Blanc and Gris and also the related Pelut, can produce an amazing variety of wine styles, through the gambit of flavours of table wines to the vins doux that are either young and fresh, or aged in barrel for years.  It is certainly a grape variety that I shall consider with new eyes. 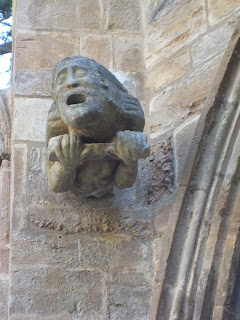