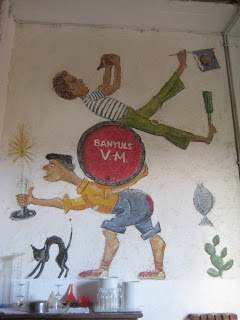 My previous visit to Domaine Vial-Saperas was with Bernard Saperas at the end of the last century.  This time I met his son, Olivier, in his spacious cellar under his house in a side street of Banyuls, with an amusing mural.

Olivier related a bit of family history, explained how his great grandfather was the first in the family to make wine.   His father came from the Ariège and observed that  ‘I make wine, like others play music’.   There was a scientific side too; Bernard Saperas was a chemical engineer and so is Olivier.  And Bernard was one of the first to produce a white Banyuls.  Olivier’s grandfather had a lot of Grenache Blanc in his vineyards, which made the wines too light in colour if it was blended with Grenache Noir, so his son vinified the white grapes separately, and in 1986 made his first vintage of a white wine, as a bit of a mistake, beginning solera of Banyuls Blanc.   And it was Olivier’s mother who initiated the fête des vendanges. 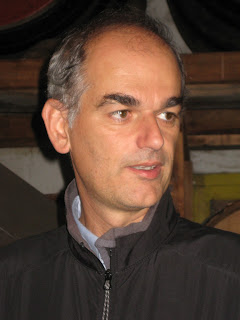 Bernard Saperas made rancio with a voile – we peered into a barrel.  There were also barrels for rancio outside, and a solera of barrels of Banyuls in the tasting room.  Olivier observed somewhat sadly that ‘the hardest thing for me will be to follow my father, with the Banyuls Blanc and other wines’.  Ithink he is doing rather well.

2013 Collioure, le Petit Couscouril  – 12.00€
The name originates from Ariegois patois, meaning stalks of sweet corn. and was his father’s nickname The blend is 90% Grenache Blanc and Gris, with Vermentino, Muscat d’Aléxandrie, Roussanne and Torbato, with a classic vinification.  A delicate nose, with a touch of fennel. Nicely understated, rounded fruit on the palate, balanced by good acidity with satisfying texture, making for quit a full palate, with a touch of bitterness on the finish.

2013 Armenn, Collioure Blanc – 17.00€
The name of a Breton lighthouse.  Olivier related a story about his great grandfather who was a light house keeper.  The same grape varieties as for le Petit Couscouril and kept in barrel for ten months.  Quite firm structured nose and palate.  Rounded and buttery with some herbal notes.  Some fennel. Some minerality and an iodé note.  The oak is well integrated.  Nice rounded finish

2012 Le Petit Couscouril, Collioure Rouge – 11.00€
Percentages vary as the  vines are co-planted. Essentially Grenache with about 30% Syrah.  A little élevage in barriques, but mainly in mainly vat.  Rounded fruit with a touch of oak.  Medium weight.  Quite easy drinking, and supple from a short maceration.  This is Collioure côté  mer. 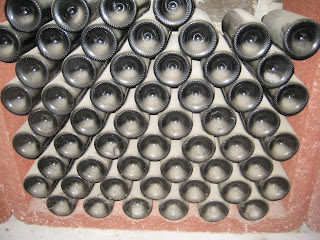 2012 Collioure les Espérades – 15.00€
Another côté mer, and the name of the vineyard recalls the sailors’ wives waiting for their husbands. ‘L’espoir et l’attente’.  This had just been bottled in September 2015.  Medium colour.  Quite a rounded nose, with some confit notes.   Medium weight palate; quite smoky with some good fruit, but still very young   The blend is the same as for Le Petit Couscouril, but with more barrel ageing, as well as in large concrete vats. 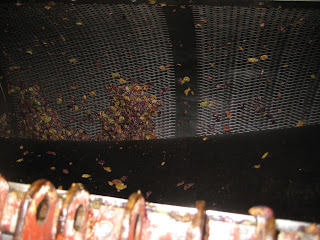 2012 Banyuls Blanc Rivage.- 19,,00€
A blend of 70% Grenache Blanc to 30% Grenache Gris.  The Grneache Blanc is picked first.  Unusually, half of Olivier’s vineyards are white varieties.  Banyuls Blanc must be bottled within 36 months of the harvest. Light golden, quite a soft and peachy nose and palate.  For Olivier it is too young to be Banyuls Blanc, which should be a cross between freshnss and confit maturity.  However, it will develop in bottle.

2004 Banyuls Grand Cru, André Magnères.  – 32.00€
Named after Olivier’s grandfather.  It is pure Grenache Noir. Grand Cru Banyuls requires a minimum of 30 months in barrel.   However, they bottled this 2004 in 2014.   They don’t make a grand cru every year; the same grapes could equally well be used for vin sec, though the grand cru usually comes from the same vineyard.     Kept in tiny barrels in the ambient temperature of the cellar.  Brick rim, and quite deep red in the middle.  Rounded palate with figs, mocha and liquorice and some dates and a hint of chocolate..   Very good balance, with a bite.  Ripe fruit as they pick at a potential of 15-16⁰, so almost overripe.  The 2015 was still being picked at the end of September.  Really a lovely old tawny with a long finish.   Olivier didn’t know his grandfather, and this particular wine was made by his father, but he rightly very proud of it.  What a treat it was.

Banyuls Blanc Rivage Ambré – 29.00€
Grenache Gris and Grenache Blanc, turning amber in colour as 20% is kept in barrel.  A mini solera of three levels.   It was begun in 1986 and the barrels have never been emptied.  Very smooth, with dry nutty fruit and a streak of tannin and acidity.  Quite powerful and intense.  I was allowed to choose a barrel at random to taste from. 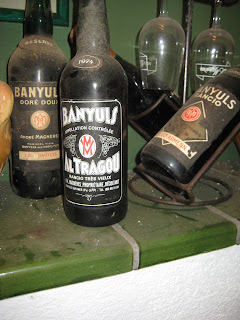 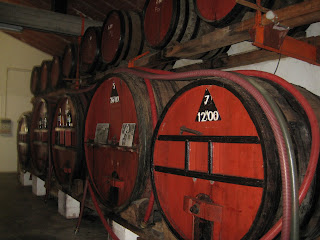