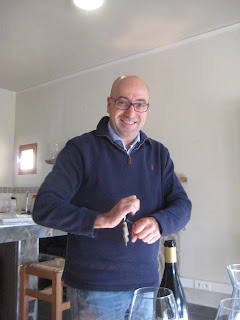 First we admired Jean Boucabeille’s new cellar, outside the village of Corneilla la Rivière.   It is partially partially underground with a visible rock face.  Altogether Jean has 28 hectares, all of which has been farmed organically, since 2008, with vineyards on the lower slopes of Força Real, so the terroir is grey schist.   Geologically Força Real is in layers, with schist on top, and vineyards going from 150 – 400 metres.

The historical heart of Jean’s estate consists of 12 hectares of vineyards at high altitude, which have been pulled up and replanted, so that the average age of Jean’s vines is now about 20 years old.  Converting to organic viticulture obliged him to replant, as mechanisation was totally impractical on the higher slopes, making it impossible to control the weeds.  He has now recreated the terraces, making them wide enough for machinery. It has been a very expensive exercise, clearing garrigues, with a lot of work by hand.   And he has another twelve hectares, also on Força Real, that face the Canigou and the village of Millas.  The soil there is deeper, with glacial erosion and lots of stones and finer schist – a terroir de grand cru observed Jean. The Canigou protects the area from the bad weather coming from Spain, but also has a cooling effect.  And on the morning of my visit, at the end of the September, you could see the first snow of the season on the peak.

Jean has replanted Syrah and also has a lot of Grenache and Mourvèdre as well as some 40 year old Carignan.  He has also planted 600 cork oaks, with the aspiration to produce his own corks in 40 years time.  Catalan cork grows very slowly, with ten to fifteen years between harvests.

Jean began working with his father, whose family came from the Aude, near Narbonne.  They were a family of vine growers, sending grapes to the cooperative and were very much involved in the growers’ unions.  Then his father, Régis, went to work in Benelux, representing the Vignerons Catalans, Sieur d’Arques and the Cellier des Templiers.  So Jean was born into that milieu, but in 1990 he realised the dream of buying his own vineyards,  but he had no cellar.  He made his wine in various coop cellars until his own was built in 2008.   His father has retired and is now a lively 80 year old, helping with the harvest. 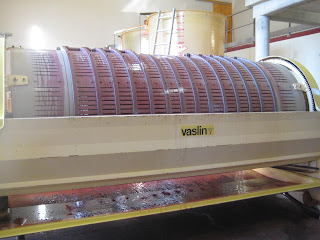 2014 Les Terrasses, Côtes du Roussillon Blanc – 8.00€
Half Grenache Blanc and half Macabeo, kept in vat.  Nicely herbal notes on both nose and palate.  Some pithy fruit and a touch peachy; fresh acidity and a slightly bitter finish.

2013 les Orris, Côtes du Roussillon Blanc– 27.00€
30% Roussanne with 70% Grenache Blanc.  The aim is a white vin de garde.  Jean had considered Chardonnay and Viognier, but realised that Roussanne would be a much better bet, so planted it about seven or eight years ago.  A little colour.  Elegantly herbal notes.  Lightly peachy.  Roussanne gives acidity and freshness. Vinified in oak and élevé for 8 months.  The oak is obvious on the palate, but there is good acidity, with the herbal notes of the garrigues, and quite a dry finish.  Youthful, with considerable potential and length.   There's a bit of bâttonage, but not too much.  Jean does not want the wine to be too fat and he wants to keep the minerality and what he called the côté tranchante of the schist.   Just four barriques make one thousand bottles. Jean selects the best barrels and blends at the last minute.

2014 Orris, Côtes du Roussillon Rouge - 27€
2014 was a good vintage, but less intense than some, making for elegance. Unusually this cuvée is dominated by Mourvèdre, which performed particularly well in 2014.  In contrast Syrah was less successful.  So the blend is 30% Syrah, 45% Mourvèdre and 25% Grenache with an élevage in fut.  Jean talked about élevage in barrel; he has 25 years experience, having started working with barrels in the 1990s.  Good young colour; youthful fresh peppery fruit.  Quite tight knit.  Dry youthful finish.  Nicely balanced.  Firm black fruit. 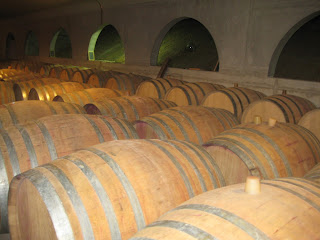 And then we continued with a splendid vertical tasting :   Orris can describe a shepherd’s house in Catalan or a capitelle, one of the stone igloo shaped shelters that you find in the vineyards.

2010 - 60% Syrah, with 40% Grenache.  The percentages changes each year, while Mourvèdre is a more recent arrival. There is quite a high proportion of Syrah, as it was particularly good in 2010, with peppery cassis fruit on the nose and palate.  Quite firm fresh black fruit; medium weight with a youthful balance.  Perfumed, elegant and long, and still with ageing potential.  However it was drinking very well.

2009  - 50% Syrah, with 30% Grenache and 20% Mourvèdre.  A very ripe year, with particularly ripe Grenache.  It could be described as typically Roussillon.  Very garrigue, and very dense on both nose and palate.  Rich and quite solid with garrigues fruit, spice and pepper.  .

2008 – The first vinification in the new cellar.  Jean observed that it was not a great year, but a balanced year., and the wine is very characteristic of the vintage.    A more restrained nose than 2009.  Quite a solid, firm palate, with quite dense tannins, which are taking longer than usual to come round.  Some attractive black fruit.

2007  - The colour is beginning to develop, with a lighter nose and a lighter palate.  The fruit was quite soft, but with a dry finish.  Red ruit, but not quite enough to balance the tannins, and showing some maturity.  For Jean this was not a great vintage; in fact it is the least successful vintage of the 2000s.

2006 - which Jean described as une année atypique pour moi.  It is not Roussillon!  There was more rain and the grapes are not so ripe, with less alcohol.  He thought it more like a Burgundy, and so for earlier drinking.  Medium colour.  Elegantly spicy nose and palate.  Quite fresh with some firm red fruit and a tannic streak. Medium weight.  I rather liked it.

2005 – The colour is beginning to evolve.  Quite firm leathery fruit on the nose.  Nice depth on palate.  A little leathery – garrigues – sous bois.  Beginning to mature and drinking very nicely.  Long and nuancé. A great vintage – in fact one of the best.   And a lovely glass of wine.

2004 – No great intensity,  but fluid and balanced.  Medium colour.  Quite a firm leathery nose with quite supple fruit on the palate, which then begins to dry a little on the finish.   It could be criticised for lacking a little depth, but none the less it is a really nice glass wine, even if it has started its descent

2003 - A hot year. Jean picked Syrah at the beginning of September, as usual.  And described the vintage as ‘ le vin qui me surprend.  Toujours, quand je le déguste’.  The colour has evolved a little and the palate has notes of leather and garrigues with depth and complexity.  A rounded palate with some elegance and quite a firm finish.  It has developed and aged beautifully.

Jean considers that there are no bad vintages, but none the less there is the  effet millésime, the vintage effect, which was beautifully illustrated in these wines.

2014 les Terrasses, Régis Boucabeille – 8.00€
Jean’s entry level red wine, with a short maceration of 12 days, compared to about 20 for Les Orris.  Half and half Grenache and Syrah, kept in vat.   Medium colour. Fresh young spice on nose and palate.  Very drinkable with liquorice and raspberry fruit. and fresh tannins. 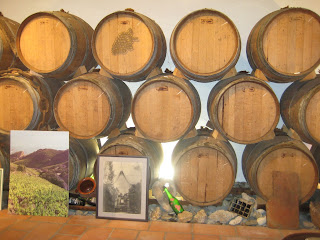 And now for Vin Doux with 2012 Rivesaltes Ambré – 17.00€
Pure Macabeo, given three years in wood.   Golden, turning to old gold.  Rounded and rich; honeyed and peachy.

2011 Rivesaltes Tuilé
Jean’s first Tuilé, Pure Grenache Noir, bottled a year ago after ageing in wood.  Rounded red fruit and spice. Pain d’épice.  A stony note.  You can see the relation with Jean’s red wines.  Quite youthful stony red fruit and an elegant finish.   In summary, a great tasting.  And a sympa encounter. 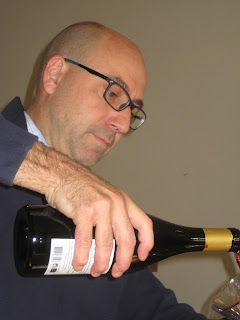 Accountant Adelaide said…
Handmade American Oak Barrels: Whiskey, Wine, Liquors
Ready to enjoy the finest spirits? Our American Oak Barrels are handmade by skilled craftsman, dedicated to the artistry and function provided by a heavy-duty oak barrel. Whether you are aging whiskey, wine, or enhancing the flavor profile of your beverage of choice, these barrels are ideal for micro breweries and home-distillers. Choose from multiple styles and sizes including Steel, Brass, Original, 1 liter to 20 liters. Sofias Findings is also able to personalize your barrel at no additional cost because we make these in-house by hand. Get your family name or business monogrammed and sip on perfection direct from the tap.