For the next few posts this blog is going to become Taste Roussillon, rather than Languedoc, following an intensive five days in Roussillon last autumn.

My week got off to a good start with a first visit on the Sunday evening at Chateau Nadal Hainaut.   This was new name to me.  The estate is at Le Soler, fairly close to Perpignan, in the area of les Aspres.  You approach it down a magnificent alleyway of plane trees, planted during the time of Napoleon III, like so many of the avenues of plane trees in France.   And at the end is a house build in the 1850s, a spacious cellar which includes a Cistercian chapel, now deconsecrated and filled with vats, and a rather comfortable gîte, where I made myself very much at home for the week. 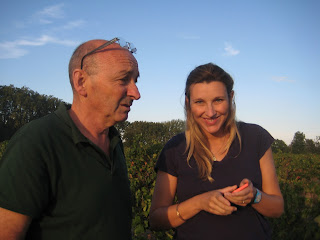 Jean-Marie Nadal explained that his is the 6th generation on the property – his grandfather  Francois Nadal married Therèse Hainaut, hence the double barrelled name.   Altogether they have 43 hectares of vines, 38 of which are farmed organically, since 2010 and certified in 2013.  Before that they practiced lutte raisonée, with Terra Vitis.   The remaining 5 hectares constitute some old Carignan that was planted in 1900.  It is very difficult to weed mechanically as the vines are an unruly sprawl with many so low that many of the branches are resting on the ground.  A tractor would be completely impossible, but there is no way that they would consider replanting the vineyard.  So the solution is a separate company that runs that particular vineyard – you should not have organic and non organic grapes vinified in the same cellar. The soil is very varied, and very stony with quartz, schist and gneiss and they have the usual Roussillon varieties, Carignan, Grenache, Macabeu, some old Syrah, both Muscat d’Aléxandrie and Muscat à petits grains, and also some Chardonnay and Cabernet Sauvignon on flatter  sandier land.  In the distance there was a wonderful view of the Canigou, the highest mountain of the Pyrenees. 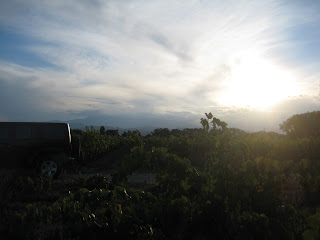 Jean-Marie was still in the middle of harvest.  He had begun with Chardonnay on 26th August, and then Muscat.   It was now the end of September.  The yields were good, an average of 35 hl/ha, with very healthy grapes.    There were hunters in the vineyards, not after wild boar, but smaller game. Jean-Marie’s grandfather installed electricity on the estate as early as 1903 and consequently they were one of the first to have a hydraulic press.   Jean-Marie was still using it in the 1970s, until he bought a Vaslin press in 1980, and now he has a pneumatic press.   There is an attractive old cellar built in the traditional narrow red bricks, called cayroux;   they are 44 cms by 22 cms and just 8 cms thick.  It is very much a traditional cellar with concrete vats and some steel tanks, not to mention barrels of various sizes. 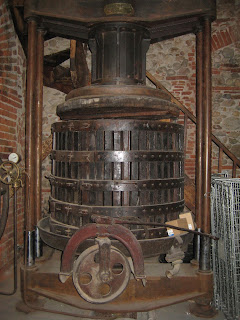 And then we settled down to taste:
2014 Muscat à petits grains, Côtes Catalanes – 5.50€
Gently pressed with a classic vinification.  The Muscat aromas leap out of the glass and the wine is very pungent, with fresh grapey fruit and good acidity, balancing some weight and structure that comes from a slightly bitter finish.
2014 Chardonnay, Côtes Catalanes  – 6.00€
Vinified in vat.  Light rounded nose and palate.  Quite delicate with a little acidity.  Pleasant drinking but no great depth.
2014 Chardonnay Prestige, Côtes Catalanes – 8.50€
Fermented in wood with a five month élevage.  Bottled in February.  Quite firm nutty buttery nose and palate, with a certain sapidity on the finish.   Jean-Marie selects the juice at pressing; essentially it is the same base as the unoaked wine.  And he makes just twelve barriques.   Quite long and quite well-integrated oak.
2014 Le Rosé, Côtes de Roussillon – 6.50€
Half and half Grenache Noir and Syrah. Pressed grapes. Quite a light orange pink.   Light raspberry nose.  Quite rounded and structured with some firm acidity.   A food rosé.
2014 Rosé Prestige, Côtes de Roussillon– 8.50€
Sealed with a glass stopper rather than a cork, making a price difference of 50 cts as opposed to 15 cts for the cork.  Mainly Syrah with a little Grenache.  A selection of grapes. The wine spends a month in new oak.  Orange pink colour.  A touch of oak on the nose and quite a solid palate with a tannic streak. Some acidity and some dry fruit.  Again very much a food rosé.
2014 la Petite Syrah, Côtes Catalanes – 5.00€
8 – 10 days on the skins.  Keep in vat.  Young vines.  Drink slightly chilled, to emphasise the fresh red fruit with a touch of pepper and a light tannic streak.
2014 Cabernet Sauvignon, Côtes Catalanes – 6.00€
3 week maceration and fermented at 22-24⁰C to retain the fruit, and bottled in the summer.  Quite a solid cassis nose.  Quite firm solid tannins; still a bit raw on the finish.  Needs a little bottle age.
2013 1900 Le Centenaire, Côtes Catalanes – 10.00€
Pure Carignan.  Classic vinification with destalked grapes.  This had no carbonic maceration, but the 2015 will, as the grapes are riper.   Two to three week maceration, with délèstages aiming for a gentle extraction.  I liked this a lot, especially as I have a soft spot for Carignan.  Ripe rounded and rich on the palate, with that attractive rustic note of Carignan.  Quite a firm nose.   A characterful palate.  Quite tannic and youthful, balanced by rich red fruit.  Ageing potential.
Jean-Marie observed that in the 1970s, the estate consisted of 80% Carignan that was vinified by carbonic maceration.  Then came the move toward Syrah, and also Cabernet Sauvignon, prompted by the demands of a more international market and so he pulled up most of his Carignan.   Fortunately he kept the now centenarian vines.
2012 Les Terres du Pilou, Côtes du Roussillon – 8.00€
70% Grenache Noir with Syrah classic vinification with élevage in cement vats.and blended after malo.   Quite a deep young colour.  Quite rounded ripe warm cherry fruit, almost sweet but balanced, with a streak of tannin. .  14⁰
2012 Terre de Quarante, Côtes du Roussillon – 10.00€
Syrah with a little Grenache.  12 months in wood and blend after élevage.  Deep colour.  Quite a sturdy nose and quite a tannic palate, chocolatey, rich and rugged.  Very dense and solid, and youthful.
2013 Terre de Quarante, Côtes du Roussillon
Same vinification for as for the 2012 vintage, but 2013 is generally considered to be a better year, more rounder, riper but also fresher, so the oak is more integrated on the nose, and likewise the tannins more fondu.  There is a streak of tannin and some acidity and plenty of ripe black fruit.
2013 Signum – 20.00€
Syrah with just a drop of Grenache.  Vinified in 400 litre barrels – taking 4 – 5 weeks -and then aged in vat for three months and bottled the following February.  2013 was the first vintage of this wine.  Very deep colour.  Chocolate oak on the nose, and palate too, with some touches of liquorice.    Ripe and intense and quite heavy at 14.5⁰, and almost sweet on the finish, with slightly intrusive alcohol.   Still very young and needs to settle down a bit more.
2014 Muscat de Rivesaltes – 9.00€
Muscat d’Aléxandrie.  Very intense orange peel fruit on nose and palate, Good acidity on the palate and slightly bitter finish.   You can almost crunch on the grapes!  An observation about Muscat, that in les Aspres, where we are, Muscat d’Aléxandrie performs well, whereas in the Agly valley, Muscat à petits grains works better.
2013 Rivesaltes Grenat – 7.00€
Pure Grenache Noir kept in vat.  Very deep colour with a ripe cherry nose, and also on the palate.  Some fresh cherry fruit, plus some figs  and a touch of spice, and also liquorice.  A streak of tannin.  Medium weight palate.
Maury and Rivesaltes use the term Grenat for young ruby wine, where Banyuls prefers Rimage, a term that no one else uses.  There is a lot of variation in Grenat, stemming from the soil variations of the region.
2001 Rivesaltes Ambré – 12.00€ for 50cls.
Muscat d’Aléxandrie kept in barrel outside for three years, and then bottled. Amber colour and a lovely nose redolent of nutty, honeyed brioche notes. Very smooth with very good acidity, long with lots of nuances and absolutely delicious.
2001 Rivesaltes Tuilé – 12.00€
Pure Grenache, given five years in barrel.  Brick colour and lightly nutty on the nose, with fruit and tannin on the palate.  The coté rancio, leathery notes, and some marzipan.  Intriguing with lots of nuances, and long.   A delicious note on which to finish. 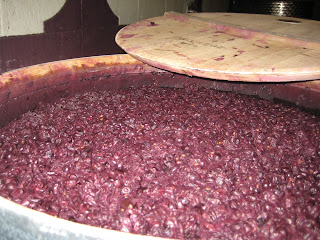