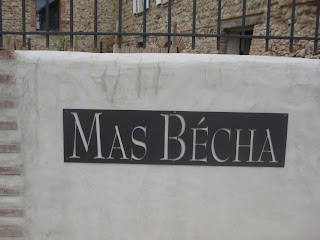 Charles Perez was en plein vendanges but he was very happy to take an hour away from his fermenting grapes to give us a tasting.   I always like going to cellars where there is something actually happening, in this instance a délèstage, with wine pouring out of one pipe to be transferred back into the vat.  Charles prefers délèstages to remontages as they are gentler.   He finds that both pigeages and remontages tend to give bitter flavours.  He wants very ripe grapes, which provide good colour, body and balance. and gives them a pre-fermentation maceration à froid for four or five days, at about 7 - 10⁰C, with one or two délèstages a day, which helps break up the cells and then the fermentation is left to reach 30⁰C.   He is very pleased with 2015; the état sanitaire is impeccable. 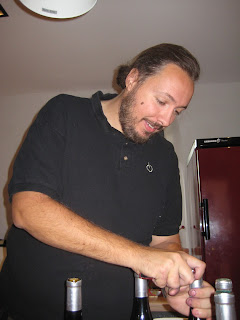 Charles has a large estate, a total of 110 hectares, of which 25 hectares are vineyards.  He initially pulled up about 75 hectares of vines, just keeping the best - half his vineyard is planted with Syrah - and there are also almond and olive trees and some cork oaks.  The area was originally one of polyculture with self-sufficient farms.  Charles has worked organically since 2009. His average yield is between 25 – 35 hl/ha, without any green harvesting.   He explained how his father bought the property in 1987, and produced wine en vrac, mainly vin doux at the time.  In 2002 Charles started working on the estate and began bottling their wine.  The name Becha is in fact a combination of Charles and his sister Béatrice, but she is not involved with the vineyard, but is an architect paysagiste.  Initially it was difficult to sell their wine. Charles worked in wine shows and salons, and then he went to China for the first time in 2005 and as a result was one of the first in Roussillon to work in Asia.  These days he sells all his wine in bottle.
The village of Nyls lies at the beginning of the hills of the Aspres, with a mosaic of vineyard soils, limestone and quartz, all very stony, with a variety of aspects, and an altitude as high as 500 metres.   The village has links with the Templers who were in the area in the 9th century. There is also a strong maritime influence as Nyls is quite close to the sea.
Essentially Charles’ cellar is a large modern shed with small fibre glass vats and larger stainless steel ones, and some barriques.  He makes red and rosé but no white at the moment and a little Vin Doux and Muscat.  However he has some white varieties, Vermentino, Grenache Blanc and Macabeo, coming into production, and on reflection he thinks it was possibly a mistake to choose Grenache Blanc; Grenache Gris would have been better.  As for reds Syrah is the dominant variety, with Mourvèdre and Grenache, but no Carignan or Cinsaut.  Nearly all his vines were planted in the 1990s, apart from some Grenache dating from the 1970s.  And by the cellar door there is a white mulberry tree which may be a cutting from a tree planted in Versailles at the time of the Revolution.
His labels, which are a challenge to photograph  - I failed miserably, as you will see - depict cartoons of each member of his family, with a different artist each year. 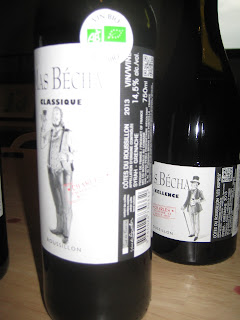 We settled down in his nicely appointed tasting room:
2013 Cotes du Roussillon, las Aspres Classique – 9.50€
60% Syrah, with 20% each of Grenache Noir and Mourvèdre.  Pre-fermentation maceration for all three varieties, but less for Mourvèdre.  Syrah is picked first; Mourvèdre last.  He blends as early as possible, before the malo, and then the wine goes into barrel.  Good colour; quite firm ripe black fruit on nose and palate.  A tannic streak balancing some rounded fruit.  Youthful tannins.  Ripe but fresh, even at 14.5⁰. 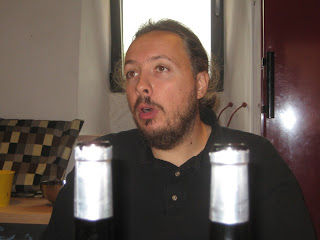 2013 Cotes du Roussillon, les Aspres, Barrique, named Serge after his father  – 12.90€
A higher percentage of Syrah as Charles uses Syrah to top up his barrels.  Deep young colour, with quite firm tannins balanced by some elegant fruit.  Black fruit and very stylish.  Charles tastes each barrel, and ages the wine according to his nose, probably twelve months for an older barrel and eight for a newer one.   He has changed coopers to Nadalié 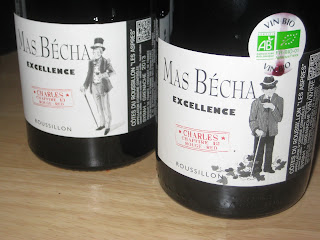 And then we turned our attention to a vertical tasting of  his cuvee Excellence, depicted by his grandfather Charles.

First off was 2007.  Quite a cool year, like 2011.  Nonetheless a heady 16⁰ but it simply didn’t taste like it.  A selection parcellaire – 80% Syrah, with 10% Grenache and 10% Mourvèdre, blended after élevage, which is six months in vat, and bottled in the June following the harvest.  Elegant fruit, with appealing spicy Syrah.  On the palate ripe black fruit.  Silky tannins.  Elegant and still youthful.  Charles talked about the importance of a selection parcellaire and commented that he tried to make as few mistakes as possible in the cellar.

2009 – a hot vintage.
Medium colour.  More solid and concentrated nose and palate, though slightly lighter in alcohol at 15⁰.  However, the tannins are less refined, riper and furrier, but with some freshness on the finish.   Charles explained that the pre-fermentation maceration lasts four to eight days, depending on the vintage.  He doesn’t work the tannins too much and wants to avoid any bitterness.   The fermentation itself takes 6 – 20 days, controlled at quite a low temperature, with a gentle start.

2010 – A fresher easier year, and a little more quantity.  Deep youthful colour.  Rich black fruit on nose and palate.  Very smooth rounded palate.  Intense ripe fruit, with the tannins nicely englobé, with a ripe finish and a note of freshness on the finish   Charles talk about microclimate.  Nyls is quite a sheltered village so the effect of the Tramontane wind is less than in some places.   The vines are planted in galets roulées with deep root systems.

2012 – We skipped 2011 as hail had affected that vintage.  This vintage is still very closed with very good potential.  A firmer tighter knit nose and palate, with notes of mint and pepper.  Very youthful with very good fruit.   And of course these wines beg the question: why no wood?   ‘It is simply not necessary’ retorted Charles, and I have to agree.   He racks during the winter when the sediment has drop and there is no fining and no cold treatment and just a light filter.

2013 – 19.90€
A finer year, more like 2007 or 2011 in style. Rich youthful nose, with some ripe cassis and on the rounded ripe fruit, both red and black fruit, with supple ,but youthful tannins..  this wine undoubtedly has a sense of place, combining modernity with fruit.

2014 – Quite elegant similar to 2012, even though 16⁰.  Charles took care not to overdo the extraction, and blended just after the vinification in November and December.  The wine went into vat until bottling in May. Quite intense black fruit.  Ripe and rounded, rich and already extraordinarily ready for drinking, but with a long life ahead.  It shows Charles’ talent as a light-handed wine maker.  And as we talked, the 2014 opened up, with more ripe fruit balanced by firm tannins, making a very harmonious glass of wine.

You sense that Charles is a very focused very motivated winemaker.  He tastes a lot and travels a lot.  He does not consider himself to be new school; and he is not ‘avec la lune et compagnie’.  He likes ripe grapes and spends a lot of time checking his vineyards and he talked about the importance of buvabilité, of drinkability and the need for finesse and ripe fruit.  And his next project is a white wine.   I shall look forward to tasting it in due course. 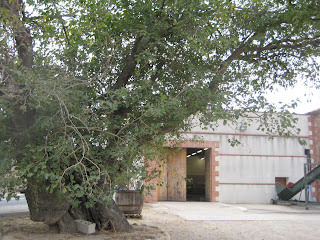