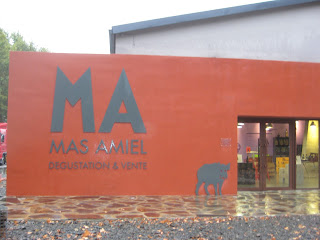 It had been a while since my last visit to Mas Amiel in Maury, so it was great to go back for an update, with Nicolas Raffy who has been the winemaker there since 2003.  He had initially done research as a bio-chemist, but changed direction to study oenology at Montpellier.  He worked at Château Montus in Madiran, before coming to Mas Amiel.

It was raining and the dramatic Maury scenery was somewhat muted.   At the end of September they still had 11 hectares left to pick, some of their higher vineyards.  They began the harvest on 26th August, and hoped to finish in a couple of days time on 30th September.   Altogether they have 152 hectares in 130 different plots.  There are 75 hectares of Grenache Noir; 18 of Syrah, 27 of Carignan and the rest are white varieties.  The average age of their vines is 40 years old.  The soil is the grey schist of Maury and there is also some red limestone. The average yield about 23 hl/ha; in 2014 it went as high as 27 hl/ha and can be as low as 12 hl/ha.  All the vineyards are organic.  In 2000 they experimented with biodynamics, but stopped in 2004 and have stayed organic.  And sadly it was not the day for a walk in the vines. 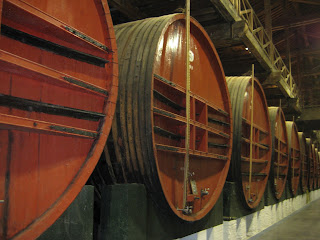 When I very first went to Mas Amiel, I met the previous owner, Charles Dupuy, but since 1997 it has been the property of Olivier Ducelle, who also owns estates in Bordeaux, Châteaux Jean Faure in St. Emilion, Haut Maurac in the Medoc and Haut Balet in Fronsac, as well as 6 hectares of Savigny les Beaune and Marsannay.  He also has a négociant business dealing in about 20 Burgundy crus.

At Mas Amiel they still use the enormous foudres that I remembered from my very first visit.  They are ‘notre patrimoine’ observed Nicolas.  Mas Amiel is known for its Vin Doux and there is no doubt that the mature Vin Doux opens doors for them.  These days half their production is vin doux, and the other half table wine, or vin sec.  The cellar was built in 1890 and the old foudres would have been constructed in situ. There are 17 of them, 350 hectolitres beasts. 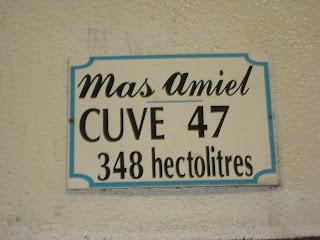 And then we looked at the more modern part of the cellar, with a forest of stainless steel vats.  They have inverted tronconique  stainless vats, which open up the chapeau of marc, diminishing its thickness.   They also make it easier to do mutage, it is more homogeneous – and délèstage is easier too.   And then there are concrete vats with a square base and tapered top, which apparently helps combat any reduction in the wine.   Mas Amiel is on schist, which can encourage reductive notes, especially for more fragile grape varieties.  The porosity of the cement helps stabilise tannins and colour.   They work without pumps. . 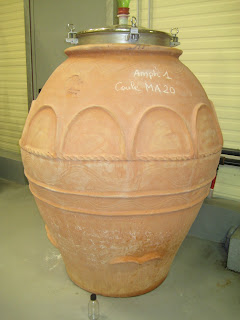 There are eggs which are good for their permanent micro-convection, you might call it a permanent microbullage.   And there is a demi-muid en concrete, as they like the shape but did not want the oak impact, as they want to emphasise minerality, which can be less obvious with oak.  They have had amphora for two years, as they wanted small containers, and also have some tiny concrete vats.  They prefer these to the larger containers; the temperature stays more stable – as Nicolas put it there is ‘plus de verité de fruit et de terroir.’  He tasted his first amphora wine with Yves Leccia in Corsica and really struck by the difference in fruit and minerality and tension.  There is a little basket press for small quantities, and also some more modest sized foudres

They make a varied range of wines, Vertigo is a range for younger vines; Origine is their Côtes du Roussillon Villages and they have several single plots for various different cuvées.   There is Maury, and Côtes du Roussillon, as well as vins de pays, and then of course the various selections of vin doux, both fresh and oxidative. 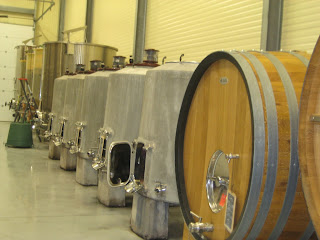 So this is what I tasted, in their spacious shop with a long tasting counter..

2013 Origine, Côtes du Roussillon Villages – 26.50€
From foudre.  It will be bottled in May 2016 and sold in two years time.   One third each Grenache Noir, Syrah and Carignan.  Blended after malo.  Deep young colour.  Quite elegant black fruit on the nose.  Lovely ripe fleshy fruit on the palate.  Quite  rounded, with lovely spicy fruit and elegant tannins.   Some body, but not heavy.  Nicolas thought it very representative of the Mas Amiel, calling it ‘sudiste, solaire’.

2012 Altaïr, Côtes du Roussillon Blanc. – 20.00€
Altaïr is a constellation.  In  stainless steel and also an egg and a demi-muid until the May following the harvest. 75% Grenache Gris, from 70 year old vines, with 15% Macabeo and 10% Grenache Blanc.  The blend is according to the components of the plot.  No malo.  For Nicolas, Grenache Gris is ‘revelatoire of the terroir,; it provides tension, and a light touch of tannin, makes the wine tendu.  A little colour.  Quite a firm nose.  Firms structured palate.  A peachy note from the Grenache Gris.  Firm structured, long mineral.  Very tight knit.  Very youthful but with ageing potential.

For Nicolas the signature of Mas Amiel is wine that is not immediately exuberant but develops in the glass. 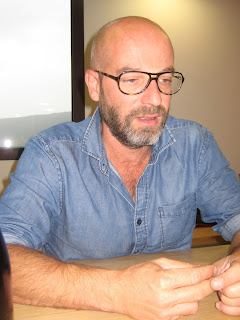 2014 Maury Sec, Vers le Nord – 26.00€
Grenache Noir 92% with Syrah.  From a single vineyard, la Devèze, which is south east facing, schist with a vein of red clay.   Classic vinification. About one third is not destemmed, providing the stalks are ripe, as they provide structure.  In vat for twelve months.  Bottled 4th September 2015.  Deep young colour.  Some red and black fruit.  .  Very fresh.  Elegant red and black fruit and spice.   An observation that 2014 will be a better vintage than 2013.

2014 Alt 433M, Maury Sec – 26.00€
Half Grenache Noir, half Lledoner Pelut; co-planted .  From a south east facing vineyard of mica schist and granite at an altitude of 433 metres, their highest vineyard, with 60 year old vines.   Only in vat, in order to retain the fruit.   A lighter colour than Vers le Nord.  A firm nose.   And on the palate more floral and spicy, with a hint of cherry.  A structured palate.  Youthful and elegant.   For Nicolas it is atypical, more like a Gamay or a Pinot Noir.  And very surprising.

2013 Vol de Nuit, Côtes Catalanes – 32.00€
The name refers to the St. Exupéry story that Anne Ducelle was reading when they were choosing a name for this cuvee, and relates to the idea of a journey, with some mystery. 3 plots of old Carignan, one planted in 1900 and two in 1925, at an altitude of 140 – 240 metres.  Half in an oval foudre, and half in a stainless steel vat.  Bottled September 2014.   Very deep colour.  An explosion of fruit, black cherry and spice.   Some peppery fruit too..  An elegant but rustic note and some firm tannins and acidity.  Very youthful.  Needs at least five years.  The first  vintage of this cuvée was 2010.  Nicolas talked about Carignan.  ‘It is a variety that is close to my heart’.  Carignan can be reductive in its youth, and it can be difficult to control the aeration, giving tanals, or notes of old apple - this was a new one for me.  .

Nicolas observed how taste in Roussillon has evolved, with a move towards drinkability, so that the wines are lighter, and especially compared to Château Montus, which was very structured.   Nicolas wants ripe grapes, but also wants to avoid over extraction, so he uses less wood, less barriques and works much less on the fermentation.

For Nicolas, the tipicity of Maury is based on schist, which gives fresh minerality.  In contrast Collioure is not as fresh.   He talked about the philosophy of the estate.  It has been producing wine since 1816, so they have experience and savoir faire, and there is ‘une âme dans la maison’..  They know their strengths and their weaknesses, their good and their bad plots.

There are now 30 wine growers in Maury, and they are the second biggest producer, after the coop, representing 15% of the production of Maury. .

40 year old Maury – 67.00€
Again, pure Grenache Noir.  More a tawny brick colour.  Drier, more mature.  Very elegant.  Lots of nuances.  90 gms/l sugar and also for the 20 year old.  Oxidation gives length, while the sugar stays the same, but the perception changes.  One year outside in bonbons and then in foudres.

1969 Maury
It was still in foudres when Olivier Ducelle bought the estate.  Very intense, with very firm dry figs. Elegant fruit.  Dry orange and figs.  Very intense and long.  And absolutely delicious!
And what about future projects?  ‘To refine what they have today, to progress and fine tune’.   I would anticipate more than that.  This is an estate that is going places.  Watch that space! 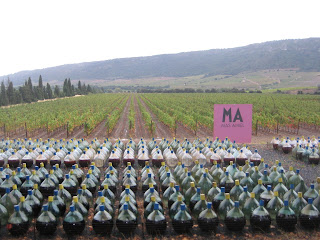