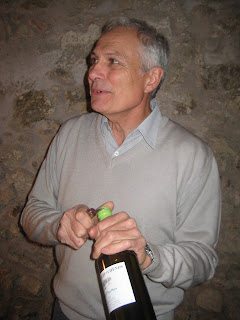 A lovely tasting with Alain Razungles, who I had first met at the Salon des Vignerons Independents in Paris a few years ago.

For Alain, Roussillon is the most complicated of terroirs, it has everything except volcanic rock.  He talked about Vingrau where his vineyards and cellar are.  There are a lot of galets roulées, and the soil is dominated by clay and limestone.  It is very stony, thanks to éboulis calcaires from the nearby cliffs.  There is marl impermeable, and lots of springs, fed by the water table, so that Vingrau fears drought less than some areas.

Alain’s great grandfather bought Domaine des Chênes in 1919; it was already a wine estate, winning a medal in 1912.   In the next generation one of the three sons was his grandfather, and then his uncle and father continued, but there was no room for Alain on the estate so he studied agriculture and oenology and became a professor at Montpellier, and then took over the 35 hectare estate when his father retired. Until he retires himself in two years time, he has two careers, as a vigneron and as a  professor.  We caught up with him while he was in Vingrau for a short afternoon.  And he has three daughters, one of whom is interested in wine.

Alain talked about two particularities of style of Roussillon, of the whites with a wonderful freshness, and the côté tannique of the reds, with the clay and limestone soil making them vins de garde.   Vingrau has clay and limestone in the valley, and is surrounded by cliffs.  Part of the vineyard is on grès, or sandstone, which is the parent of schist.  However, those wines are quite different.  Alain has a lot of Grenache on the sandstone, but it does not suit Syrah which needs deeper soil.

Vingrau is part of the cru of Tautavel; they called it Tautavel as the name was already well-known for prehistoric man.   He was found by the curé of Vingrau at the end of the 1960s.  Alain enthused about the quality of the terroir: ‘tout est bon, comme dans le cochon’.  The altitude goes from 110 to 400 metres.  The cliffs provided shade so some vineyards do not get the sun until 10 a.m.  Some of the vineyards for the white varieties are north-facing, so only enjoy short periods of sunshine.  And Tautavel also enjoys the influence of the river Verdouble, a tributary of the Agly. And there is some schist in vineyards closer to Maury.  It makes for wonderful blending possibilities.

Syrah is mad; c’est une folle, and grows non-stop, even in a drought.  It needs to be controlled.  And Alain is pleased with 2015 – he called it une jolie millésime, with a good quantity of Grenache.  He began his harvest on 22nd August, with the first whites and he makes white wines for ageing, and in that context enthused about Alsace,  and about Hugel in particular.

2012 les Olivettes, Côtes Catalanes, 7.50€
Muscat and Macabeo.  The aim is a simple wine, with quite a firm Muscat nose.  There was a bitter note and some firm acidity, with quite fresh fruit.  Macabeo works best with Muscat.  There are floral notes, with some lemony herbal hints.  No malo.  To do a malo here would be to tirer une balle dans le pied or shoot yourself in the foot.  Northern France does malo as it needs to lower the acidity; but he does not consider that there is any benefit to the aroma.  We need acidity.  Very youthful for 2012.

Alain talked of the trend in the 1980s when 'people  tried to get us to lower yields', but they went too far, especially economically speaking.  These days the average is 25 / 28 hl/ha for old vines, and red wines, and 35 hl/ha for whites, and rising to 50 – 55 hl/h for young vines.  An aside about the wld boar and angels eating everything. one in the vineyard, the other in the cellar!

2012 les Sorbiers, Vieilles Vignes, Côtes du Roussillon. 9.90€
Forty years old plus.  Grenache Gris and Blanc planted together with selection massale, and Macabeo    Élevage in old wood, but not fermented in wood.  Bâtonnage in vat.  Nice weight.  Very good acidity. Good mouth feel; the lees give gras and stabilise the wine.  Some biscuity oaky notes, and still quite youthful.  Six years is the optimum ageing for this wine, Alain thought.

He was the first to plant Roussanne in Roussillon in 1981.  It was a defining moment for Roussillon when they were allowed to plant Vermentino. Roussanne and Marsanne.  Vermentino gives acidity, Marsanne quantity and Roussanne he remembered tasting with ‘ le grandpère Jaboulet’ at the end of 1980s, which inspired him.

2013 les Magdaléniens, Côtes du Roussillon
Grenache Gris and Blanc from les Sorbiers vineyard and Roussanne. Fermented and élevé in wood.  Quite a golden colour and richer than les Sorbiers.  White flowers.  Fresh, almost saline and sapid with some weight.  A fond de fraicheur and vivacity.      When he planted the vineyard 30 years ago, he found a large number of fossils and weapons, arrow points and so on, at the geological level of the Magdaléniens, dating from 30,000 years ago, so the planting was delayed for a year and when he came to look for a name for his wine, the choice was obvious.

2011 Les Grands Mers, Côtes du Roussillon Villages, Vieilles Vignes – ie 50 years old.  8.50€
Includes a lot of Carignan, as well Grenache and a little Syrah.  In vat, and carbonic maceration for the Grenache.  Quite rounded and supple, with a youthful tannic edge.   Good fruit.  Quite dry on the finish, as still very young and still with ageing potential.  A touch of liquorice.

2011 le Mascarou, Côtes du Roussillon Villages, Tautavel – 10.70€
A vineyard at the bottom of the circle of Vingrau.  A blend of one third each of Carignan, Grenache and Syrah.   He does not blend immediately; it is a gradual process.  Some Syrah and Grenache go into wood, and also the pressed wine, while Carignan stays in vat.  Quite rich and intense.  A mouthful of ripe fruit with some firm tannins.   Very youth, with black olives.  The Syrah gives black olives, laurel, and there is liquorice too.  The old barrels add rounded  tannins, but he does not believe in micro-oxygenation.  It ages the wine too quickly; and it is the same if wine is kept in wood too long.

2009 La Carissa – lieu dit.  Côtes du Roussillon Villages – 19.70€
40% each of Syrah and Grenache ; 10% each of Carignan and Mourvèdre.  All élevage in wood, for 12 -14 months.   One fifth new barrels, and then into vat, where it stays for a while.   Alain likes mature wine.  Twenty day cuvaison with pigeages and remontages, but no fining.  Quite rich with tapenade and black fruit.  Quite firm tannins.  Quite a drying finish.  Quite spicy quite fleshy, but with a dry notes on the finish.

2011 Muscat de Rivesaltes – 10.80€
Rounded and honeyed with a slightly bitter finish.  Not too aromatic; clay and limestone does not make for a lot of aroma, Alain observed.  Pure Muscat à petits grains.  No skin contact.  Pressed immediately so muted on juice.  110gms/l residual sugar

2006 Tuilé, Rivesaltes  - 14.70€
Grenache Noir with 10 – 15% Grenache Gris.  Quite a deep red colour with a brick rim.  Quite rounded, quite dense and quite firm.  Prunes and sweet fruit. Mutage sur grains.  Quite a sweet finish, with a spirity note.   Figs, liquorice, fruit confit.  Lots of nuances.  ‘You mustn’t think you are drinking sugar’.  It will last a life time, and still tasted very young.,

There are four families of flavour, namely fresh fruit; confit fruit, chocolate torrefaction, and rancio.  A good tuilé needs three out of the four – this is not yet rancio. And the rancio note must not dominate.   Very Grenache on the finish, with rosemary, garrigues, thyme.

2005 Rivesaltes Ambré – 15.00€
Amber colour.  Quite deep.  A touch of green on the rim.  Alain said that he learnt how to make wine like this in Portugal.  Very rounded and balanced.  Long ripe nutty fruit.  In wood, but not too long.  Grenache and Macabeo and 5 – 10% Muscat.

Muscats are now being aged.   At one time there was nothing between a cheap one litre bottle of Muscat or a type of rancio, but now new styles have developed with mutage in barriques and all kinds of élevage and other variations.  Tuilé takes four to five years to age, and likewise Ambré.

1999 Rancio Sec L’Oublie, Côtes Catalanes  - 15,00€ for 50cls.
Pure Macabeo.  The barrel was quite literally forgotten, left in the courtyard.  No voile.  A firm nutty austere nose, very dry almost like old oloroso and very severe. Very good acidity. 6 hectolitres of Macabeo reduced to 5 hectolitres over five years.   Very first vintage of this was 1990, which was sold in 1995, and is now part of Alain’s repertoire. 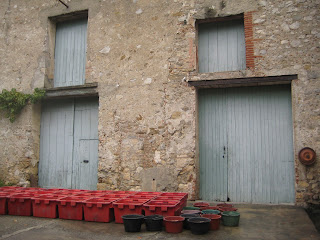 charlie said…
Any comments on the large differences in price levels between some of these estates?
24 February 2016 at 12:22

Zzzz said…
I've generally found the whites of Vingrau much more exciting than the reds. Do you often find that to be the case? Also, if you were bopping around that village, any opinion on Le Clos des Fées? I definitely have mine...

Rosemary George MW said…
Charlie - Re prices, some have grander ideas -and think their wines worth more, or produce less. It is a question of what the consumer will pay.

And Miquel - the white wines really excited me, all over Roussillon. In away the surprise of my trip. And Clos des Fees is coming up next.
25 February 2016 at 17:16