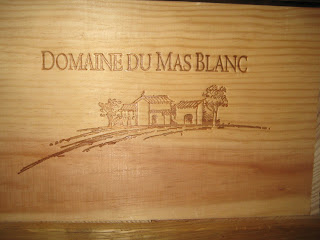 I first visited this estate  in the late 1980s, with André Parcé, and have been back a couple of times since, and this time met his son, Jean-Michel.  The cellars are right in the centre of Banyuls, close to the sea front.  They are part of the labyrinth of cellars in the town, and have a rather old-fashioned atmosphere, despite some new stainless steel vats.  There are old fûts stored in an oxaline system; Jean-Michel buys a few new barrels each year, and uses them for white wine, but does not want any oak taste in his red wine.

His vineyards comprise 15 hectares, with a balance of two thirds dry wine to one third sweet; 20 years ago it was the opposite.   And he was generally pleased with 2015.  We began by tasting a few tank samples of wines that have barely finished fermenting.  They promised well to my inexpert palate, but tasting wine that is barely a week old is definitely not my field of expertise.

Jean-Michel gave me a bit of family history.  The Parcé family go back to the 1600s.  His great grand-father was a painter; his grandfather, father and brother were doctors – his father had a medical laboratory and Jean-Michel became a wine grower. He recognises Lucien Peyraud, the founder of Bandol and Domaine Tempier, as his spiritual father for it was Lucien who kindled his enthusiasm for Mourvèdre.   And it was Jean-Michel’s father, André, who created the reputation of Collioure, while is grandmother developed Banyuls vinegar. 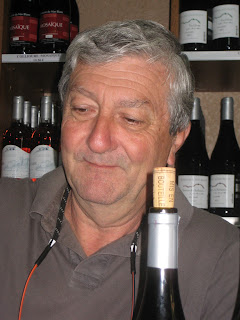 We tasted in a rather old fashioned tasting room.

2014 Signature Colline – 13.50€
Mainly élevage in vat, with a touch of wood.  A touch of oak on the nose; quite a bitter finish, but lots nuances from the different varieies.  The blend, as the two hectare vineyard is planted, is 40% Grenache Blanc, 30% Grenache Gris, with 10% each of Marsanne, Roussanne and Torbat, or Malvoisie.  Jean-Michel grafted Marsanne onto Grenache when an appellation for white Collioure was first being considered.   That appellation was recognised in 2002.  He observed that people need to look for the best sites for white wine, in other words, vineyards at altitude, and east facing and on sandstone, grès. He thinks that Roussanne has great potential

2013 Terres de Schistes, Collioure – 9.50€
70% Grenache, with 15% each of Syrah and Mourvèdre.  From lower vineyards of schist and gravel.  Very mineral; tight knit. Elegant fruit  Élevage in vat.  An elegant balance of fruit, minerality and tannin and a long elegant finish.

2013 La Llose, Collioure – 10.50€
From higher vineyards, making for more complexity in the wine.   50% Grenache with 25% each Syrah and Mourvèdre.  Structured, firmer fruit, more peppery, torrefié, and more elegant.  No wood and an elegant finish.  Needs time.  Lauze in Occitan means sheets of schist., and the vineyard does indeed comprise flat stones, or leaves of schist.

2012 Cosprons Levants, Collioure – 19.50€
The name of the vineyard.  60% Syrah, 30% Mourvèdre and 10% Grenache, aged in wood for 12 months.  Deep colour.  When they blend, varies.  If all the grapes are ripe at the same time, Jean-Michel will fermented then all together, or if not, he will pick them separately and blend before ageing.  Quite a solid mouthful.  Firm fruit; peppery notes from the Syrah,  More  tannins; quite fleshy.  A youthful balance, will age, Red fruit, some stony notes  Quite fleshy but elegantly so, and long.

2012 Clos du  Moulin, Collioure  – 24.50€
With 90% Mourvèdre and some Counoise, this is a homage, a thank you to Lucien Peyraud,  and Collioure’s answer to Bandol.  Aged in fut. Quite a deep colour.  Quite firm nose, tight knit red fruit.  rounded fruit, quite firm tannins, elegant and tight knit and more structured than the wines with a higher proportion of Grenache. 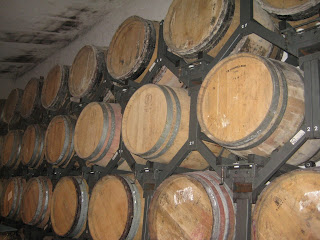 And then on to the Vin Doux.

2014 Banyuls Blanc – 14.50€
Light colour.  A touch of white flowers of the nose   Fresh orange notes on the palate. Quite rounded with a firm note on the finish, and also some alcohol  - 17⁰.  Muted juice, rather than sur grains for the white Vin Doux. A blend of Grenache Blanc, Grenache Gris, Torbat and just a splash of Muscat d’Aléxandrie.  The blend for Banyuls Blanc can vary quite considerably.  Jean-Michel decried Grenache Blanc as water; Gris is much better and Torbat is underrated, but hardly anyone has it.

2012 Collita, Banyuls  – 15.50€ – 17.5⁰
Spicy red fruit.  Medium weight, fresh rounded and ripe.  Alcohol, tannin and fruit.  Jean-Michel talked of their three styles of young red Banyuls.  There is Le Mas Blanc Fruité, when the juice spends just a week on the skins.  Collita is given two or three weeks more maceration and is less rounded than Rimage, while Rimage spends five weeks on the skins.  All are muté sur grains.

2000 Banyuls Vieilles Vignes  --31.50€
The vines are 35 years old, and the wine has been kept in 350 hls foudres, without any topping up, and was bottled eighteen months ago.  Jean-Michel keeps back 250 litres to sell as Collection Vintage, and has wine from 1945 to 1969 to sell.  He talked about the notion of grand cru.  A cru should have the name of the vineyard, and he doesn’t use grand cru, which is a category of Banyuls, entailing 75% Grenache and 3 years in small wood, with mutage on the skins. This Vieilles Vignes has a brick rim and was rounded and  smooth with notes of fig, liquorice and spice,  with rounded sweet spice and great length.  What a delicious note on which to finish.   A classic Banyuls. 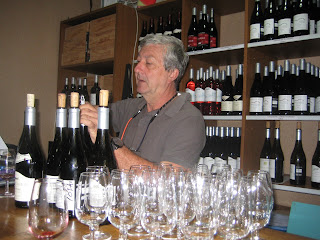