The Wines and Winemakers of Languedoc-Roussillon by Peter Gorley 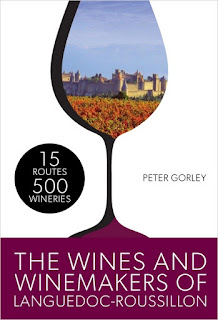 My good friend Peter Gorley has been a close follower of wine in the Languedoc several years and he has just published new eBook edition of The Wines and Winemakers of Languedoc-Roussillon.   Essentially he has produced fifteen wine routes covering the whole of the Languedoc as well as Roussillon.  These are preceded by a brief introduction to the region, including the significant changes since his 2002 guide, such as the Millau Viaduct and the Newcomers.  The routes go as far east as Uzès and the Pont du Gard, and manage to cover all the main areas of the Languedoc, as well as more off the beaten tracks places,  taking in the Pic St. Loup,  St Chinian, La Clape, Corbières both north and south and Roussillon, again both north and south.

Not surprisingly, as it is my home patch, I paid particular attention to the chapter on Pézenas, Caux, Agde and Mèze.  Peter provides thumbnail sketches of virtually all the principal producers of the area, some in more detail than others, along with website address and telephone numbers. In some instances there are tasting notes, or just a simple pointer of what to look for.  And there are some friendly personal touches – Biscuit, Anne Germa de Sutra’s donkey at Monplézy gets a mention; sometimes there is a bit of history.  I did not know that la Croix Belle has been in the Boyer family for three centuries.

It is nicely opinionated, so that you know when Peter likes the wine. Writing about the wonderfully historical Château de Perdiguier, he finish by saying:  Visit the castle, buy the wines!  And of Domaine Verena Wyss:   Verena makes two of the best Viogniers I’ve tasted.  What more can you say?  And I was pleased to see that he had covered most of my favourite Faugères producers, some in more detail than others.   And the text is illustrated with photographs that show the Languedoc scenery at its finest, as well as some dramatic interpretations from Peter’s wife, the artist Elizabeth Hannaford.

My one quibble is that some of the entries are now out of date – and Peter readily admits this in an introductory caveat, for that is the problem of taking eight years to write a book, during which he has covered an enormous area in some considerable detail.  The trouble is of course is that you do not know what is out of date.   And I can’t see any way around that.   Suffice it to say, I have greatly enjoyed dipping in, and finding wine estates that I did not know and entries about them that inspire me to visit.  So I would suggest that this is an essential addition to the library of anyone with any enthusiasm for the wines of the Languedoc.    And it can be bought from two websites:

Kevin Hakney said…
Thanks for taking the time to discuss this, would you mind updating your blog with more information? It is extremely helpful for me.