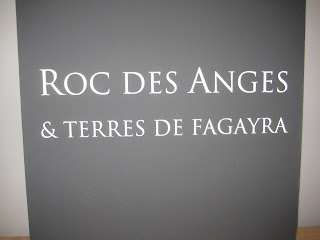 I had been wanting to visit Roc des Anges for a while now, after tasting Marjorie and Stéphane’s wines at various events in both France and London, and I was not disappointed.   They now have a smart new cellar close to the village of Latour de France, so we admired lots of concrete vats of various sizes,  to accommodate their numerous different parcels of vines.  Altogether they have about 100 plots in just 35 hectares.  60 ares is a big plot for them.  Virtually all their vines are in Montner, with a few in Tautavel and also close to Calce; the vines by their cellar are not theirs.  Montner has very poor schist soil; and yields are low.  And they also have a vineyard in Tautavel, Terres de Fagayra, for Maury,

We talked about their vinification methods, they try to leave the berries as in tact as possible, while removing the stems, so they use an egrenoir, which drains, as opposed to an egrappoir.  Carbonic maceration starts inside the berries, making for more précoce, earlier drinking wines.  This is something they have done since 2008.

There is an extensive underground barrel cellar which Marjorie observed was a significant part of the cost of the building. However the amount of ouillage has been significantly reduced.  2011 was the first vintage in this cellar. 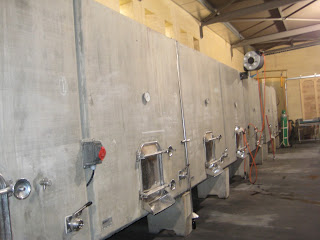 They have Grenache Gris, Macabeo which have been replanted by massale selection, as well as Carignan Gris, Carignan Blanc and Grenache Blanc, and for reds, Carignan Noir, which they have also replanted, and also Grenache Noir and Syrah, as well as a little Cinsaut which they planted in 2015.  Marjorie thinks that Cinsaut may give them more elegance, and they are certainly moving towards more finesse; The soil here gives elegance’.  She admitted that they would not replant Syrah; ‘the truly Mediterranean varieties work best'.  Ninety percent of their vineyards are on grey schist, with a little limestone, as well as granite and some galets roulées.   Their highest vines are at 300 metres and north facing, and closer to the mountains than to the sea, so that they enjoy the effect of cool air, but no maritime influence. The average age is 65, but a lot have been replanted.    They have been certified organic since 2010, and have worked biodynamically since 2011.  It has been a long process of adaptation; the vines suffered initially.

They created the estate in 2001, when Marjorie graduated from Montpellier at the age of 23.  She had met Stephane who then got a job working at Mas Amiel, so looking for vines in Roussillon was the obvious decision, even though she comes from the northern Rhone.   Côte Rôtie would have been much more expensive; 'but here in Roussillon everything is possible. And the schist is the same as in Côte Rôtie,  but the climate is different'. 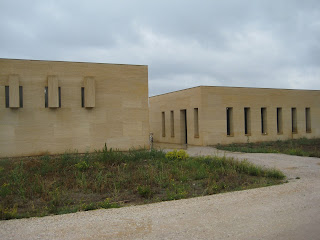 The harvest in 2015 was going well.  They began on 10th August with Grenache Gris and finished on 26th September, a full seven weeks, with various pauses, all handpicked.  They are always the first to pick their whites.

We are settled down to taste in their comfortable tasting room:

2014 Llum – 18.50€
Meaning light in Catalan.  A blend of 13 different plots.  Grenache Gris, Blanc and Macabeo.  80% are old vines, meaning 40 years or more.   Marjorie observed that you see a change in the profile of the grapes when the vines are about 40 years old.   The soil is poor so the roots take time to grow deep.  The roots are tortuous with a long chemin de seve, a path of sap.  2014 is a complete contrast to 2015.  It was not a hot year.  They decide their picking date by tasting the grapes.  Acidity is not important.  The ph is low, indicating real freshness; that is the crucial thing.

And the wine had a  little colour, with a delicate herbal nose.  There was fresh firm acidity on the palate.  It was youthful and tight knit, with almost green note.

The wine is fermented in wood, mostly old wood, with just 5% new wood, and stays in wood for nine months.  They buy old barrels from Burgundy.  The oak in nicely integrated and the wine concentrated but not heavy.  They bottle early.  In  Burgundian terms, this is their village wine. 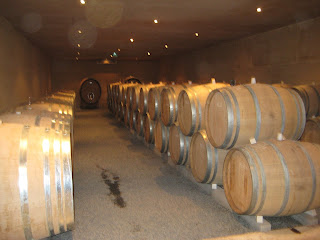 2014 Iglesia Veila, Côtes Catalanes – 36.00€
One plot, meaning Old Church – their ‘grand cru’.  From Grenache Gris planted in 1954.  All their white grapes are vinified in the same way so they can see the different nuances.  The character of the vintage decides the length of cuvaison.  The oak was more apparent, making for a youthful tight knit wine, with firm acidity, and structure.  It was more powerful but not heavy, and it will take longer to be ready for drinking.

2014 l’Oca – 36.00€
Meaning oie or goose.  The vineyard is in the shape of a goose on the cadastre.  From Macabeo planted in 1957.  A little red clay, as well the schist.  The red clay makes it quite ferrique.   Light golden; more rounded with lots of nuances.  Very good acidity; textured, a little fuller, elegant and restrained.

Marjorie observed that their wines do not necessarily do very well in blind tastings; they reveal themselves à table.  And commenting on Macabeo, she observed that it is more delicate than Grenache Gris, with an aromatic purity.  It can be quite neutral.  You need to pick it at the right moment, not too late nor too early.  It really talks of the soil, with very little varietal aroma.   Grenache Gris has more personality.  It is easier to tell when to pick.  It has structure and minerality; ‘it‘s a great variety.  We like it a lot.  Macabeo is more delicate, whereas Grenache Gris is more forgiving of mistakes’.

2014 Segna de Cor = Roc des Anges backwards.  Côtes du Roussillon Villages.  14.00€
A blend of their youngest vines, that is, less than 40 years old. Lots of Grenache, with some Syrah, Carignan and Mourvèdre.  The wine develop quicker and is quite different from the old vines.   Kept in a cement vat and bottled in June.  It has lovely spicy cherry fruit.  Medium weight with a certain freshness.  'Very 2014', observed Marjorie.   The grapes were very large, but there was nothing in them- they were maigre, nothing dans le ventre, but the wine has turned out very well, with some elegant cherry fruit and a streak of tannin.  Some blending in vat and before élevage, and final blend before bottling; it’s a gradual process.  Some vats of whole bunches add extra nuances; the carbon dioxide comes of its own accord and the grapes are neither destalked nor crushed, so that you have an inter-cellular fermentation, as you do in Beaujolais. 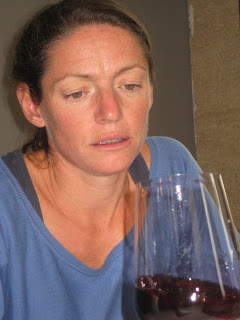 A blend of old plots, Carignan is the dominant variety, with some Syrah and Grenache, kept in both cement and foudres, and then in bottle for 6 months before sale.  Montner is very vallonné with lots of different aspects and relief. Good young colour.   More substance than Segna de Cor.  Rounded and ripe; more nuances with ampleur, but not heavy.  Spicy cherry fruit.  Quite structured.  Se revele avec l’air; or develops in the glass.

We talked the flavours and trends of Roussillon.  Everyone is now looking for freshness and drinkability since the last ten years.  However, some areas are better when the grapes are riper.   There are two currents or styles, the oaky concentrated powerful wines, possibly fuelled by the Wine Advocate, and the more elegant wines.  Vineyards in Roussillon are influenced either by the mountains or by the sea.  The other trend is the improvement in quality; 'we are not standing still, and we are avoiding excessive extraction and wood, and learning to maitrise terroir and concentrate on finesse'.  Marjorie’s wines are certainly all very elegant and light in alcohol, at around 13.5⁰

2013 Carignan 1903, Côtes Catalanes – 36.00€
Pure Carignan.  This wine has been made since their first vintage.  They pulled up one of four plots in 2013 and replanted by massale selection.  Part is aged in vat; part in foudres.  A certain richness and power, but not heavy, with freshness on the finish.  A tannic streak.  Very mineral.  Very Carignan and long.

Marjorie admitted that it used to be 15.5⁰ and aged in new wood: on s’y retrouve plus.  Their wine style changed, the whites in 2010 and the reds in 2011, initially by accident.  They thought they had picked too early, but you can learn by your mistakes.  Their aim is to have a style that is unique to their estate; their style maison. 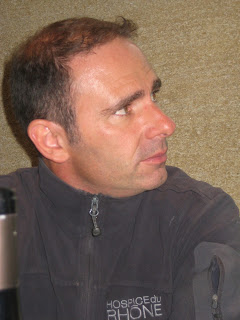 2013 Las Trabasseres, Côtes Catalanes.  – 50.00€  12⁰
The name of the lieu-dit; it means traversée par un chemin, or crossed by a path.   Schist and stony, with virtually no soil; most of their vineyards have no more than 50 cms of soil.  Quite a deep young colour.  Marjorie made comparisons with Burgundy; the hautes coteaux are more mineral and the mi-coteaux more powerful.  Very intense sour cherries.  Quite solid, quite intense youthful fruit.  A firm streak of tannin.  Quite powerful;  not heavy and plenty of nuances. Only in vat.

2014 Maury, Fagayra rouge – 28.00€
Apparently Fagayra means resistant in Arab, and Moors were of course in the region in the 8th century.  Or it could mean fougères or heather, but there is not much of that in the area.  2008 was their first vintage of  this cuvée, and as a Maury it has to be vinified in Maury.  Grenache noir on calcaire and schist.  Red fruit. Very rounded ripe and quite sweet with black and red fruit  16.5⁰ and 88 gm/l of residual sugar.  Picked early.  Muté sur grains.  Indigenous yeast with a slow fermentation for half the wine.  Maceration of fruit rather than alcohol.   Very fresh; very garrigues.

2013 Maury Grenat, Op Nord – 32.00€
Grenache with 5 – 15% Carignan depending on the vintage.  On pure schist.  The same vinification as the previous wine, but more concentrated with more depth, but not heavy.  A lot of fruit, and the same amount of sugar.  The differences come from the soil, rather than from the effect of the addition of  Carignan.

Marjorie commented that Maury Sec is doing well, and is seen as a cru of the Côtes du Roussillon Villages.  It was indeed one of the villages before obtaining an appellation in its own right.  Maury is a great terroir for Vin Doux.  There is a risk that Maury Sec will kill Maury Doux.  If the best plots are used for Sec, that could weaken the Doux.  Will Maury Doux still have the same quality in ten years time?  Personally I do sincerely hope so.

2014 Maury Blanc -28.00€
A blend of Grenache Gris and Blanc, with some Macabeo and a little Carignan blanc, which should not be in there, but never mind.  Initially picked separately, but now all picked together, depending on the ripening of the earliest variety.  Peachy nose and more pineapples on the palate.  Fermented in vat – no wood.  A mineral note.  Some acidity.  A salty note.  The alcohol is nicely integrated.  108 gms/l residual sugar.  The ph drops with concentration.

And then we chatted over a delicious lunch of local charcuterie and a variety of cheeses.  Stephane comes from Normandy, which is not known for its wine, and he drank his first wine at the age of  24.  Roussillon is a diversity of terroirs, with an equal diversity of vignerons.  It is not just vins de soleil.  Roussillon has been moving and developing for fifteen years, it really only has 15 years of history.

And we finished with a 1969 Rivesaltes, made before Marjorie was born.  They bought the barrels two years ago, one 120 litres and one 225 litres, after tasting them and bottled the wine in November 2014. It was absolutely delicious; I adore this sort of wine and cannot understand why not more of it is drunk.  There were dry figs and nuts, with lots of subtle nuances, balanced by a firm biting acidity, a wonderful energetic drink.