AN IMMERSION IN THE LANGUEDOC 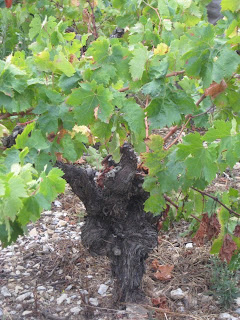 Our tasting group came to stay. We are a group of six, three and a half Masters of Wine – you trying taking a tasting exam with hay fever – a wine merchant, and my husband who proudly proclaims himself a customer. We meet up in London once a month or so to taste half a dozen wines blind – it usually proves an educative, as well as humbling experience – and then we finish the bottles over a convivial dinner. The others don’t know the Languedoc very well, so we suggested some blind tasting chez nous over a long weekend.

Easy Jet to Montpellier was late, so we revived their spirits with a glass of Verena Wyss’s Vin de Fête, a soft peachy sparkling Viognier. And then it was down to some blind tasting – six reds for the first evening.

2007 Campredon, Montpeyroux from Alain Chabanon. A blend of Syrah, with some Mourvèdre, Grenache and Carrigan. It was ripe and spicy, perfumed and supple with soft tannins.

2006 Domaine Daniel le Conte de Floris, Cuvée Villefranchien, which is mainly Grenache Noir. This was solid and meaty, dense and ripe with some furry tannins. A concentrated mouthful.

2008 Mas d’Amile, Vin de Pays de Mont Baudile – a pure Carignan from Montpeyroux, from a hectare of very old vines. Some lovely peppery fruit on the nose, and fresh peppery spice on the palate, with a streak of tannin. Elegant, and one of our favourites, from an estate that is the second newest and second smallest in Montpeyroux. (More to come on a future posting).

2003 Faugères, la Maison Jaune from Jean-Michel Alquier
Deep colour; a solid dense nose, with hints of chocolate. The palate is dense and concentrated, warm with some furry tannins. This was the year of the heat wave and I think it shows in the wine.

2005 Domaine de Cabrol, Vin de l’Est, Cabardès
Quite a deep colour, with fresh peppery notes on the palate. Quite elegant and finely crafted. Cabardès is where east meets west, so the appellation includes both Bordeaux and Mediterranean grape varieties. Vin de l’Est is predominantly Syrah, whereas the estate’s other cuvée, Vin de l’Ouest is more bordelais in style.

Then we opened a bottle of Domaine Ollier Taillefer’s Faugeres blanc, Allegro 2007, which is a blend of Vermentino and Roussanne. It had developed with a little bottle age and has filled out nicely on the palate, with some lovely textured fruit. And for a sweet taste on which to finish dinner we had Domaine de Bourdic’s Muscat, 2009 Côtes de Thongue, which was lightly sweet and grapey, with some pithy orange notes and a fresh finish. 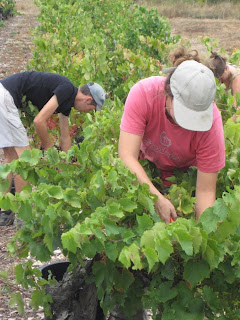 The next day saw us out in the vineyards on a balade vigneronne with Alain Ollier. The pickers were at work, and then it was back to the cellar to taste some fresh grape juice – Roussanne and Syrah, and to watch the destemmer at work. Françoise Ollier conducted a tasting in her inimitable cheerful manner, and the wines were served with local charcuterie and tomatoes from their garden. (More details in future posting). 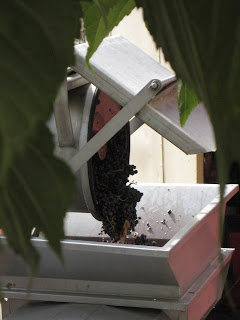 In the afternoon we went over the hills to Bédarieux, to Domaine de Clovallon, where Catherine Roque and her daughters, Alix and Delphine received us. We tasted Aurièges, the young Pinot Noir as well as Pomarèdes and her two cuvées of Faugères. Tasting notes in an earlier posting.

And before dinner that evening, we tasted a range of white wines, as follows:
2009 Picpoul de Pinet, Domaine Félines Jourdan, from one of the leading producers of this appellation. It is fresh salty and sappy, with good acidity.

2009 Domaine Belles Pierres, Cuvée Mosaique
Damien Coste has developed a reputation for his white wines; this is a blend mainly of Sauvignon, with some Viognier, Grenache and Muscat. The nose is quite perfumed, with some peachy hints of Viognier, with a rounded palate and a dry finish.

2008 Domaine des Conquêtes – a blend of Chardonnay, Chenin blanc, Grenache blanc and Vermentino, which are aged in barrel for twelve months. I have preferred earlier vintages of this and found the oak to be quite aggressive with rather a solid palate, that lacked charm.

2007 Domaine Pas d’Escalette. This is a blend of Carignan blanc, Terret blanc and Grenache blanc from one of the most northerly vineyards of the Languedoc, in the hills north of Lodève. The wine is aged in oak and the oak is still quite present on the palate. However, there is also a delicious freshness and acidity, as befits a northern vineyard. Drinking nicely now, but with plenty of ageing potential. Watch out for a posting on this up and coming estate.

2008 Domaine de Centeilles, Côtes de Brian – one of the vins de pays of the Minervois.
This is an experimental wine from some old grape varieties. It was full and rich, with resinous textured notes, and lacking in acidity. A touch of stewed apples on the finish.

2005 Domaine de Ravanès, Coteaux de Murviel, le Renard blanc.
Quite a deep colour, with a tarry, oaky nose. A rounded rich palate, with good acidity. Maybe the oak needs a bit more time, but the wine is nicely crafted and satisfying And for dinner we drank 2006 Pomarèdes from Domaine de Clovallon, and delicious it was too. Beautifully mature and everything that a fine Pinot Noir should be.

We had a day off on Saturday – Pézenas market and the fabulous Millau bridge called, not to mention the handbag shops of Millau. And friends came for dinner, including Simon and Monika Coulshaw from Domaine des Trinités, so naturally we opened some of their wines, but first we had some Blanquette de Limoux from our friends Caryl and Jan Panman at Domaine Rives-Blanques, and bottle of 2009 Le Canon du Maréchal, a Muscat Viognier blend from Domaine Cazes. Then we compared two of Simon’s wine from his first vintage, the 2007, la Devès and les Maurels, a Coteaux du Languedoc and a Faugères, respectively. La Devès had more structure with some lovely spicy fruit, while les Maurels was beautifully perfumed. Then, for fun, we tried of a bottle of 2008 from our friends, Lizzie and Ali, in the village, which has retained its fresh youthful fruit.

A week or so ago, Guilhem Dardé from Mas des Chimères had given us a magnum of one of his very first wines, 1995 Mas des Chimères, Cuvée des Artisans. And this was the moment to open it. It was amazing to see how it developed in the glass; initially rather restrained, it became rich and leathery and beautifully mature, a wonderful example of how the red wine of the Languedoc can age in bottle. And we finished with a Rivesaltes Rancio from Grand Guilhem, with the lovely nutty notes of good Rancio.

You may observe that we seem to have been ignoring the rosés, but not so. They were tried at lunch time; Domaine Bourdic's fresh wine; a substantial but elegant Roc d’Anglade and a fruity Domaine la Clapière.

There were two more wine visits; Françoise Boyer at Domaine la Croix Belle very kindly opened her cellar for us on a Sunday afternoon, and introduced the group to the Côtes de Thongue.
And Sunday evening saw us at our favourite local restaurant, the Presbytère, in Vailhan, trying Domaine Turner Pageot’s two white wines, Le Blanc and la Rupture, as well as Plaisirs from Domaine de Monplezy. See previous postings.

And Monday morning Arnaud Deville gave us a comprehensive tasting of the wines from Domaine de Nizas,(again more information in an earlier posting) including the 2006 Vin de Pays d’Oc Réserve, a blend of 50% Petit Verdot, 30% Cabernet Sauvignon and 20% Syrah. The wine is rich and cedary, intense in flavour, and elegant in structure, with some spicy fruit.

And then it was on to the Bistrot d’Ariane in Lattes, ‘our departure lounge’ for the airport, for a 2008 Terret Blanc, Vin de Pays de l’Hérault from Domaine la Fadèze, with some fresh sappy fruit, and a full flavoured rosé, 2009, from one of the leading estates of the Pic St. Loup, Clos Marie.

I think eyes were opened as to the quality and variety of the Languedoc – I found it fascinating to taste blind wines that I thought I knew quite well – it certainly helps to blow away preconceptions - and more importantly we had enormous fun – and if you are wondering, 33 bottles went to the bottle bank this morning!
Email Post