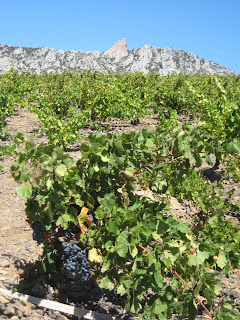 I caught up with Katie Jones (see an earlier blog) in her vineyard in Maury, in the heart of the Pyrenées-Orientales. It is wonderful - vineyard scenery at its most dramatic and wild. Katie explained how she was looking for a small mazet, a little stone hut, and what she actually bought was four hectares of vines, and no mazet. She was brought to see the vineyards and it was a coup de foudre at first sight. 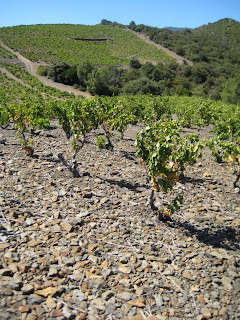 She has kept 2.7 hectares, some Grenache both Gris and Noir, some Muscat, wired off to protect the grapes from the ravages of the wild boar, who are particularly partial to sweet juicy Muscat, and some old Carignan, just 500 vines. Her vines are between 70 and 20 years old. And the soil is the dark schist of Maury. There is a view of Tautavel in the distance. I could quite see why she succumbed – and you can always build a mazet. 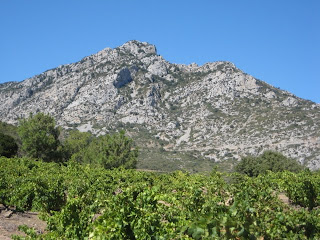 Then we went back to Tuchan where she has her small cellar, which she refers to as the Vatican, for the simple reason that it is in the rue du Vatican. It is an old barn and a year ago it had no electricity, vats or press, and the floor was dried earth. The floor has been concreted and stainless steel vats and a few, well two, barrels have been installed, one new and one that has just been used once. We tasted her red 2009, bottled at the end of July. It has a good colour, with some spicy cherries on the nose. There is a stony minerality, some raspberry fruit, and also underlying warmth, with a fresh youthful structure.

The 2009 Carignan is still in barrel; the nose was quite rounded and chocolaty, with a fresh palate, with a touch of oak, with some acidity and tannin and some spicy fruit. Katie reckons she will bottle it at the beginning of next year as Jones Reserve. 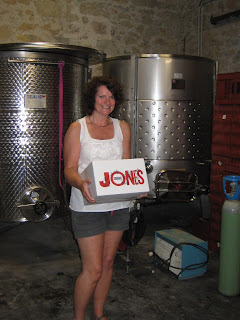 She has also bought a small plot in Tuchan, some Carignan and Grenache Noir which are planted together, and just 60 ares of Syrah. She has registered to make Fitou, but with a potential production of about 1500-2000 bottles, this will make her the smallest producer of the appellation. There is no doubt that her enthusiasm is infectious. 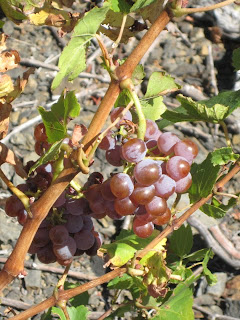