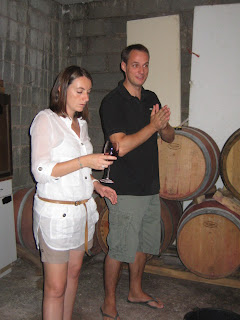 I love following the progress of new young wine growers. I first tasted Amélie d’Hurlaborde’s wine at the bi-annual fête in Montpeyroux last year. Mas d’Amile was a new name for me, and my curiosity was immediately aroused, as the wine was delicious, so a few weeks later went for a cellar visit, and then went back again last week for an update.

Amélie, and her brother Sébastien, have taken over just one hectare of old Carignan from their grandfather. Her husband, Jérôme, who works for Jeanjean, also lends a helping hand. She explained that Mas d’Amile is the second newest and second smallest wine estate of Montpeyroux, with just over a hectare of old Carignan vines. The growth of Montpeyroux has been extraordinary. When I first visited the Languedoc in the mid-1980s, Montpeyroux was dominated by its cooperative – there were virtually no independent wine growers - but since then there has been amazing growth in the number of small wine growers – with people such as Sylvain Fadat and Alain Chabanon as pioneers, followed by Claude Serra, Jo Lynch at Villa Dondona and several others, so that there are now about 20 estates. Amélie admitted that it is quite difficult to acquire vineyards in Montpeyroux – it can depend on who you know. Montpeyroux is a very closed community, but also a prosperous village, unlike many of the Languedoc. She called it an island of prosperity.

Her cellar was her grandfather’s garage, by his house on the edge of the village. It is very compact, with just enough vats and barrels for about 30 hectolitres of wine. Amélie is very enthusiastic about Carignan, feeling that it is not properly appreciated. And as a pure Carignan, her wine is a Vin de Pays du Mont Baudile, rather than an appellation. We began our tasting with her oldest, and first, wine, the 2007. The nose is perfumed and fresh, with raspberry fruit on the palate, and a lovely balanced of fruit, acidity and tannin. They only took over their vineyard in March that year and consequently were only able to prune relatively late. However, this they have continued to do, which means that their harvest is always late too, with the advantage of getting really ripe fruit, with a slower ripening. 30 % of the wine was aged in barriques, and 70% in vat for the 2007, whereas for the 2008, the proportion is half and half, with some American as well as French oak.

Why American oak? I asked. They had acquired a barrel from Ogier (part of the Jeanjean group) and as Carignan can be relatively reductive, American oak is considered to be suitable for it, with the American oak drying the fruit less than with the French oak. The 2008 has a good colour; the nose is more perfumed and richer than the 2007, and the palate more rounded, with an attractive tannin structure. For this vintage they had cooling equipment, and also did a serious vendange vert.

And then we had a barrel sample of 2009, which will be bottled at the end of October. I found this beautifully aromatic, with fresh raspberry perfume. And the wine in the American barrel seemed more rounded on the nose, with more structure, and not obviously American. Now they are wondering about a tronconique vat for the fermentation.

They have projects; they would particularly like to try Grenache and work out its typicity. 'The Languedoc is blessed', Amélie observed, 'and the vines do not suffer'. There is a wonderful variety of soil around Montpeyroux. And the potential is enormous. I didn’t meet Sébastien as he also works for Alain Chabanon and was busy picking Grenache that morning, but there is not doubt that he and Amélie, with Jérôme’s support, deserve to go far. 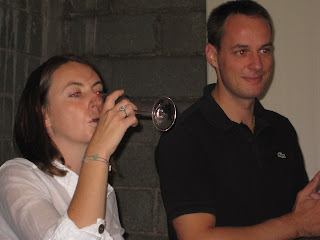 Graham said…
Very much enjoyed several bottles of the 2007 last year - full of elegant guts and a bargain at 7 to 8€. I look forward to trying more recent years. A pity it isn't easier in this modern world to find where these gems are available.
23 September 2010 at 18:31