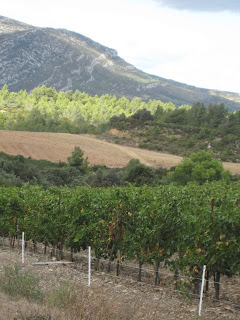 Laurent Miquel has a new project. He is better known for award winning Viognier and Syrah from his family estate of Château Cazal Viel in the appellation of St. Chinian, but early last year he was looking for office space, which for some reason took him to Domaine des Auzines in the hills above Lagrasse in the Corbières. It was a coup de coeur at first sight – and I can quite see why. It is a fabulous spot. You take a winding road that climbs out of the pretty village of Lagrasse, with its Roman bridge, up to a plateau, where there is a cellar and a house, vineyards, garrigues and more land waiting to be planted.

Laurent and his Irish wife Neasa are really excited. It is such a contrast to St. Chinian. The atmosphere is very different, much cooler, and with greater extremes of day and night time temperatures. At the height of summer you could get 39°C by day and 15°C at night – and it is windy. Altogether there are about 200 hectares, with lots of garrigues, and just 14 hectares of vines in production. Laurent explained that he had only kept the Syrah, and some Grenache, and had pulled up a lot of vineyards. They were not in very good condition; indeed the property has suffered from a series of owners, four in the space of ten years. 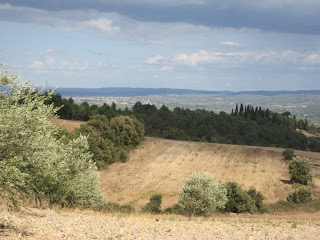 And Laurent has a serious plan in mind – to plant Albariňo, which is best known as the white grape variety of Galicia in the north west corner of Spain. So far there is none in the Languedoc, so it is an exciting challenge. You have to get permission to plant obscure grape varieties. Albariňo is a variety that nobody in France knows, so they have no preconceived ideas, and he got the necessary authorisation in just three weeks, which sounds like a miracle for French bureaucracy. It’s a question of who you know. Laurent’s father was one of the first to plant Syrah and Viognier in the Languedoc, and the people he dealt with locally back in the 1970s, for that pioneering step, are now working in high places in Paris. 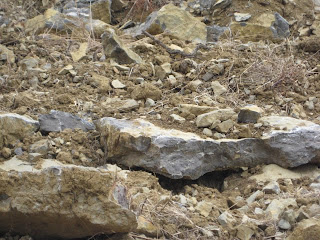 We went for a walk round the property and Laurent talked of his plans. It had taken two months to get rid of old vines roots, as the soil is so hard and stony. They did make some red wine in 2009, with a yield of just 15 hl/ha. The wild boars were a big problem. Now he has electric fences, so they eat the neighbours’ grapes instead. He talked about the need for water, and how they employed a walker diviner, who was much more accurate than the water geologist. They also have a project for drip irrigation under ground, which reduces the water consumption. He is full of enthusiasm. The first Albariňo vines will be planted next spring, probably about ten or fifteen hectares as a start and the vines will probably come from Portugal. Whereas the previous owners made only red, Laurent is looking at other white varieties, maybe Sauvignon blanc, or Sauvignon gris, or Grenache gris, and also Viognier and Chardonnay. He is convinced that the cool nights will be good for white wine. And when might we taste the first Albariňo of the Languedoc? Maybe 2014 – 2015, if all goes well. 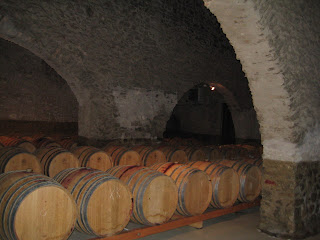 Meanwhile we got to try some Laurent’s current wines, some new releases for the UK market, and mostly from his vineyards in St. Chinian. Thanks to Neasa’s marketing expertise, their wines sell well on the UK market.

2009 Laurent Miquel Viognier Nord Sud - Majestic - £8.99
From a selection of vineyards that are planted north south, with about 30 % fermented in oak. The nose is quite solidly oak, but with a fresh palate. Quite structured with good acidity, and fuller than the Vendanges Nocturnes.

2008 Laurent Miquel Viognier Vérité - £14.99 at Waitrose
The best Viognier possible. All fermented in oak, with some demi-muids as well as barriques, and with a selection of juice as well as plots. Rounded, textured, peachy, integrated oak and more depth of flavour.

And then we tried some Syrah:

2007 Laurent Miquel Nord Sud Syrah, Pays d’Oc - £8.99
Solidly perfumed, spicy fruit, quite rounded and mouthfilling. Some barrel ageing, including American oak. I wasn’t sure about the American oak – it made the wine too ‘Australian’ for my taste buds.

2007 St. Chinian l’Artisan - Majestic - £9.99
A blend of Syrah and Grenache, from Château Cazal Viel, which is just outside the village of Cessenon. Deep colour, perfumed nose with some spicy fruit and tannin on palate. Peppery notes, youthful and medium weight.

2008 Château Cazal Viel, Cuvée des Fées – from Syrah, with just a touch of Viognier, just 5 - 8 %, which means that it can’t be St. Chinian. Medium colour, fresh and elegantly perfumed nose; quite fresh and peppery on the palate, with perfumed fruit. I really enjoyed this. £11.99

2006 Faugères, Saga Pegot, which is the name of the vineyard plot. It means a large grasshopper In occitan. Pure Syrah, grown in schist. Firm, dense oak on the nose; youthful ripe and rounded. with a touch of minerality on the palate, after eighteen months élevage in oak. Long and serious. £13.99

2007 St. Chinian Bardou - Syrah grown on clay and limestone. Quite solidly dense and oak, on both nose and palate, with some intriguing perfumed. A fascinating comparison of the effect of different soils on the same winemaking techniques. The Faugères is softer and more supple.

We finished with a few barrel samples, including the 2009 Corbières from the property, a blend of 80 per cent Syrah and 20 per cent Grenache Noir, with a deep colour, fresh youthful tannins and perfumed fruit, and plenty of promise. 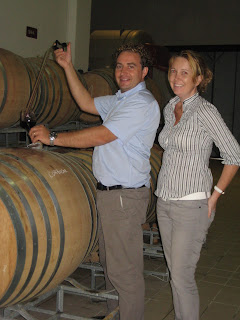