WINE IN THE ARIEGE 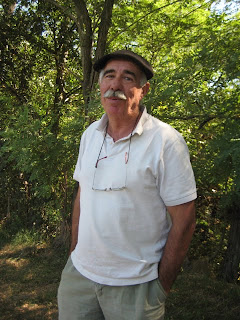 And now back to the Ariège, as promised a couple of postings ago. Unlike the Languedoc, the harvest there will not start until early October.

The Ariège is one of the lost departments of France, nestling in the Pyrenees between the departments of the Pyrenées Atlantique and the Pyrenées Orientales – so in wine terms between Jurançon and Madiran and the robust wines of Roussillon. Foix with its magnificent castle is the main town of the region.

We spent a fascinating couple of hours with Philippe Babin from Coteaux d’Engraviès in the village of Vira, between Foix and Mirepoix. He explained that in the 1920s there had been 20,000 hectares of vines in the Ariège, but that these had disappeared as the economic activity of the region had changed, so that it had become one of the few departments of France not to have vines, and certainly the only one in the deep south.. It was once a region of small mining communities – and mining is thirsty work – the miners consumed seven or eight litres of wine a day, wine that was low in alcohol, more like beer, and in today’s terms, probably pretty undrinkable. Although the 20,000 hectares were scattered pretty well over most of the department, there were two areas that were considered better than the others, the valley of the Lèze to the south west of Toulouse, and the valley of the Douctouyre, which means a torrent doux, or sweet torrent, where Vila is situated. A wine called Coteaux d’Engraviès was apparently offered to the English court by Philippe IV, le Bel, who was the father of Eleanor of Aquitaine. The nearby town of Pamiers was a river port, sending wine along the Garonne to Bordeaux.

Philippe explained how the Swiss owner of the Domaine de Ribonnet in the Haute Garonne, near Toulouse, Christian Gerber, had encouraged the development of the new
vineyards of the Ariège, leading Philippe to plant his vines in 1998. He had been farming wheat for thirty years and he admitted, that he had the enthusiasm and motivation, but no savoir-faire. And that is what Christian Gerber supplied, for him and three other associates, each of whom planted ten hectares. Two cellars were set up, at Lézat-sur-Lèze and Montégut-Plantaurel, so that he takes his grapes to nearby Montégut.

We ate rounded his kitchen table and chatted and tasted. He has five hectares of Syrah, 2.5 hectares of Merlot and 2.5 hectares of Cabernet Sauvignon. I wondered why there was no Pinot Noir, as Limoux is not so far away. Philippe grinned and admitted that he had just planted 60 ares, but it is not on the list of permitted grape varieties for the Ariège, that some ignorant fonctionnaire had compiled, who probably knew no more about it than he did. He is also considering Chardonnay and Petit Manseng for some white wine. Before phylloxera Gamay was one of the most widely planted varieties in the Ariège and then in the 1920s it was mainly hybrids. However, INRA, the national research organisation, is looking at some original varieties that may have come from the Ariège. Tortozon, Berdomenec, Carnaris, Camaret de Lasseube and Mandrege were certainly new to me. The plan is to start with five vines of each variety and gradually increase to 500 vines of each, which will give enough for some trial vinifications. It will probably be about 2017 before Philippe actually makes any wine from these historic varieties.

His first vintage from more conventional grape varieties was 2000, when he had three hectares in production, which gave him just 15 hectolitres. 2009 was rather better, with a crop of 250 hectolitres. I observed that he was courageous, which he denied. Non, c’est passionant. And then he opened a bottle.

2009 Dimanche à la campagne, Vin de Pays de l’Ariège – 5.90€
This is a blend of 60% Syrah and 40% Merlot. The name immediately set the tone, it has rounded fruit with soft tannins, and a fresh lift on the finish. A perfect picnic wine, and quite delicious.

2007 Roc des Maillols – 7.95€
A blend of 60 % Syrah, 20% Merlot and 20% Cabernet Sauvignon, given twelve months ageing in old barrels, more for oxygenation than for the wood effect. There are some peppery notes from the Syrah, with some red fruit; the tannins are quite firm and the palate medium weight. Philippe observed how the area is at a cross roads, not just between the Atlantic and the Mediterranean – for those transitional appellations of Cabardès and Malepère are not too far away – but also there is a strong influence from the mountains. His vineyards are at an altitude of 350 metres, in eight plots.

And then we went to see the vines, on gentle slopes, with a river flowing at the bottom of the valley through the village. He practices organic viticulture, so no fertilizers, or pesticides and everything as naturally and simply as possible.

Philippe Babin is keen to create something that represents the Ariège, and also something where he is in charge and sees the finished product. You don’t get that satisfaction with wheat. He is very dedicated and he deserves to succeed, and gradually he is gaining local recognition, and even further afield. Unknown said…
Hi Roesmary George,
I am researching a novel largely set in the Ariège and also in a fictitious Medieval village just south, in the Pyrenees. I was fascinated by your blog on this area. I plan to visit this fall and am seeking a small vineyard to see as well as the name of a guide. Do you have any thoughts on this?
Thanks. Jonathan M. Ross
jonathanrossnovels@gmail.com
20 May 2014 at 23:43