There were some pretty depressing headlines for wine growers in the Midi Libre last month – La désespérante dégringolade du revenu des viticulteurs – for which a loose translation might be the desperate collapse of the revenue of the wine growers. The article gave the figure of 41,675 for the number of hectares pulled up in the region since 2004, while the overall revenue for farmers had dropped by 47% and for wine growers, more specifically by 66.5%. It makes pretty gloomy reading.

And yet individual optimism prevails. There is no end to the number of new estates being developed in the region, and to the number of people who are prepared to invest time, money, energy and enormous commitment to producing wine, and they are often people of relatively modest means, without the financial backing of money made in other fields. They need the day job, or one of the couple has another job away from wine. But they are passionate about what they doing, determined to fulfil their dream and are not deterred by the adverse odds, and indeed the current economic climate.

Take two small examples. My village is not known for its wine quality – indeed the local cooperative plummeted to a new depth of ‘quality’, with bottles that we deemed not fit for the vinegar mother. And there are hardly any independent wine growers in the village. So the example of Eric Morot is an inspiring one. He came south from Paris some fifteen years ago and bought some vines, just six hectares, and then last year he decided to take the plunge and withdraw his vines from the coop and turn vigneron, from viticulteur. In 2009 he made just 5000 bottles in his cellar, an old barn, hence the name of his wine Vin de la Grange, Cuvée l’Ambrin, after his two daughters, Ambre and Marin. He hasn’t bothered with the hassle of bureaucracy so it’s a simple vin de table, and a great start, with some cheerful peppery fruit, and just 6.00€ a bottle.

Rather more ambitious are Patrick and Nathalie Goma at Domaine des Couleurs en Terres, just outside Pézenas, down the road from the Prieuré de St. Jean de Bébian. Patrick explained that he is self-taught. His parents were farmers in the Gers, where they had cows and grew maize and also some grapes. He has a farming qualification, but specialised in élevage, rearing cattle. When he arrived in the Languedoc in 1985, he went to work with Bertrand Jany at Domaine Condamine Bertrand. Nathalie is a qualified winemaker, and studied in Paris and then Montpellier, and also worked chez M. Jany, which is how she and Patrick met. 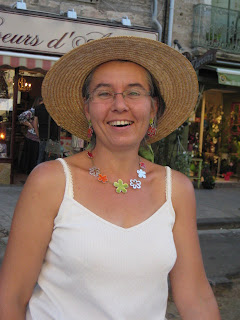 Patrick now works at Domaine Verena Wyss and Nathalie has a job at the Chambre d’Agriculture, and in the evenings and on weekends they work hard running their own small estate. They bought three hectares of abandoned vines in 1996, and replanted the old Carignan, Terret Bourret and Aramon, for Grenache, Syrah and Roussanne as well as some Muscat, and they also have a little Vermentino and some old Cinsaut. And their cellar and adjoining house, they have built themselves. They sell some of their grapes, which helps the cash flow, and aim to produce about 2000 to 3000 bottles a year, but only started selling in bottle with the 2007 vintage. Their labels depict paintings by Nathalie’s mother, conveying the wonderful colours of the Languedoc, and the inspiration of the name of their estate.

2009 Roussanne Vin de Pays d’Oc– 7.50€
Light golden. Delicate, fresh nose. Elegant white blossom on the palate, with a satisfying mouthful and a harmonious finish. The wine making is finely tuned, with some bâtonnage, and they take care to avoid any oxidation. Fermentation is in small vats at 16-18°C. 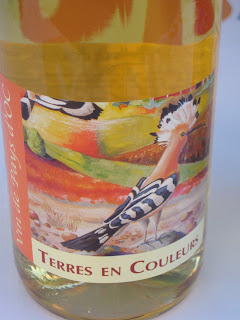 2009 Muscat à petits grains, Vin de Pays d’Oc – 8.50€
Golden in colour. Quite spicy, with the fresh grapiness that good Muscat should have, with a fresh pithy orange note on the finish. Nathalie suggested goats’ cheese or asparagus as an accompaniment. 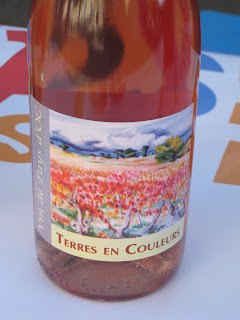 2009 Rosé, Vin de Pays d’Oc – 5.00€
Cinsaut, with some of the related variety Œillade. A pale orange pink, with a delicate nose, and rounded raspberry fruit on the palate. Elegant and harmonious.
And then we tried what they call the Inspiration of the Year, made from later picked Cinsaut and vinified with some of the larger lees, and aged in barrel. It was rounded and mouthfilling, with a touch of oak, and quite solid dry palate. And quite intriguing. 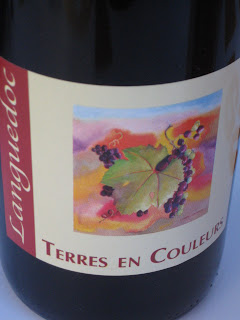 Nathalie and Patrick work hard, selling their wine locally, in a modest way. No high-powered marketing plans for them. You will see them at the local fêtes, the Fête de l’Oignon doux at Lézignan la Cèbe, the Saturday morning marché vigneronne inthe rue Anatole France, in Pézenas, or at the weekly Estivales, on a Friday evening in Pézenas, when the cours Jean-Jaurès is closed to traffic to create one large street party with the local wine growers offering tastings and selling their wine. It is hard work and they deserve to succeed.

AlanM said…
Well that was a surprise. I was lucky enough to taste the Vin De La Grange at the village Syndicat d'Initiative on one of their Monday evening tastings. I was unaware that said village was your own it must be said.
The tasting was a useful reminder that there is still a fair amount of dross around even from one of the biggest names in the area. The one shining light was the de la Grange. The red was the only one for tasting (I can't recall if there are others?) and it offered fruit, perfume and lingering flavours. I will definitely be paying a visit next year as, unfortunately this year's tasting was the night before we left.
24 September 2010 at 17:22

Rosemary George MW said…
Francoise Ollier (Domaine Ollier Taillefer) was there the evening we went, and her wines are always worth tasting, though her 2008s are affected by hail damage.

AlanM said…
I'm a big fan of Ollier Taillefer Rosemary. We visited and Francoise was very accomodating. Like you we had one of their Reserves at New Year too.
25 September 2010 at 21:44

Rosemary George MW said…
Alan - do tell me who was providing dross on the evening you were at the Syndicat tasting. Best reply direct to my email :
rosemary@georgemw.com rather than character assassinating someone in public!
6 October 2010 at 12:00

Unknown said…
Not to be confused with Domaine de la Grange. That one has a strong financial and commercial backgroud to support its development. And most importantly Domaine La Grange has a great team to realize its ambitions of producing "Grands Vins du Languedoc" with a talented young winemaker and an experienced "Chef de Culture" who has been working 20 years on this spectacular vineyard. We definitely do not produce any "dross wines" here. Rosemary, please help us to avoid any confusion. This would be so unfair to our people and good quality wines!
11 October 2010 at 10:26

Rosemary George MW said…
Sandrina - I've discovered your comment. I think the similarity of two names is unfortunate, as there is certainly room for confusion locally. The name of your estate outside Gabian presumably dates back some time whereas Eric named his wine as he made it in a old barn. However I think your two markets are quite different and as you say, you benefit from solid financial backing and some sound expertise in vineyard and cellar. I certainly wouldn't accuse you of producing 'any old dross' - and there is no interest in writing about estates that do. For me, yours is 'work in progress' and I would like to see how things develop.
15 October 2010 at 17:47

Unknown said…
A person who is optimistic is a successful one in terms of career, love and family it is because he never quit in any situation thus continue to strive harder to meet his desired goal. Visit my site for more information. Thank you and keep on sharing your thoughts to all of your readers.