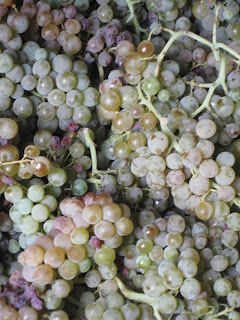 It’s early September and the harvest in the Languedoc is getting going. Our friends Deborah and Peter at Mas Gabriel in Caux picked their white grapes on last Friday morning, so we went along to help, or hinder, and observe. My experience of wine-making is distinctly limited. I know the theory but have never actually got my hands dirty, so I was keen at least to have a look. Their white wine is mainly Carignan blanc – that is what it is labelled – but in the vineyard there is also a bit of Grenache Gris and a little Viognier. The bunches are quite different; the Viognier is tight bunched, while the grapes of the Carignan are much looser and longer, and the Grenache gris has pink, indeed almost red skins. 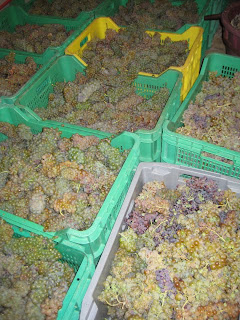 We arrived just as they were getting the destemmer going. There had been a small technical hitch earlier when they had discovered that the cooling drapeau, which sits in the fermenting vat was leaking some water at a joint, but that was soon sorted. They have a basket press, which is very gentle, and therefore sometimes leaves whole berries unpressed, so they have evolved the technique of destemming their grapes and then adding layers of stalks to provide drainage channels. And that was what we did. The grapes were beautiful, a translucent gold colour, and beautifully healthy, with not a trace of rot to be seen. Peter has a new toy, for making dry ice – to protect the juice and grapes from oxidising. He was busy applying this to the press, which had the effect of making it look rather like a witches’ cauldron, as white vapour filled the small cellar. 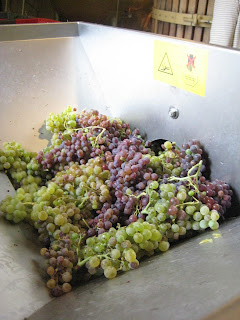 You realise quickly that there is an enormous amount of physical effort involved; nor can you rush. Everything takes its time. We filled the destemmer and then we filled the press, with large buckets of grapes, and then added a thick layer the stalks. By now the press was pretty full, so a first slow gentle pressing made space for more grapes, and some juice was pumped into the fibre glass vat, and more dry ice was added. The cap to the outlet of the press got stuck – Peter was thrilled. He had bought a clé anglais (a possible English translation is a monkey wrench) at the flea market in Marseillan the other day for the princely sum of 3€ and here it was being put to good use to sort out a tricky complication. 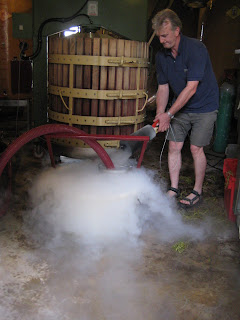 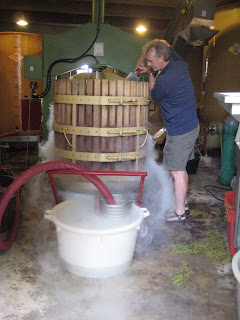 We had an appointment at the Prieuré de St. Jean de Bébian, so had to leave the workers adding more grapes to the press. The juice would be chilled over night, with the addition of a drop of sulphur and by morning would be beautifully clear, leaving a layer of sludge of lees in the bottom of the vat, and the fermentation would get going. I was fascinated by the attention to detail, of the things that you would not consider unless you have actually used wine making equipment. A basket press is all very well – in fact it is a great little press, but there are gaps between the staves of the ‘basket’ so when the pressure increases, grapes squeeze out between the staves and go everywhere you do not want them. The solution is to wrap some thick plastic sheeting round the basket, which keeps everything under control. We later learnt that putting whole bunches round the inside edge of the basket also had the desired effect. Nor had they finished pressing until nearly 11 p.m. Was I relieved that I had another appointment that afternoon!
But I think I’ve let myself in for helping with some red wine making later in the month, so more on that experience anon. 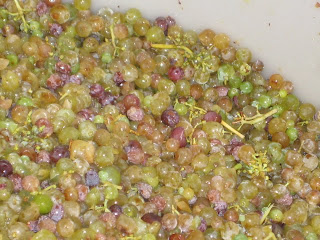 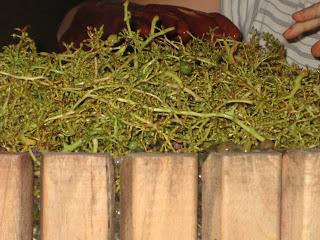 Graham said…
I've just re-read this after nearly a year and it remains a delightful and informing account. The only difference I can report with 2011 is some fine tuning of the press layering technique - stalks down the sides as well. Peter and Deborah also bought some new cuves (delivered with a day to spare) so they could pick over two days and avoid the 11pm finish.
Sadly there will be fewer bottles (of the white) this year as the grapes were smaller on many of the vines.
27 August 2011 at 17:13

Unknown said…
This is an informative post review. I am so pleased to get this post article and nice collection.I was looking forward to get such a post which is very helpful to us. A big thank for posting this article in this website. Keep it up.
WINE GIFT BASKET