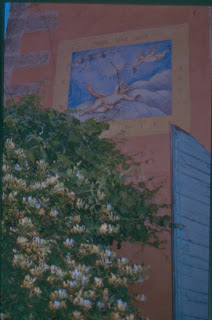 I’ve been visiting the Prieuré de St. Jean de Bébian regularly since the mid-1980s. Back then it was the property of a maverick wine maker, Alain Roux, who planted all thirteen grapes varieties of Châteauneuf-du-Pape in his vineyards outside Pézenas, for the simple reason, that the soil is identical, with the distinctive galets roulées of Châteauneuf. When I casually observed that most of the thirteen varieties did not conform to the appellation of the Coteaux du Languedoc, he told me firmly that ça n’a pas d’importance. He made thick chunky wines, with body and character, quite unlike anything produced by his neighbours, who back then were mostly cooperative members. I remember the 1985 vintage as being dense and warm, with spicy fruit. I drank the last bottle of a case not that long ago, and it was still rich and characterful.

Then in the spring of 1994 he decided to sell and Bébian was bought by Chantal Lecouty and her husband, Jean-Claude, both journalists on the Revue du Vin de France. Chantal had an enormous experience of wine, from the tasting and writing point of view, but her wine making expertise was severely limited. Alain supervised her first vintage, and as they filled the last vat, he told her that her wine was a great success and that he was leaving for Caracas that night! Chantal remembers Alain telling her that the secret of good wine making is low yields and very ripe grapes and that the rest was a load of rubbish. He had no oak barrels and his wine making was very simple. She has fine-tuned the wines at Bébian, developing the range; buying a table de tri; destemming, some but not all of the bunches, which is something that Alain never did; nor did he have any barrels, which she has introduced for both red and white wine. And the wines have developed elegance and finesse, especially in the hands of her talented Australian winemaker, Karen Turner. (see my posting on Turner- Pageot.) Bebian now totals some 33 hectares, including some very old vines, mes vieilles dames, as Chantal used to describe them.

Then Chantal and Jean-Claude decided it was time to move on, and last year some Russian investors made them an offer that they could not possibly refuse. Happily for Bébian, Karen remains as the winemaker, indeed has been promoted to wine-making director, and is left pretty much to her own devices.

We went to visit last week, with friends Alud and Maggie. Alud has been a Bébian enthusiast for years. Karen was busy with the harvest, but she took a moment off to chat and her colleague, Amandine hosted our tasting.

2009 La Chapelle de Bébian – 13.10€
This is the second wine of Bébian. A blend of 60% Roussanne, 25% or so of Grenache Blanc, and the rest Clairette. Half of the blend, including all three varieties, is fermented in wood, and half in vat. The oak is nicely integrated, with some elegant buttery notes on the palate, and a rounded, harmonious palate, with balancing acidity. A very complete wine, drinking well now, but also with future potential.

2007 Prieure de St. Jean de Bébian blanc. – 27.00€
A blend of 60% Roussanne, 15% Clairette, 10% Grenache Blanc and about 15% Picpoul. All of the wine is fermented in oak, one third of the barrels are new. and the yield is very low, 15 hl/ha. This is still a young wine that needs time. It is oaky and rich and concentrated, finely crafted, and elegant, but powerful, with enormous length on the finish.

2008 Bébian en rose – a play of words on la vie en rose - 8.00€
A blend of Grenache Noir, that is pressed and Cinsaut, which is saigné. The nose is ripe and rounded, reminiscent of raspberries, or maybe strawberries, going from one to the other. It is quite rich and ripe, with some body and weight, especially for a rosé, more a food wine than an aperitif. Maggie, who sees her wines in the form of material, rather than colours, or shapes, or fruit flavours, or whatever images you might employ, said this was lace. The two white wines were silk and velvet respectively.

2009 Bébian en rose – 8.00€
Medium depth of colour. Fuller on the nose than the 2008. A fresh palate, but more concentrated, richer and almost sweeter than the 2008. The dominant fruit flavour for me was strawberry, and the wine had a better balance than the 2008. Maggie said that it had the texture of embroidery.

2007 La Croix de Bébian – 8.00€
This is the entry level of the red wines, an easy glass for summer drinking. And a blend of Grenache and Cinsaut given a short maceration and spends six months in vat. It is light and fresh, with cherry fruit on the palate.

2007 La Chapelle de Bébian – 12.00€
Predominantly Grenache, with some Syrah and Cinsaut, and aged half in vat and half in wood. The nose has some smoky berry fruit and the palate is quite firm, with youthful tannins, a touch cassis and some dry spice. It has quite a warm finish, but is not too alcoholic. 2007 was quite an elegant vintage, with a cooler than average August.

2007 Prieuré de St. Jean de Bébian rouge. – 26.00€
This is the wine that includes all thirteen grape varieties of Châteauneuf. The blend is predominantly Syrah, Carignan, Grenache and Mourvèdre and then there is a plot of all the others. The colour is deep; the nose is solid and rounded and quite dense, and the palate is rich, with quite furry tannins, leaving a warm finish, with elegance and concentration, and also considerable length. One of those wines that keeps you guessing.

1996 Prieure de St. Jean de Bébian.
This was a treat, to show just how well Bébian can age. It is quite dry and meaty on the nose, and the palate was elegantly cedary, and very intriguing, with lots of nuances of flavour. There were leathery notes, and a cedary finish. Wonderfully appealing, beautifully mature, and a great note on which to finish our tasting. 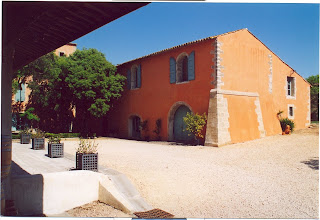 AlanM said…
White and red Charlie?
I had some of the red La Chapelle and also the main cuvée during my stay in the area this summer. I enjoyed both very much, the Chapelle was a lovely easy drinking wine with complexity aplenty for the price. The main cuvée was dense and I'm no expert so I'm guessing to some extent but it seemed to have real potential and packed with fruit.
I was also lucky enough to visit Karen and Emmanuel in Gabian at Turner-Pageot, they are already making excellent wines and as their influence on the vineyard develops I'm sure they will go from strength to strength. The whites in particular inpressed me, both the classic CdeLanguedoc and the Daguenau style Sauvignon. I'm already looking forward to next summer and a return visit.
13 September 2010 at 20:28