A DAY IN LIMOUX - Part One - DOMAINE J. LAURENS 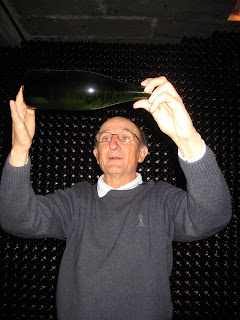 Limoux is one of the coolest parts of the Languedoc, and so it is ideal for the production of sparkling wine. On a clear day you can see the dramatic skyline of the Pyrenees; on Wednesday it was conspicuous by its absence. And this is where the vegetation of the Mediterranean meets that of the Atlantic. I needed to collect some wine for a party, so that seemed a good excuse to whizz down the motorway from the sunnier Hérault and spend a day tasting, rediscovering my old favourites Château Rive-Blanques and visiting two estates that were new to me.

First stop was Domaine J. Laurens in the little village of La Digne d’Aval. Jacques Calvel explained how he had bought the estate some ten years ago from a champenois, Michel Dervin who had developed the vineyards back in 1980 and established the style of J. Laurens. Laurens is an old family name. M. Calvel has had a career in computers – he described Laurens as his retirement job. And in my mind I made a comparison with Mike Roberts of Ridgeview in Sussex, who also sold a computing business and planted vineyards. It is clearly not retirement.

There are 30 hectares of vines; more than half are planted with Chardonnay, with a bit over 5 hectares each of Chenin Blanc, and Mauzac, the traditional variety of Limoux, as well as four hectares of Pinot Noir. Their own vineyards provide 90% of their requirements.

Limoux is divided into four zones, as there is such a diversity of microclimate and terrain. J. Laurens is in the area called Autan, which is quite cool, but wetter than the Mediterranean area. And M. Calvel, true to the champenois founder, makes only sparkling wine, which is quite rare – most people do produce still wine as well. And he produces four different cuvées. It’s all very simple. The cellar is small and neat, with vats and giro palettes and the equipment for dégorgement. However, you sense that great attention is paid to detail. Mr. Calvel talked about the harvest. They have a team of Portuguese pickers – the harvest usually starts in the middle of August and takes three weeks. They pick into 25 – 30 kilo boxes, handling the grapes as carefully as possible, but nonetheless the boxes are designed to allow any juice that might result from any squashed grapes, to escape so that it does not go into the press and spoil the wine. And when I asked M. Calvel to describe the typicity of his wine, he talked of finesse, elegance, fraicheur. He want to continue to the style of the former owner and he wants to make what he called vins droits – droit in this context is tricky to translate – I would almost suggest wines that are true to themselves and their place, that are not complicated by external influences. And on tasting his wines I would consider that he succeeds.

NV Le Moulin Blanquette de Limoux 7.50€
A very fine bead. Quite a rounded, lightly honeyed nose, with a herbal hint. A rounded palate with a fresh finish. The dosage has 10 gms/l residual sugar. The blend is 90% Mauzac with a little Chardonnay, and the wine spends a minimum of nine months on the lees; but if possible they prefer 15 months. Initially they didn’t make any Blanquette but with the drop in the obligatory percentage of Mauzac in the Crémant, there was a surplus of Mauzac to be used up. And remember that the reputation of Limoux was based on Mauzac; Chardonnay and Chenin Blanc, and also Pinot Noir came later.

2009 Crémant de Limoux, Les Graimenous – a lieu dit; apparently it means l’herbe folle, or mad grass! 8.50€
A blend of 60% Chardonnay, 30% Chenin Blanc with 10% of Pinot Noir and Mauzac. These days you can make Crémant de Limoux without a drop of Mauzac. The wine must spend 12 months on lees, but again they prefer longer if possible, up to 18 months.

Elegance was the first word that came to mind, with a fine bead, a delicate creamy bouquet and an elegant palate. There was an appealingly creamy palate, with depth and a long finish. It was very harmonious and understated, and simply delicious.

Next came 2007 Crémant de Limoux La Rose No 7. – 9.50€ Why No. 7? Mr. Calvel referred to Chanel’s No 5 and then said that 7 is a lucky number. It is a blend of Chardonnay, Chenin blanc and Pinot Noir, but no Mauzac. I noticed that my French colleague Michael Smith has described this wine as ‘cette enchanteresse cuvée’ – this bewitching cuvée. What more can I say? It is a delicate pale pink colour – they obtain the colour by vinifying the Pinot Noir part as still wine and then blending, and you can detect the influence of the Pinot Noir. There is a certain structure on the palate, with some hints of raspberry fruit, and a little more weight than the Crémant, but still with the hallmark of elegance. I was indeed enchanted.

This also contains no Mauzac and is a selection of the best juice, with a longer time on the lees. Why Demoiselles? A story about the former owner. His father-in-law and friends had helped him buy him the vineyards. Among them was a Belgium wine merchant with three daughters, or demoiselles. This was immediately richer on the nose, partly the effect of longer ageing, and also an older vintage. It was ripe and rounded, with a herbal note, creamy, with more weight, and longer and fuller in the mouth. 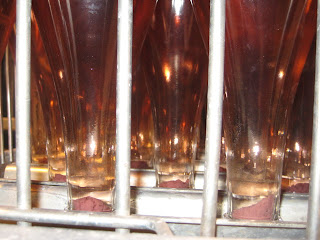